Note that these observations are my own, and are not the official specifications made by Wheelsport. Especially since different generations or batches of wheelsets can have some differences, such as a slightly different hub or rim design. As discussed in the Wheelsport Rear Hub Maintenance Guide, hubs made in different years or for different OEM customers can have different specifications such as the type of rear hub used. 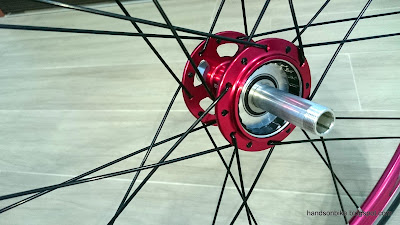 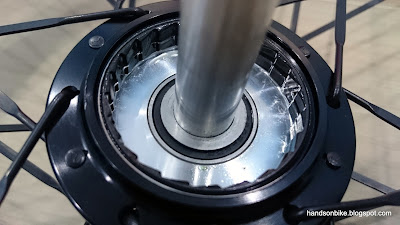 Ratchet design of the rear hubs, after the freehub body is removed. Both have similar rear hub ratchet designs. 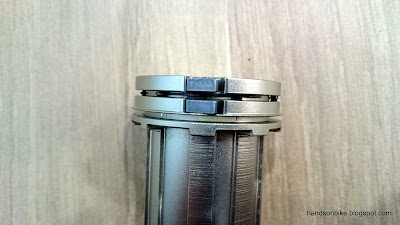 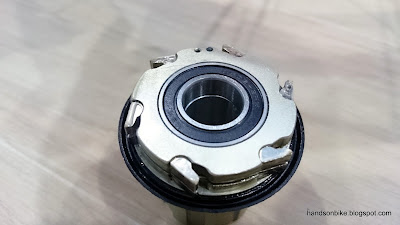 Freehub body of the Wheelsport Smart 1.0 wheelset. 6 pawls with 1 large spring for all 6 pawls.

Are 3 pawls or 6 pawls better for a freehub design? It depends on what you want in your freehub.

Advantages of 6 pawls over 3 pawls:
1) In theory, twice as much engagement between ratchet and pawls
2) Less stress on each pawl, since the force is divided across 6 instead of 3 pawls

To the layman, 6 pawls may seem better as it will be stronger with more points of engagement. However during actual riding, it is unlikely that all 6 pawls will be fully engaged simultaneously due to manufacturing tolerances. In fact, if the ratchet and pawls are sufficiently strong, 1 or 2 pawls are already sufficient. 6 is actually overkill and can create more drag during freewheeling.

In this case, I actually prefer the 3 pawl design of the Wheelsport Sunny rear hub with 3 individual pawl springs. If one of the pawl springs break, there are still 2 more working pawls to support the load. Compared to the Wheelsport Smart 1.0 rear hub with 6 pawls and 1 spring, if the spring breaks, all 6 pawls will not function and the hub will not work. In terms of reliability, the 3 pawl design with 3 individual springs is actually more fail safe. In any case, pawl spring failure is rare and should not be something that you need to worry about.

These are the internal differences that will not matter to most riders, as they are not able to feel it during cycling anyway. The other difference is the freehub design. 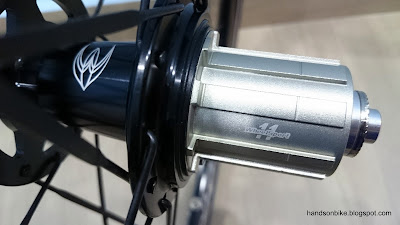 Freehub body on the Wheelsport Smart 1.0 wheelset, with the 11 speed compatibility clearly labeled.

A higher profile rim is usually seen to be more aggressive and more aerodynamic, as seen by 50mm rim heights used by most road bikes. However, on small wheeled bikes, the speed is usually not fast enough to make a noticeable difference in aerodynamics. Also, a high profile rim can be more prone to side winds that will make the bike unstable, as experienced on the Dahon Boardwalk in Taiwan. 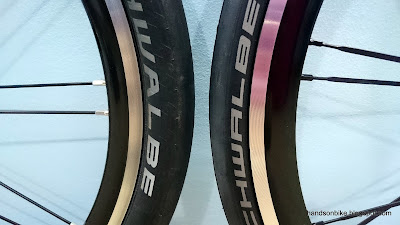 The tire height also affects the overall rim profile. As seen below, a 406 sized Wheelsport Sunny with large Kojak tires has almost the same tire circumference as a 451 Wheelsport Smart 1.0 with low profile Schwalbe One tires.

A higher rim profile is usually also heavier in weight, as more material is used to produce the taller rim profile. In this case, if the same hub is used, the Wheelsport Sunny may actually be lighter than the more expensive Wheelsport Smart 1.0, given the different rim height. I am not able to give accurate numbers for the weight of the Wheelsport wheelsets, as they differ quite a bit from year to year. This variation is caused by the different rear hub used, different rim profile and different wheel size (406 or 451). The only accurate way to get the weight of the wheelset is to weigh the actual set that you are buying. 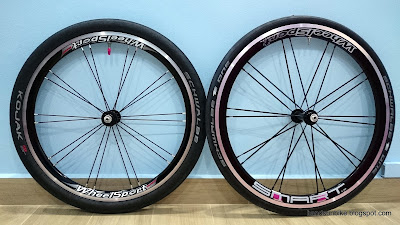 Similar overall tire circumference, despite the different rim size (406 vs 451) and different tires

On the other hand, if you are going for the latest 11 speed drivetrain, or want a wheelset that looks more sporty with a slightly higher rim profile and bladed spokes, the Wheelsport Smart 1.0 does the job. Both are good wheelsets that are mainly differentiated by the features listed above.
at February 21, 2016 11 comments:

During the recent conversion of the Wheelsport Fantasy mini velo from flat handlebar to drop bar setup, I had the chance to compare the rear derailleurs and front derailleurs before and after the upgrade.

When it was a 2x10 speed flat handlebar setup, the rear and front derailleur were from the Shimano 105 5700 series. After upgrading, the rear and front derailleurs have been upgraded to the latest 105 5800 series. One thing to note is that the 105 5800 series components are designed for 11 speed, but I am using it for a 10 speed set up on this mini velo. Not recommended, but it still works. 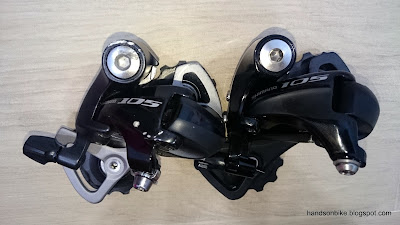 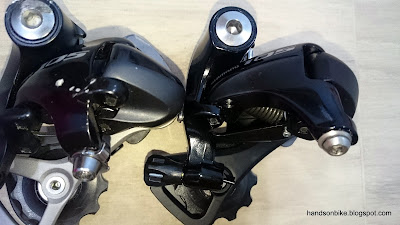 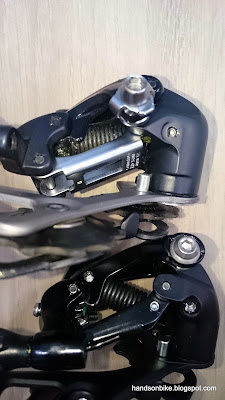 Bottom view. Notice the different guide spring hooking points between the 5700 RD at the top and the 5800 RD at the bottom. This gives a more consistent spring force across the gears. The inner link of the new RD is also black instead of silver colour for the older RD. 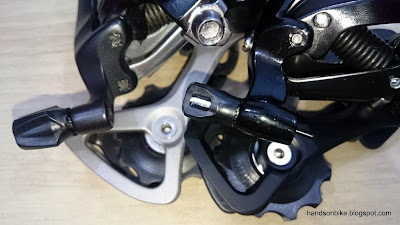 The cable adjust bolt area is also quite different. There is an extra sleeve on the new 5800 RD to minimise the rubbing on the polymer coating of the new low friction polymer-coated inner cables. All black cage set for the new 5800 RD, unlike the 5700 RD which still has some silver coloured parts. 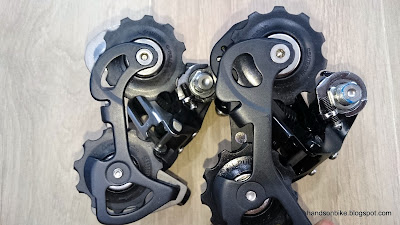 From the back view, both of them look quite similar 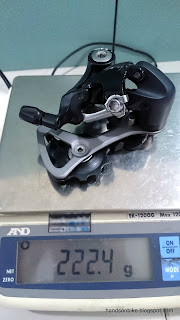 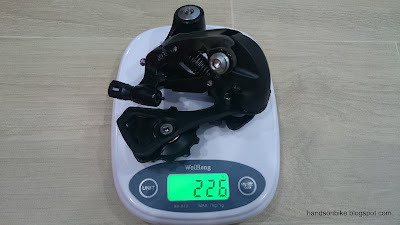 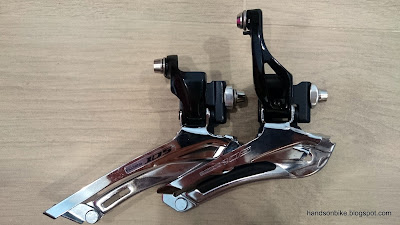 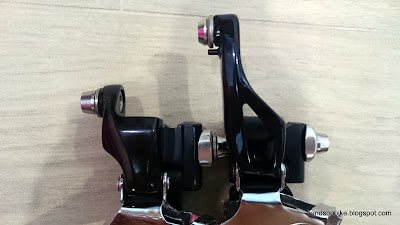 The size of the outer link is very different. The new 5800 FD has a long arm construction which gives more leverage for a light shifting feeling. It is also hollow in the middle, both for reducing weight and also for adjusting the support bolt.

One of the downsides of having a long arm construction is the frame compatibility with some small wheeled bikes. For example, the long arm will interfere with the frame when installed on a Dahon Mu frame or Tern Verge frame, as the tall seat stays are very close to the FD mounts. This rules out the use of long arm FD on these frames.

I suspect this is one of the reason why there is only the Tern Verge X18 (2x9 speed, with old short arm design), instead of a high end 2x11 speed Tern Verge, as the new long arm FD is not compatible with the frame. 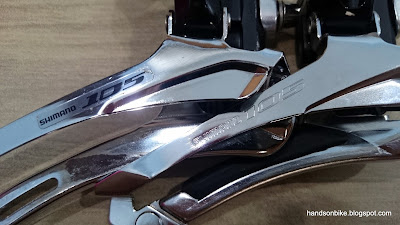 5700 FD has a sticker for the logo, while the new 5800 logo is embossed onto the chain guide. Not as nice in my opinion as it is not very visible and looks cheap. Also note the additional plastic skid plate on the chain guide which minimises chain rubbing noise when the trimming function on the shifter is not used correctly. 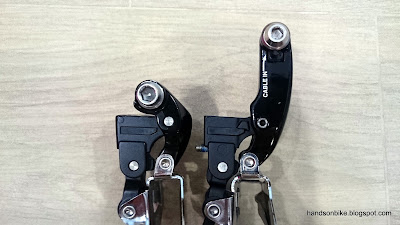 The difference in arm length is very evident here. Note the extra pin near the cable fixing bolt on the 5800 FD, which is used to adjust the path of the inner cable to suit different frames. 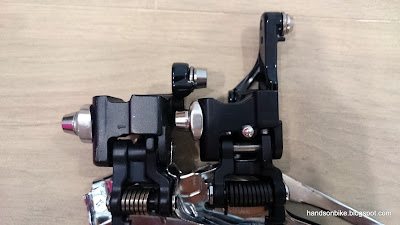 The guide spring on the 5800 FD has more coils, which will give a flatter spring force across the working range. There is also the support bolt sticking out from the middle of the 5800 FD. When adjusted from the other side, this bolt will contact the frame and make the whole FD more rigid for better shifting. 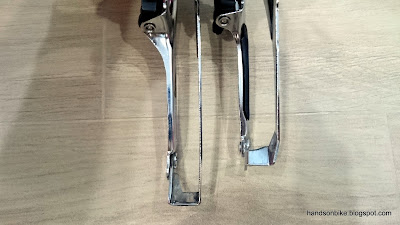 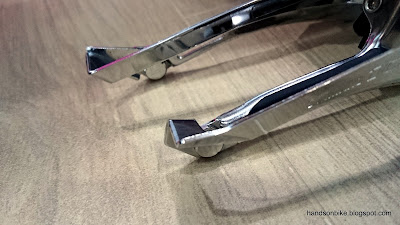 This different length is partly due to the different bending design used, as shown here. It caused some chain rubbing issues on the Wheelsport frames when the FD mount is not designed correctly. For more details check out these two links below. 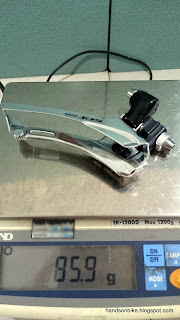 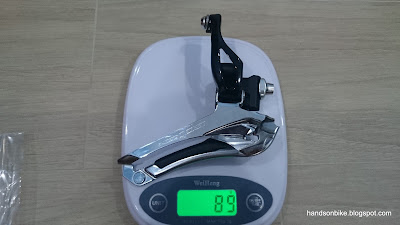