During the latest upgrade of the Wheelsport Fantasy mini velo, I had the chance to take a closer look at the Dura-Ace road shifter ST-9000. This was also a good chance to compare it with the Ultegra ST-6800 road shifter.

As I have already done many times, I like to do a feature-by-feature comparison of various components of different grades. This makes it easy for us to make an informed comparison to decide which grade of component to use.

Today, I will compare the Dura-Ace ST-9000 road shifter with the Ultegra ST-6800 road shifter. They are both 2x11 speed road shifters that are cross compatible. So, how are they similar and different?

As a Dura-Ace shifter, the utmost importance is to ensure the smoothest and lightest shifting performance possible, while also keeping weight down to the minimum. The next grade down, Ultegra would aim to replicate most of the performance of the Dura-Ace shifters, while ensuring that the weight is kept low and at a more affordable price. 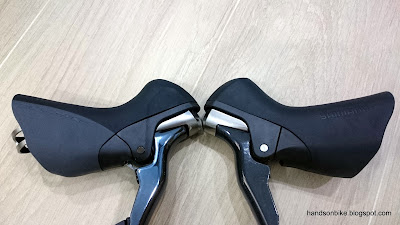 Dura-Ace ST-9000 on the left, Ultegra ST-6800 on the right. Note the black axle on the Dura-Ace brake lever for the slightly more integrated look. 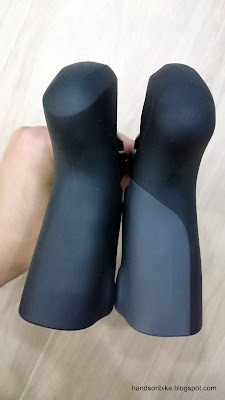 The rubber hood on the Dura-Ace shifter has a two-tone colour that supposedly has a softer compound at the grey area, but I cannot really feel a difference. The grip size and feeling is the same across the two shifters. 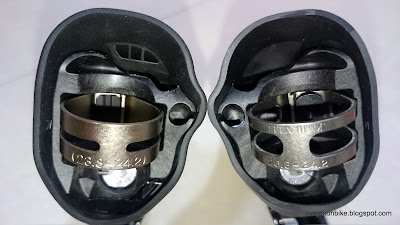 To save weight, the Dura-Ace shifter on the right side has a titanium clamp band, as opposed to the plated steel clamp band used on the Ultegra and below grades of road shifters. 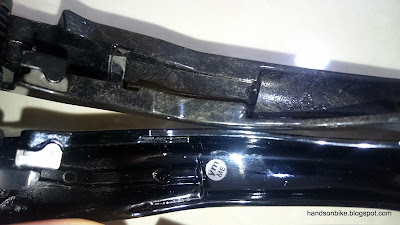 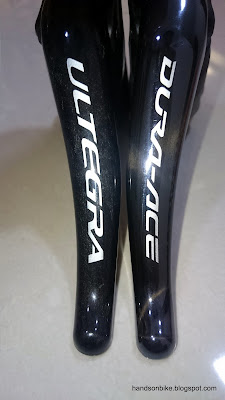 The clear coat finishing on the brake levers look very different up close. The Dura-Ace finishing is super smooth and glossy, while the Ultegra finishing is not as smooth. Not obvious from this picture, but visible when viewing the actual part. 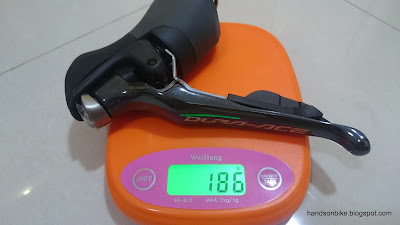 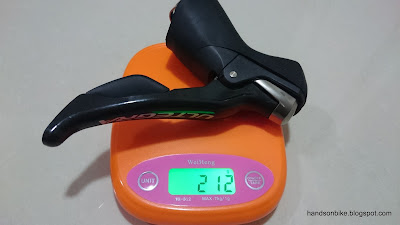 These are the 5 main physical and visual differences for the road shifters:
1) Hood colour and material
2) Titanium vs steel clamp band
3) Brake Lever reinforcement
4) Quality of clear coat finishing
5) Weight

As for performance, the Dura-Ace shifters have a very refined, smooth and light clicking feeling, as it uses sealed bearings for some of the shifting mechanism inside. The Ultegra shifters work very well too, although it just lacks that extra bit of smoothness as compared to Dura-Ace. That is totally excusable, given that the Ultegra shifters cost half of the Dura-Ace shifters, and yet works 90% as well.

As you may already know, the Avanti Inc 3 is the ideal all weather commuting bike, according to my requirements for a commuting bike. Besides being able to handle all weather riding with little or no maintenance, it needs to work and ride well with good durability. 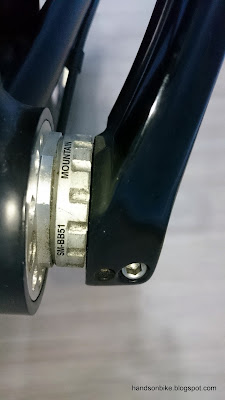 During the past few rides, I have noticed a difference in the pedaling feel on this Avanti Inc 3 bike. It felt a bit rough and unstable. Since I ride and customize all my bikes personally, I am quite sensitive to changes to the feel of the bike. For example, if the seat post height has been changed slightly, or if the tire pressure is lower than usual, I will be able to feel and detect these differences.

This means that the bearings or ball races in the bottom bracket are probably worn out, causing the large amount of play and also rough rotation feeling. The bottom bracket is considered a consumable part (similar to the chain, cassette, brake pads), which means that it is prone to wear and needs to be replaced after running for a certain amount of mileage.

In order to change out the bottom bracket, the crankset needs to be removed. Due to the belt drive system, this bike uses an eccentric BB insert for adjusting the belt tension. As such, it will not be possible to remove the crankset without first removing the belt from the front pulley. 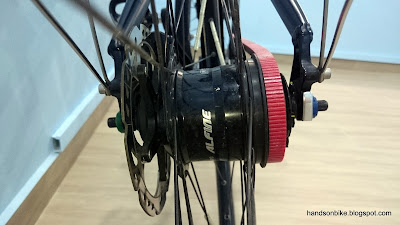 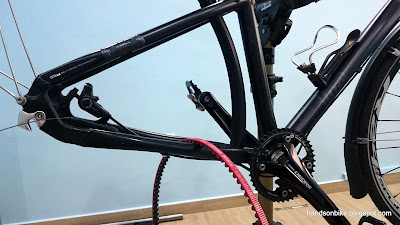 With the rear wheel removed, there is no more tension on the belt and the belt can be removed from the front pulley easily. 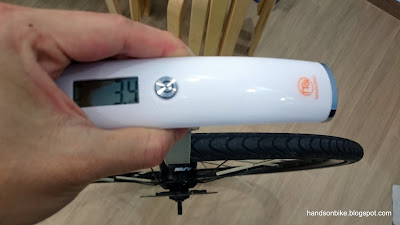 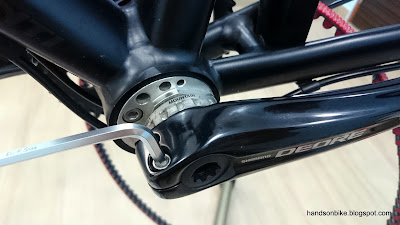 As mentioned earlier, the left crankarm is first removed to expose the crankset spindle. 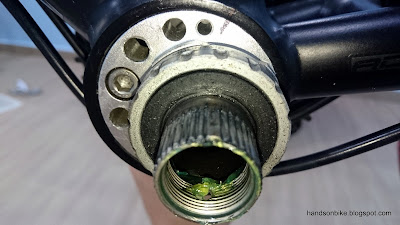 Gritty bottom bracket, as it has never been serviced despite riding the bike in rain often. Also shown here is the eccentric BB insert that is used to adjust the belt tension. 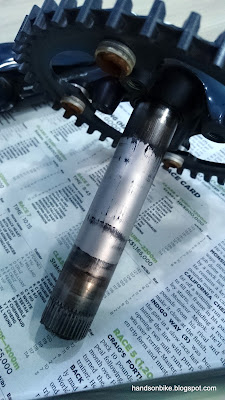 The crankset removed. Black grease shows that it has been in use for quite some time. Also shown is the rusty chainring bolts, which I would rather not touch as it is likely to give me more problems. 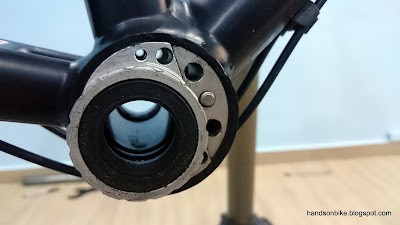 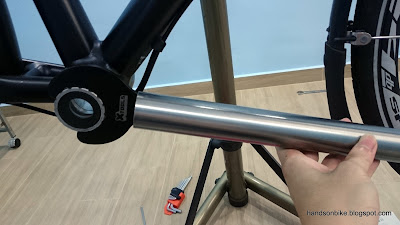 The bottom bracket was very tightly fixed to the frame, and it was too tight to remove with a normal Hollowtech II tool. The solution is to slip on a Dahon seatpost, which is large enough to go over the handle of the original tool. This gives plenty of leverage which makes it easy to unscrew the bottom bracket.

Once the old bottom bracket is removed, I took the chance to clean up the whole bike, since the rear wheel is also already out of the frame. After that, it is time to put in a new bottom bracket and reinstall all the components! 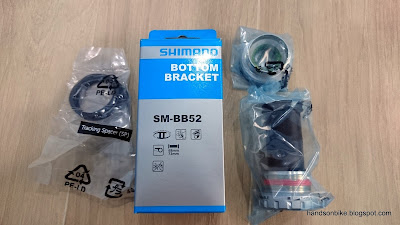 Deore grade SM-BB52 Bottom Bracket, an updated version of the older SM-BB51. From what I heard, they improved the sealing to be equal to the higher grade SM-BB70. 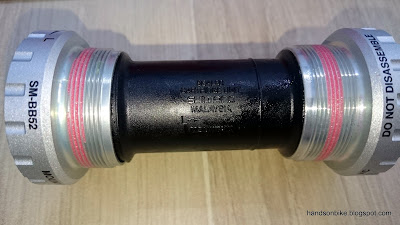 Close up view of SM-BB52 bottom bracket. If the sealing has been improved, it will last longer than the SM-BB51 that was previously on the bike. 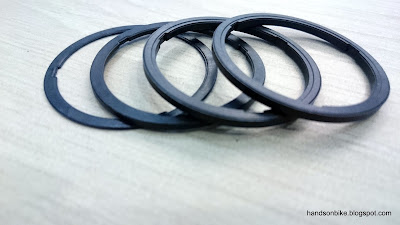 It came with a few spacers of assorted thicknesses, which is great if you need to fine tune your chain line. Will be useful on Dahon bikes too from my previous experience with modifying Dahon bikes. 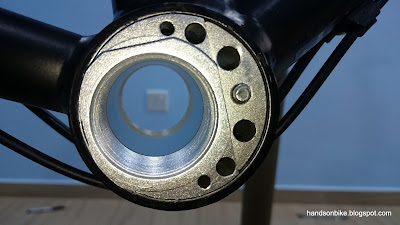 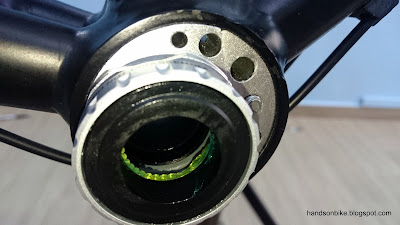 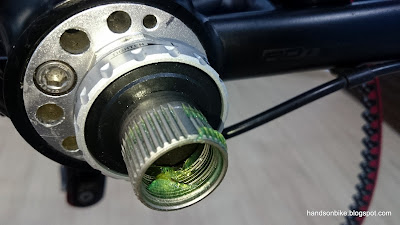 Sufficient grease on the metal-to-metal contact surfaces to prevent binding and improve sealing against water. 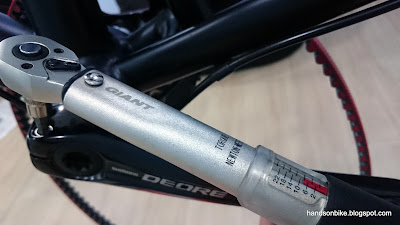 It is recommended to use a torque wrench to achieve proper tightening torque at critical areas, such as crank arm bolts. 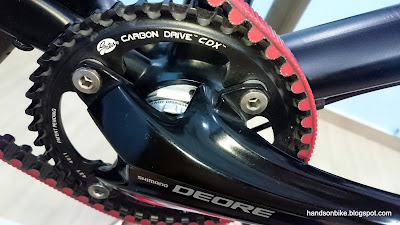 After the new bottom bracket has been installed, all the other components can be fixed back onto the bike.

With the new bottom bracket, the pedaling feel is smooth again! There is no more play in the crankset, and the bike is now running well again after this servicing.
at September 04, 2016 No comments: