For those who are still running multiple chainrings on your mountain bikes, it is time to consider switching to a front single chainring! With the rapid rise in popularity and performance of 11 and 12 speed wide range cassettes, there are very few reasons to run a double or even a triple front chainring on a mountain bike any more.

This crankset looks good, works well, and is quite affordable too! I see no point in getting the higher end Deore XT version just to save a little bit of weight. If I am not wrong, I think the SLX M7000 single crankset is one of the most popular specifications, as it is often out of stock online, while those that are actually in stock have relatively high prices due to high demand.

Let's take a closer look at this crankset and see how it manages to achieve this balance of cost, function and appearance!

SLX FC-M7000 front single crankset. Sold without a chainring, so that you can choose your preferred chainring size or even use third party chainrings.

It can also be used to mount a double chainring, as seen from the second set of mounting points with a smaller BCD.

Designed for 11 speed chainrings, but actually you can just install other chainrings on it as long as it fits the BCD.

Nothing too fanciful here, just some nice character lines and high quality surface finishing for a simple yet premium look.

34T chainring, bought separately. The bolts are included with the crankset, not the chainrings.

Narrow wide teeth to improve chain retention over rough terrain. 34T is used on my MTB to compensate for the smaller 26" wheels.

Right side crankarm without chainring weighs about 364 grams.

Left side crankarm weighs about 223 grams.

In total, the complete SLX M7000 crankset with 34T chainring weighs 704 grams. Not the lightest, but a very reasonable weight for the price. 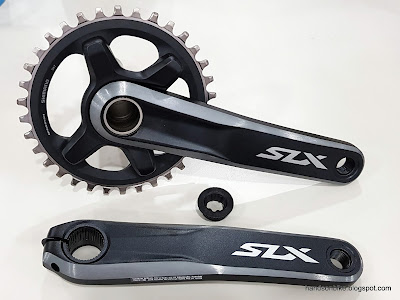 Another view of the SLX M7000 crankset.

I think this is a very good example of a component that just works without fuss. Ever since I installed it some time ago, I had zero problems from this crankset, and I don't need to worry about compatibility even though I am trying out different groupsets with different chains.

From other people's experience, these chainrings are not compatible with the new XTR M9100 12 speed drivetrain, and so a new chainring and possibly a new crankset is needed. Otherwise, it is probably compatible with 99% of all other front single drivetrains out there!
at May 19, 2019 No comments: