New Bashguard for my Boardwalk!

Just got some new stuff to "zhng" my bike today! Remember the last time when I added a bashguard to my bike? It is to prevent chain drop, which tends to happen when I upshift when pedaling down a slope. I am happy to report that after installing the bashguard, there has been no chain drop issues at all! I can pedal and change gears whenever I like without fearing that the chain will drop off the chainring.

However, the bashguard which I installed the last time was gold in colour. Even though gold is part of my bike's colour scheme, the big disc of gold stands out too much and does not fit the overall look of the bike. The new black bashguard looks so much better! Also, I get to use my gold chainring bolts hahaha... 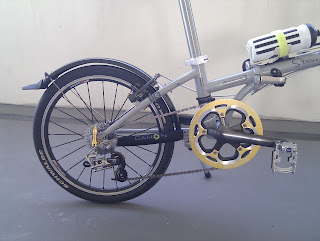 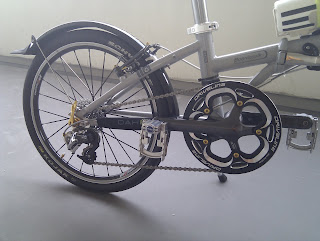 e-Walker had its official opening last Sunday, and it was quite a blast! Many people turned up to try new bikes, and we had the chance to bring the bikes out for an extended spin! These demo bikes included those in the Pacific Cycles range, such as the Birdy, Frog, iF Mode, CarryMe, Reach etc. There are also many configurations of each model of bikes, with different component set ups.

I chose the Birdy Disc Brake, because I wanted to check out how disc brakes would feel on small wheeled bikes, and also because I wanted to see how good the suspension system is. It is really a good looking bike, no doubt helped by the fact that it comes in a drool-inducing polished silver! 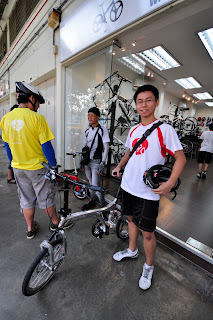 Initially I thought that it would not be easy for me to get used to the bike, because the geometry and riding feel would be different from my own Boardwalk. However, I found that the steering and stability feels very much the same as what I am used to. Although it is an 18" wheel bikes, at no point in time did I feel that the wheel size is smaller than my own 20" Dahon Boardwalk, and the smaller wheels is certainly no disadvantage. 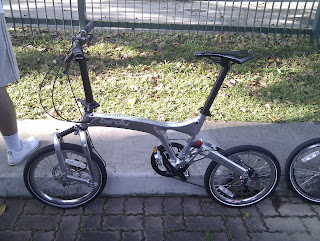 Gorgeous looking Birdy!
Note that the saddle seems to have been attached to the seatpost the wrong way round.

Before I left e-Walker with the bike, I asked Fu De of e-Walker if the bike can hop down curbs with no problem. He replied confidently that the suspension of the Birdy will take care of it. To test out the suspension, I kept going onto the pavement to make the suspension work, going across tree roots, broken pavement and other obstacles on the pavement. As a final test, I went off the curb onto the road. When it landed, I could feel that the suspension seemed to compress a lot, but I did not get a feeling that it has bottomed out. This is probably due to the Polyurethane elastomer suspension in the rear, which did its job brilliantly. 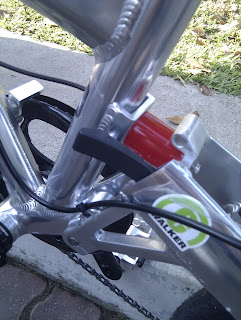 
It is quite amazing how the front and rear suspension dampens out most of the road vibration. Even on broken roads or uneven ground, the suspension works perfectly, ensuring that the rider does not feel much bumpiness. It is something that you have to try the bike in order to fully appreciate it. Another kind of ground on which this little suspension bike excels in is those kind of red-tiled pavement/road or speed limiting strips. The bike essentially glides over these bumps without trouble, allowing you to maintain your speed even through these bumpy areas. On the other hand, a bike without suspension would not be able to go so fast comfortably because there would be excessive vibration. 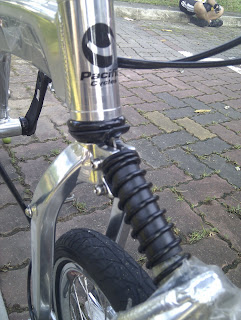 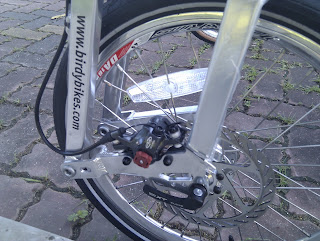 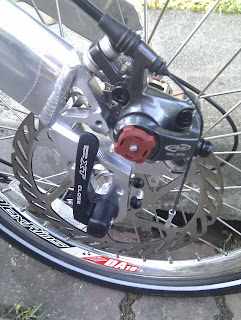 
The wheelset that comes with the bike is excellent, very smooth rolling. The default Marathon Racers are perfectly suited for this kind of bike. If a slick tire such as a Durano or Kojak is used, it would be risky to go slightly off-road, even though there is suspension, because the slick tire would have less grip, be more likely to get stuck in a groove and be more prone to punctures. 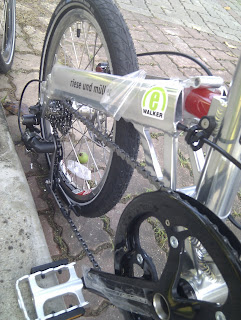 The Shimano 105 derailleur works fine, but the Shimano R440 9 speed flatbar shifter did not work perfectly. Maybe because I'm too used to top end shifters haha. Less discerning cyclists would not find a problem with it. The FSA Gossamer crankset works well, no flex in the bottom bracket at all.

The folding was a bit awkward, probably because I was folding it for the first time. The folding package is still rather large, and it looks like the bike is broken haha. It can be hard to balance it on the ground too. But I find it ingenious that the folding joints are also used as the suspension, eliminating extra pivots, joints and ultimately weight.

Overall, I find the Birdy to be an excellent full-suspension small-wheeled bike, and it is most effective when travelling on less-than-perfect roads, such as along Pioneer road towards Tuas, and along tiled pavement or roads. 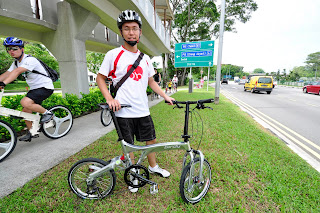