Just got back from Desaru! It was a great trip, with lots of fun and good food along the way. The slopes were challenging to some of us, but everyone managed to conquer the slopes eventually!

It was also the first time I have really tested the new handlepost which I got for my Boardwalk. Previously, I had only tried it on shorter rides such as the one at Punggol. I am pleased to say that this handlepost feels stiffer and stronger than the original adjustable one, especially when climbing hills and coasting down slopes.

You can see from the picture below that the black fixed length handlepost is about 3cm longer than the length which I usually set my adjustable handlepost. Overall, the fixed height handlepost is 42cm from the top of the clamp to the bottom of the part that fixes to the frame. Because it is 1-piece, this means that there will not a a problem with the top part of the handlepost rotating with respect to the lower portion. Also, because there is no joint in the middle, it also flexes much less when it is pulled. Crucially, this handlepost also folds inwards for compact folding. The outward folding kind would be shorter and even stiffer, but because it folds outwards, it makes the folded package significantly wider and harder to carry or store. 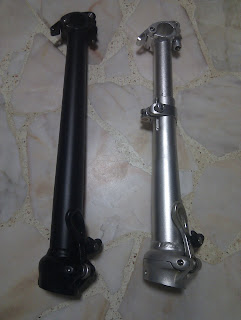 
To match the handlepost, of course I have to get a matching handlebar! Took the chance to upgrade the handlebar, and decided to get a lightweight ControlTech Scandium Handlebar. Point to take note is to find a handlebar with a diameter of 25.4mm, so as to be compatible with the handlepost clamp. Road bars are usually 26mm, while MTB bars are 31.8mm or 25.4mm. 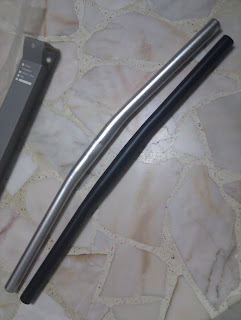 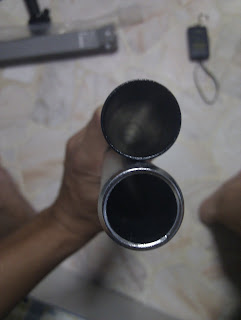 Look at the difference in tube thickness! The walls of the scandium handlebar may look very thin, but it is really strong and stiff. A carbon handlepost will weigh even less, at maybe 110g. But carbon can fail suddenly, and it can easily be damaged if the bike falls on its side. It can also be crushed by clamps or barends if they are overtightened. It would also cost double for a carbon handlebar. 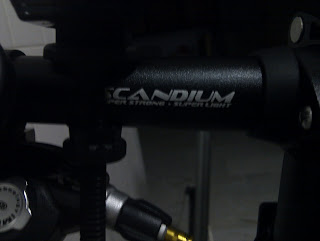 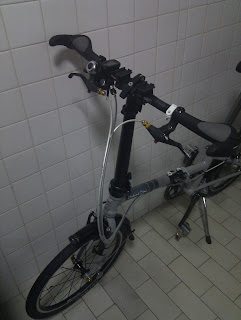 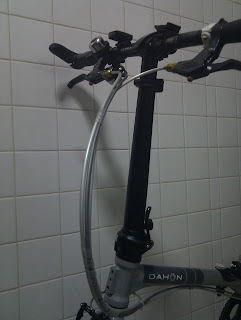 One thing not so good about this new handlepost/handlebar set up is that the things on the handlebar need to be rearranged. For example, the bell has to be shifted to the right hand side, or else it will get in the way when folding. The longer handlepost also puts the handlebar closer to the magnet, which barely clears the handlebar when folding. As seen in the pictures, you basically can't put much on the left side of the handlebar.

Initially wanted to write a review about the Biologic Air Horn, but decided not to after I found myself using it less and less. It is not required, but is just a good thing to have. On my rides I usually find myself using the horn at least once, such as when a car cuts across my path, or other situations where you want to make your presence known. But I find it quite troublesome to fix or remove the horn for folding, even though I made a removable clamp for the air bottle. 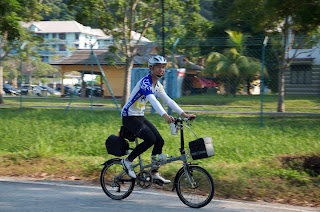