What you see in the title is not a typo error. Yes there is a bicycle brand called "Fnhon", and it is no surprise that they produce parts similar to Dahon bikes. From the name, it is obvious that it is a knockoff brand, but the quality seems to be pretty decent. In fact, it is getting popular in China, where there is a really hot market for folding bikes, with countless brands of folding bikes popping up.

I got to know of this brand through reading bicycle forums based in China/Taiwan, such as Mobile01 or 77Bike. From other people's reviews, this brand seems to be one of the better knockoff brands that are similar to Dahon.

Of course, there are many many brands that attempt to copy Dahon, making frames that look so alike that the only difference seems to be the colour and graphics. However, what makes Fnhon stands out from the rest is that they actually take Dahon's designs and improve on it, adding features and specifications that Dahon does not have. 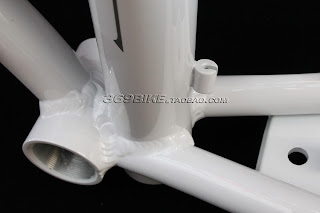 The outer casing stopper located on the rear of the Fnhon frame seat tube.
Simple but useful addition!

Another Fnhon component which I am impressed with is the handlepost. Although Dahon was the first to come up with the ubiquitous Dahon handlepost design, what I feel is lacking in Dahon designs is the choices available for the end user. For example, their T-shaped handleposts (such as on Speed Pro TT, Vector X27) are all outward folding only, and of only one height.

Fnhon saw a chance and came into the market, offering different handlepost specifications. Just to list a few, Fnhon has 1 piece, inward folding handleposts of at least 3 different lengths. Besides the different lengths and different colours (silver and black), there are also various mounting methods for the handlebar. You can choose between the T-shaped type (where you need an additional LitePro Stem), the popular quick release type (same page as the LitePro Stem), and a new bolted type. To see more, check out this Taobao page.

However, inward folding handleposts from Dahon are rather limited in choice. Besides the 2 piece handlepost on the Vitesse (which can be flexy and creaky, and may rotate if not tightened properly), and the Mu Uno handlepost on my Boardwalk (which is rather long), there are no other options from Dahon. 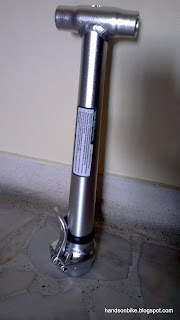 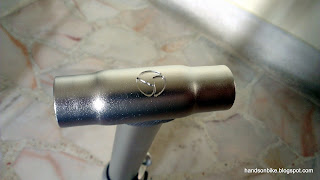 Closer look at the T-shaped top and the Fnhon logo

My first impression of the handlepost is that it is rather well built. From the feel of the surface treatment and the welded joints, it looks just as good as Dahon handleposts. The hinge is also solid with no signs of excessive play.

Next, I took out the stock 2 piece handlepost from the Vitesse and compared it with this new handlepost. 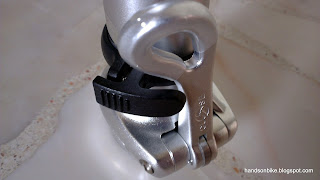 Fnhon handlepost with the old type of safety latch 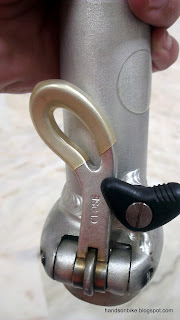 Dahon handlepost with the automatic safety latch, better but at a higher cost. 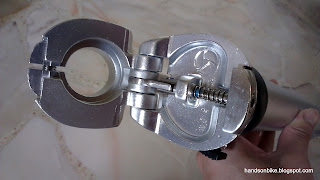 Fnhon handlepost with a simplified construction of the latch mechanism. Instead of using a bolt with opposite left and right hand threads for adjustment, it was simplified to a long bolt that can be adjusted from the outside. 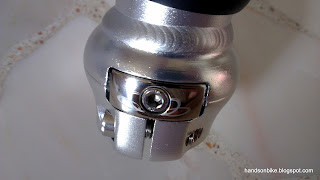 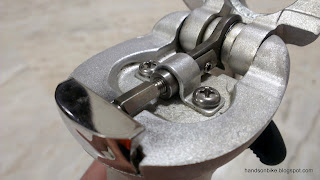 Dahon handlepost with the special oppositely threaded bolt, requires a wrench for adjustment. 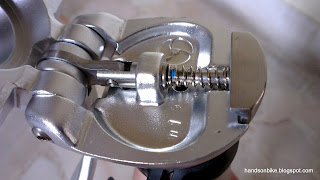 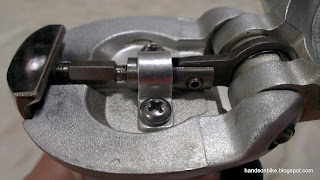 The original Dahon latch mechanism. Ingenious, but comes at a higher cost than the improved Fnhon mechanism. 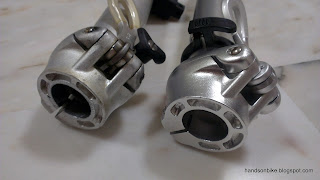 The base of the handlepost looks similar 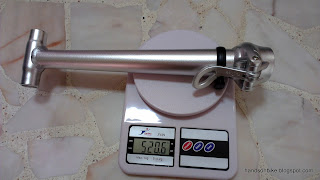 Of course, a weight comparison. 521 grams for this Fnhon handlepost. 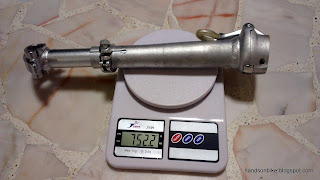 The most significant difference of all is the weight. The Fnhon handlepost is about 230 grams lighter, which is 30% lighter than the Dahon 2 piece handlepost. This dramatic reduction in weight is due to the absence of clamps on the top and in the middle of the handlepost, and the 1 piece construction. 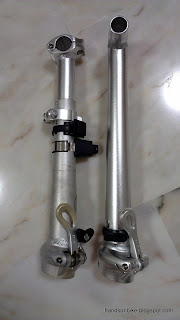 Placing the handleposts side by side. Almost similar in length when the 2 piece handlepost is at its shortest.

Of course, the Fnhon handlepost is not perfect. There are some blemishes which can be seen, such as this. 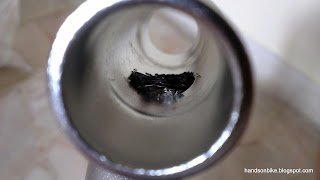 Big burrs on the inside of the handlepost, at the T-shaped area. Does not affect function though. 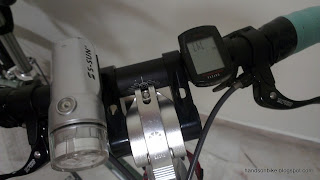 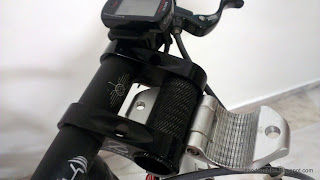 Remove the quick release clamp, and the handlebar can be removed easily!

Place the bullhorn bar to the side for now, and proceed to remove the handlepost from the bike. For more detailed instructions you can refer to the step by step guide here. 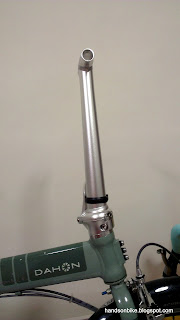 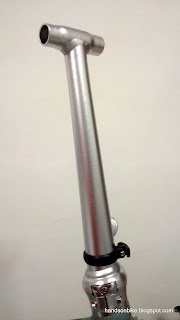 The surface of the handlepost looks really good. Can't tell if it is sandblasted and then anodised or painted. 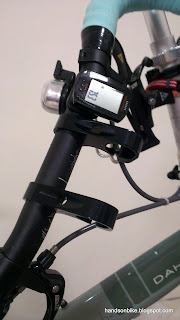 Loosen the LitePro stem further, and remove the connecting tube in the middle. It is no longer required. Space out the clamps so that it can go onto the T-shaped handlepost. 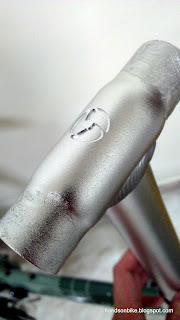 Dab some Fiber Grip onto the contact surface with the stem to prevent unwanted rotation. 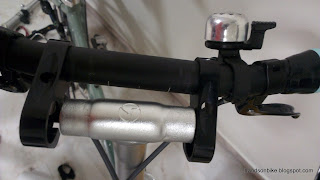 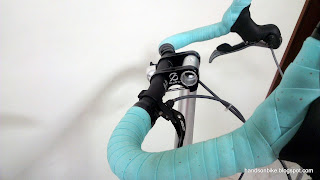 Adjusting the angle of the LitePro stem.

In this case, the stem is rotated behind the handlepost, as putting the stem at the front will make the reach too far, while putting it vertically up will set the bullhorn bar too high up. Since a bullhorn bar is used, the overall reach is still in front of the handlepost, which ensures the stability of the bike steering. It is not recommended to set the stem behind the handlepost when using a flat handlebar, as the resulting short reach will make the bike steering feel weird. 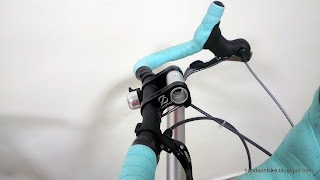 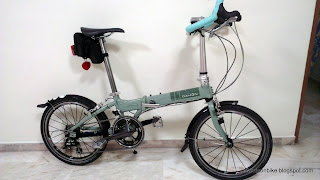 The Fnhon handlepost feels really stiff due to the 1 piece construction, and the removal of the height adjustment joint also means one less source of creaking. Bike fitting is maintained as the height is similar to what was used previously.

After these headset and handlepost upgrades, the Vitesse has also been thoroughly upgraded, with the only stock parts being the frame, fork, frame clamp and seat post clamp. It is almost at the level of the Dahon Boardwalk, where only the frame is stock!

I also have a handlepost upgrade for the Dahon Boardwalk...coming soon!