The quick release skewer is an often overlooked component on a bike. Despite looking small and flimsy, it plays an important role on the bike: Holding the wheels in place! Without a quick release skewer, the wheel would pop out whenever you go over a bump. Contrary to popular belief, the QR skewer does not bear weight on its axle. Rather, the load is borne by the ends of the hub, and the QR skewer merely clamps everything in place.

Of course, QR skewers did not always exist. Before it was invented by Mr. Campagnolo in the 1930's, cyclists have to loosen axle nuts before they could remove the wheel from the frame, which is comparatively more troublesome. Nowadays, QR skewers are found on most mid to high end bikes, with only the most basic entry level bikes still using traditional nutted axles for the wheels.

However, not all QR skewers are made the same! There are 2 main types of QR skewers: The internal cam type and the external cam type. From the pictures below, you can see the difference. 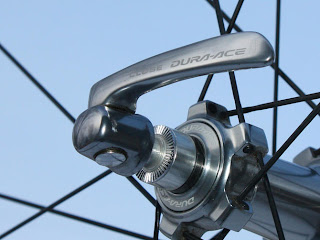 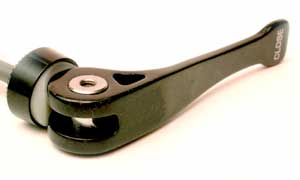 The most common type of QR skewers that we see nowadays are the external type. It is usually lighter in weight, and easier to manufacture. This makes it cheaper too. However, compared to the internal type with all metal parts, it does not have such a strong clamping force, and the performance is also poorer due to inferior parts being used (further elaborated below).

For normal usage, either type of QR skewer will work fine. However, if you want to know more about the difference between good and bad QR skewers, read on! 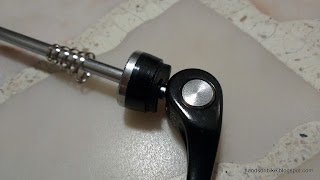 QR skewers that come with the Wheelsport wheelset 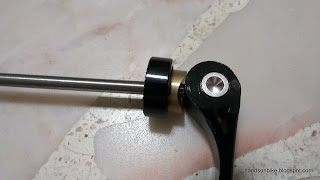 Did you spot the difference? If yes, good for you. You can tell the difference between a well designed QR skewer and a normal QR skewer. If not, read on to find out!

Look at the concave shaped washer under the lever cam. On most (90%) QR skewers, this piece is made of hard rubber or plastic (1st picture). When the lever is closed, the rubber compresses and some of the clamping force is lost. This is why you get a mushy feeling when you use this type of QR skewer. What you are feeling is the concave rubber washer compressing under load. Although it will still work, you will need to apply a higher force at the lever to close the QR skewer properly, as some of the force is used to compress the soft rubber washer instead of clamping the hub tightly.

On the other hand, look at the concave washer on the QR skewer in the 2nd picture. It is a solid metal washer made of brass. When closing the lever, the brass washer reduces the amount of friction in the cam mechanism (compared to the rubber washer), and it gives a nice, solid locking action. The brass washer does not compress and the clamping force is fully utilized to secure the wheel. Not only does the locking action feel smoother, the clamping force is easily achieved with less effort. 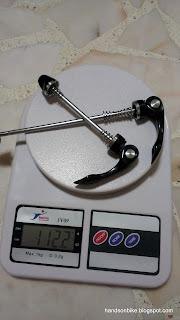 QR skewers from the Wheelsport wheelset. All the pivots and axle are made of normal steel, with aluminium levers. 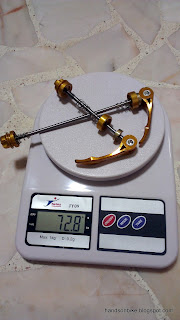 The titanium QR skewer is a good 40 grams lighter than the normal steel QR. This is despite it using a heavier brass washer. Another important feature is that because there is no steel used (besides the spring), it does not rust! Compare this to another QR skewer that has some rust on the exposed steel pivot. 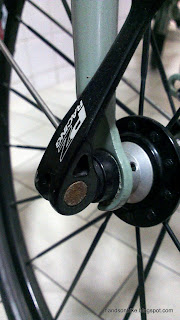 More pictures of the TAT Titanium QR Skewer below: 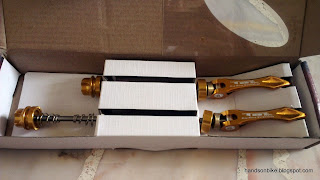 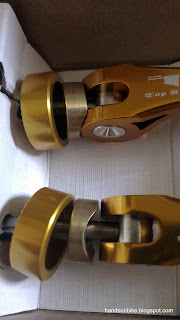 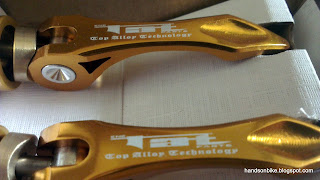 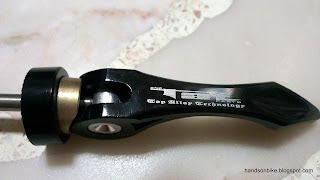 Bought both the black and the gold coloured QR skewers

Now you know the difference between good and normal QR skewers. Besides looking at the material used (titanium or steel) and the weight, also look at the type of concave washer that is used! A QR skewer with a brass washer will have a smoother operation and also more solid clamping action. Although this may not make a difference to most people, the quality shows up in the details.

This "brass washer" concept also applies for seatpost QR levers, but that is a story for another day... 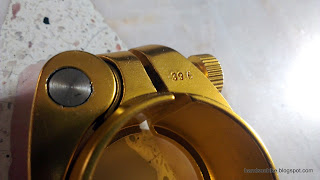 Seatpost QR lever with brass shim (instead of rubber/plastic washer)

For more info about QR skewers, you can refer to the links below.
Good vs Bad QR Skewers
Sheldon Brown - QR Skewers
at August 27, 2013