I have been looking for a suitable bicycle camera for some time. The most popular action cam is probably the GoPro, which is used by many professionals and also casual users to film action sports. However, I am not a fan of the squarish design which makes it awkward to mount on handlebars or on top of the helmet. Also, the price is rather high, and that price does not even include mounting accessories!

Someone recommended the Polaroid XS100 action camera as a good alternative to GoPro. The specs seem pretty impressive, and there are also some other advantages over GoPro. While researching on the XS100, I found that the Wifi version, XS100i has recently been launched! With Wifi capability, it becomes much easier to access the camera's contents and also control the camera with a smartphone.

With a camera mounted on the bike or the helmet, we would be able to share interesting ride videos with others. On a more serious note, it can also serve as video evidence in the event of an accident on the road. After reading lots of good reviews on Amazon, I decided to get the Polaroid XS100i to try it out, as it was the first time I am getting an action camera. The Wifi edition is actually not available in Singapore yet (as far as I know), therefore I decided to get it online from Amazon. 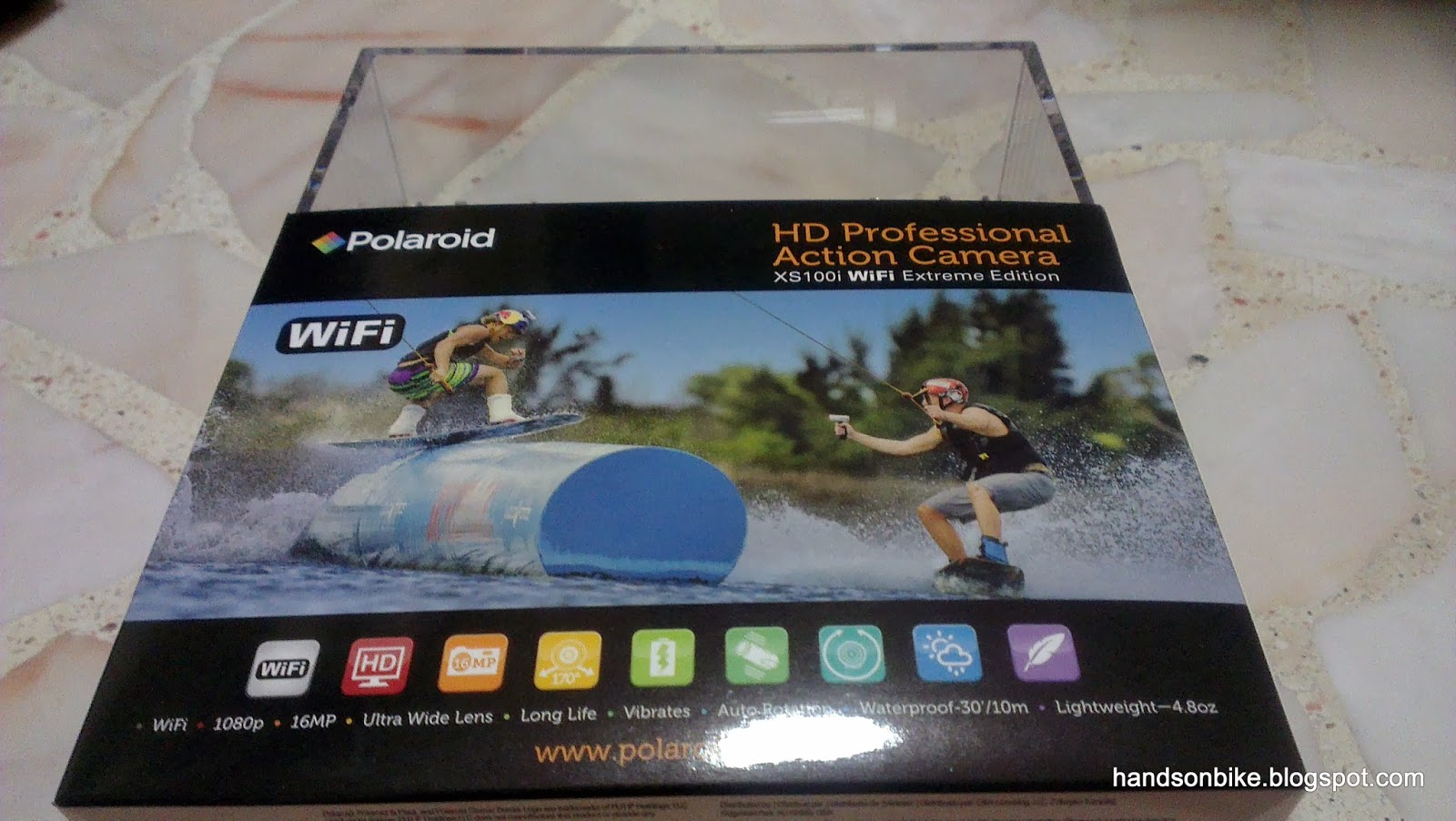 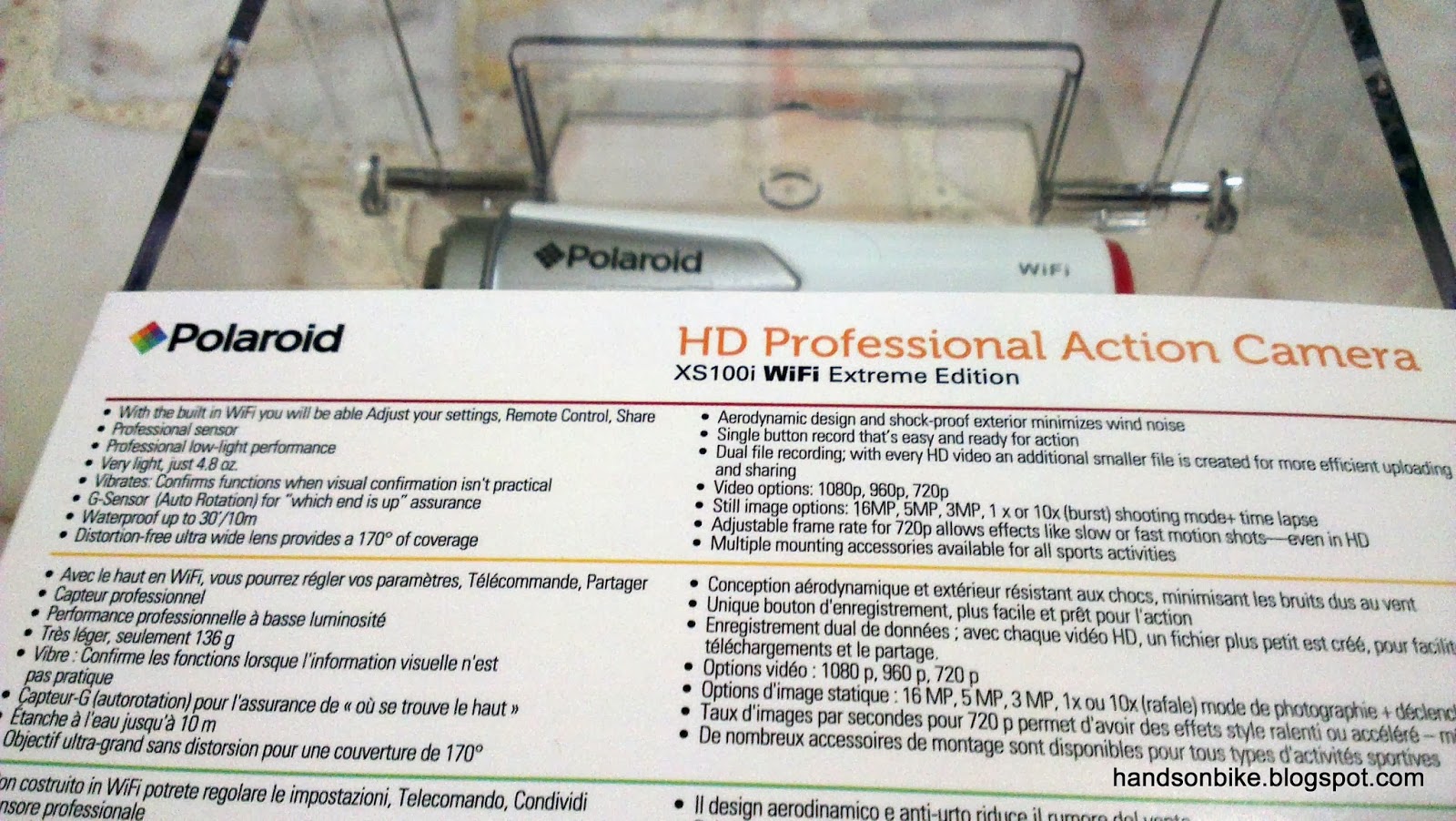 Some impressive specs that can rival or even surpass GoPro specs!

So what convinced me to choose the Polaroid XS100i over the GoPro Silver Edition?

1) Slim and cylindrical shape is easier to mount, much like mounting a front light on the bike.
2) Waterproof up to 10 metres without the need for a bulky and expensive waterproof case. This would make it rainproof which is really useful when using as a bicycle camera.

3) All mounting accessories are already included with the camera, there is no need to spend more money to buy the accessories.

Most other specs (170 degree FOV, Wifi, Full HD recording) are on par or just slightly inferior to GoPro Silver. What is most attractive is also the price. For USD $180 (S$230), you get the camera plus all the accessories. I have enough parts to be able to install the mount on the bike, and also a separate mount on the helmet, and move the camera between the different mounting easily, without buying any extra mounts or parts.

On the other hand, the GoPro Silver (S$389) gets you the camera plus a basic adhesive mount. This is all you need for mounting the GoPro on full face helmets, but it is not for me. Handlebar or helmet strap mounts are not included and need to be bought separately. Since I don't need the high end features of the GoPro (such as Full HD 60FPS recording), the Polaroid XS100i seems to be good enough for my needs. 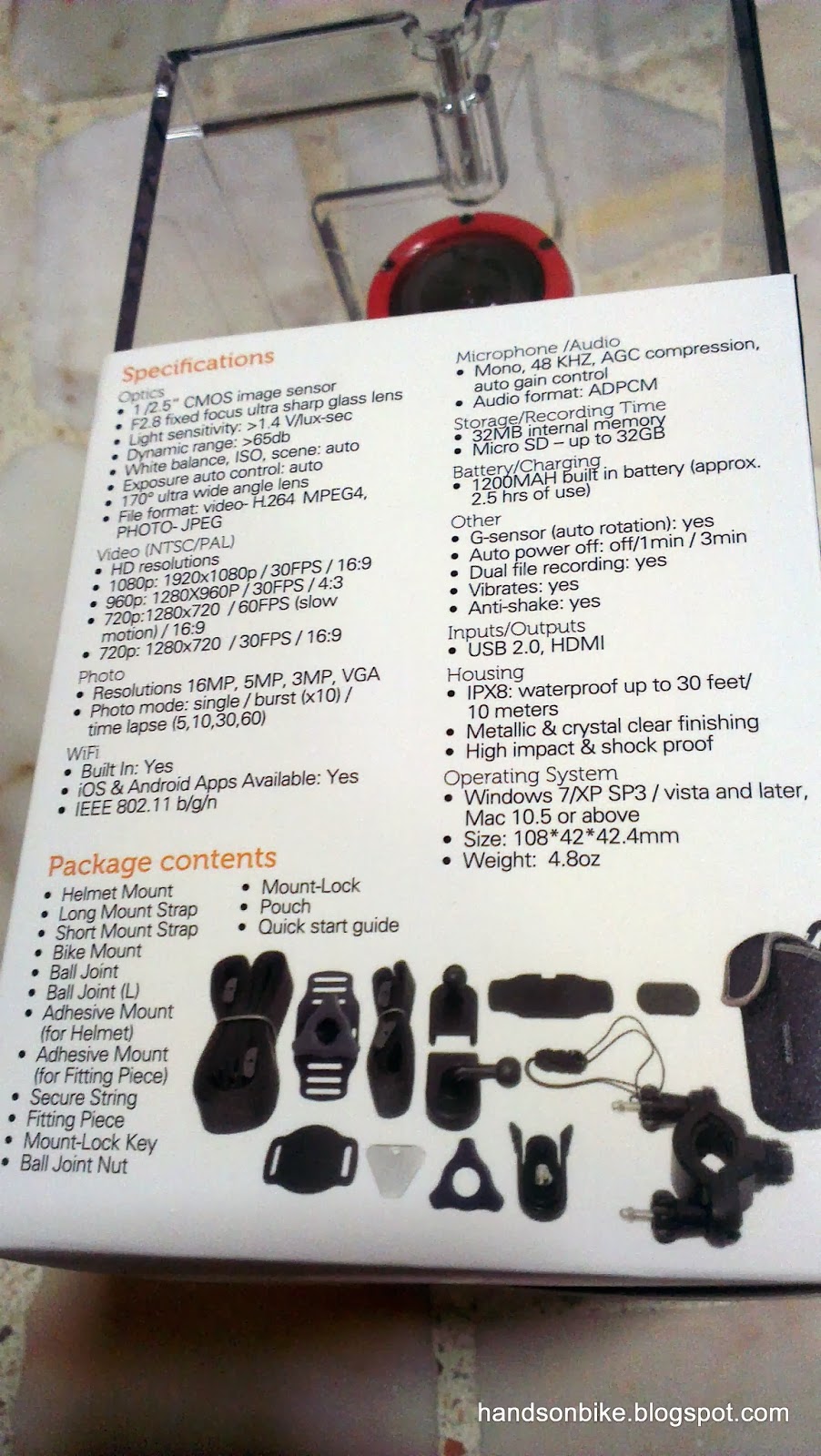 Yes it comes with all accessories! Only thing missing is the MicroSD card. 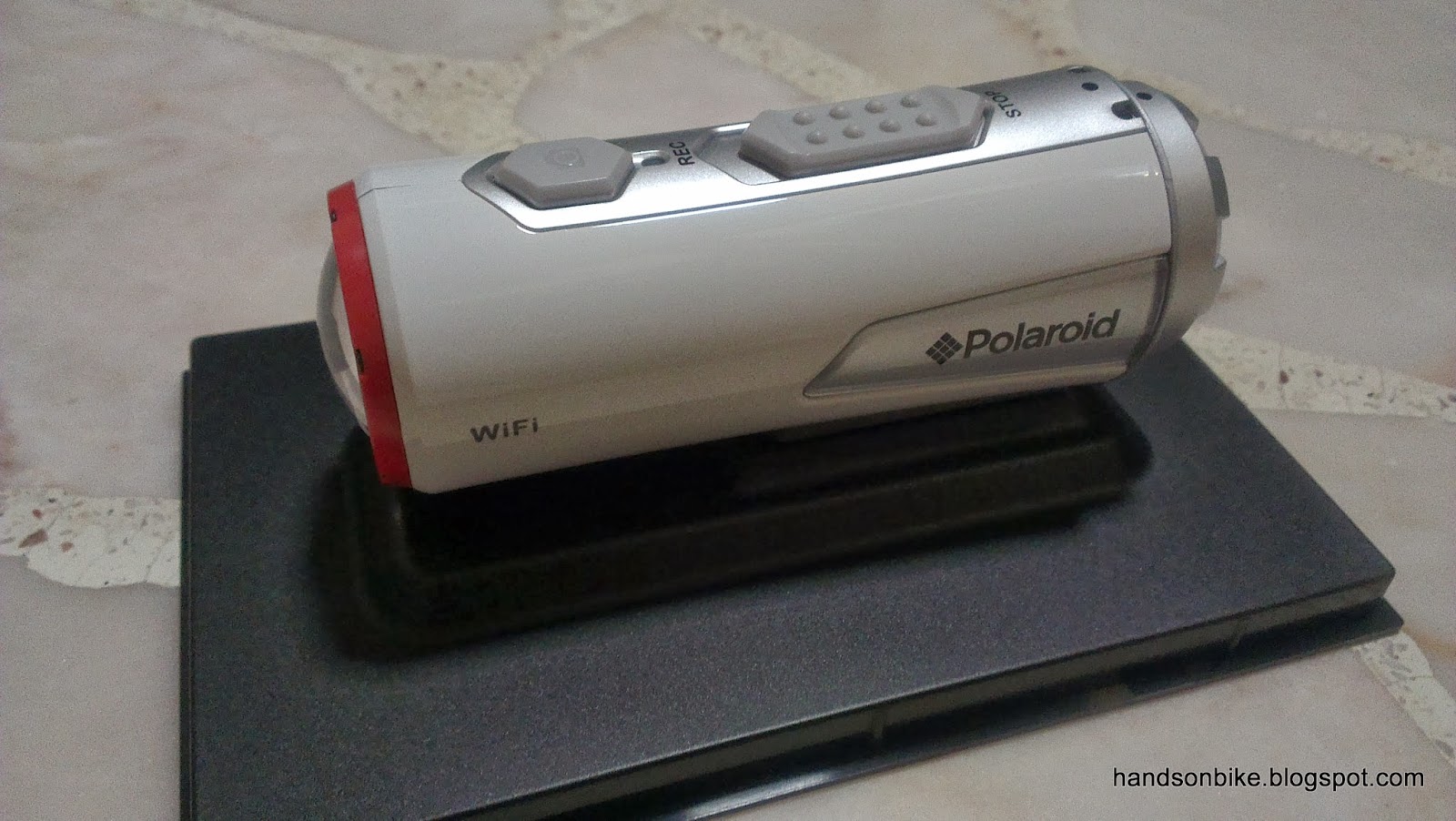 First view of the camera out of the box 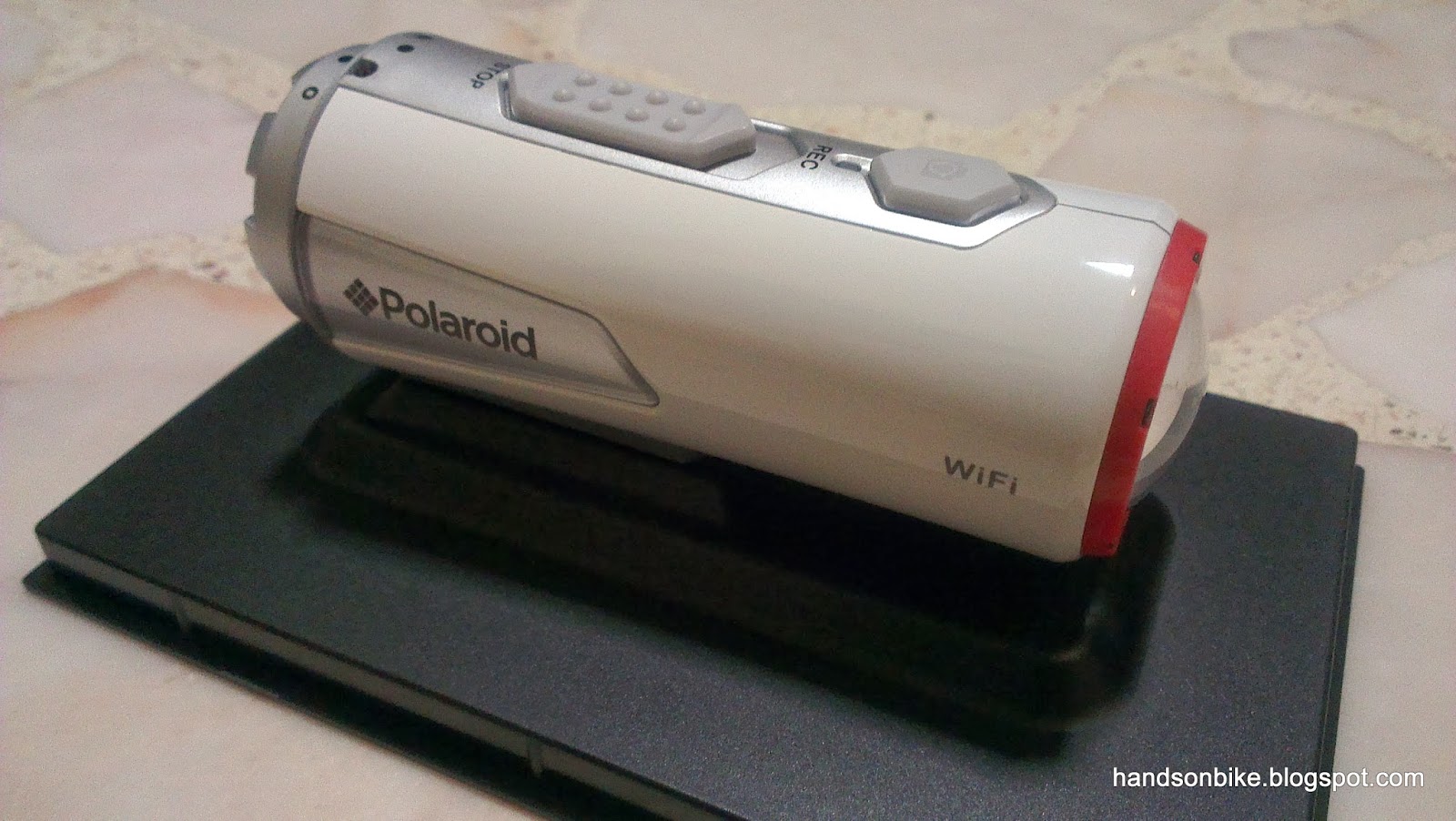 Wifi capability shown clearly on the side, to differentiate it from the older XS100. 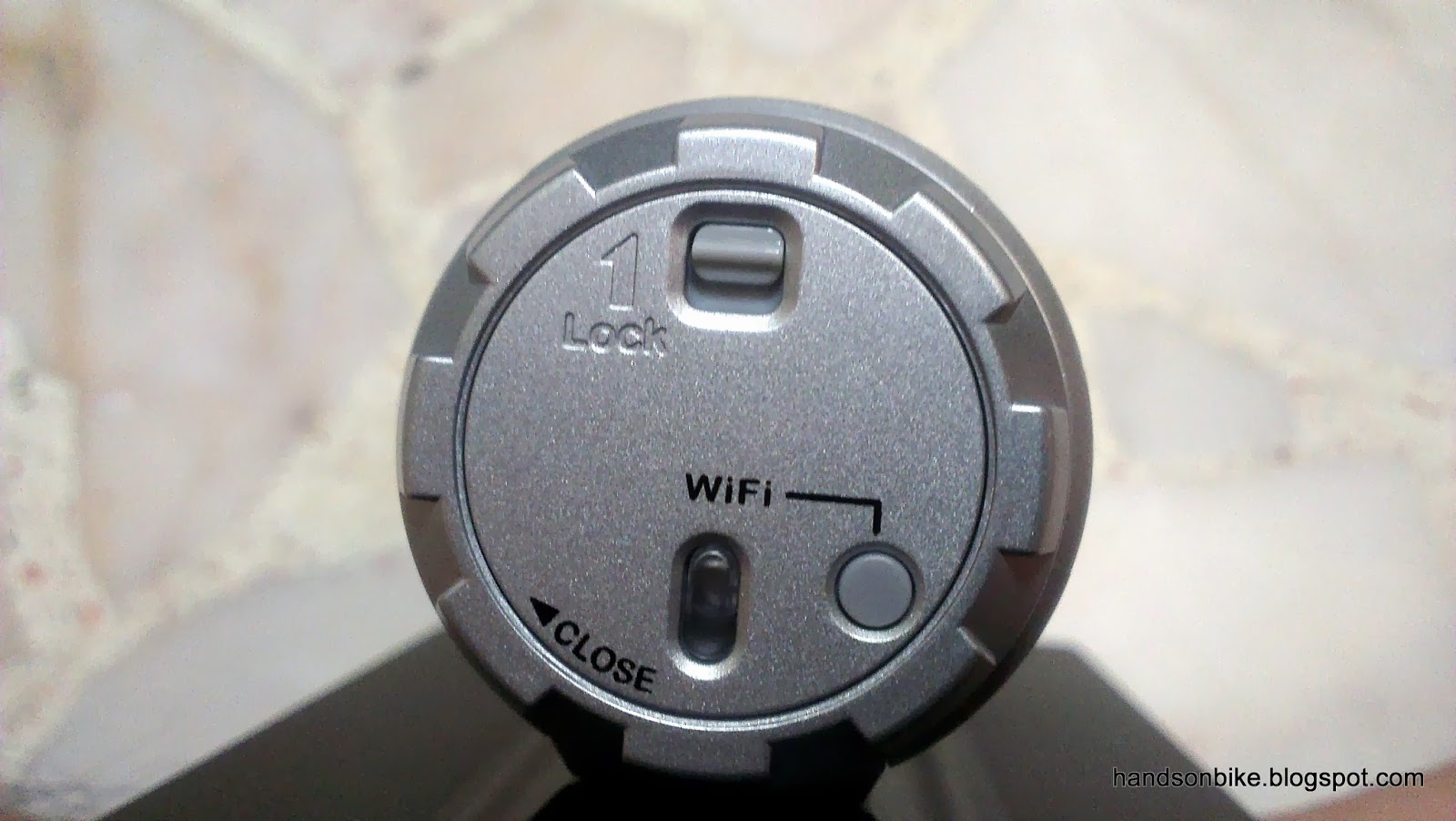 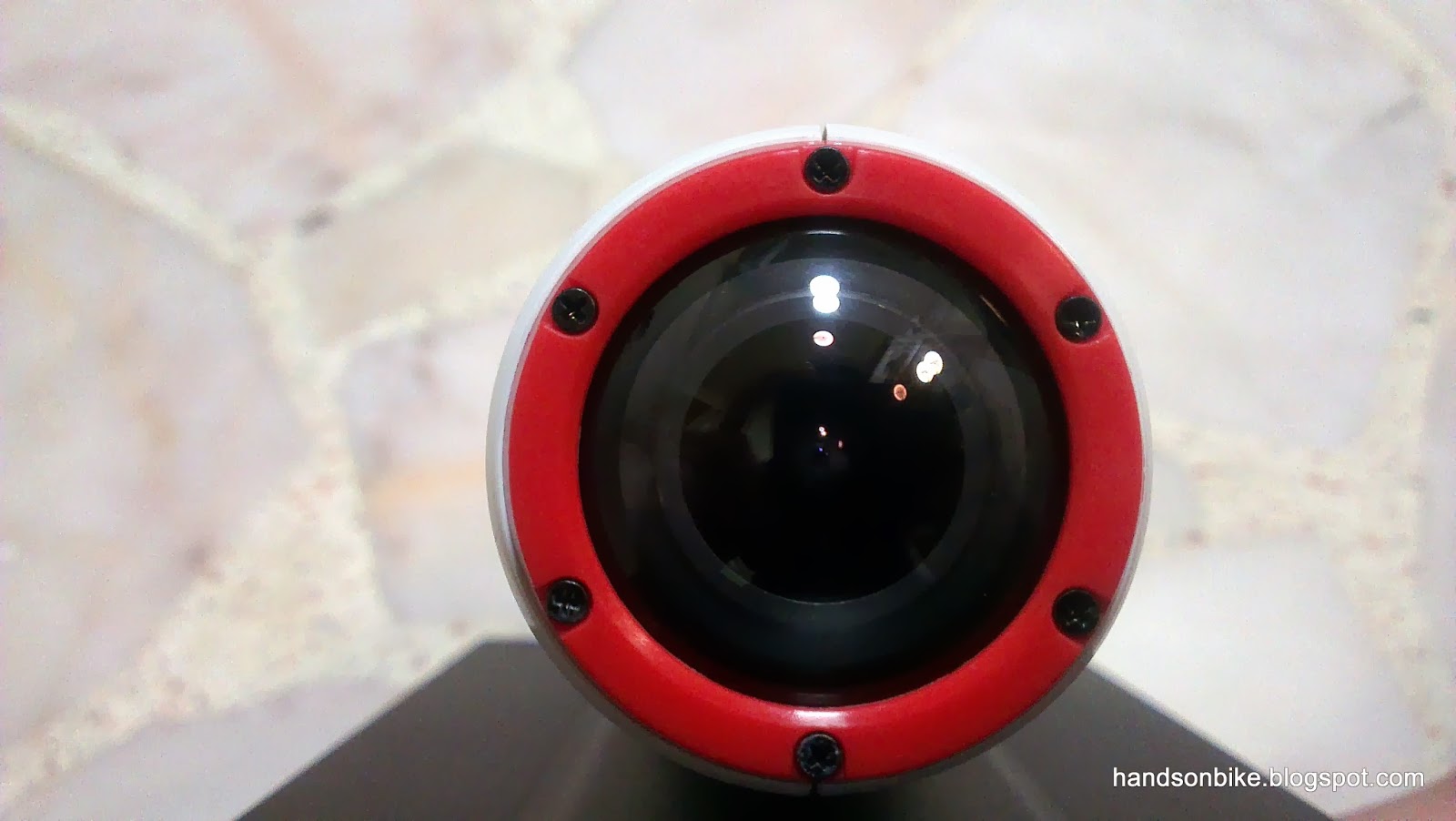 Spherical front cover protects the lens and also seals the camera against water. 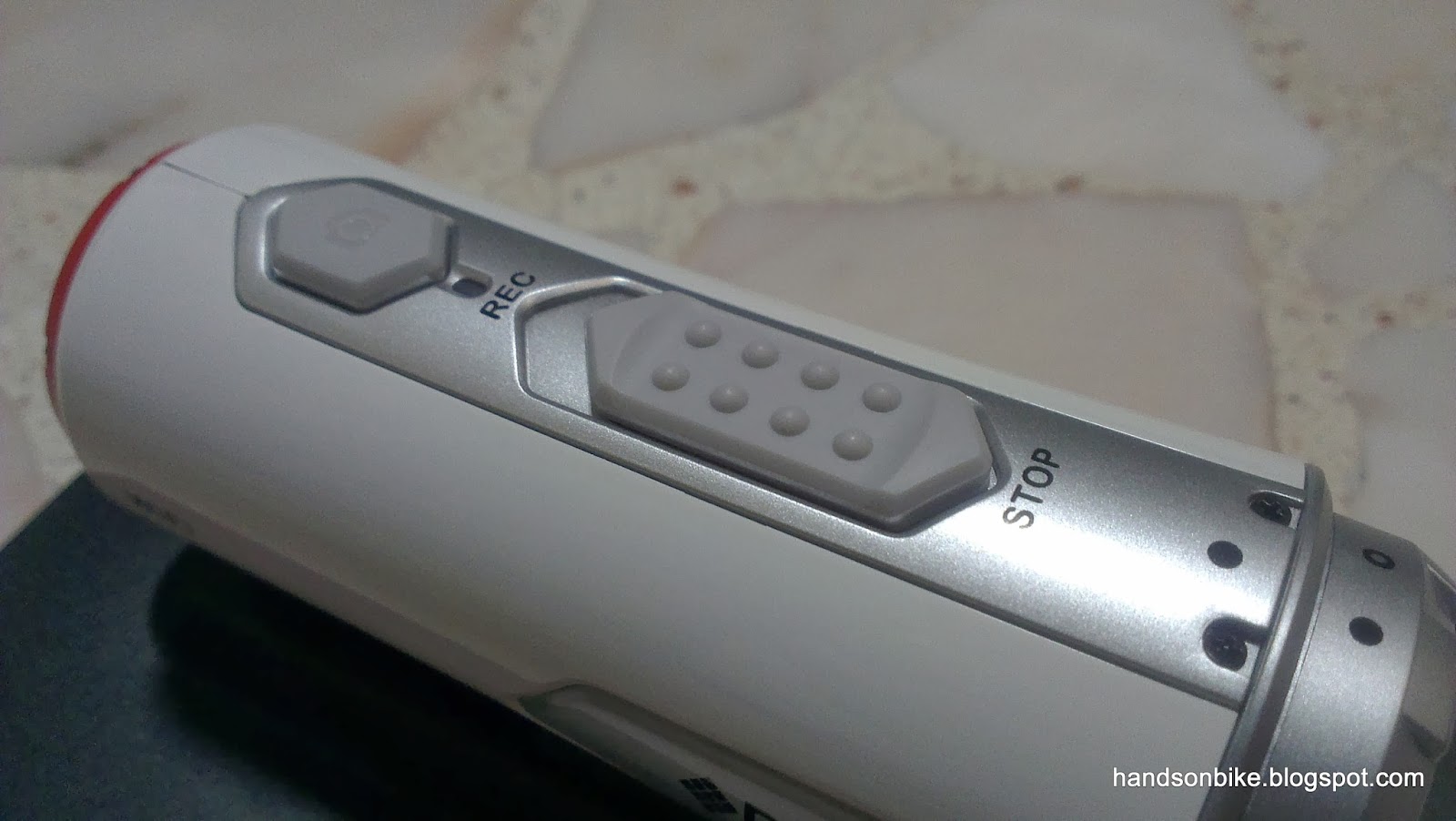 The main buttons on top of the camera. Power button at the front and a sliding record switch in the middle.

The buttons are big and easy to differentiate from each other. To turn ON or OFF the camera, just press and hold the Power button. The camera will vibrate to indicate that it is ON or OFF. When not in video recording mode, the Power button also acts as the shutter button for taking pictures.

The sliding switch will activate or deactivate the video recording. Just slide it forward to start recording, and slide it backwards to stop recording. Again, the camera will vibrate to indicate the start and end of recording.

These buttons are really easy to use, as their operation mode is different (press vs slide), and are big enough to find and operate even without looking at it (such as when mounted on the helmet out of sight). 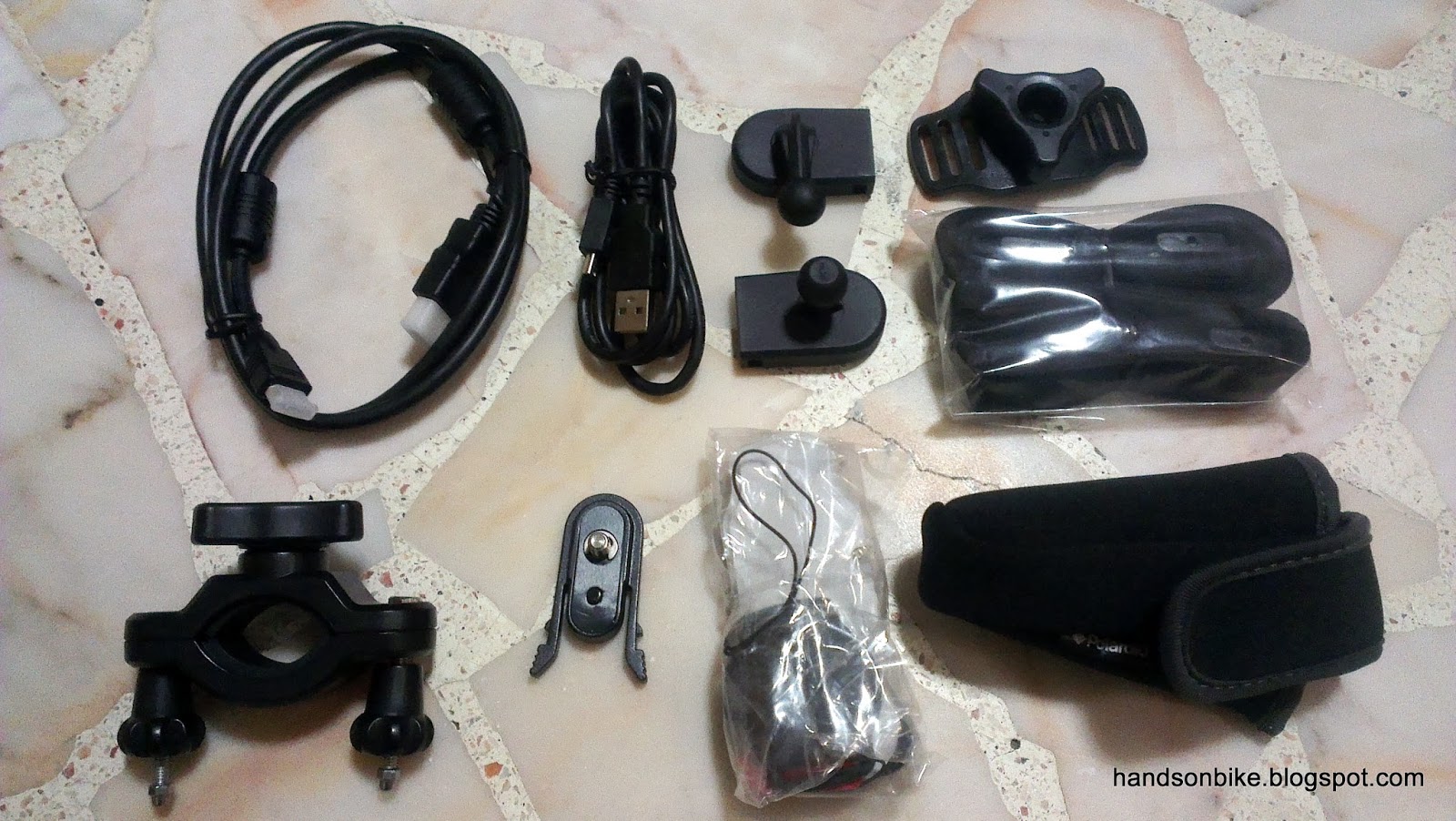 The full range of accessories for the Polaroid XS100i! 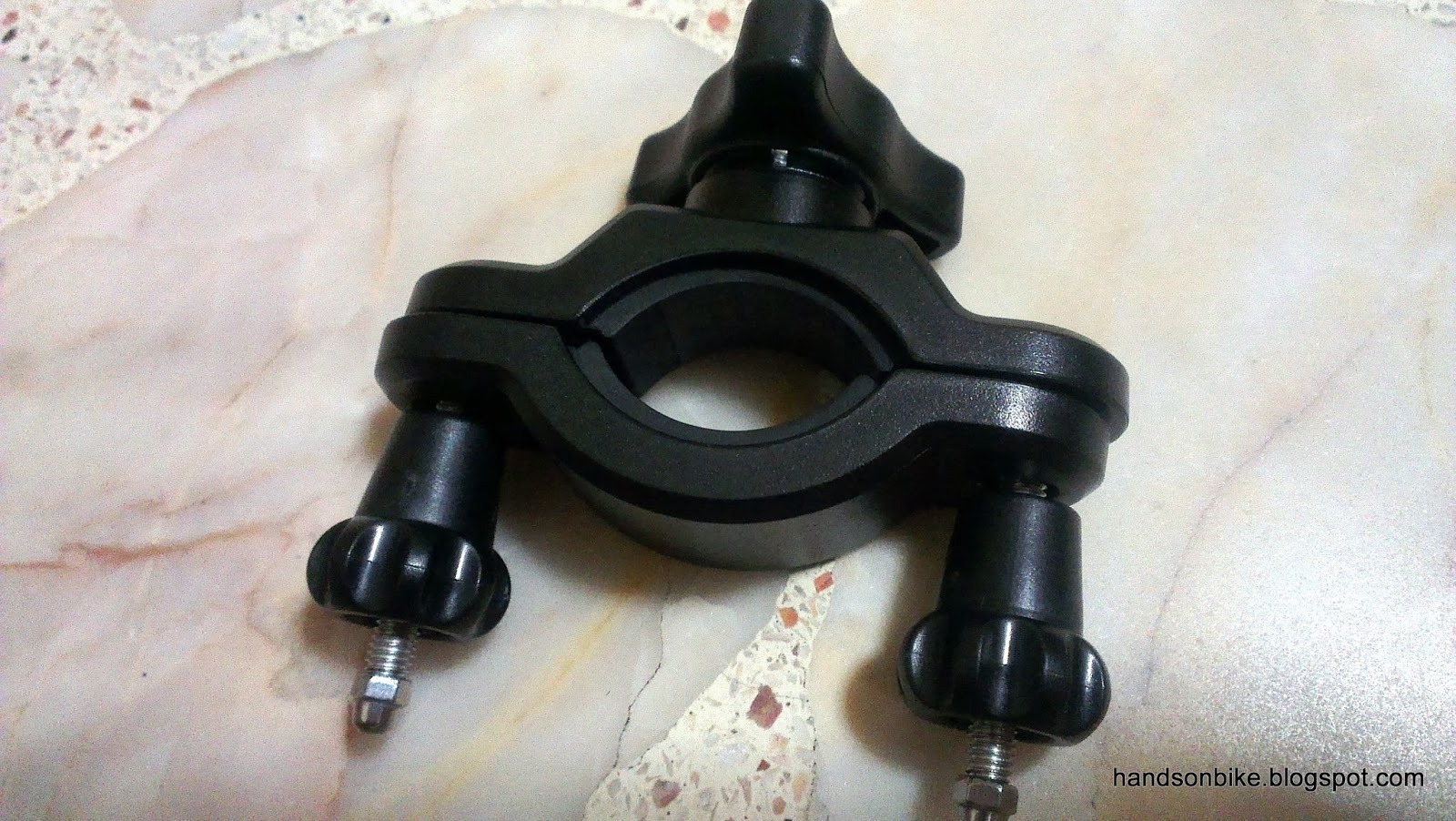 Bulky but solid mount for mounting the camera onto the handlebar 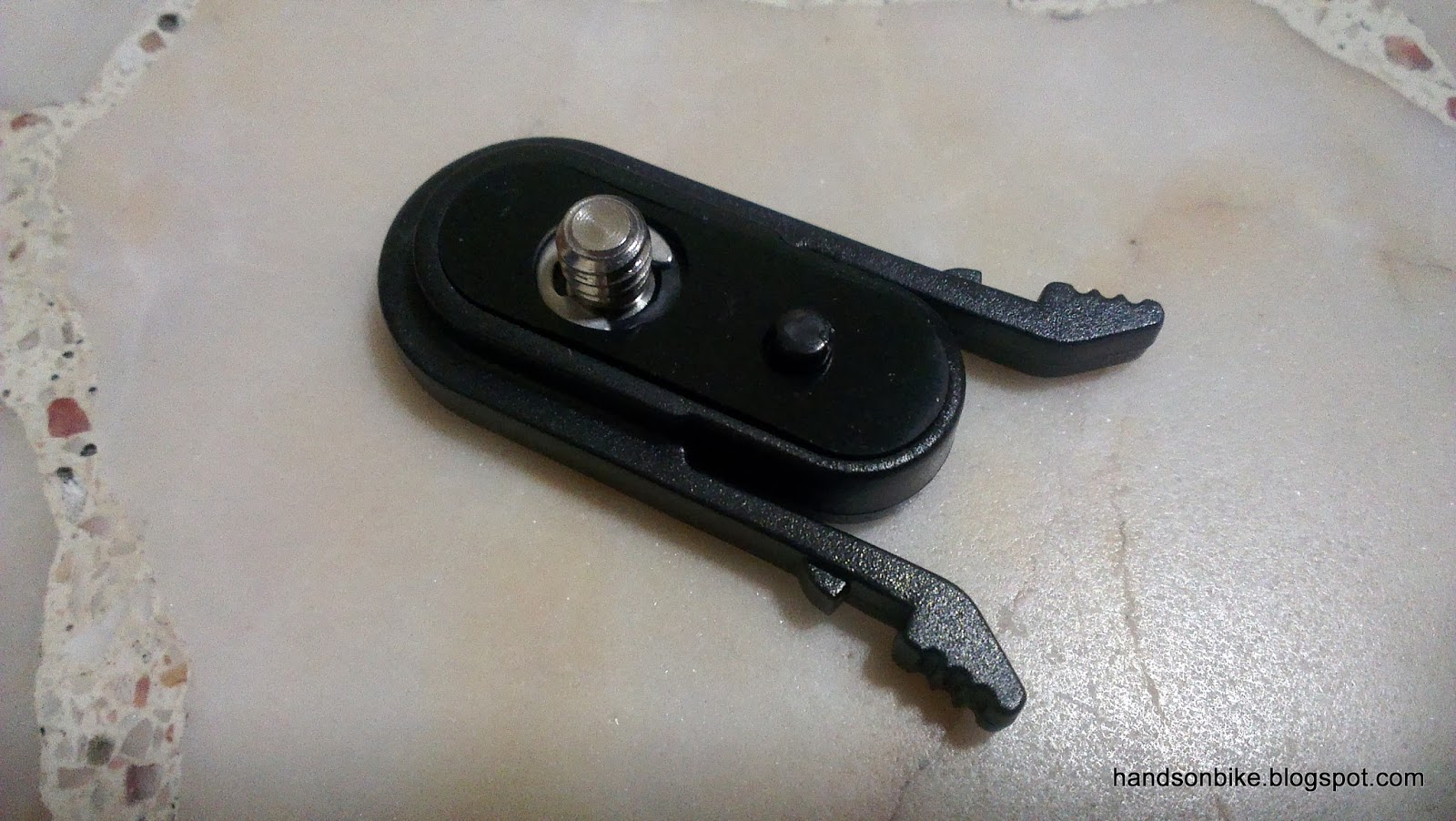 Standard 1/4 inch bolt on the adaptor mount, fits to the underside of the camera body. 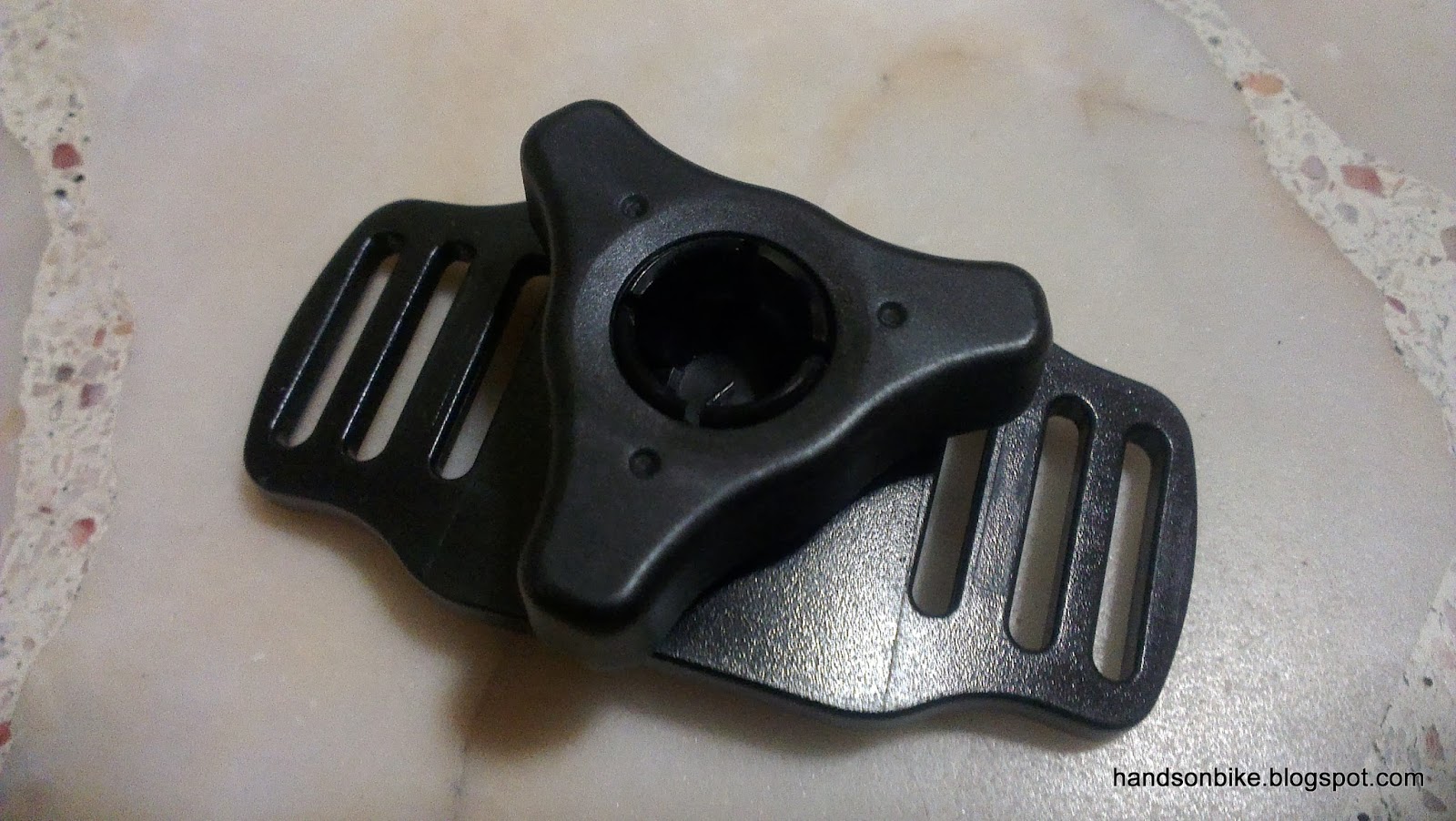 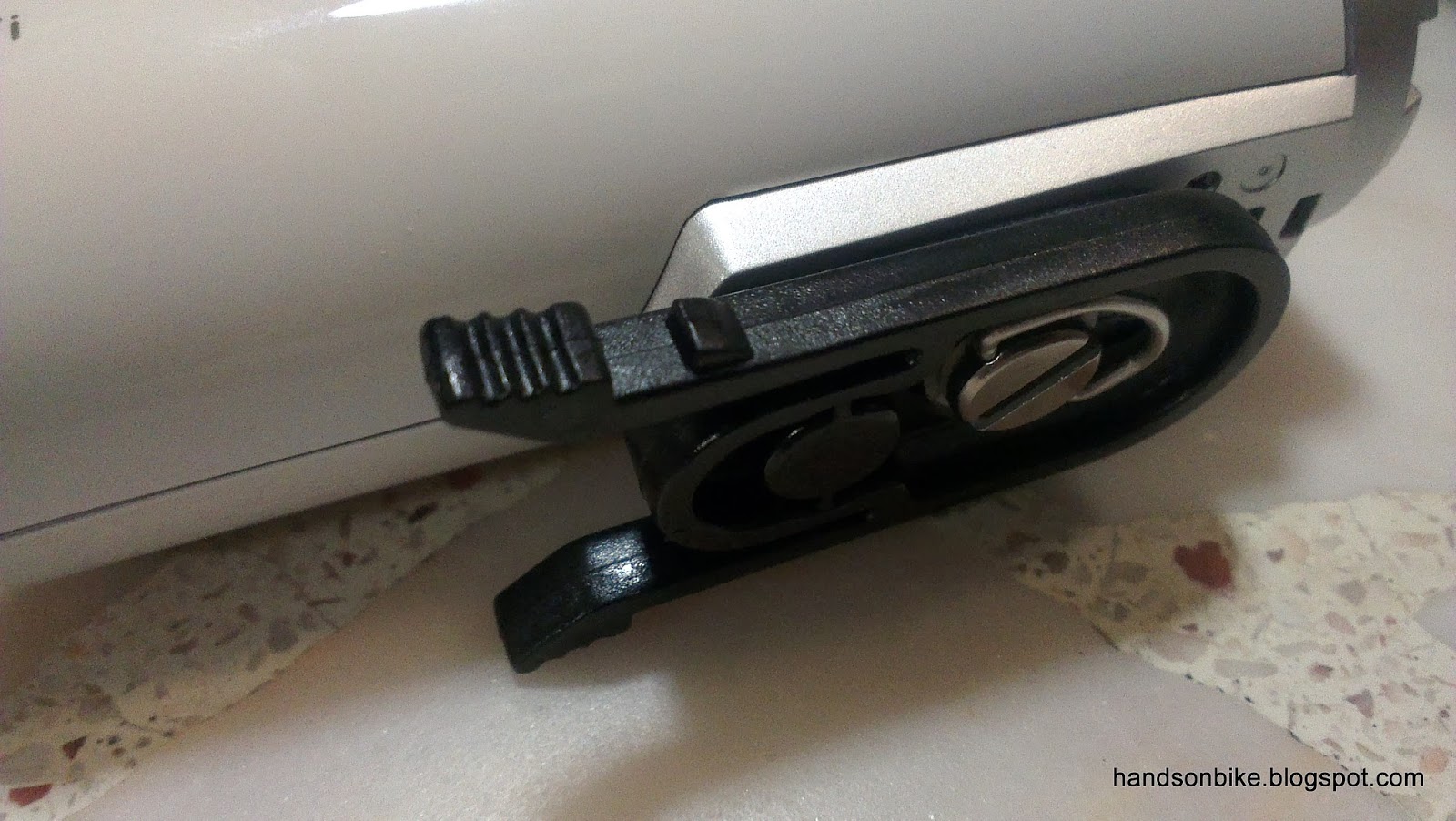 Screw the bolt to the underside of the camera body. Take note not to overtighten as the thread on the camera body is made of plastic. With this adaptor, the camera can be removed from the other mounts easily without any tools. 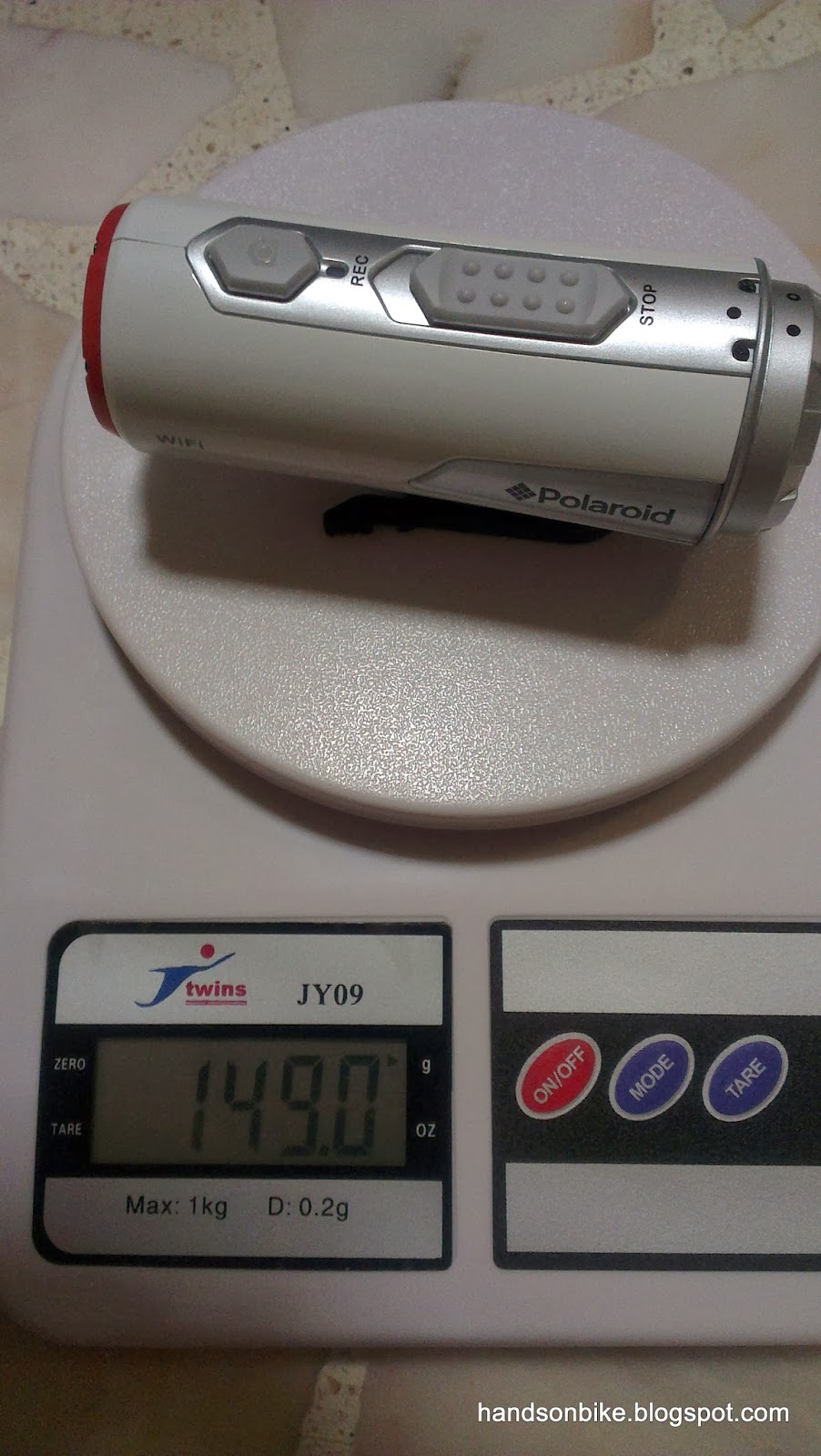 The weight of the camera is 149 grams including the adaptor, but not the mounts. 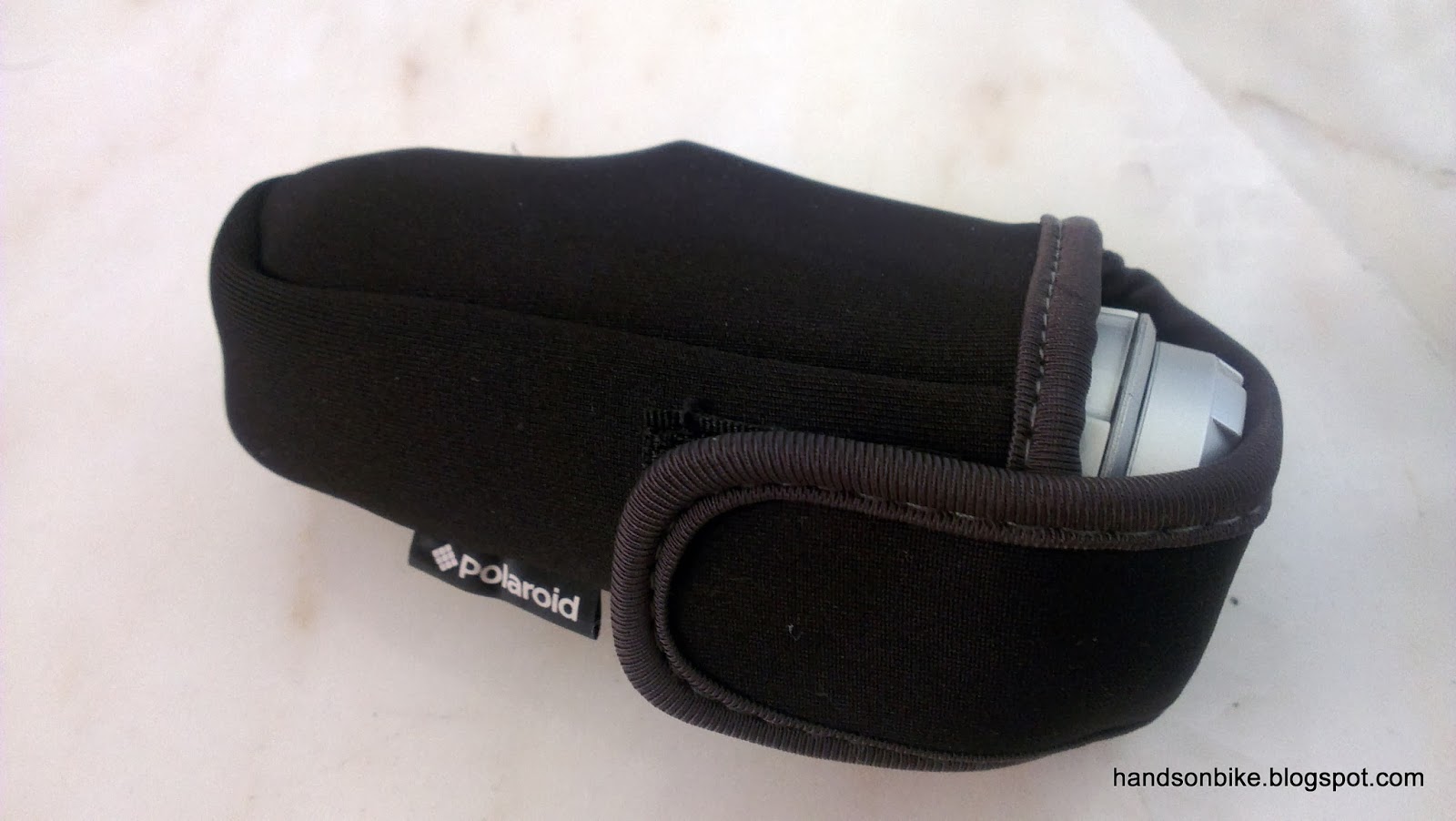 Nice pouch provided to protect the camera. Useful when I put the camera into a bag.

Helmet Mounting
Mounting on the helmet has its advantages, such as being able to record exactly what you see. When you turn your head, the camera will follow. This is useful for showing the action from your point of view. However, if you turn your head too much, the video footage might move too much for comfortable viewing. On the other hand, the head might be the only part of your body and bike that does not shake too much on rough roads.

The additional weight of the camera on the helmet might be a problem if the weight is not distributed evenly on the head. It can cause the helmet to tilt forward or backwards.

If riding through a trail, the additional height of the camera might cause it to catch or hit low hanging branches along the trail.

Compared to a bike mount, it is also easy to bring the camera along no matter which bike you ride, as long as you use the helmet with the camera mount. 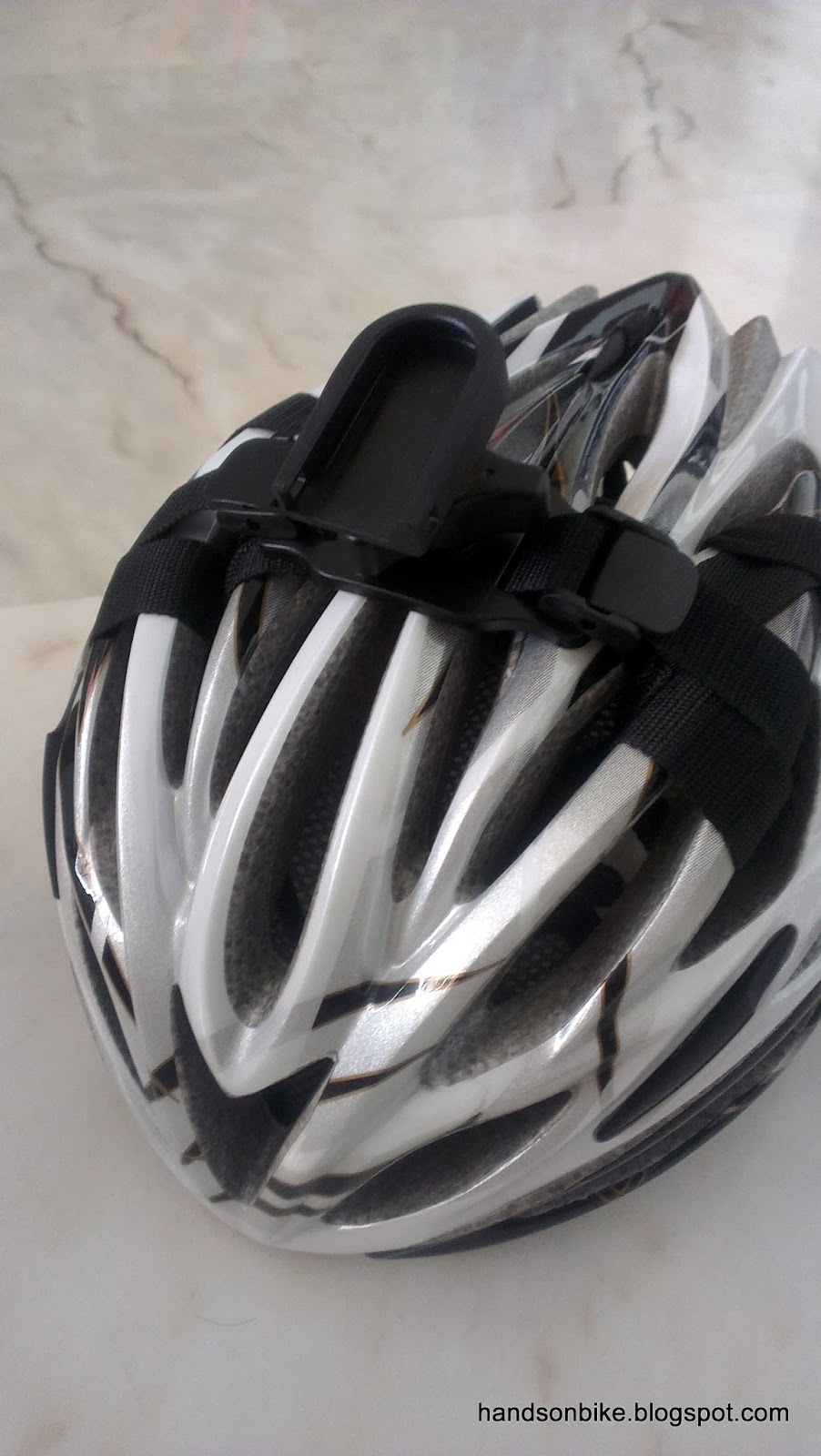 Installed the helmet mount onto my helmet! Quite tricky to mount the straps as the instructions were not clear. 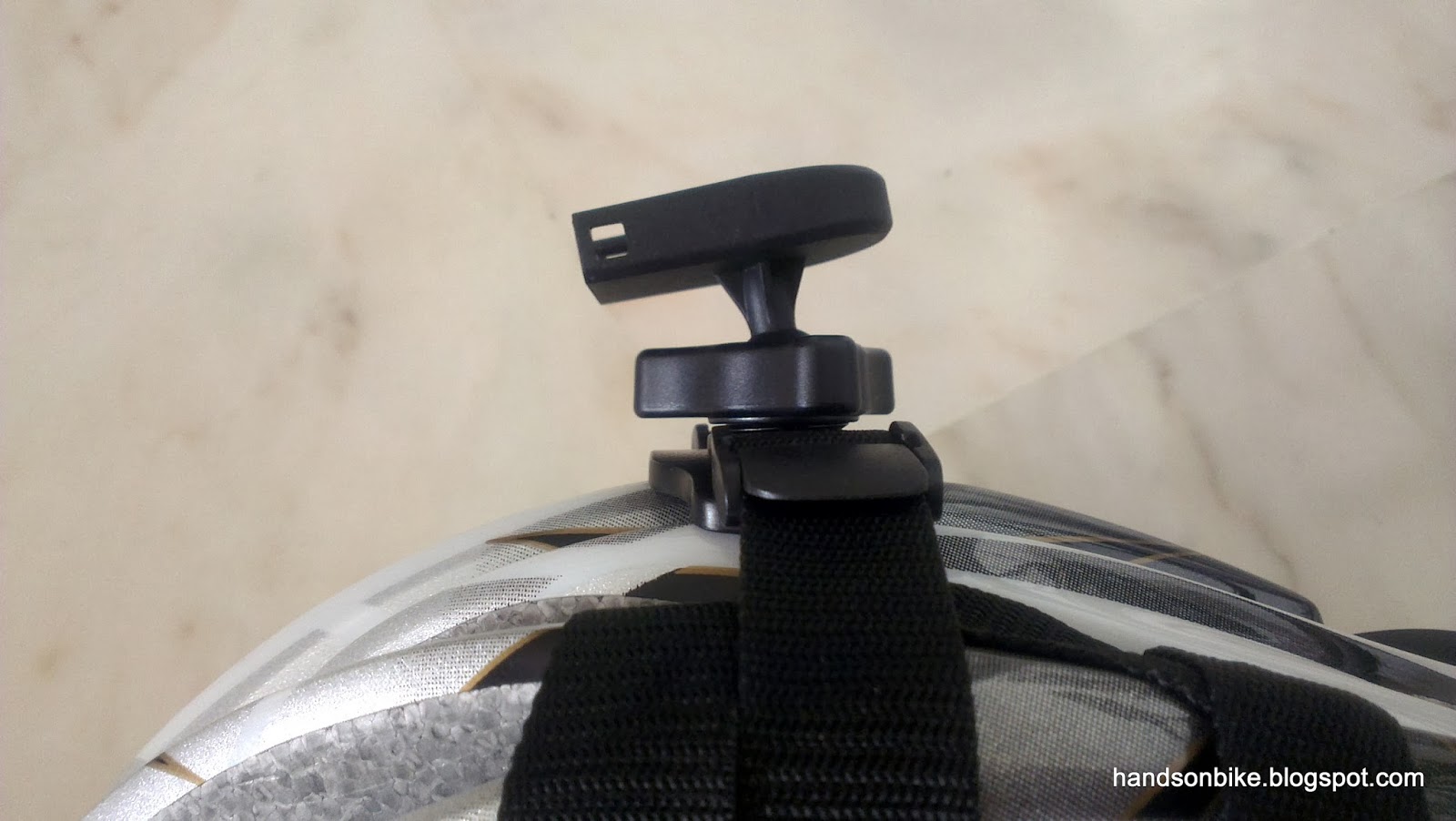 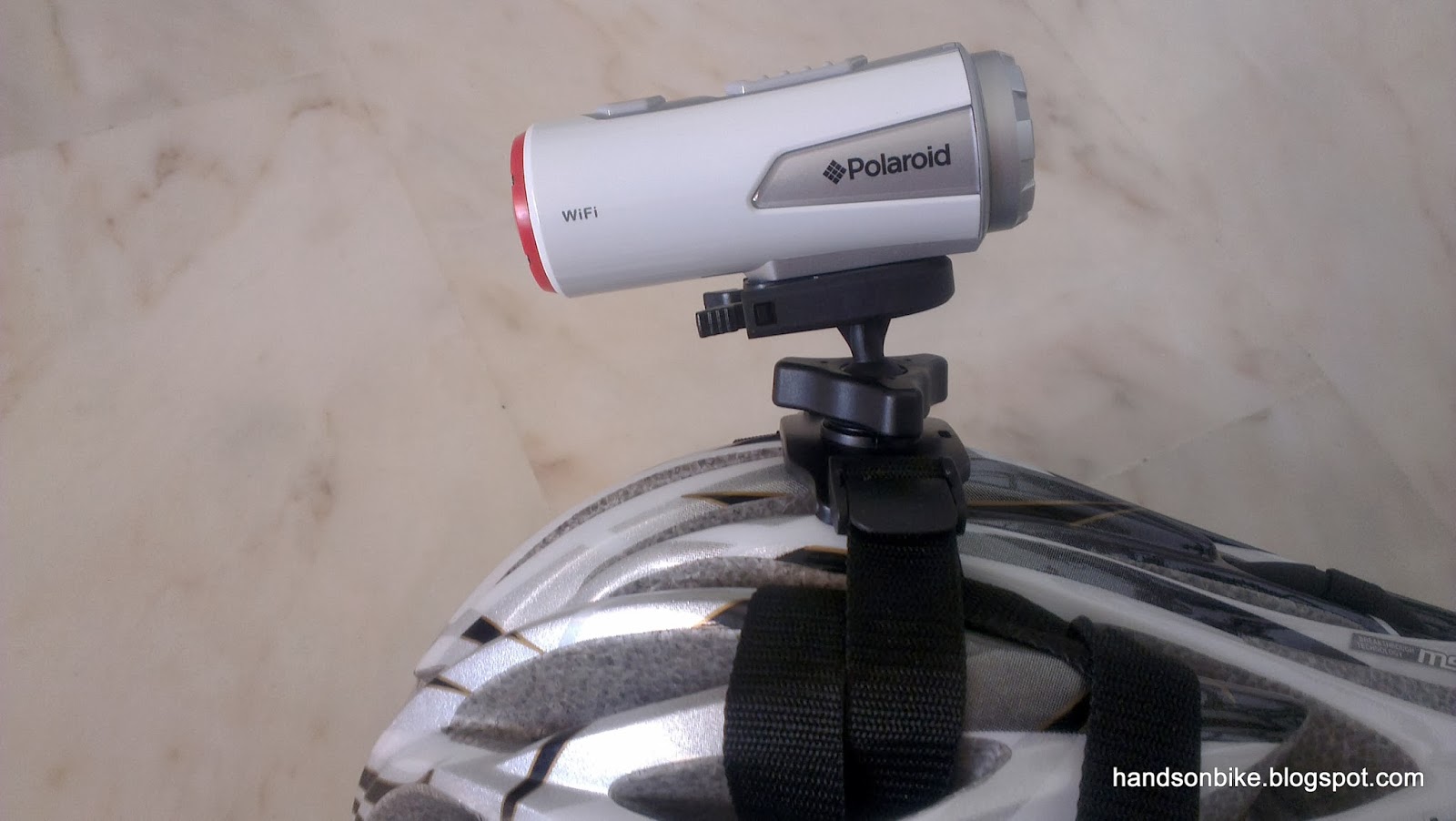 With the camera mounted on top! Sticks out quite a lot though. The weight distribution feels OK. 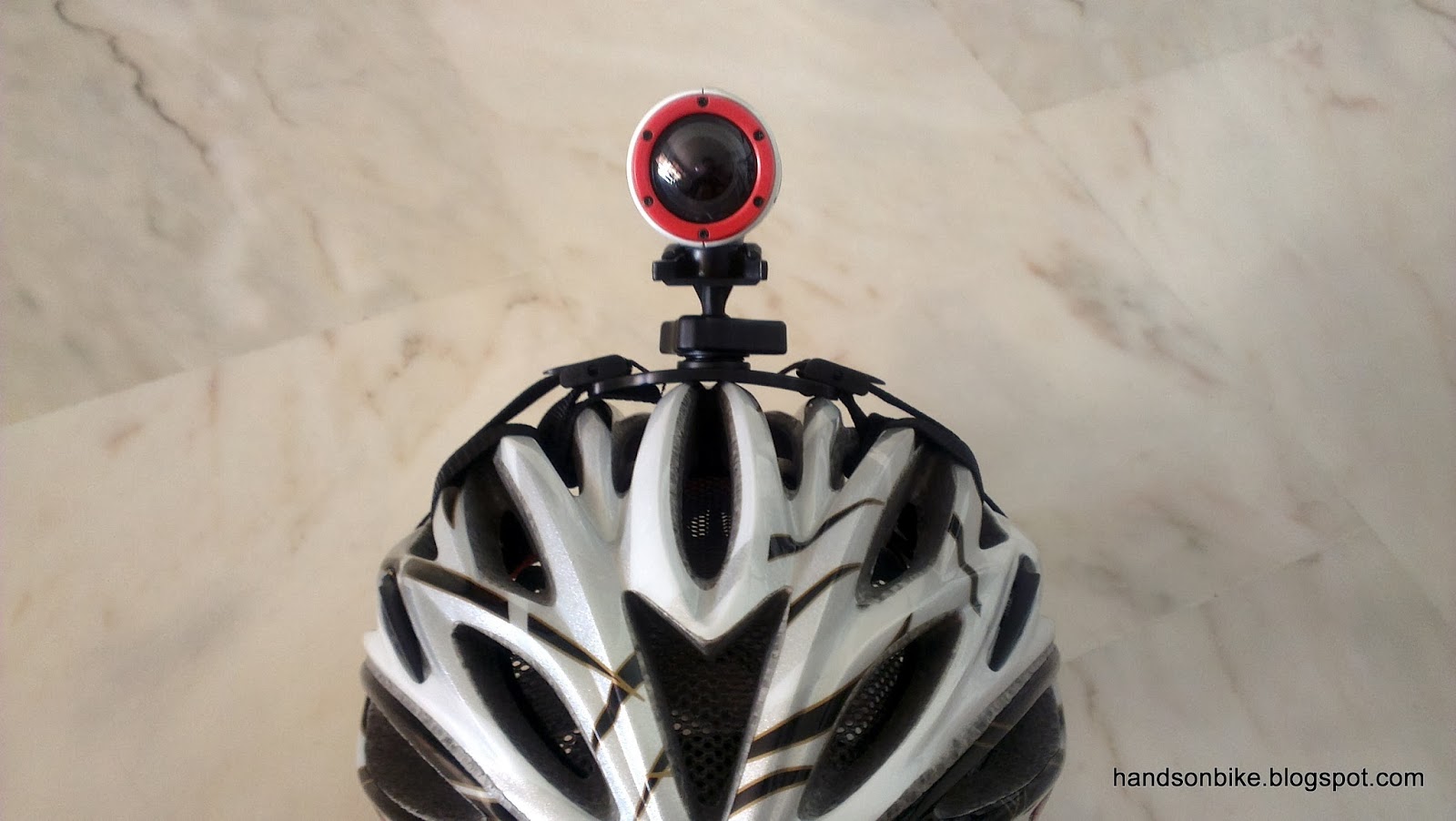 Sticks out too much in my opinion. Will give it a try anyway since the helmet mount has already been installed.

Bicycle Mount
The alternative to mounting on the helmet is to mount it on the bike instead. Usually, the camera will be mounted on the handlebars. It is possible to mount it elsewhere on the frame, but you need to get creative with using the adhesive mounts provided.

I used the clamp sideways and mounted it on the handlepost with no problems. Mounting the camera on the handlebar or handlepost means that the camera will always point in the direction that the bike is facing. Not sure if the video footage will be bumpy, need to try it out first. 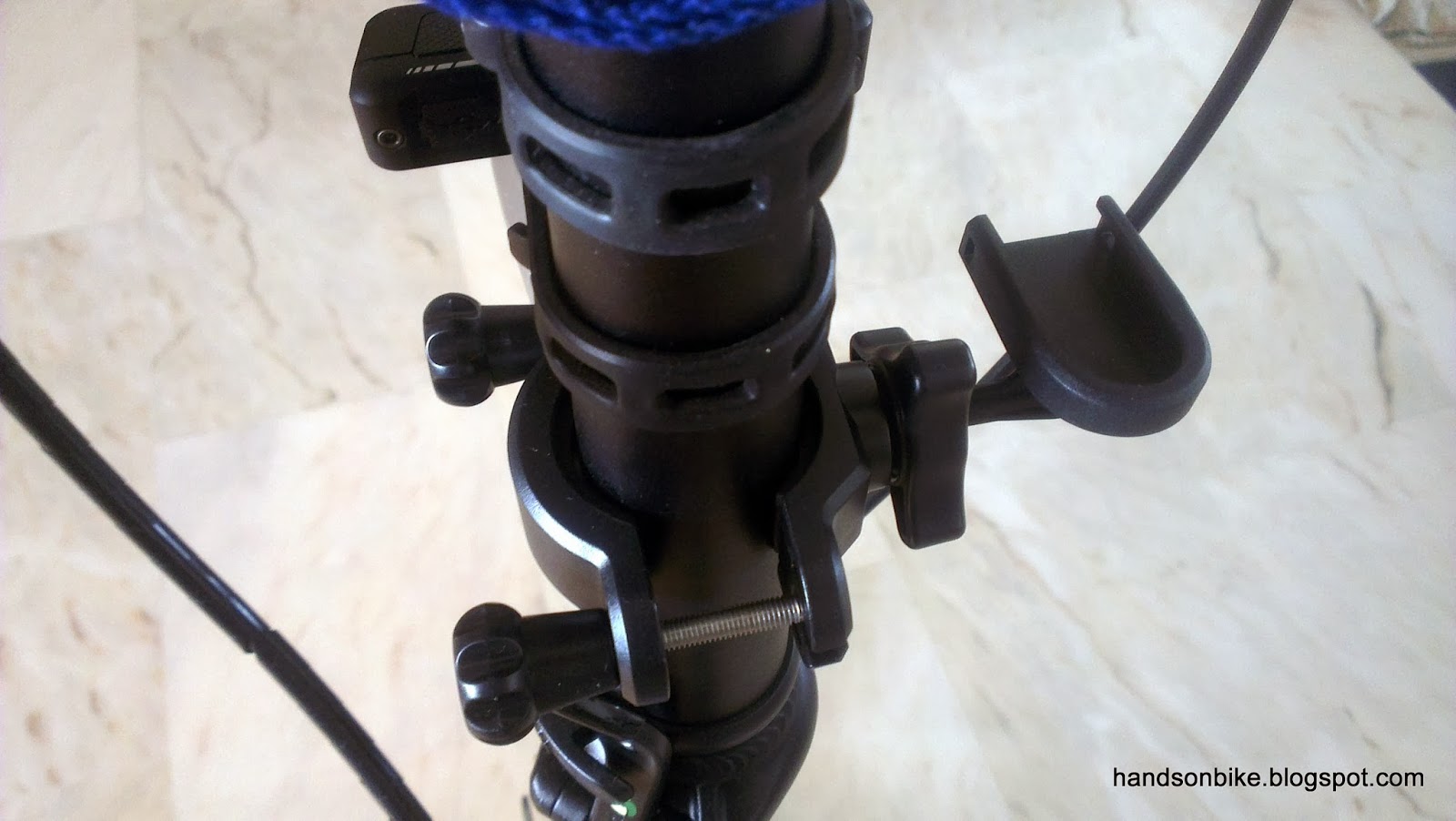 Handlebar mount used on the handlepost instead. 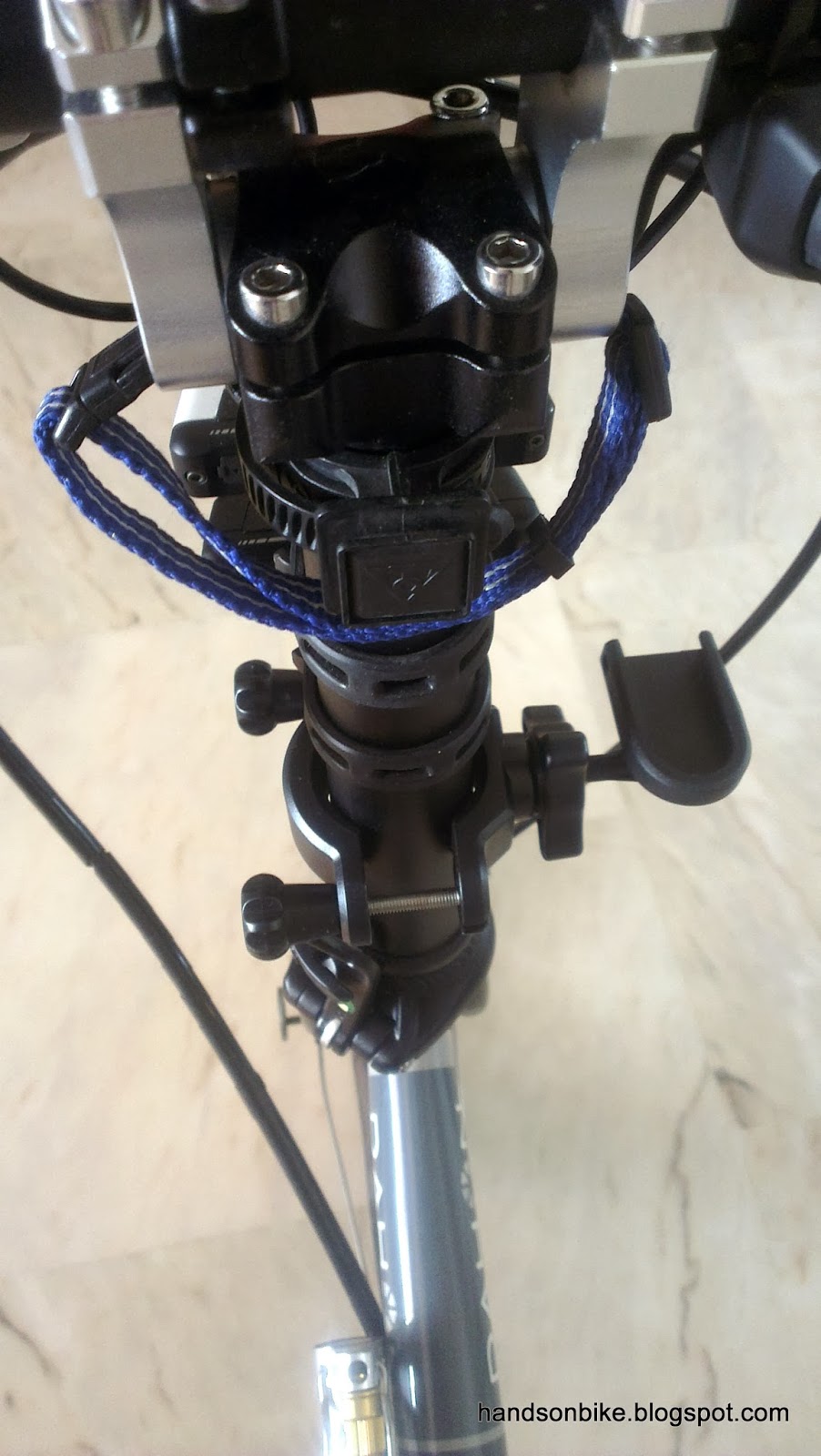 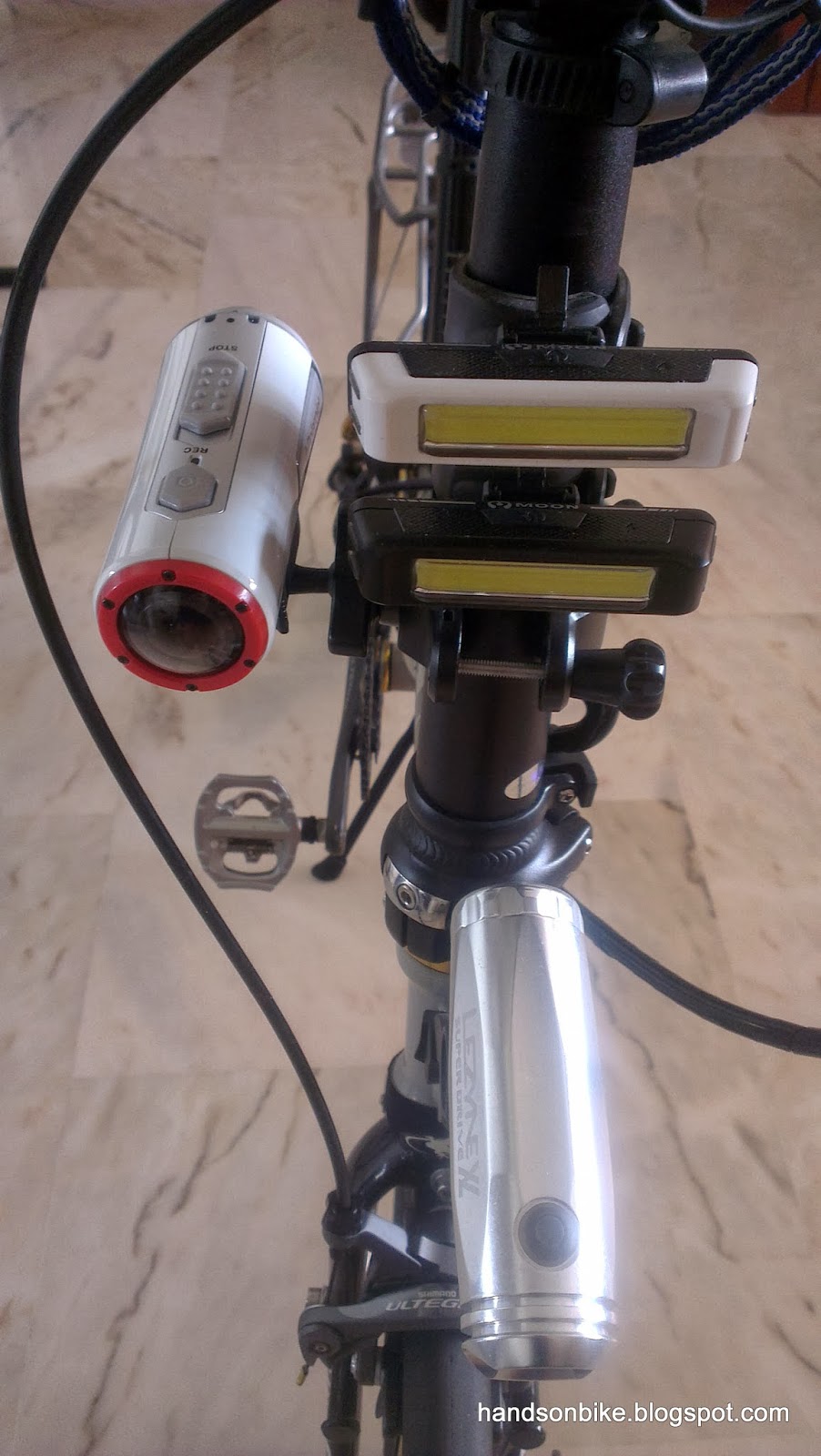 Front view of the accessories on my handlepost. The Polaroid peeks out from the side of the lights. 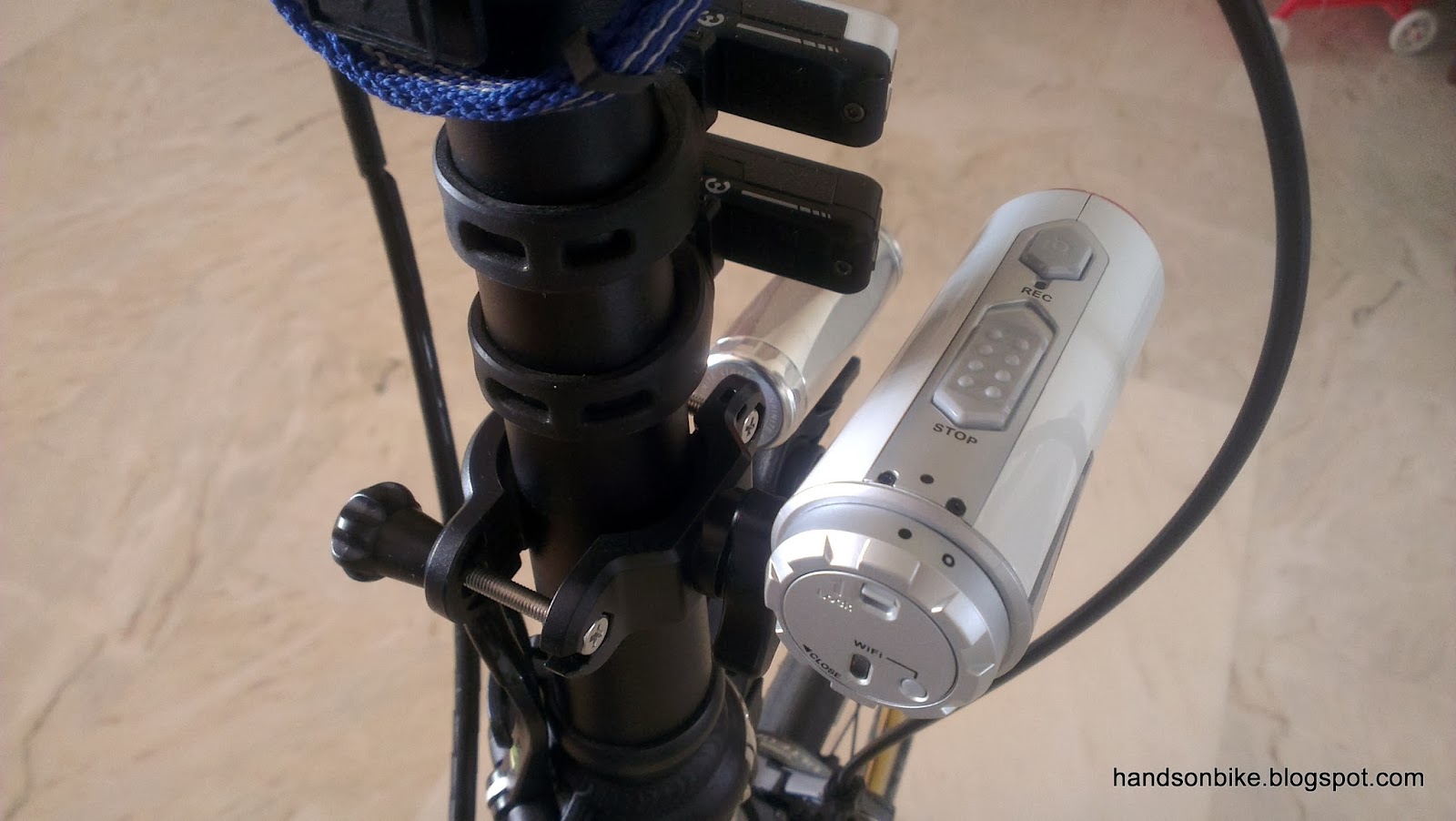 The button and switch on the camera can be seen and accessed while riding. 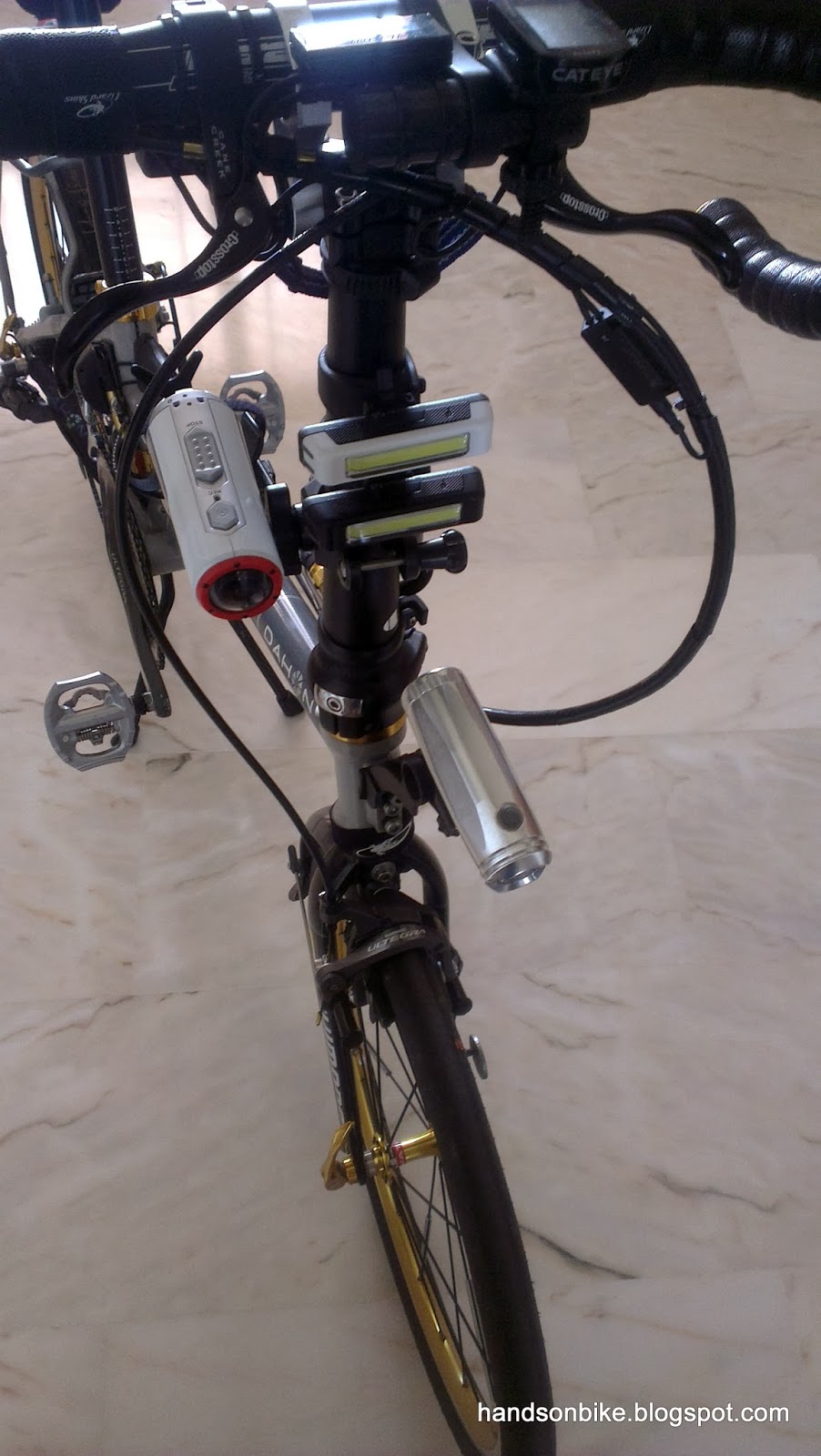 Overall view of the Polaroid XS100i camera mounted on the Dahon Boardwalk.

Well all this is just about the initial unboxing of the camera and the installation on the bike and helmet. Next, I will try the camera out and see how well it works!.