The two most popular road groupsets are Shimano Ultegra and Shimano 105, and this is largely due to the value and performance that these two groupsets have.

Ultegra is the second tier road component, just below the top end Dura-Ace. It has 90% of the function and performance of Dura-Ace, and yet cost half the price. It is a great buy for those who value performance and are willing to spend a bit more than average.

As for Shimano 105, it is the third tier road groupset, just below Ultegra and above Tiagra. This is probably the most popular and common groupset for road bikes in most countries. With performance that is probably 70-80% of Dura-Ace, and at one-third the price of Dura-Ace, it is great value. It weighs a bit more than Ultegra, mainly due to higher usage of steel as compared to aluminium for Ultegra. It is perfect for those who want to experience high end technology but are on a tighter budget.

This time, I will compare the crankset of Ultegra 6800 and Shimano 105 5800, both of which are 2x11 speed road cranksets. Let's take a look at their physical differences and similarities before comparing the technical differences.

In order to make a more thorough comparison, I removed the chainrings from the crank arms and compared them separately. 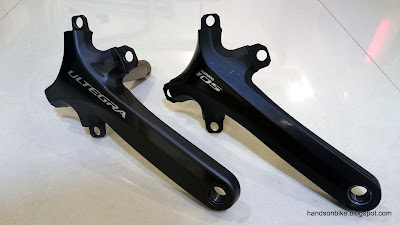 Ultegra has a dark grey finishing, while 105 has a black finishing. Both will match well with most bikes. From far, these look similar, except for the size and shape of the logo. 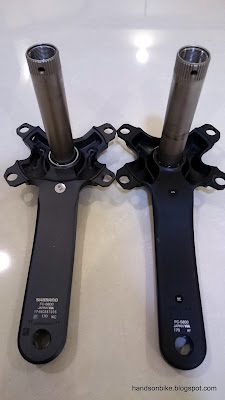 The back of the crankarms also look similar, with not many obvious differences. 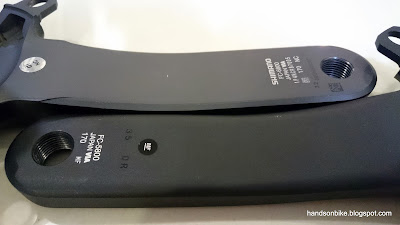 The Ultegra crankarm (top) has a chamfered edge, while the 105 crankarm (bottom) has a more rounded edge. 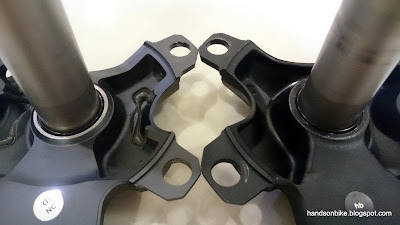 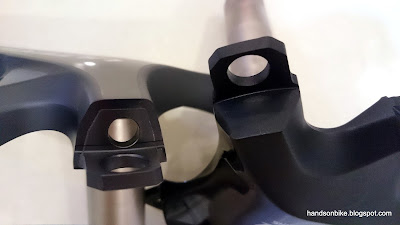 Another view showing the difference. The Ultegra crankarm has a joint line, while the 105 crankarm on the right does not. By making the crankarm in one piece, it eliminates the bonding process and lowers the production cost of the 105 crankset. 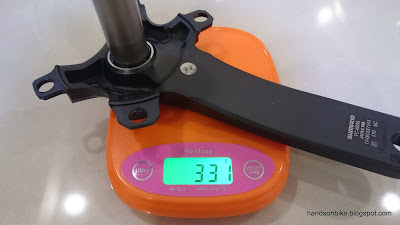 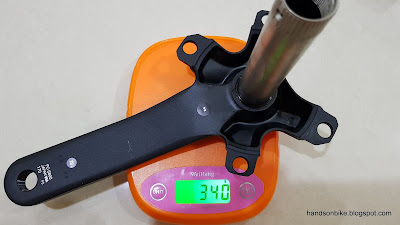 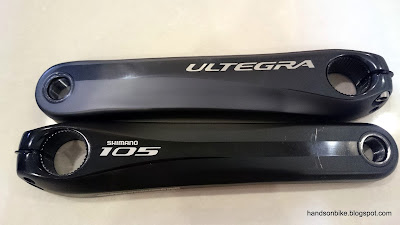 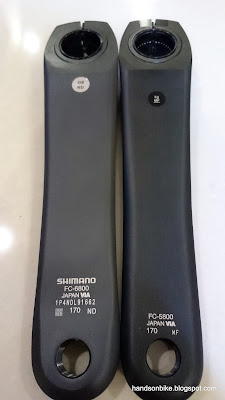 The 105 crankarm on the right side looks a bit slimmer at the middle portion. 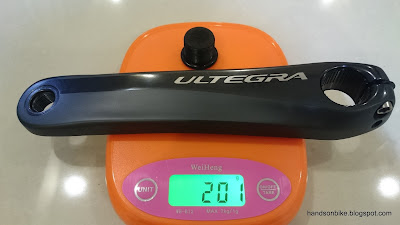 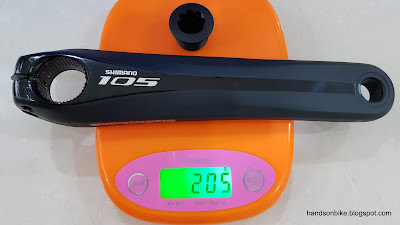 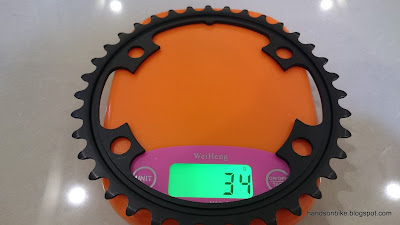 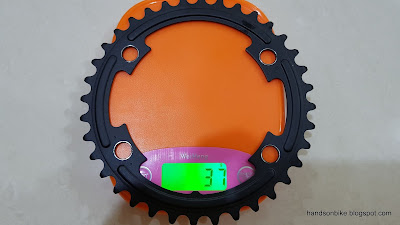 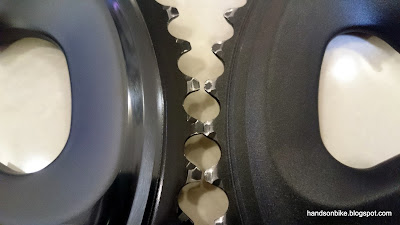 Ultegra chainring on the left has an aluminium shell bonded to the outside of the teeth, while the 105 chainring teeth is one piece with the outer shell. 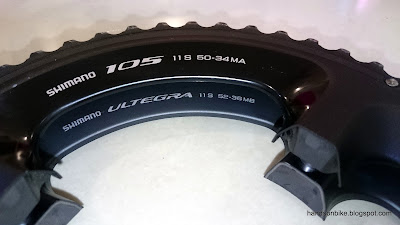 105 chainring on top is basically made up of an aluminium shell, which ends in the gear teeth at the edges. Ultegra chainring teeth and the shell are made separately and bonded together. 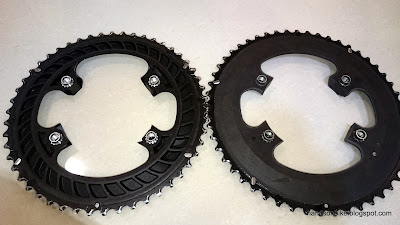 Big differences when viewed from the back. Ultegra chainring has the original Hollowglide chainring construction, which is made up of a ring of gear teeth, bonded on both sides by the outer shell and inner shell, which makes it hollow and yet lightweight and rigid.
Shimano 105 chainring is a lower cost version, with an outer aluminium shell + teeth on the outside, and a composite structure on the inside for strength and rigidity. 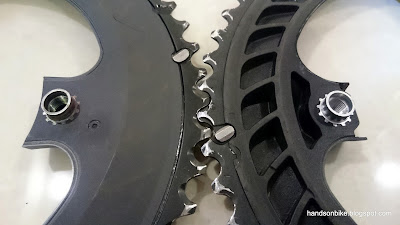 Closer look at the differences in chainring construction. 105 chainring on the right side with composite material and lots of ribs. Gives the rigidity of a Hollowglide construction but at lower cost. 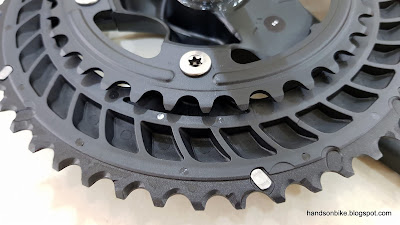 A closer look at the injection molded ribbed design at the back of the 105 large chainring. 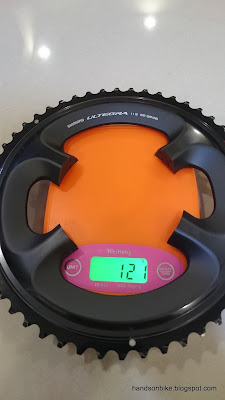 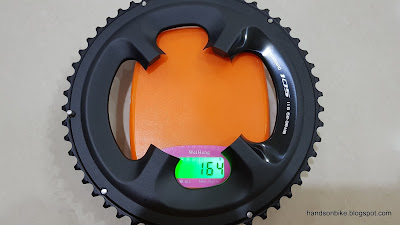 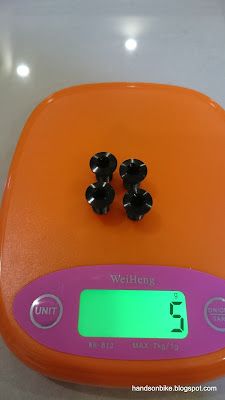 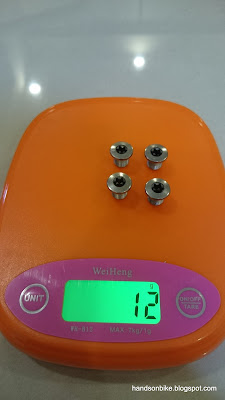 105 has the more standard steel chainring bolts which weigh a bit more at 12 grams.

In my opinion, the differences between these crankarms are mainly cosmetic, with lower cost construction methods used for the lower priced 105 crankset. Every component of the Ultegra crankset weighs just a bit lighter than the 105 crankset, which all adds up to give the total weight difference. Otherwise, the performance should be similar, which makes the 105 crankset great value as it is affordable and yet works well.
at October 09, 2016