Time for a new bike! I have owned and modified many bikes, but have never owned or modified a Brompton before. Before this, I never had a need for a Brompton as I have my other Dahon folding bikes if I need a compact fold. Now, I plan to put a child seat on a bicycle, and I have thought about which of my bikes to put the child seat.

I prefer to have the child seat in front of the rider, which means that all the bikes with drop bars are out. This means that the Java Freccia mini velo, Merida Scultura 5000 road bike and Avanti Inc 3 cannot be used. As for the Dahon MuEX or the Dahon Vitesse, only rear placement child seats can be installed on the seatpost, which will add on more weight to the rear of the bike and possibly make it easier to tip over backwards. Also, it will be good to put the child's weight at the front of the bike to balance out the rider's weight, instead of adding more weight to the rear of the bike. 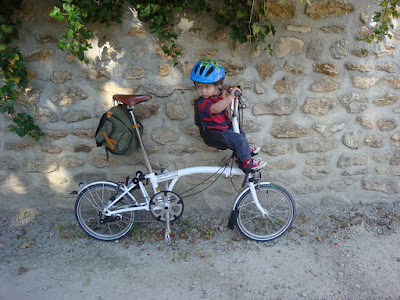 Then, I came across the Bobike child seat mounted on the Brompton, and I knew that it was the one that I wanted. Problem is, I did not have a Brompton. I considered getting replica Bromptons such as the Cigna or the 3Sixty, but I was not too impressed with the folding which is still not good enough. Besides, I was reminded of the Flamingo bike that I had previously which was a Brompton replica, and it was just not good enough. Instead of having to fix problems here and there from getting a replica bike, I decided to get a real Brompton and also get a chance to study the real thing.

Initially, I had considered getting a 3 speed Brompton, but 6 speed Bromptons are more common. Besides, no harm having more speeds just in case I need to climb up slopes with extra weight from the child. 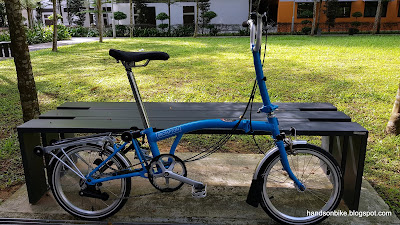 Brompton M6R in Lagoon Blue on all frame parts! 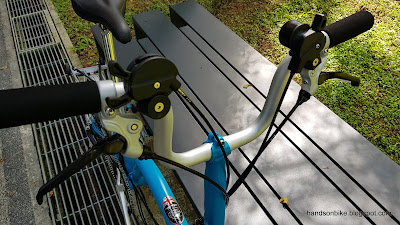 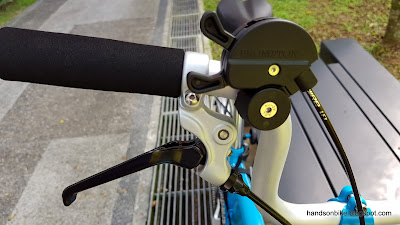 3 speed shifter for the Sturmey Archer hub. At least the brake levers are nice. 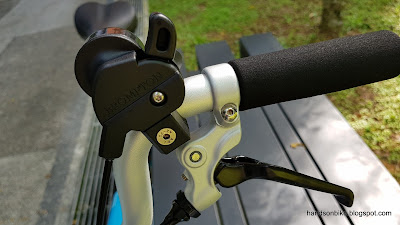 2 speed shifter for the 2 speed rear derailleur. Foam grips, not so nice. 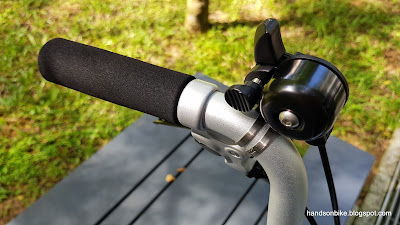 2 speed shifter is integrated with a bell 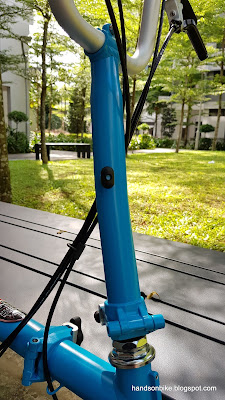 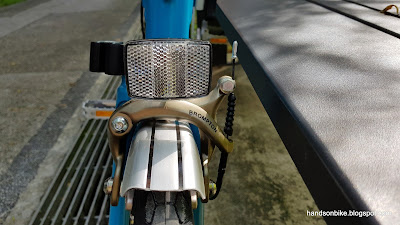 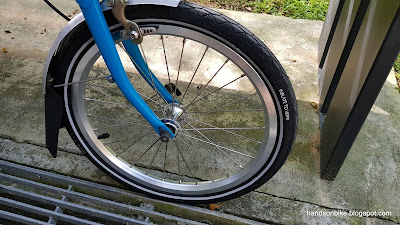 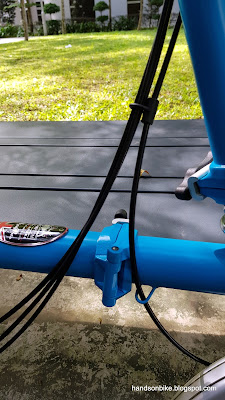 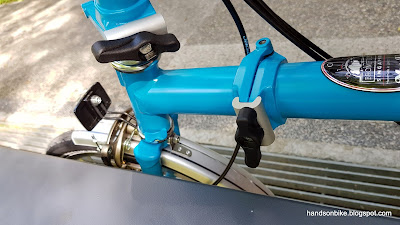 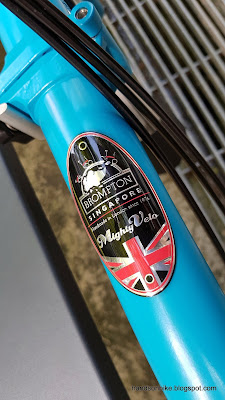 From the local distributor 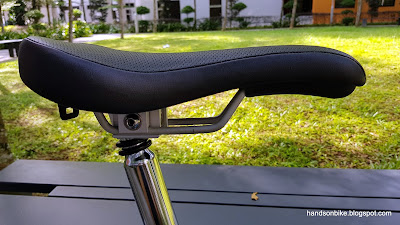 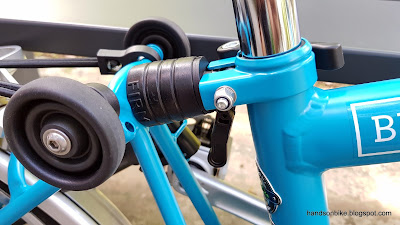 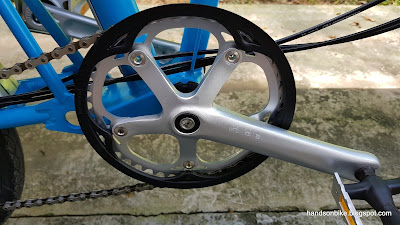 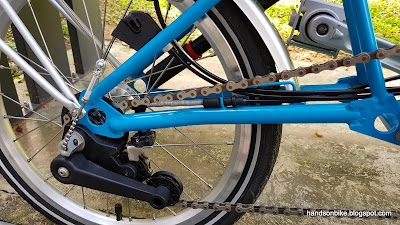 Rear drivetrain and shifting components. Looks rather haphazard with lots of exposed bits. 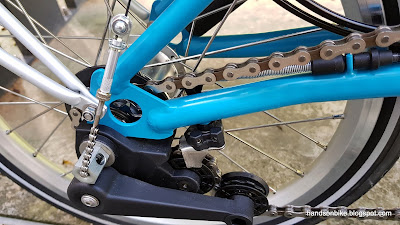 Indicator chain that controls the 3 speed hub, along with the 2 speed side swing rear derailleur and the chain tensioner 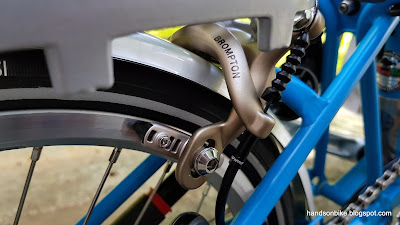 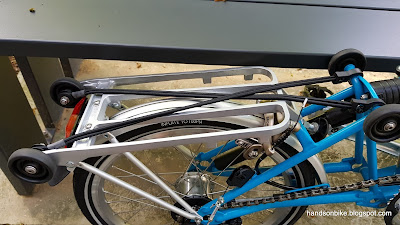 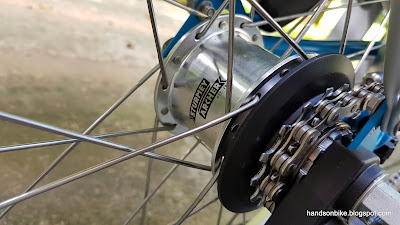 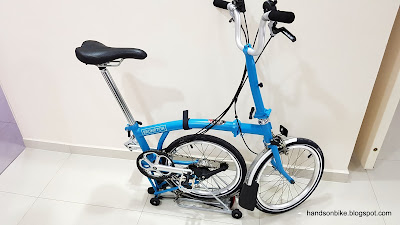 In parking mode, with just the rear triangle folded under the frame 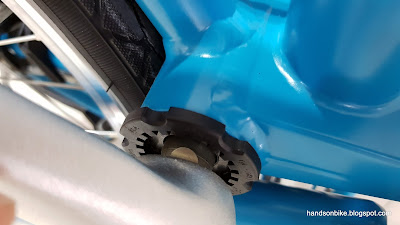 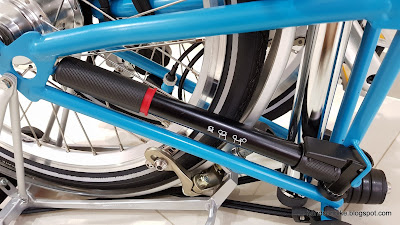 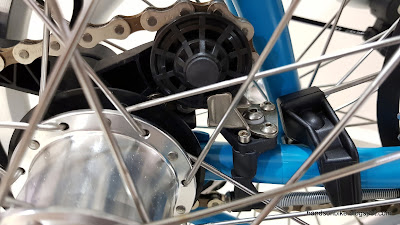 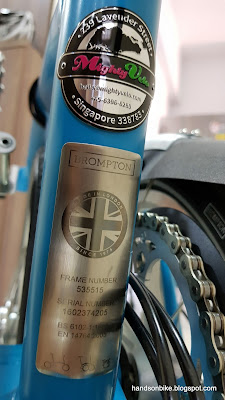 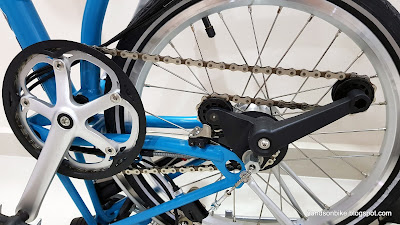 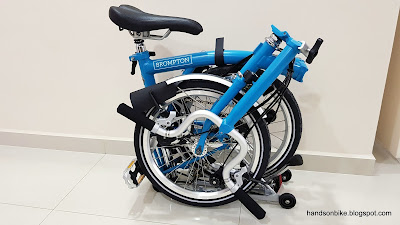 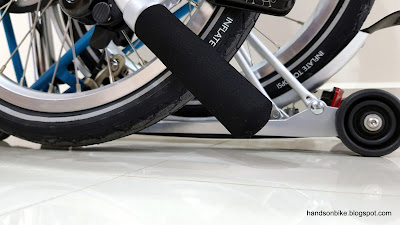 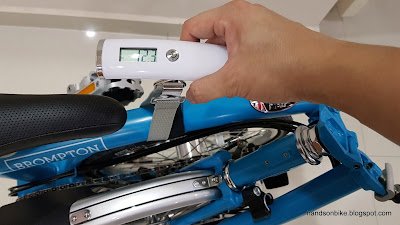 This bike will be mainly used to carry the child when I cycle, so that everyone can ride together. Cutting weight from this bike is not necessary as there is not much point. Reason being that this bike has a heavy steel frame, and so any weight savings from components will be quite insignificant. From my experience, reducing the bike weight from 12 kg to 10 kg does not make a big difference, as it is still relatively heavy. Also, putting a child of 10+ kg onto the bike will negate any weight loss. Lastly, there is no need to carry the bike when folded, as I can roll it along most of the time.

I have already identified a few areas on the bike that can and should be improved, and these upgrades will be made soon. These upgrades will not make the bike any lighter or ride any faster, but are mostly cosmetic and functional upgrades.
at June 28, 2017