It has been 5 years since I bought the Polygon Cozmic CX3.0 mountain bike, and some components are way overdue for a change! For example, the tires are still the stock Kenda tires, and it is definitely time to change it after 5 years.

At the same time, I decided to install the 12 speed S-Ride upgrade kit, just to see how a 11-50T cassette feels like. As shown in detail in the previous post, this 11-50T 12 speed cassette can fit on a standard 9 spline freehub body, which means it can be installed on the my stock Shimano MT55 26" wheelset.

For the choice of new tires, there is not such a wide range of 26" tires available, as the market has mostly moved on to 27.5" and 29" wheels. Still, the range is wide enough to make it a tough choice to choose a new tire. After much research, I finally decided on the tires shown below.

I needed to take into account the tire width, as the latest generation of 26" tires are normally wider than the stock Kenda tires which are only 2.1" wide. Due to frame and fork limitations, it is not possible to run tires that are too wide.

Based on my visual estimation, there is enough space to fit in a 2.2" wide tire, instead of the stock 2.1" tire. 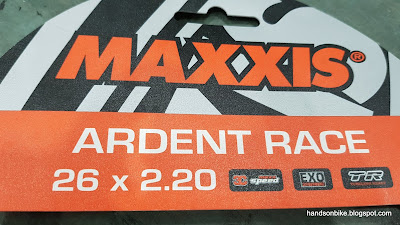 Maxxis Ardent Race tires, which is a good choice for most terrain, including some on-road riding. 2.2" wide which I think is the maximum that can be installed on my Polygon frame. 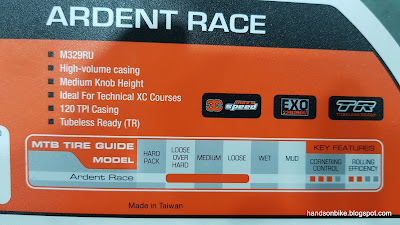 Some technical information on these tires. There are so many tire choices that it is hard to choose one. 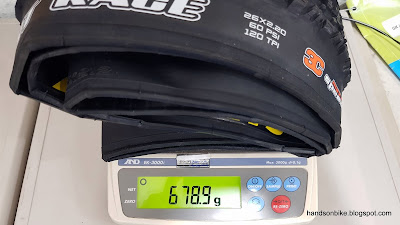 679 grams per tire, which is on the heavy side for a 26" tire. Just for comparison, road bike tires are only about 260 grams each! 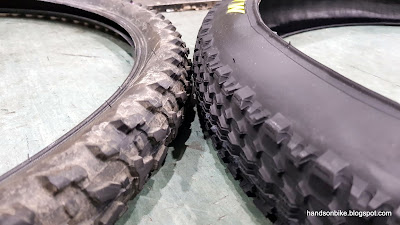 After removing the stock Kenda 2.1" tires, it is compared to the new Maxxis 2.2" tires. 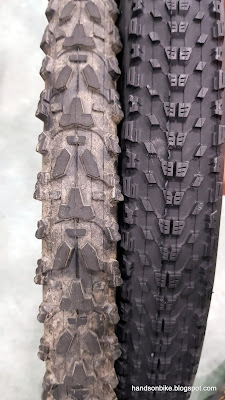 Look at the big difference in width! The difference will be less once mounted on the rims. Not sure which tread pattern (along the central channel) will roll better on the road... 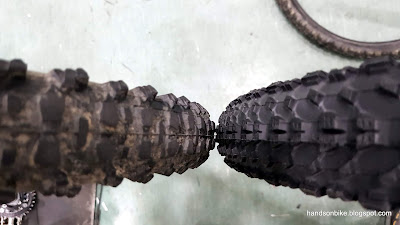 Comparing the new 2.2" Maxxis tires with the stock 2.1" Kenda tires, after mounting on the rims. Noticeable increase in width, hope it fits into the frame! 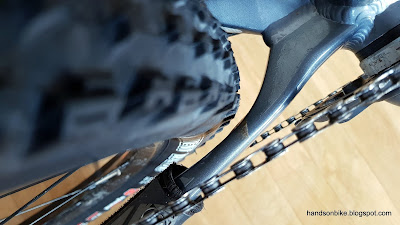 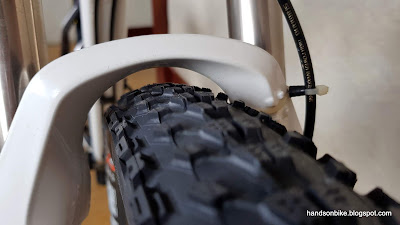 Front tire clearance with the arch on the front fork, also barely acceptable.

I am relieved that the new Maxxis Ardent Race tires, which are 2.2" in width, is able to fit my frame and fork. This extra width will provide extra grip when riding off road.

Other than new tires, I decided to get fresh grips as the previous grips were wearing out. No real need to change, but these new grips (as tested on other people's bikes) felt so much better in terms of grip and comfort, which was why I got new ones at the same time as the new Maxxis tires. 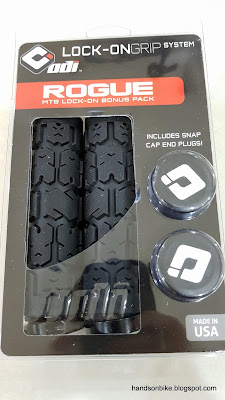 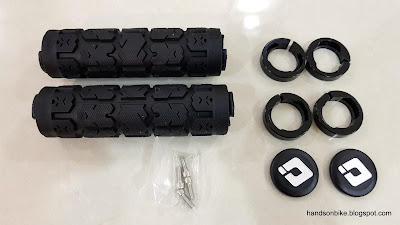 The clamps and bolts come unassembled. All the parts are the same, with no left/right or mirror designs. 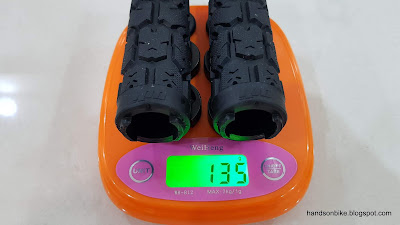 Clamps and grips weigh 135 grams. Not for weight weenies... 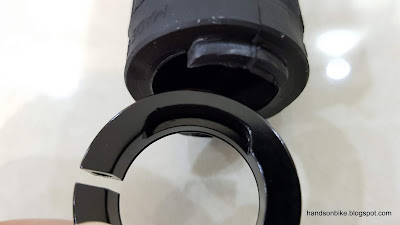 To install the clamps, need to snap fit it over the ends of the grips. 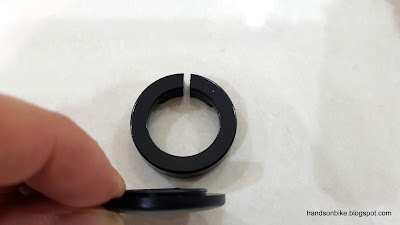 The end caps also snap into the clamps. This needs to be done before installing the grips onto the handlebar. 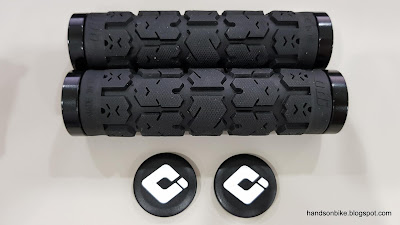 Overall view of the grips

These grips have big chunky blocks that are soft and grippy, while the clamps are well designed. One little complaint is that the grips are exactly the same parts for left and right side, instead of being a mirror image of each other. This means that I cannot position them so that the clamp bolts and ODI logo are symmetrical on the bike. No function issue, just an aesthetic one.

Therefore, if I wanted to use the S-Ride rear derailleur on the Polygon mountain bike, I needed to change the hanger to a DATT type. It may seem impossible to find, but I managed to find an online bike shop from Australia that has the hanger for my exact Polygon frame! 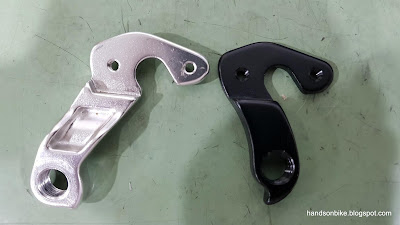 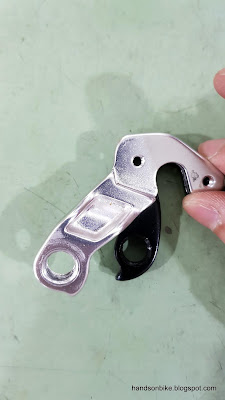 The Direct Mount design places the attachment point further back, eliminating the need for an extra link on the rear derailleur.

Once the hanger has been switched, the rear derailleur could be installed without any problems. No problems either for cassette, shifter and chain installation. Let's see how the components look on the bike! 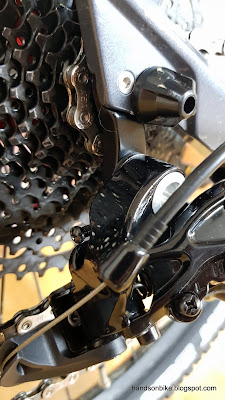 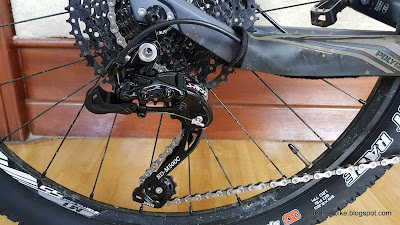 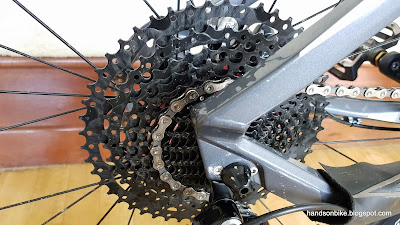 The large 11-50T cassette mounted on the rear wheel, along with the 12 speed chain. 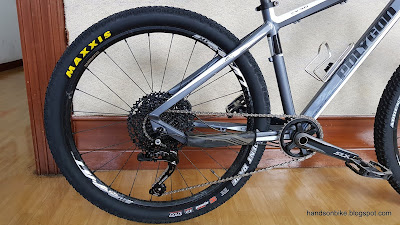 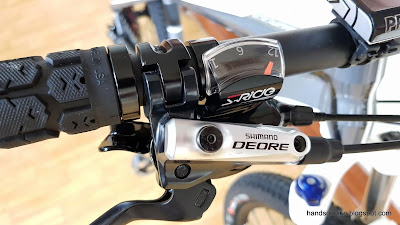 S-Ride 12 speed shifter installed! The gear display is nice to have, especially since there are so many gears on the cassette. 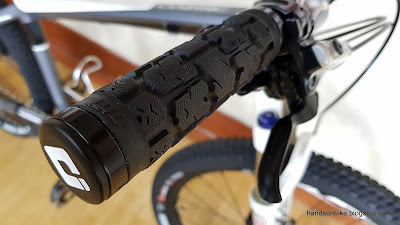 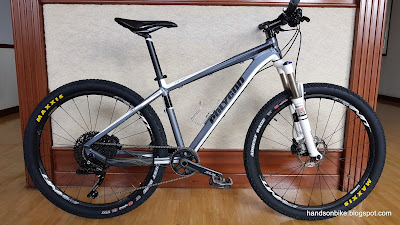 How does the new gear range compare with the previous setup? Let's take a look. 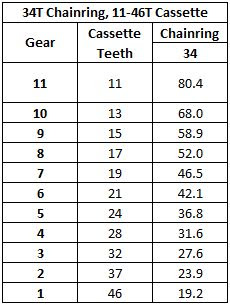 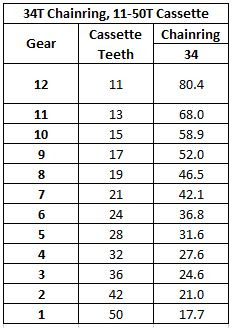 On this new 12 speed setup, there is a lower gear, courtesy of the large 50T sprocket. Other than that, the gear range and gear steps are similar to the previous 11 speed setup. In this case, the additional gear might not necessarily be better, as I give up the good performance of the Shimano 11 speed rear derailleur and shifter. In any case, it is worth trying out this 12 speed groupset which is not too expensive.