Continuing from the first part of the introduction to the Java Neo 2 folding bike, let's take a closer look at the folding method and design!

The most interesting feature of this new folding design is the way the rear triangle is folded. On other bikes with folding rear triangles, the pivot will be located behind or in front of the bottom bracket, such as on the Brompton, the Birdy, the Bike Friday or the Dahon Curl. This is done for practical purposes, as locating the pivot away from the bottom bracket is much easier for manufacturing and design.

However, if the rotation centre of the rear triangle is not the same as the centre of the bottom bracket, there will be a change in chain stay length during folding. This is a major limitation for all these folding bikes, where an additional chain tensioner or chain catcher is needed to prevent the chain from falling off the chain ring during folding or unfolding. At the same time, installing a front derailleur on these kind of bikes with a folding rear triangle is challenging due to the movement of the chain during folding.

This is not a new idea, but it is the first time that I saw it being implemented for a mass production bike. It is challenging to design the rear triangle pivot such that it rotates around the bottom bracket, as there is limited space and width at the bottom bracket area.

Another advantage of this folding bike is that practically all components on the bike are standard components, without the use of proprietary parts such as on the Brompton.

Instead of writing any more, let's look at the pictures of the new Java Neo 2!

Java Neo 2 with the special rear triangle that folds and pivots around the bottom bracket.

Once the lever is pressed, it will release the hook that holds the seat tube to the rear triangle.

A bit difficult to see clearly, but the hook catches a protrusion which is mounted on the seat tube. This is what prevents the rear triangle from detaching when you lift up the bike. Similar in concept to the Brompton.

This is the little aluminium protrusion that the rear triangle will catch on. Although it is not under load when you ride the bike, the aluminium piece looks quite small and weak, and might break off under the stress of repeated folding and unfolding. Luckily it is replaceable.

Another highlight of this folding bike is the latch for the main frame folding. Lever is nicely integrated into the frame without protruding outwards, plus a nice red dial that is the secondary safety catch to prevent accidental opening of the latch.

The latch works by holding the two halves of the frame together. As you can see, the shaft on the latch will press against the pin on the frame when the latch is closed. Safety catch at the right side works similarly to your mailbox lock.

Another view of the folding joint, and how the latch is integrated into the frame.

I found that the latch kept getting looser as I opened and closed it, and found that the bolt that adjusts the tightness of this latch is very loose. I had to add loctite to the threads as shown by the red arrows to prevent loosening. There was a split washer but it was not effective at all.

Similarly, I added loctite to the set screws to prevent self loosening and a chance for the hinge pins to fall out.

As for the handlepost, the folding mechanism is slightly different from what I have seen on Dahon or Tern, but the concept is the same. Shown here is the bolt that is used to adjust the tightness of the handlepost folding lever.

Folding the Java Neo 2 is actually not so easy. Although the folding mechanism is nicely designed, with a well designed swinging rear triangle and a folding main frame, the actual process of folding and unfolding the bike is quite awkward and cumbersome. I shall attempt to describe the folding process and steps below in words, as there is no way to take pictures during folding because both hands are needed from start to finish. Please try to visualize it for now, I am sure someone else will upload a video of it in the near future.

Folding the Java Neo 2:
1) Raise the seatpost so that it does not protrude from the bottom of the seat tube. Yes you need to raise it, not lower it.
2) Open the latch on the frame (with the open/close switch), and fold the hinge slightly.
3) Press the folding lever on the rear triangle, and lift up the frame so that the rear triangle swings downwards.
4) While the frame is lifted, use your foot to push the rear wheel inwards such that it swings under the frame. This is similar to folding the Brompton.
5) At the same time, you need to fold the front half of the frame, or the front wheel will block the rear wheel from tucking in under the frame. This is the difficult part, trying to fold the front and rear of the bike at the same time.
6) Once the rear wheel is tucked under the frame, the front wheel should also rest beside it. There is a hook beside the front fork (shown in the pictures below) which needs to hook onto the right side chain stay. This hook is difficult to engage as it tends to snag on the outer casing running on top of the right side chain stay.
7) At this point, the handlepost is still not folded, while the seat post is still high up in the air. You have to keep holding the bike or it will fall over!
8) Now, you can lower the seat post all the way down until it touches the ground. At this stage, the folded bike is balanced.
9) Finally, fold the handlepost and rest it beside the front wheel.
10) The bike is able to balance itself when fully folded, but not when half folded.

Unfolding the bike is comparatively easier, as you can use gravity to help you unfold the front fork and the rear swing arm at the same time, similar to the Brompton method.

I wondered why the stock seat post (diameter 33.9mm) is so long at 650mm, as other folding bike seatposts are usually around 560mm to 600mm maximum. Is it possible to change to a shorter seat post?

When the rear triangle is folded, the seat post needs to be raised higher, to prevent it from blocking the movement of the rear triangle. This is an additional step which is not found on other folding bikes.

When folded, the front fork and right side chain stay will be next to each other. The hook needs to be engaged to prevent the rear triangle from dropping down when you lift the folded bike. 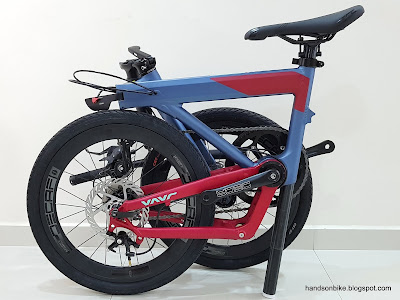 Java Neo 2 full folded! The reason for the long seat post is so that it can reach the ground and balance the bike. If a shorter seat post is used, the folded bike will fall over. 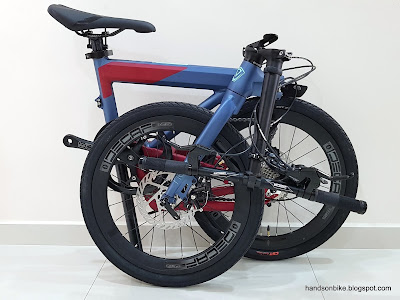 Handlepost folds outwards and rests on the side of the front wheel. A longer handlebar (stock width is 540mm) will result in a larger folded size.

Folded width is quite decent, but note that this is without pedals. In a separate post, this Java Neo 2 will be compared to the Dahon MuEX.

The rear brake cable and shifter cable runs between the seat tube and the rear triangle, on both sides. Note that sufficient cable slack is necessary to allow proper folding.


While studying the bike, I also checked the clearances so that in the future, if anyone wants to upgrade or change the components, here is a reference to see if it is possible or not.

Some clearance between chain and seat stay. Possible to use a larger chain ring or larger cassette.

Small clearance between chain and frame, need to take note if chain line is adjusted, such as if the crankset is changed.

When the rear derailleur is in the lowest gear, the cage goes quite close to the rim and tire. Probably cannot change to a long cage rear derailleur as the cage will touch the tire, unless you use a narrower tire.

Some of the features of this bike printed on the seat stay, although it doesn't mean anything to me. 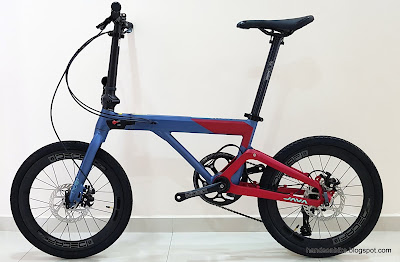 Full bike picture! The lines of the frame have an angular look with hardly any rounded corners. 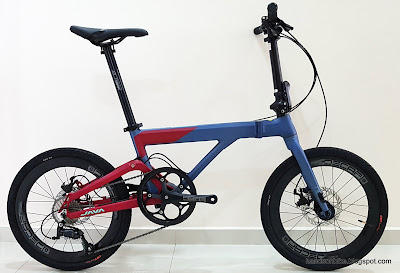 View from the drive side. The black components and high profile wheelset matches this frame quite nicely.

As for the other specifications such as chain stay length, it is not useful data on its own, as we need to compare it to another bike. This will be done in another post, where this Java Neo 2 will be compared in detail to the Dahon MuEX, which is used to represent a standard folding bike.