To continue from the introduction of the Early Rider Seeker 14 kids bike, here are some more details of the bike. Also, I will be converting it to a balance bike for now, to ease the transition from the balance bike to a pedal bike.
For a kid to try a pedal bike for the first time, it is a daunting task. Not only that, the bike will be different from their previous balance bike, so the learning curve is very steep. If they don't enjoy the process, they will tend to lose interest. So, I want to make it easier for my kid, by converting the Seeker 14 to a balance bike for now, to make it more similar to his previous Strider 12 Sport Balance Bike.

Before doing the conversion, let's take a closer look at the hub axles. It is a rather unique setup as the hubs are threaded internally, with bolts that fix the hubs onto the fork and frame. This is different from the usual quick release axle type (diameter 5 mm through hole on the hub) or the threaded hub axle type (bolted on with axle nuts on the outside of the frame). 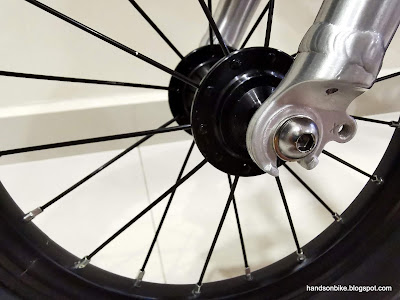 Bolts are used to secure the front hub to the fork. Otherwise, the fork has a standard dropout shape. 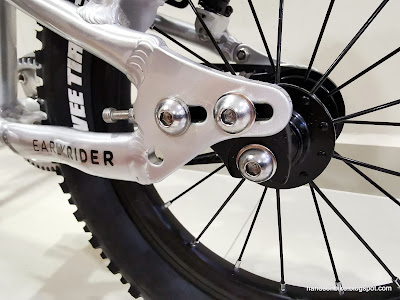 Rear hub is also secured to the dropout with bolts on both sides. The whole dropout can slide forward and backward to tension the belt. 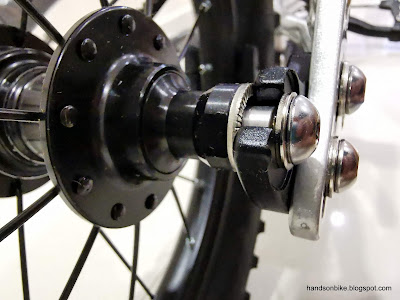 Bottom view of the rear dropout. The dropout is just a standard QR dropout, but the hub is special as it is threaded internally. 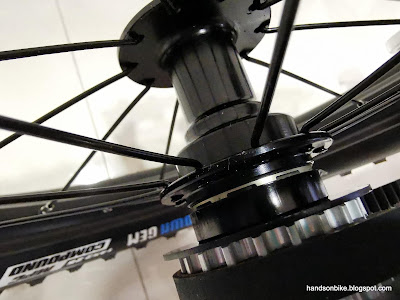 The rear belt sprocket is fixed onto the rear freehub body, on what seems to be the standard Shimano freehub splines. There is a black spacer for proper chain/belt line alignment with the front chain ring.
To convert the Seeker 14 to a balance bike, I need to remove the crankset, so that it does not get in the way when the kid pushes the bike along with his feet. This is also the reason why I did not install the pedals previously, as I already had the intention to convert it to a balance bike first. 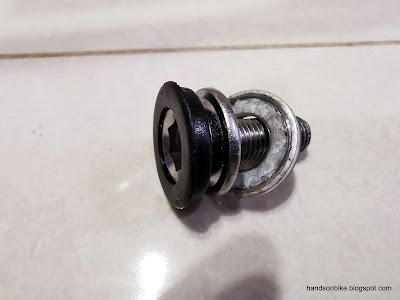 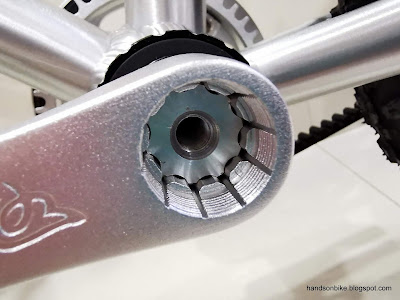 Crank arm bolt threads into the hole on the spindle. This looks to be an ISIS drive with 10 splines. 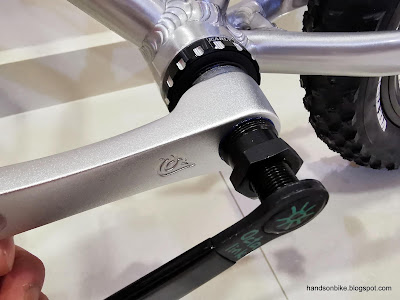 For this kind of crank and spindle, a crank puller is necessary to remove the crank arms. The Octalink tool will work for ISIS cranks as well. 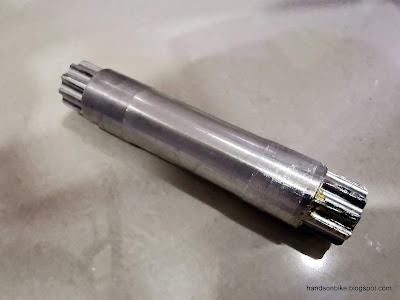 With both crank arms removed, the spindle is actually just a standalone part that is not fixed to either crankarms. First time I have seen this type of design, as one side is usually permanently fixed to the crank arm. 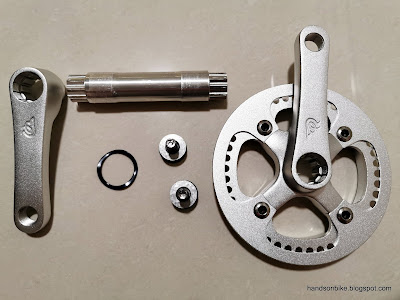 Parts of the crankset. Note the wave washer that goes onto the non-drive side, between the crank arm and the bottom bracket, to put pre-load on the bearings. 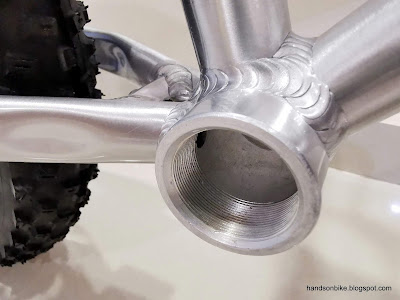 With the bottom bracket shell cleaned, it looks to be of the standard English threaded type. To be studied in more detail in the next blog post.
After removing the crankset successfully, the belt also needs to be removed from the frame. There is a split in the rear triangle, to allow the belt to be removed. Same concept as the Fabike C3, which has a split right side seat stay.
The frame does not really open up a lot, so it was difficult to remove the belt through the small opening. It takes a lot of careful but firm action to prevent damage to the frame or the belt. 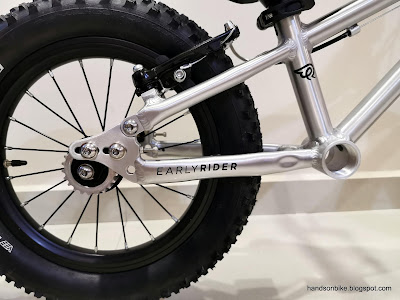 The belt has been removed from the frame! Note the bolt that connects the seat stay to the rear dropout area.
Next, I wanted to remove the rear belt sprocket as well, as it is not necessary as a balance bike. After removing the rear wheel, I found that I did not have the tools to remove the sprocket. Although there is a lock ring that accepts a standard lock ring tool, I was not able to hold the rear sprocket in order to loosen the lock ring.
Normally for a cassette, a chain whip is used to hold the cassette in place, so that the lock ring can be loosened. However, since this is a belt sprocket, a proper belt tool is needed to hold the sprocket. As the lock ring was really tight, I had no safe way to hold the sprocket while loosening the lock ring. Therefore, I decided to just leave the rear sprocket in place, since it only adds weight but does not affect the function as a balance bike. 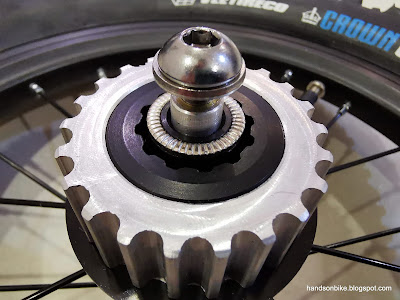 It has a standard lock ring, but a special tool is needed to hold the belt sprocket in place, if you want to loosen the lock ring. 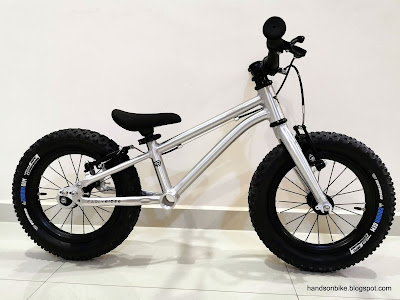 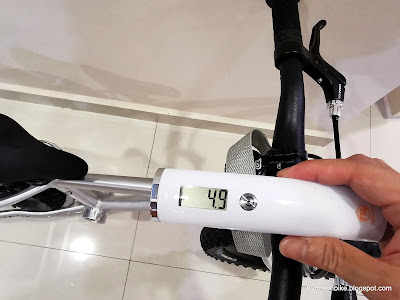 With the drivetrain removed, this balance bike is now just 4.9 kg. For comparison, the Strider 12 balance bike weighs just 2.9 kg.
Although this bike is heavier than the Strider by 2 kg, I think it is not such a big difference, as it can also help my kid get used to handling a heavier and bigger bike.
From my observation, he can still handle this 4.9 kg balance bike, although not as easily as the 2.9 kg Strider 12. I can't imagine how a 3-4 year old kid can handle an 8+ kg bike properly, it would be very tough indeed.
Lastly, on an unrelated note, I found that the stem installation on this bike was not correct. As shown below, the stem should clamp fully on the steerer tube, with no unsupported clamping area. 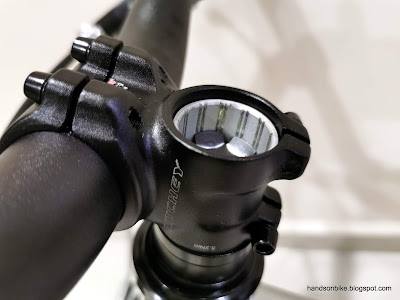 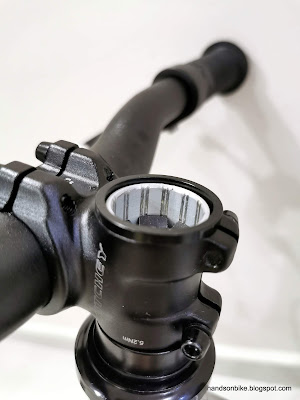 The proper way is to put a spacer above the stem, so that 100% of the stem clamping area is on the steerer tube.
The balance bike conversion is successful, and now we have a balance bike with full set of brakes and a larger geometry. The idea is to let my kid get used to riding this bike around as a balance bike, and learn how to brake with brake levers, instead of using the shoe on the ground.
Once he is used to the operation and feel of the bike, the drivetrain can go back on the bike, to make it a normal pedal bike.