Previously, I documented the change of the crankset to the Shimano 105 crankset, and how it greatly improved the stiffness of the cranks. Today I will write about upgrading from 8 speeds to 9 speeds, and things to look out for when upgrading to 9 speeds.

In order to upgrade components, I bought some stuff from Chainreactioncycles, and it was the first time I ordered from them. Delivery speed was not too bad, took only about 1 week plus to arrive. Ordered a pair of Kojak tires and also a SRAM 8 speed cassette, 12-23. Also added some bike tools to the order.

In the meantime I also changed the chain to a SRAM 9 speed chain with a Powerlink (PC-971). This was because the original chain actually rusted when I didn't ride for 2 weeks. Probably because it wasn't lubed properly, but I wanted to change to a shinier-looking chain anyway haha.

Wanted to get lighter and faster tires, which is why I got the Kojaks. Duranos should be even faster, but they are too narrow for my liking and require very high pressures (around 115 PSI) for optimum performance. 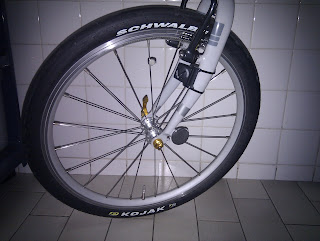 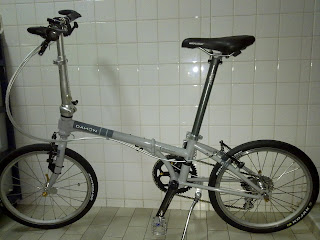 Bike with practically no accessories. Has a very clean look. 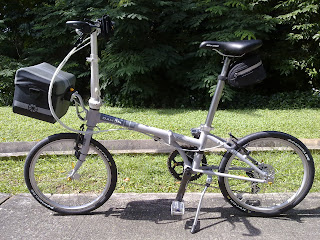 First ride with the Kojaks!

First thing I noticed was that the Kojak tires look really good on the bike, it fits the rims and frame very well. Tested the tires by going on a ride at West Coast park. First impressions: Comfortable enough for me, although it was slightly more bumpy compared to the Marathon Racers. Not a major issue there. The noise level is much lower compared to the Marathon Racers (MR), especially on the tarmac road. The MRs used to give a humming sound at higher speeds, but the Kojaks remain silent all the way. Very shiok.

Another thing that I found helpful was that the Kojaks, due to its slick surface, tend to collect much less dirt on the tires. On the other hand, the MRs will bring in dirt and grass and other things in the surface treads of the tires, dirtying the floor at home.

I also bought the 12-23 8 speed SRAM PG-850 cassette in order to mix and match the sprockets with the 11-28 one that I already had. At this point I had not yet decided to change to 9 speeds. I realised that I hardly ever used the 11T sprocket on the cassette, so decided to get a cassette with the 12T small sprocket, to improve and reduce the jump between gears. 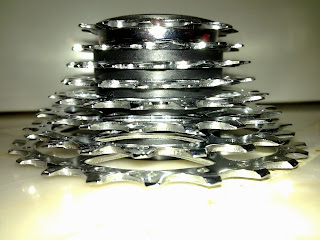 However, with the benefit of hindsight and more testing, it seems that the gearing is not fine enough for me. I can still feel a significant difference in gear ratio even with this finer gearing. This is due to the "missing" sprocket with 16T. Because of that there is a missing "sweet spot" between gears 4 to 5.

Because of this missing sweet spot, I decided to take the plunge and upgrade the whole drivetrain to 9 speeds. Read up a bit and realised that the difference between 8 and 9 speed cassettes is only the width of the spacers. The sprocket thickness is actually the same, as is the width of the whole cassette. Therefore we can actually mix and match 8 and 9 speed sprockets, with best results if the cassettes are from the same company.

In order to create the sweet spot, with an even finer gear ratio, while maintaining the gear range, the only way is to add more sprockets/speed, and this can be achieved by going to 9 speeds. For 9 speeds, we need 9 speed compatible wheels, cassette, chain, rear derailleur and shifter. I already have the wheels and chain. As for the rear derailleur, although it is said that the Neos derailleur can only support up to 8 speeds, I believed that it can probably do 9 speeds also, since the derailleur does not care if it is 8 or 9 speeds, it is the shifter that does the indexing of the gears. Therefore what I needed was the cassette and the shifter.

Decided to get the SRAM PG-970 12-23 9 speed cassette as it fulfills my requirements for a close gear spacing. It was also on sale, got it at S$50 as compared to S$100 now! Also ordered the 9 speed version of the SRAM Attack shifter because I have been pleased with the performance of the SRAM Attack 8 speed shifter. Not that I have much of a choice, since it is quite difficult to find 8 speed shifters by Shimano in Singapore. 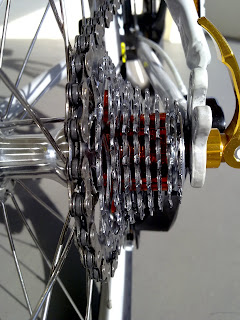 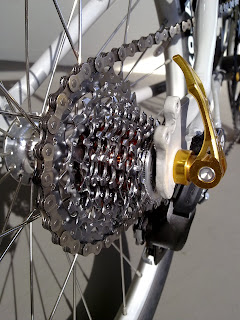 Multiple gears for the higher end, with small jumps in the number of teeth from 4th to 9th gear. Always a sweet spot! As for the larger jumps between gears 1~3, it is not an issue since they are seldom used, and for low gears the big jumps don't affect cadence so much anyway. With the new customised cassette, I can now cruise comfortably while maintaining my cadence.

On hindsight, I should have just changed to 9 speeds in the first place, instead of dabbling in 8 speeds. This would have saved effort, time and money. But without all these tinkering, I would not have learnt so much about the drivetrain. I learnt how to install and remove cassettes, take apart and customise cassettes, install shifters and derailleurs and many other details.

In the next issue of the Boardwalk Journey, I will document the changing of the derailleur to the Shimano Ultegra SS derailleur and the adding of some gold bling to the bike.
at February 24, 2011