However, there is an alternative way of folding! Check out the pictures below 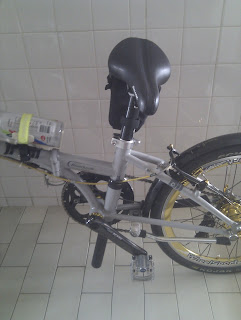 Step 1: Put down your seatpost, and turn your saddle as shown in the picture above. Seatpost should not be down all the way, or it might affect the later steps.

Step 2: Left crank should be rotated to approximately the angle shown in the picture above. Put up the kickstand. 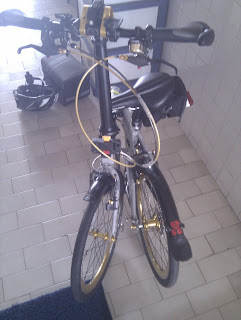 Step 3: Fold the frame in half, don't close the magnetic latch yet. Rest the bike on its 2 wheels and seatpost. 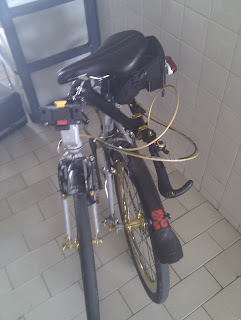 Step 4: Fold down the handlepost, so that it goes over your rear wheel. The handlebar will go under your saddle/saddle bag. This is the tricky part, where you might need to experiment a bit to fit everything nicely. If the handlebar is stuck, it may be because the seatpost was put too low, causing the saddle bag to block the handlebar. When done properly, the handlepost will rest nicely on the frame and the magnetic latch can be closed. 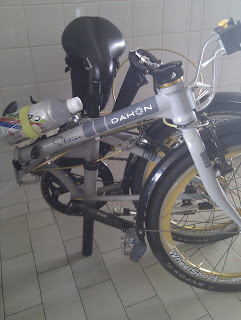 Note that the left pedal will be in front of your front wheel as shown above. 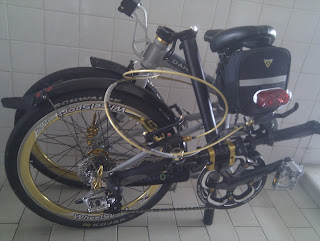 The right pedal will be below the handlebar. All the vulnerable parts of the bike (Eg. Rear derailleur, brake levers, chainring etc) are now on the same side of the folded bike.

In this configuration, the bike can still be laid on its side, such as in a car boot, or stored standing up, such as in a hatchback car. It can also be carried onto the MRT easily, without fiddling with the handlepost height or handlebar clamp. The advantage is that the height of the handlepost does not need to be readjusted everytime you fold and unfold the bike. You can also place more accessories on the handlebar without affecting the folding. However, the folding package is now wider as the handlepost/handlebar now sticks out on the side. 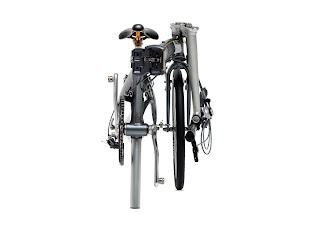 2010 MuSL, with the RD on one side and the handlebar on the other side when folded.

This is somewhat better than the outward folding handleposts (where the RD is on one side and the handlebar is on the other side), as the vulnerable parts are all on the same side, allowing you to carry/lay down the bike on the other side.

In my case, this allows me to fold my bike for transport without moving the gold stem clamp that connects the handlepost to the handlebar. Try the method!
at July 30, 2011