Preparing the bike for King of Da Hill !

This coming weekend, we will be conquering all the hills at the southern and western part of Singapore! Some of the hills include Mount Faber, Bukit Chandu, Kent Ridge Park etc. I have not been to any of these hills before, so it will be an interesting trip for me!

Can't say that I have been training much for this, nor can I say that I am well prepared. But no matter what, I'm just going to have fun! I have heard that it is very difficult to get up some of the hills on a 53T Front/28T Rear combo, with a 20" wheel bike. Not good news for me, because that is the exact same lowest gear ratio that I have!

Some of the KODH participants have a double chainring up front, which makes it much easier to cycle up the hills with the lower gear ratios. However, for those of us who only has a single chainring up front, there is a limit to how low the lowest gear can go, without affecting the top gear too much.

With my Dahon Boardwalk, I have 9 speeds, with a 53T chainring in front and the largest sprocket at the rear being 28T. To get a lower gear ratio, I will need to have a larger rear sprocket or a smaller front chainring.

Contemplated getting a front derailleur adaptor for the Boardwalk, so that I can fix a FD and add the 39T chainring up front, to give me a 2x9 gear system. However it is quite troublesome, since I will have to fix the adaptor, FD, front shifter, cable housing. Also, I can't see myself using the 39T chainring other than for KODH or for touring?

Another solution is to change the cassette to one with a larger sprocket, such as 32T. However, this is also not as straightforward as it seems. Because of the larger sprocket size, my short cage X9 RD will not be able to handle the 32T gear. Short of changing the RD, I also cannot use a different cassette.

Finally, I hit upon another solution, which is to change the current chainring size! From the current 53T chainring, I can change it to a 45T chainring, which lowers all my gear ratios by 15%. Although I lose the top end speed, I gain by having a lower gear ratio to use while climbing the hills. This is a temporary arrangement, all for the KODH challenge!

Brought out my new bike workstand from X-Tools which I bought about 2 weeks ago! Ordered it online at CRC, had it shipped over and it is still cheaper than buying locally, haha. It is of good quality too! 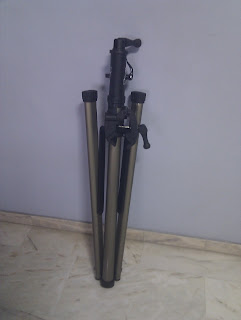 Being able to fold the workstand is very important, as I can put it in one corner and not have it take up space when not in use. 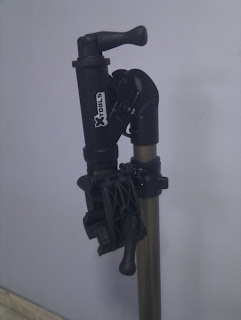 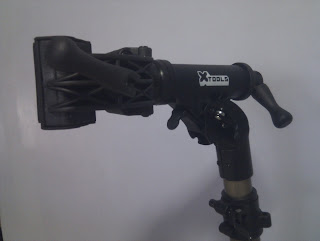 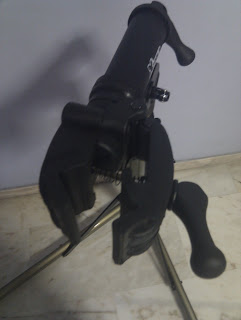 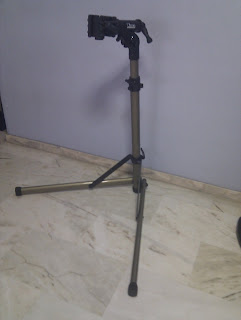 Ta-da! All set up and ready for use! It only takes 15 secs to set up the workstand!


Although the workstand has a rubber clamp area, I still prefer to use a separate old seatpost for clamping, instead of my black seatpost. With the workstand, it is now much much easier and comfortable to work on the bike, since the wheels and cranks can spin freely without the kickstand or the ground getting in the way. 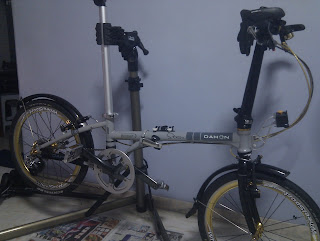 Note the different seatpost that I use. Very sturdy and stable workstand! 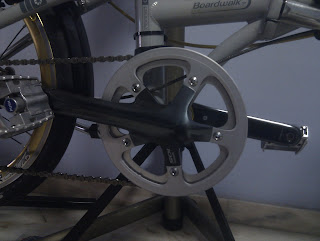 45T chainring with bash guard. Lowers my gear ratios by 15% compared to the 53T chainring.


An issue which I overlooked was the fact that the chain length would not be correct, since the chainring is now smaller. In fact, at the smallest sprocket at the back, the chain actually becomes loose! Luckily I could still adjust the B-tension screw on the RD to take up the slack on the chain. That was not the original design intention of the B-tension screw, but it works, and it is only temporary so it is fine. Shifting is not as crisp because the guide pulley is now further away from the sprockets, but again it is fine because it is only temporary.

Will be testing out the new system very soon, hope it works well and comes in useful for KODH!
at August 29, 2011