1 week after the NTU Bike Rally, comes the OCBC Cycle! This time, I took part in the 39km Challenge. Once again, with the experience gained from previous years, I managed to:

1) Get the correct sized jersey (L). A lot of people would have chosen a size that was too small for them!
2) Start in the middle of the pack (Group C) instead of at the back. This ensures a nice clear road with very few road hoggers.
3) Start on time as I made my way to the start point early, and waited for about 20mins. This avoids the jam that occurs much closer to the flag off time.

Prior to the race, the jerseys and the number tags were prepared! 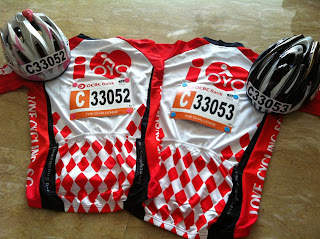 Number shown in all 4 directions, front, rear, left and right

With the light drizzle that took place in the dawn hours, which thankfully cleared up by 5+ am, the cool weather made it really pleasurable to ride!

The flag off was done in waves, and it was good to see that the wave I was in was not too crowded, everyone could cycle slowly out from the start point without getting jammed up.

First slope, Bayfront Ave bridge! Everyone charged up the gentle slopes, and zoomed down the other end, through the underpass near Marina Bay. Since this was a closed road event unlike the NTU Bike Rally, we could all push hard without worrying about traffic lights.

After the underpass, we went through the roads beside the construction sites at the Marina South area. It was quite dangerous at this point as there were many wet metal plates on the ground, but good to see that everyone had the sense to slow down and also signal for those at the back to watch out. I think a big reason that we went through safely is that I'm cycling near the front, with the more experienced riders.

The major slope of this ride, the Benjamin Sheares bridge! If you have driven on this bridge before, you will know that this is a really tall bridge, with steep slopes up and down the bridge. Now try cycling on it! My strategy is to push hard up the slopes, and rest while cruising down the slopes. This is suitable because my top gearing is too low to cycle down the slopes anyway. The slopes are where you can pull away and gain a lot of time.

And this is where you can see the difference between those who think they can ride, and those who can really ride! You see some people just blast up the slope like it is flat ground, quite an awesome sight I must say. Personally, I loved the slopes! I must thank the King of Da Hill rides, NTU night rides and Jurong Hill rides for the training. Simi si slopes? Haha!

The down slope was really long and fast. And because there are no traffic lights, you just let the momentum carry you along the straight! Went over 50km/h on the down slopes without even pedaling, still manageable when I hold the drops. In case you don't know, holding the drops on a downhill makes your bike more stable than on the hoods as it lowers your centre of gravity and gives you a better grip on the handlebar. Of course, less air resistance too!

Unfortunately I don't have pictures of the ride itself, hopefully my description is good enough for you to picture the scenario in your head. Or even better, join the ride!

One side of the ECP stretch (Westbound) between Rochor and Tanah Merah was entirely closed for the OCBC ride. This is super duper shiok as the roads are nicely paved, very wide, and just plain straight and flat. Excellent route for maintaining a high cruising speed! See the Endomondo route below to see what I mean.

Steady speed of 29km/h maintained throughout the ECP stretch. Click here to see the route on Endomondo

You can see that from 7km till 20km, it was straight and flat all the way! I maintained my speed at a very steady 29km/h, not too taxing, but still working out! A very good speed to maintain on my Dahon Boardwalk X20-R. I really enjoyed the morning breeze, the morning sun and the fresh air.

One shiok part is overtaking a lot a lot of road bikes! Especially those from Groups A and B, who started out before me. Of course, there are also some from Group D who zoomed past, very fast! It is easy to maintain 29km/h on a road bike, not so easy on a folding bike! Hardly saw any folding bikes travelling at our speed, except for 1 fast MuSL who kept pace with me all the way, and also 3 Bromptons (ridden by Steven of Diginexx, Derek and another person). We were all riding at about the same pace, sometimes overtaking each other but always within sight. This is very impressive, especially for the Bromptons which has a maximum of 6 speeds! And Derek was riding his 2-speed S2R, great work powering up the slopes and also cruising down the slopes. Great advertisement for folding bikes! Who says folding bikes can't go fast?

Just before the U-turn point, there was a crash! I did not see the crash, but there was a lot of commotion up front and we all slowed down to go past. Thankfully the medic was already there tending to the injured cyclists. Later on, the ambulance would zoom down to the scene.

Initially, the route published showed that there was something of a loop near the end, but as we pedaled around the U-turn point, it was already 20km, unlikely to require any extra loop to clock 39km! So we made the U-turn, and continued along the ECP service road. This is also a point where we start to see some of the Super Challenge (59km) riders, who are completing their second loop, well done!

Along the way, we saw Denny from Joyriders zooming past us with his group, which has the same effect as standing beside the track as a train rumbles pass! At the point I felt like I was standing still, although I was actually travelling at 30km/h. Very impressive, especially since they started from the back and had to work their way through the crowd.

The ECP service road wasn't as wide as the expressway, of course, but since the entire road (both lanes) were closed, it was still wide enough to overtake easily. The only downside is that there are quite a lot of speed limiting strips, humps and sharp corners, which tends to exhaust you quickly.

After we reached Fort Road, it was back to the ECP! This time, up Benjamin Sheares bridge in the other direction! Once again, I loved the slopes, thanks to all the slopes training and also last week's 128km "training" ride. It was tough but also very rewarding! Also, it is easy to see that folding bikes really climb much better than road bikes.

Then came a steep downslope at the Rochor road exit, which was a fast downhill with curves. I was lucky that there was hardly anyone in front of me, and everyone kept to their line nicely without cutting all over the place. Top speed was 52km/h, even with light braking! From there, we went past the roundabout at Suntec City, and out in front of the carpark at the Flyer. From there, it was a sprint to the finish line! Maybe I should have started pushing harder earlier, as I felt that I still had lots of energy when I finished, haha.

Think the timing is something like 1 hr, 25 mins for 38km. The target was 1.5 hrs for 39km, so the target has been achieved! Average speed is almost 27km/h for 38km, don't think I can achieve that average speed anywhere else in Singapore. I am so proud of my Dahon Boardwalk, no problems with the bike at all, rode extremely well, well worth all the modifications! 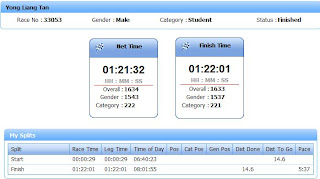 Overall, I felt that this year's route is much better, with no bottlenecks. Probably some slow areas, like near the start with the slippery metal plates and the U-turn at the halfway, but no stopping was necessary. Was on my saddle for the whole route, no mechanical problems at all, and also didn't need to stop at the waterpoints. The marshalling was also quite good, with ample directions at turns and obstacles along the route. 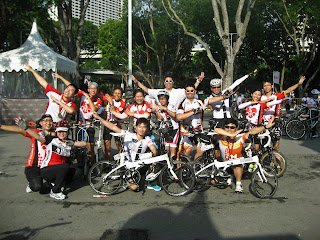 It was a really good ride, although the entry fee was quite expensive. There was practically no goodies in the goodie bags, what I got was only a bag, a jersey and a finisher medal. I guess, the price that you pay is mostly goes to the jersey and also the road closure, which is surely very costly. Barring any other event, it is likely I would join again next year for the once-a-year experience!
at March 04, 2012