While doing some upgrades for the Avanti Inc 3, I realised that the bike is quite different from any other bike that I have previously tinkered with. The most special part of this Avanti bike is no doubt the belt drive system.

A belt drive system is somewhat like a single speed bike, whereby there is no rear derailleur or front derailleur. To get more speeds on a belt drive bike, the only way is to use an internal hub. Some possible hubs that can be used would be the SRAM Automatix 2 speed hub, Sturmey Archer or Shimano 3 speed hubs, Shimano Nexus 5/7/8 speeds hubs, Shimano Alfine 8/11 speed hubs and the Rohloff 14 speed internal hub. These are some of the most commonly used internal hubs.

However, unlike a chain, the Gates belt drive system for bikes cannot use a chain/belt tensioner to apply tension on the belt. This means that the belt tension has to be adjusted by changing the distance between the bottom bracket and the rear axle.

The more common method would be to use horizontal dropouts, such as on most single speed bikes. A horizontal dropout would allow a pretty generous range of adjustment, and is probably the cheapest way of adjusting belt or chain tension. However, the downside is that once the wheel is removed, it is difficult to set it back to the correct belt tension, which is bad because belts are sensitive to belt tension. Brakes will also need to be adjusted if the wheel position is shifted, to ensure that the brake pads are still touching the rims properly.

To avoid these problems, well designed belt drive bikes use an eccentric bottom bracket for belt tensioning. An eccentric BB is basically an adaptor that goes in the frame, and the actual bottom bracket is then fixed onto this eccentric BB. As the BB is not centralised in the eccentric BB, the rear-axle-to-BB distance (or chainstay length) can be adjusted by rotating the eccentric BB in the frame. This allows the rear dropout to be of the vertical type, which ensures that the rear wheel always sits in the same position in the frame. Not only does this ensure that the brake pad alignment with respect to the rims / rotor does not change, it also makes rear wheel removal and installation much easier as there is no need to adjust belt tension repeatedly. 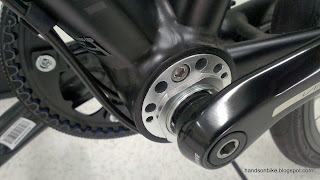 Default eccentric BB position. The BB centre is almost at the lowest position, which means that there is an equal range of adjustment forward (increase tension) or backward (decrease tension).

The belt tension that was the stock bike seemed about right. To actually measure and adjust the belt tension accurately, Gates recommend using one of their belt tensioning devices or iPhone apps. I have read that these devices are not really accurate, unless you get the high end devices which are really expensive. In the end I gauged the belt tension just based on my gut feeling, which is totally unscientific!

Anyway, after reinstalling the rear wheel, having changed out the tires to Schwalbe Marathon Supremes, the belt tension seemed to be lower. No idea why, as the BB position has not been adjusted. The bike was still creaking, and I have already ruled out the crankset, the BB and the pedals. 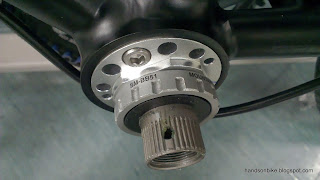 Eccentric BB with bolt for loosening or tightening it onto the frame. 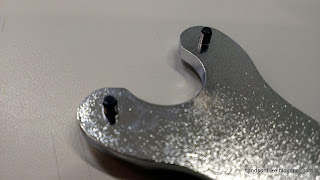 Pin spanner. Distance between pins are such that it does not fit into any 2 holes on the eccentric BB.

I tried using the Hollowtech BB tool to rotate the eccentric BB, by using the tool around the installed BB cups. However, I only succeeded in loosening or tightening the BB, the eccentric BB itself did not move at all.

Lastly, I tried knocking the bolt itself, as it might dislodge the wedge inside and allow the eccentric BB to move. It actually worked! By hammering the bolt (gently), the wedge will be pushed to the other side, and this actually frees up the eccentric BB. If only this was provided in a manual (if it ever came with a manual!).

Upon loosening the eccentric BB, I thought that it would be a good idea to remove the entire eccentric BB, and then apply some grease to prevent creaking. 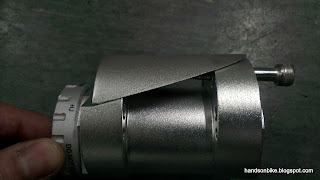 Once again, pardon me for the lack of pictures as my hands were greasy most of the time. After I greased everything, I reinstalled everything, including the crankset, and went for a test ride.

The retaining ring was really difficult to remove and install, as it was the flat type specially made for Gates belt drive sprockets. I greased all the contact surfaces between the sprocket and the splines on the rear hub, and reinstalled everything. By this time I think you can see how many times I have installed and removed the rear wheel and the crankset.

At this point, I had already greased every conceivable part that could make noise, from the BB, crankset to the rear sprocket. However, the creaking sound was still there. It came from the rear hub area, and seemed to be from the internal hub itself.

As a last resort, I decided to adjust the belt tension to see if it makes a difference. Once again, this means removing the left crankarm, knocking the bolt on the eccentric BB, and adjusting the belt tension again. Finally, I found the cause for all the creaking!

The final belt tension was quite a bit lower than I thought, but you don't feel any lag or stretch while riding. The belt also does not skip even when pedaling hard, so I guess the belt tension is sufficient.

All of that trouble, all because of the annoying creaking sound. As I have said at the beginning of this post, this Avanti belt drive bike is not a normal bike at all. It tends to be rather sensitive, especially for the belt drive system. A certain amount of hands on work and tinkering is required to get it running smoothly and silently. Although it takes quite a bit of work, the final result is really good!

The bike is now running so smoothly and quietly, and is a real joy to ride. Schwalbe Marathon Supremes are smooth and comfortable, although it can feel a bit narrow on certain patches of rough roads.

As for the gearing, I find myself using only Gears 1 to 8 so far. Have not had the chance to use gears 9,10 and 11, as they are too high for normal usage. Perhaps in the future I will lower the entire gear range, so that gears 9,10 and 11 can get used, and reserve the lower gears for climbing.
at November 05, 2013