Here is the second post about my new road bike, the Merida Scultura 5000! In the previous post about the bike I wrote about the first impressions that I got from the bike. After spending more time with the bike, I have started to look more in-depth into every part of the bike and found more interesting highlights.

Under the left chainstay there are actually 2 screw bosses that are currently covered with 2 bolts. These screw bosses are actually meant for mounting the Shimano Di2 battery, if you want to convert the bike to an electronic shifting setup. You can see how the Di2 battery mount is fixed to the frame using 2 M4 bolts at this post here. 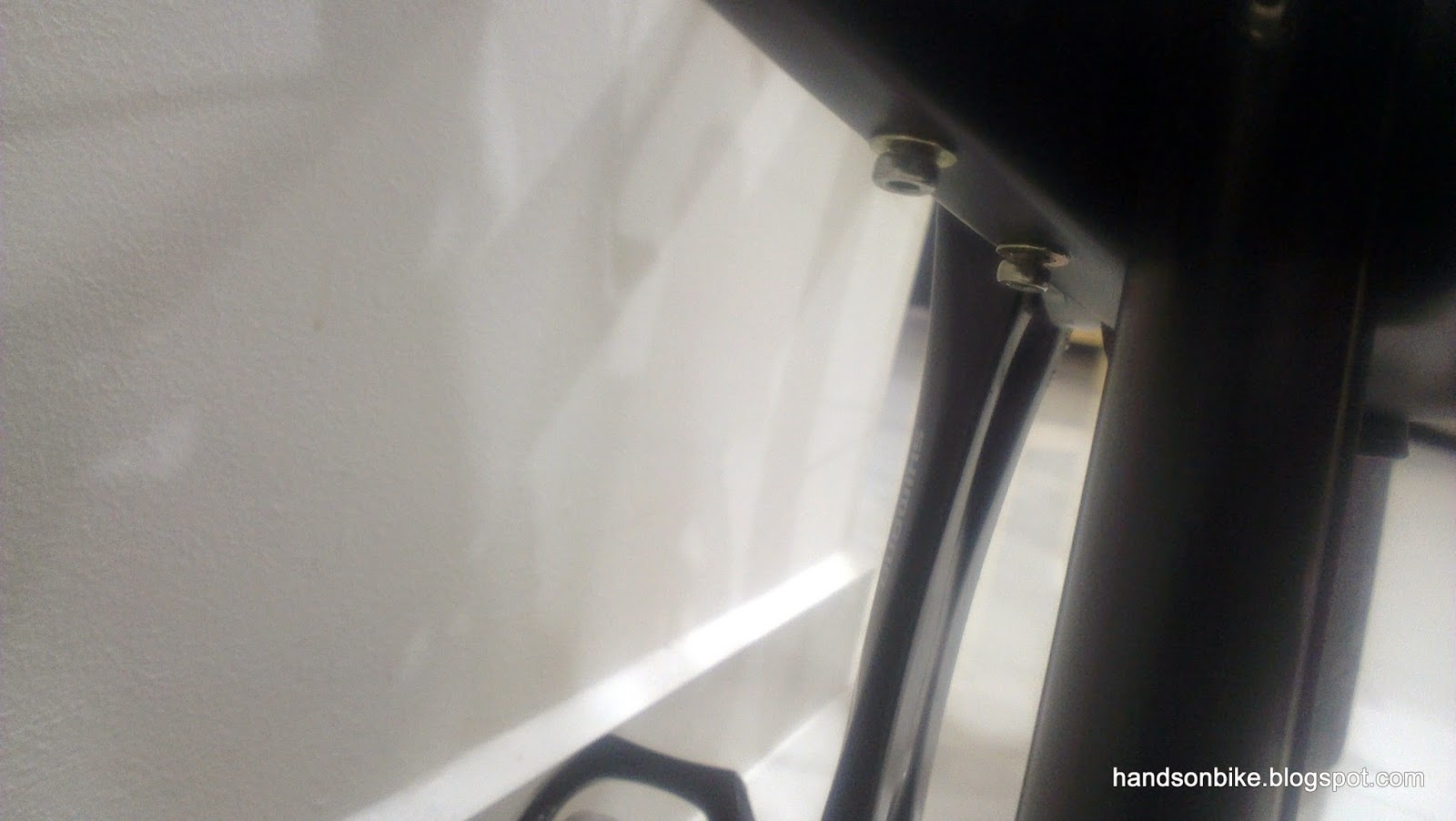 The 2 M4 bolts located under the left chainstay, near the BB area. This is for the Di2 battery mount.

As a full carbon frame, the dropouts are also fully carbon to save weight, as compared to using aluminium insert dropouts on the frame and fork. 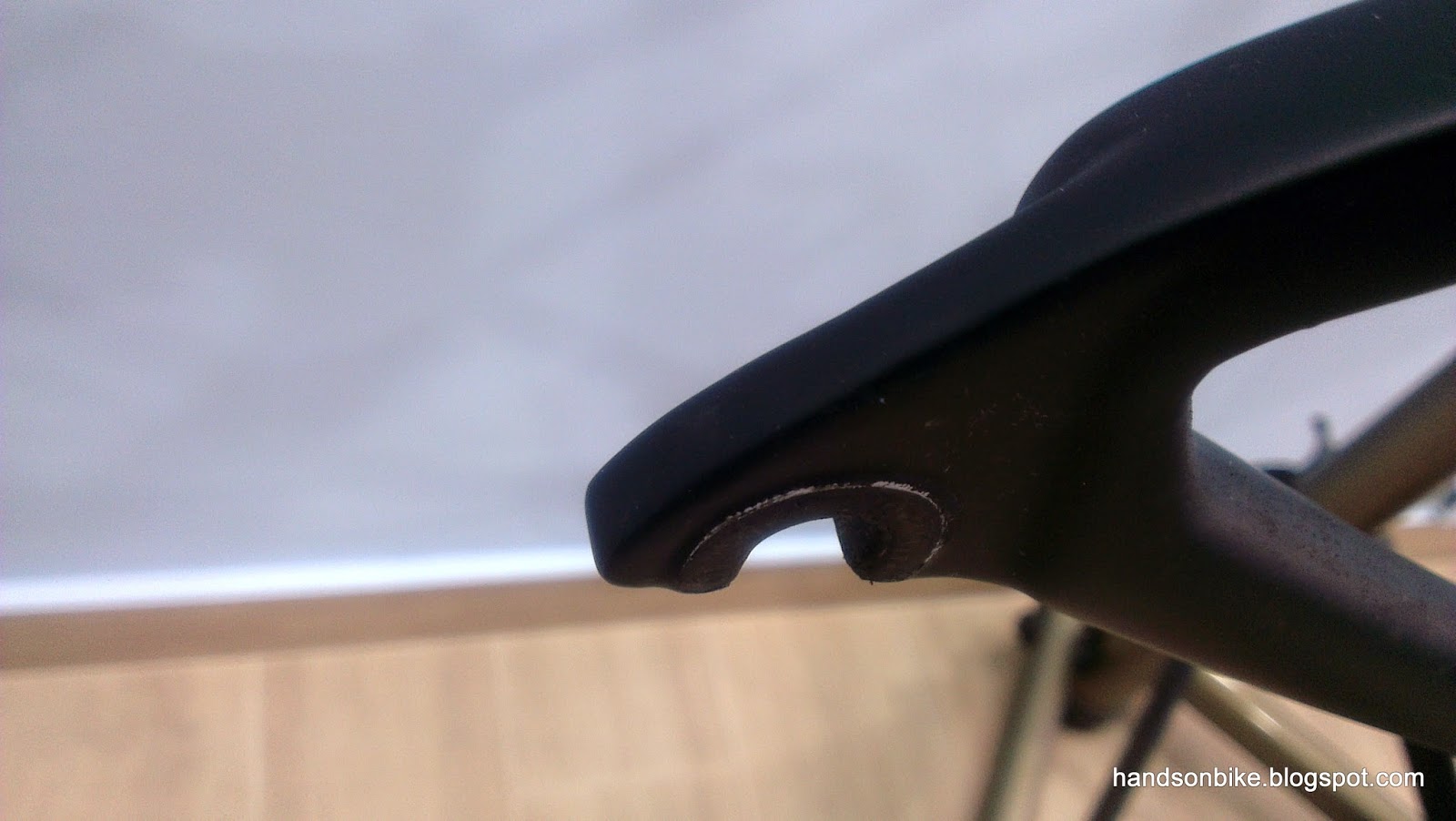 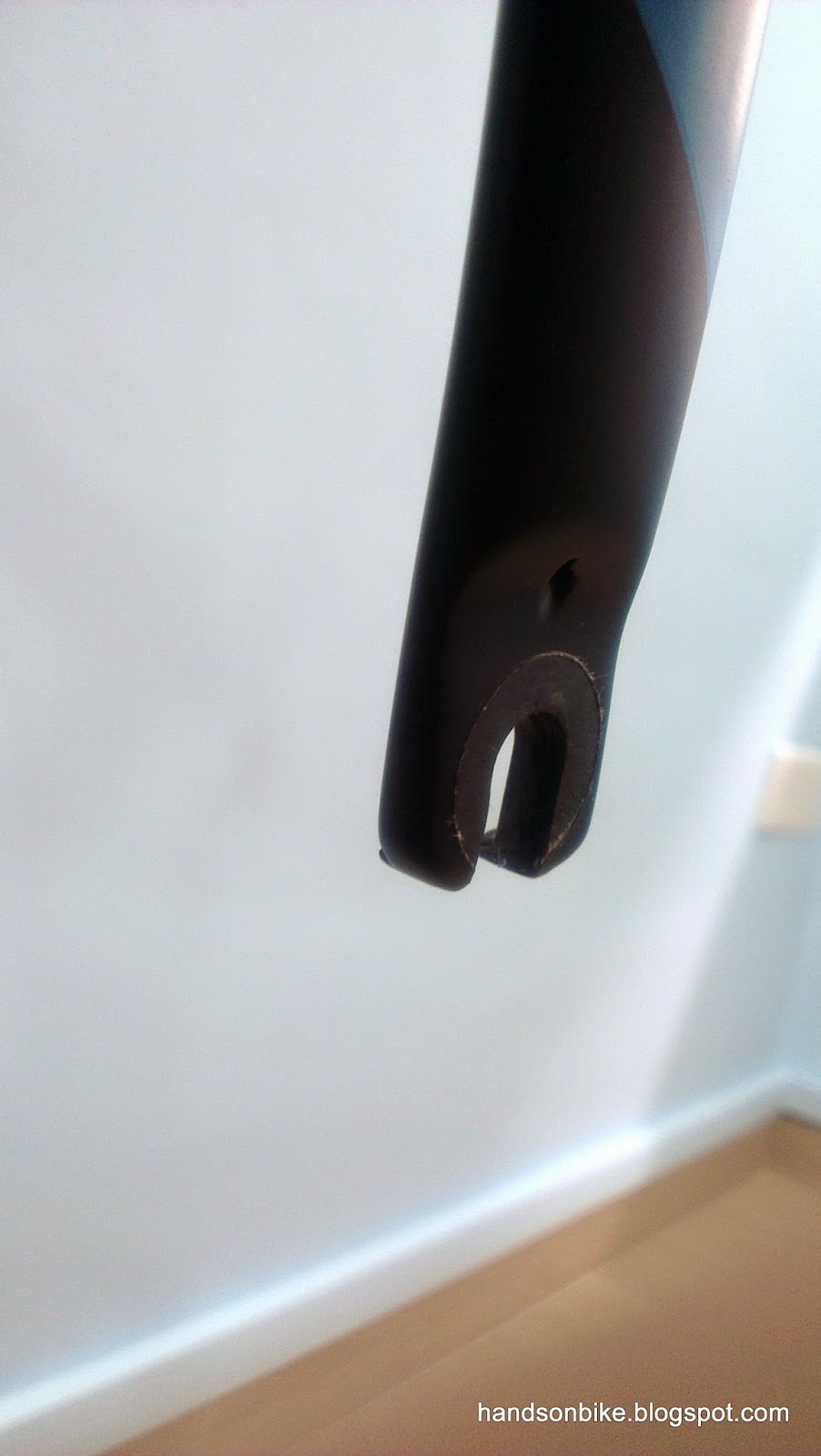 While cleaning the bike, I also took the chance to get a closer look at the rear hub and cassette. Since the wheels are already off the bike I might as well clean the cassette too. 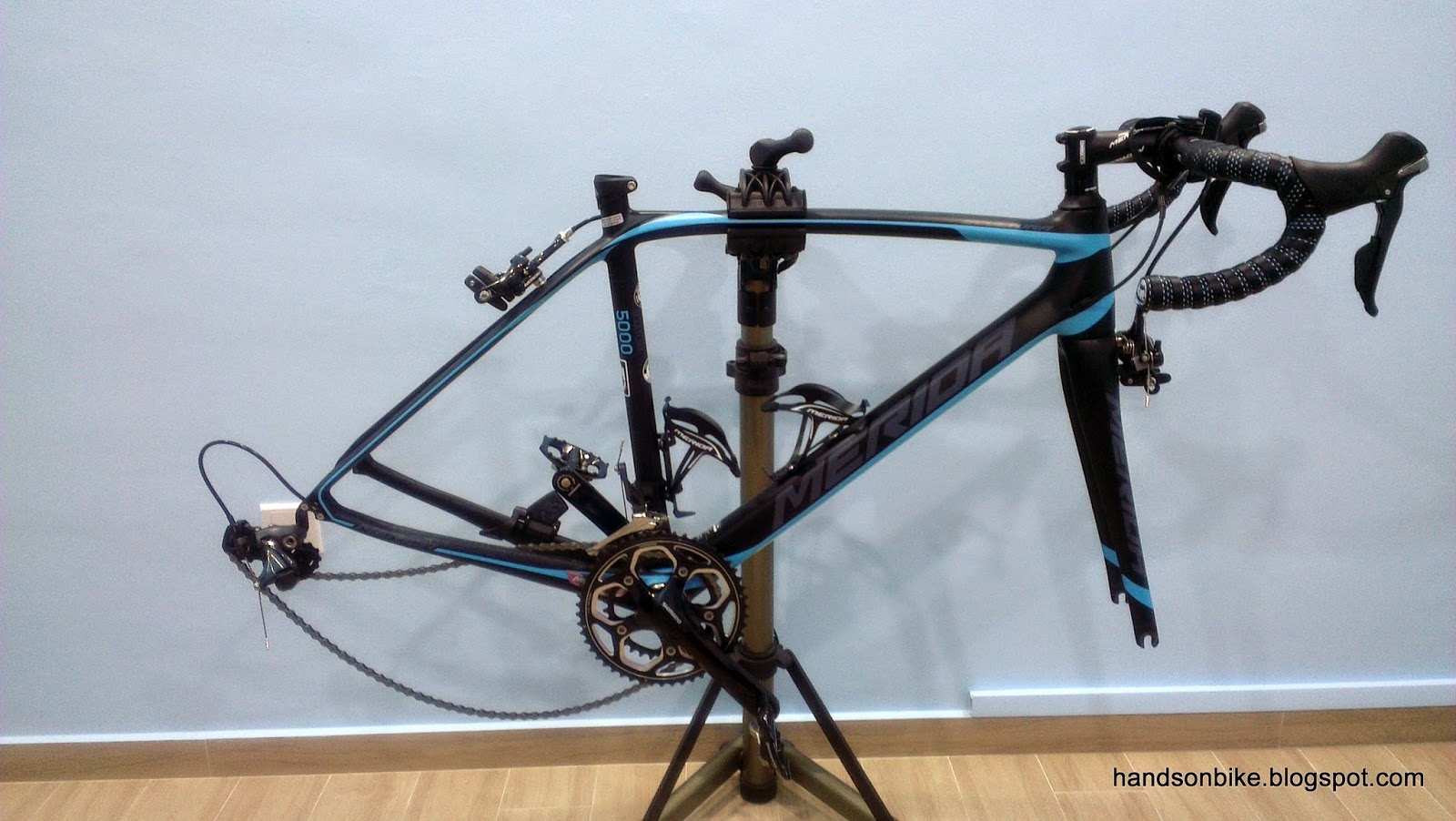 The bike with both wheels removed for some post-rain maintenance. 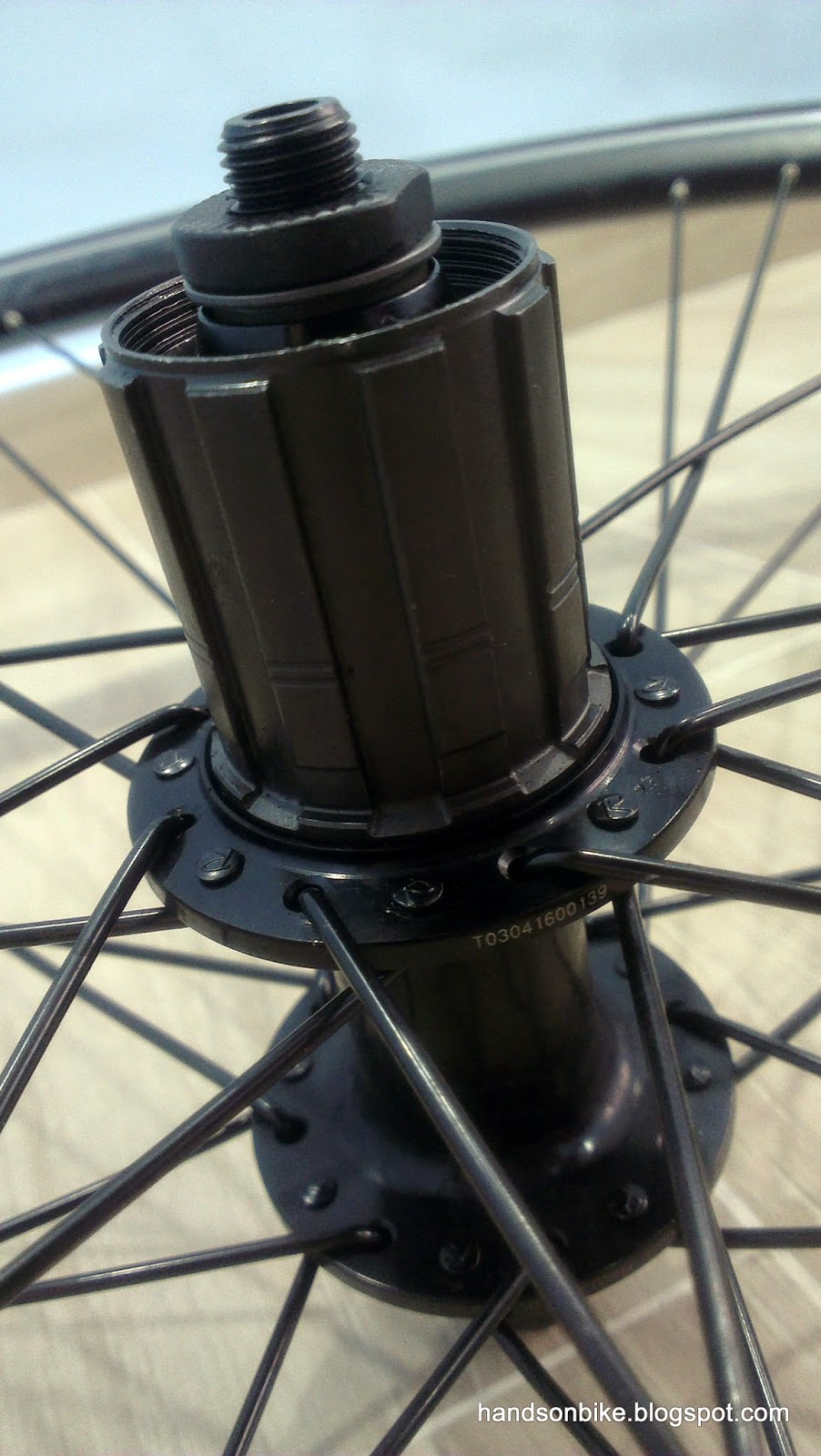 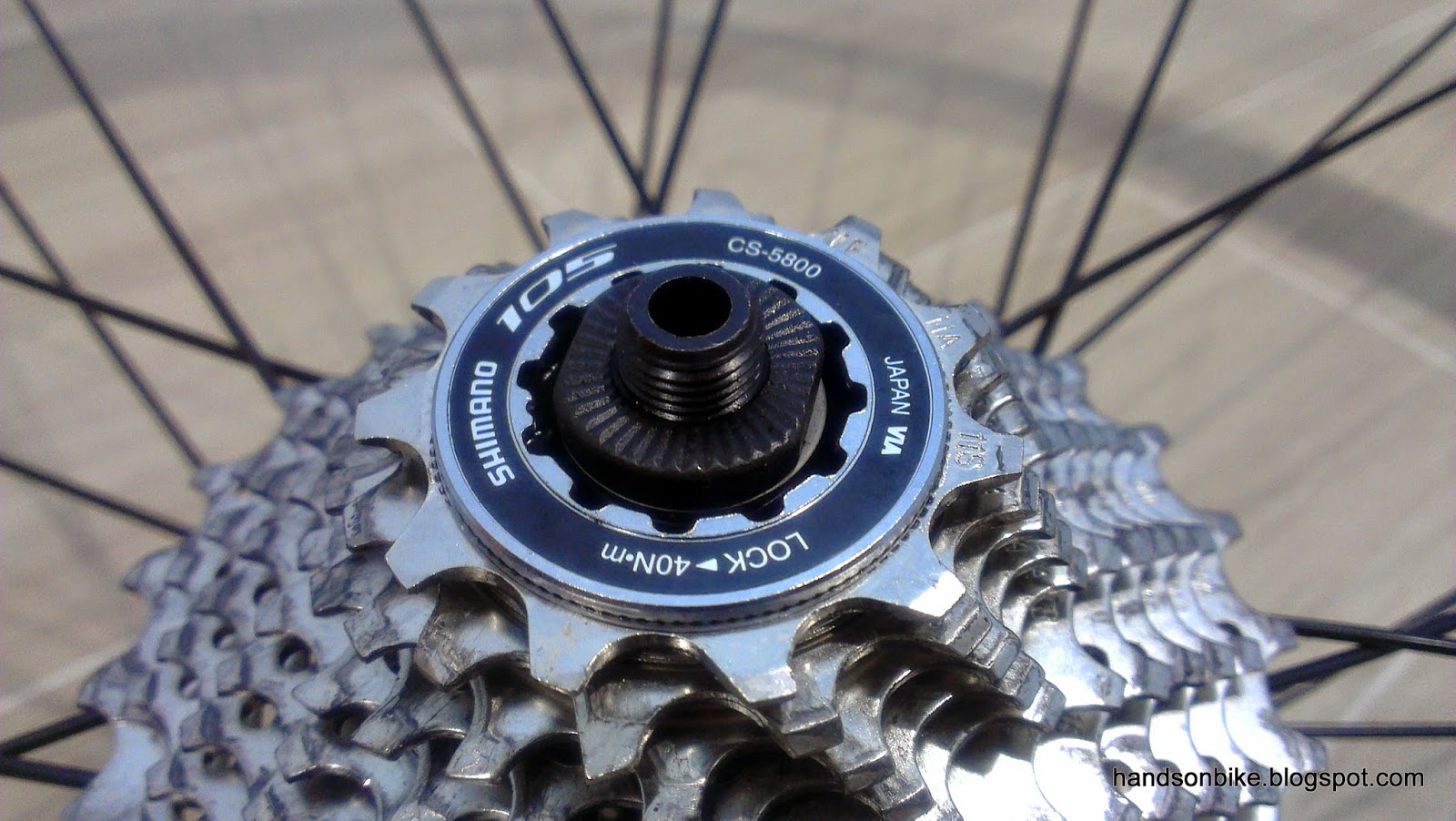 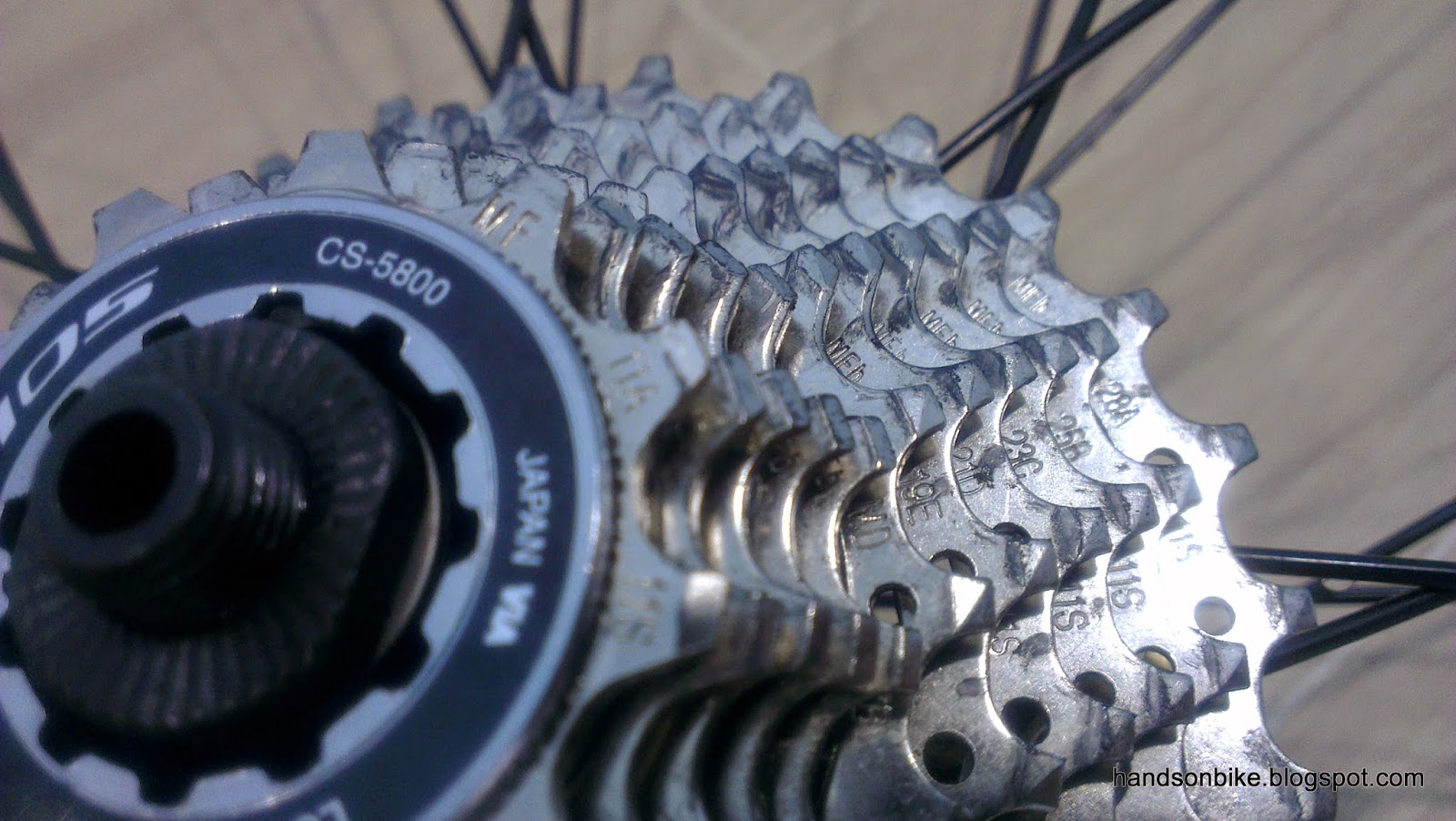 Closer look at the cassette sprockets and the number of teeth on each gear sprocket. 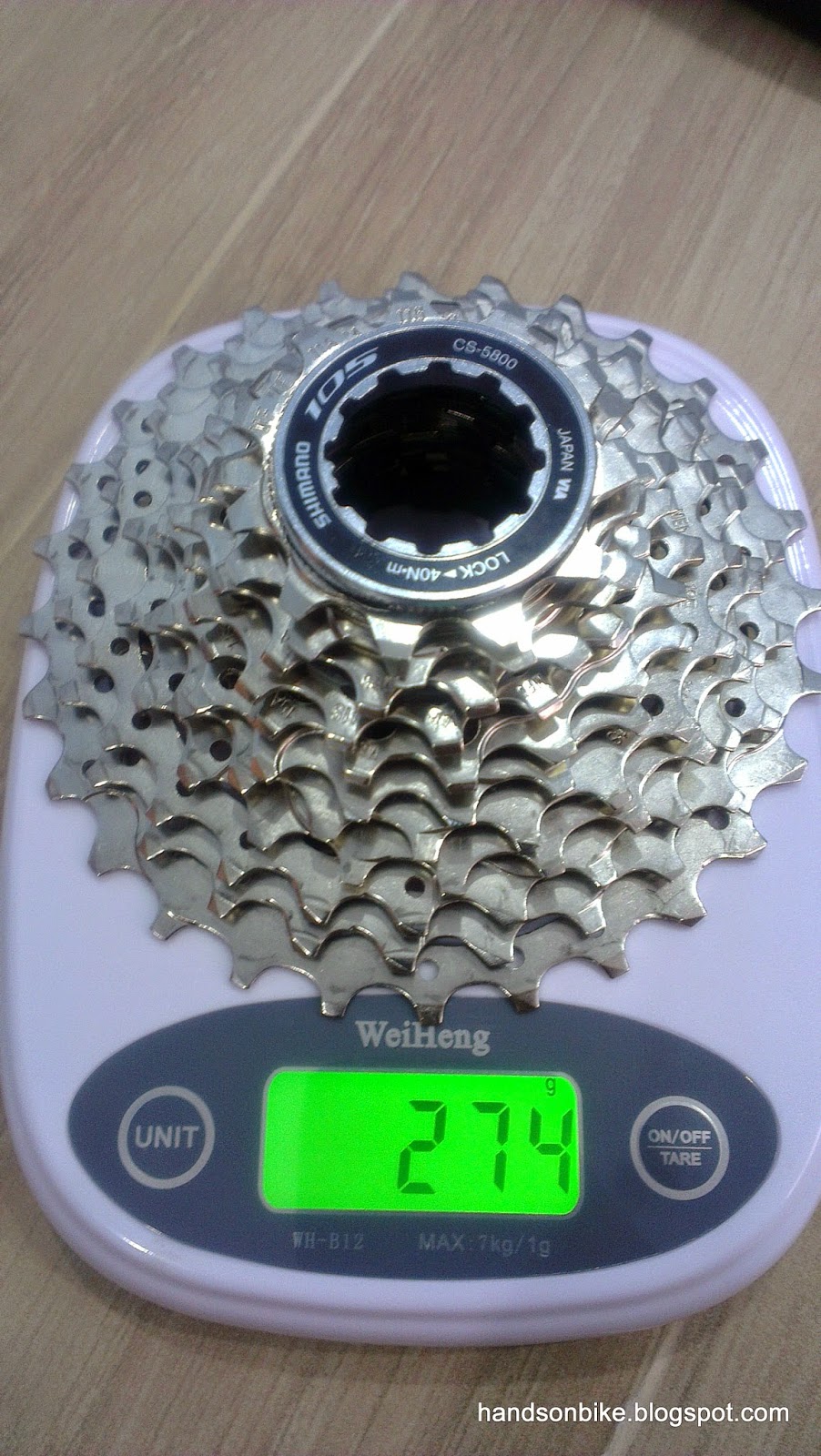 Next, let's move on to get a closer look at the seatpost. The stock seatpost is actually a nice carbon seatpost that looks pretty expensive. How heavy does it weigh? Let's find out. 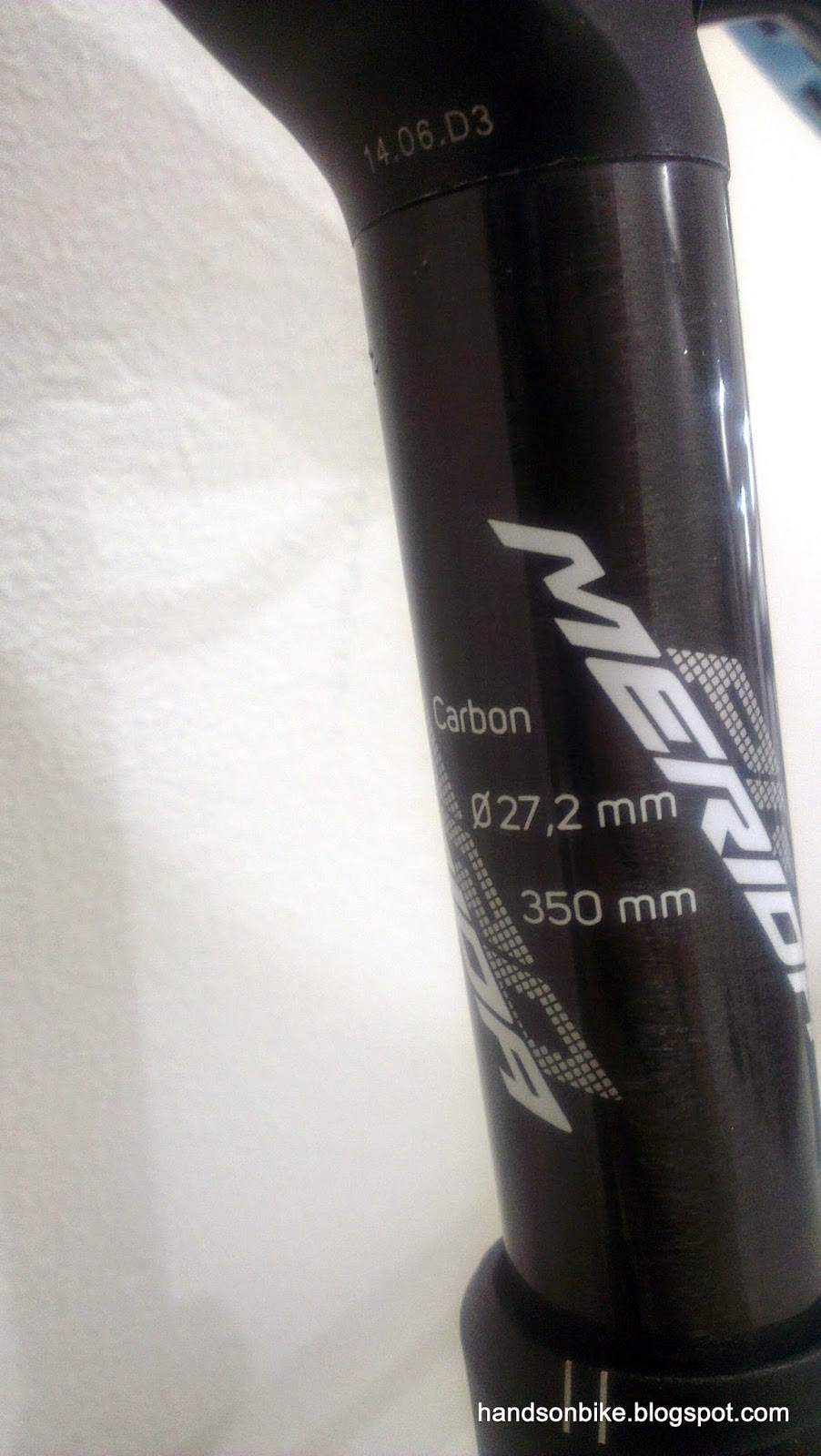 Small diameter of 27.2mm allows some flex that improves comfort. 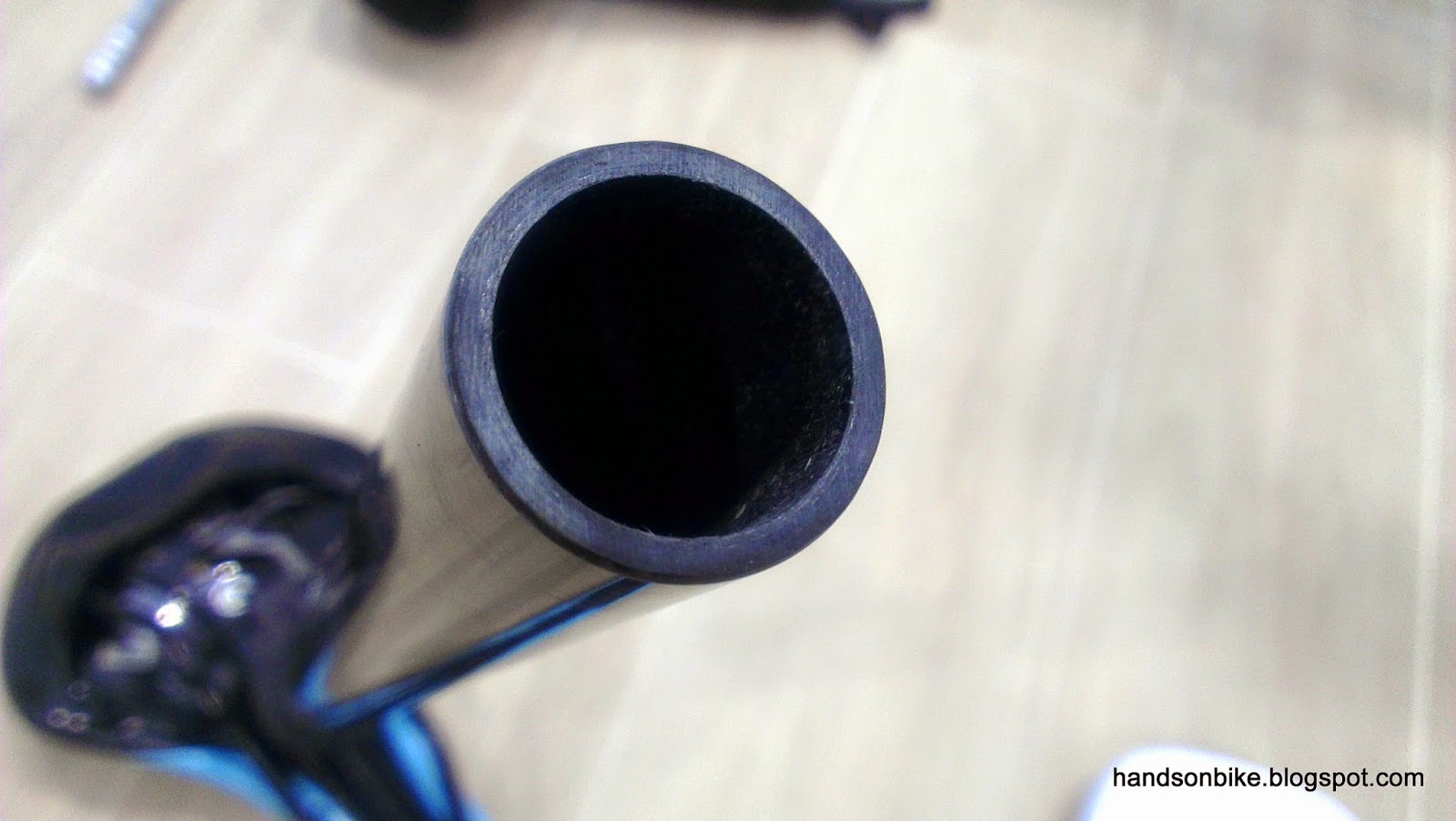 Seatpost carbon tube with wall thickness that looks quite strong 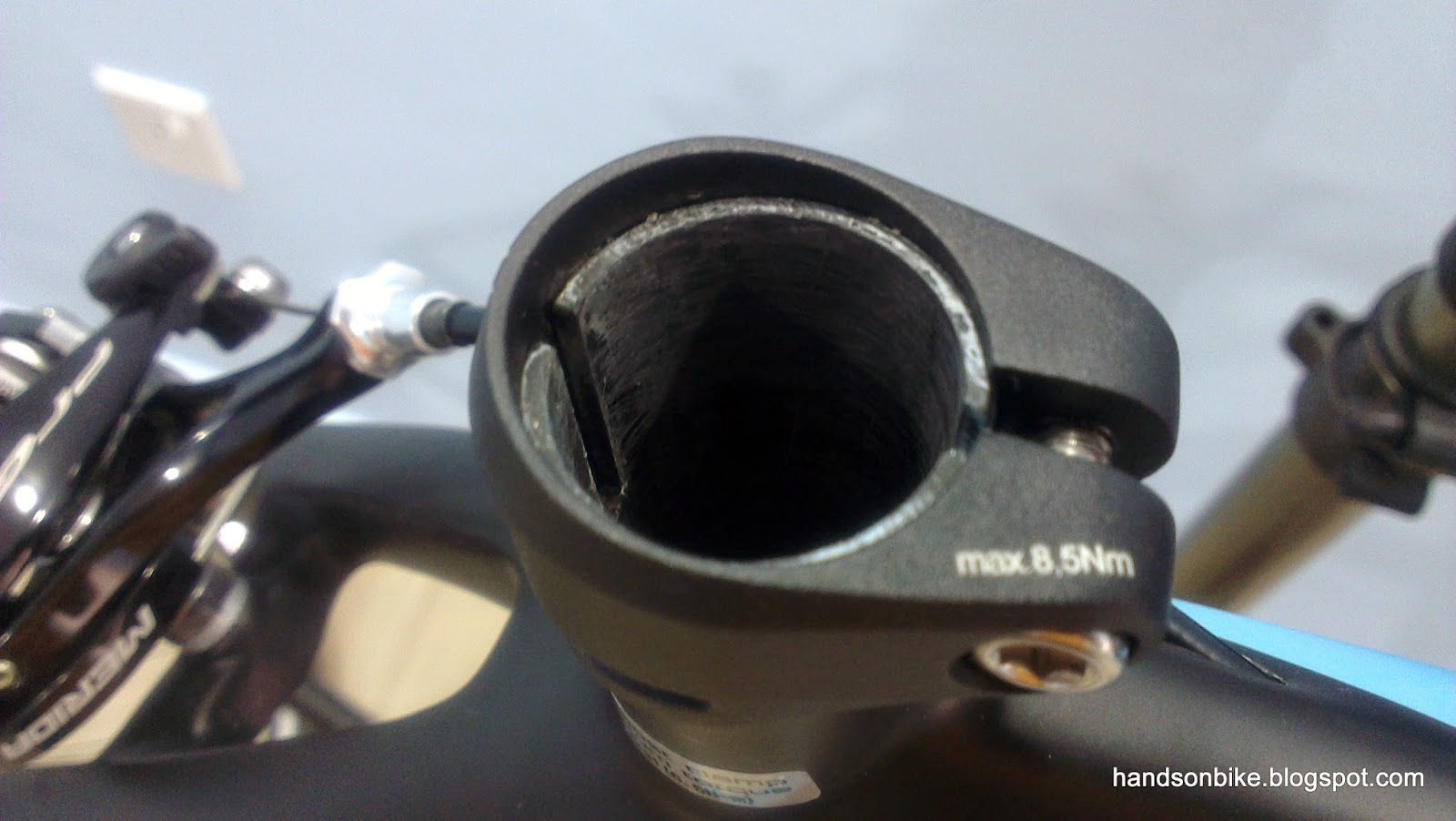 After pulling out the seat post, I realised that the seat post is actually very long! There is a minimum insert length of about 10cm. Even if I cut off 10cm from the seatpost, I still have sufficient length to get another 10cm of insert at my saddle height. 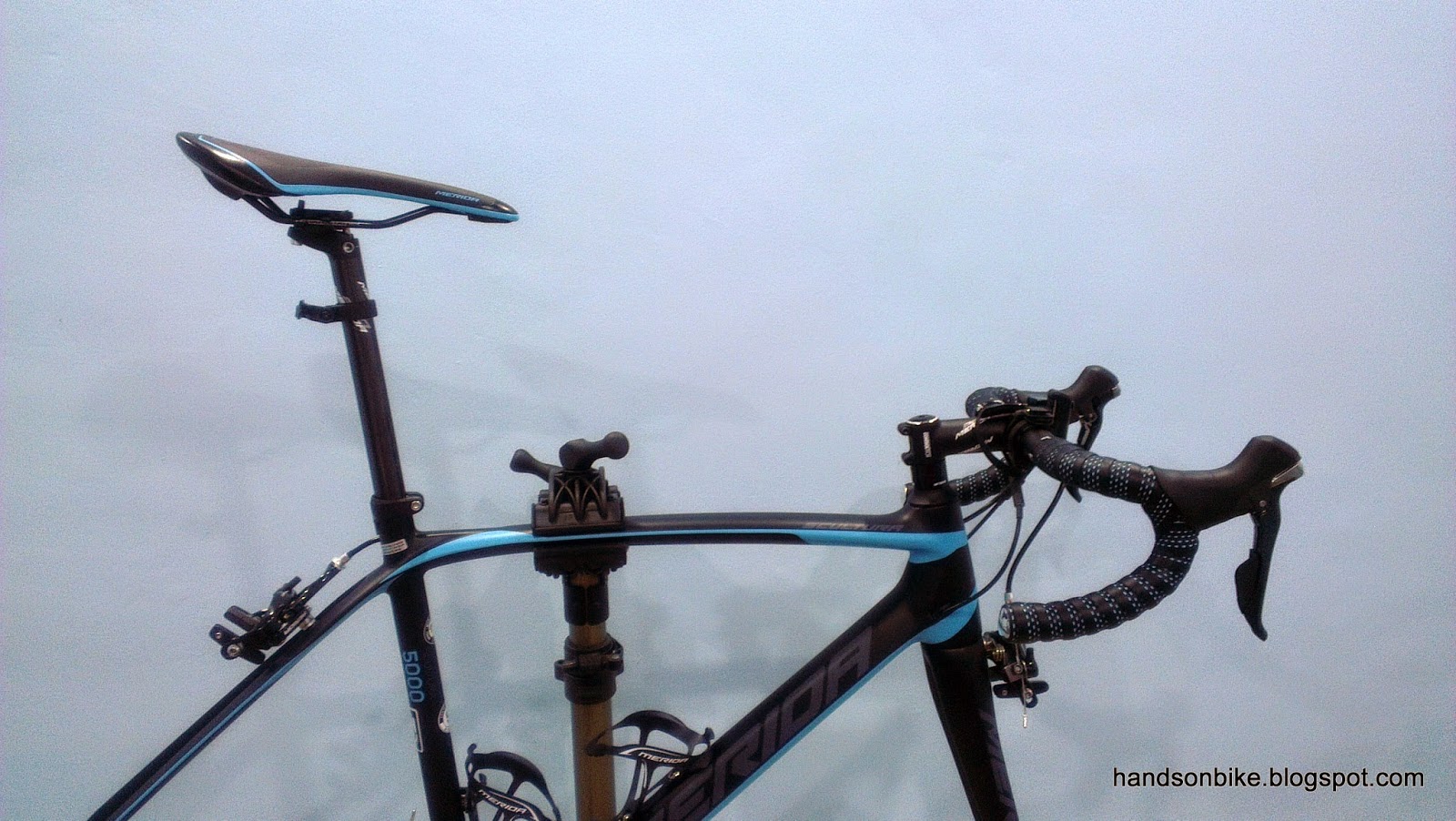 The long seatpost when inserted at the minimum insert length. 10 cm of the seatpost is actually still in the frame. 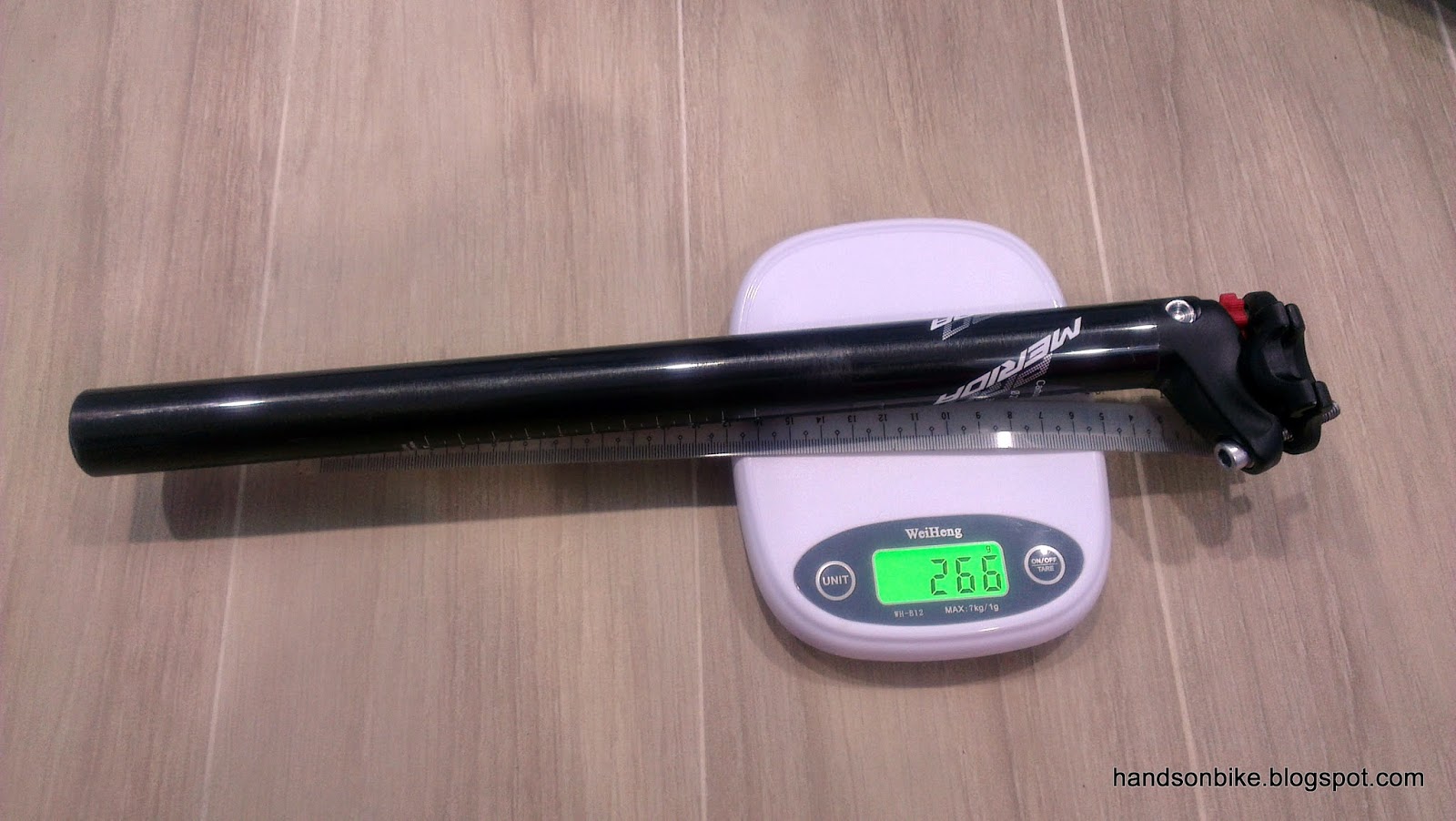 The stock Merida seatpost weighs about 266 grams, which is actually quite low considering the long length, and that it comes stock with the bike.

I estimate that if I cut off 10cm from the seatpost, the weight can be reduced by 50 grams. A small difference that is probably negligible. The majority of the weight is actually concentrated in the aluminium clamp at the top of the seatpost. Other carbon seatposts of comparable weight will cost many times more than this stock Merida seatpost.

Besides the seatpost, let's take a look at the stock Merida saddle. It is quite a decent looking saddle that has matching colours with the bike frame. 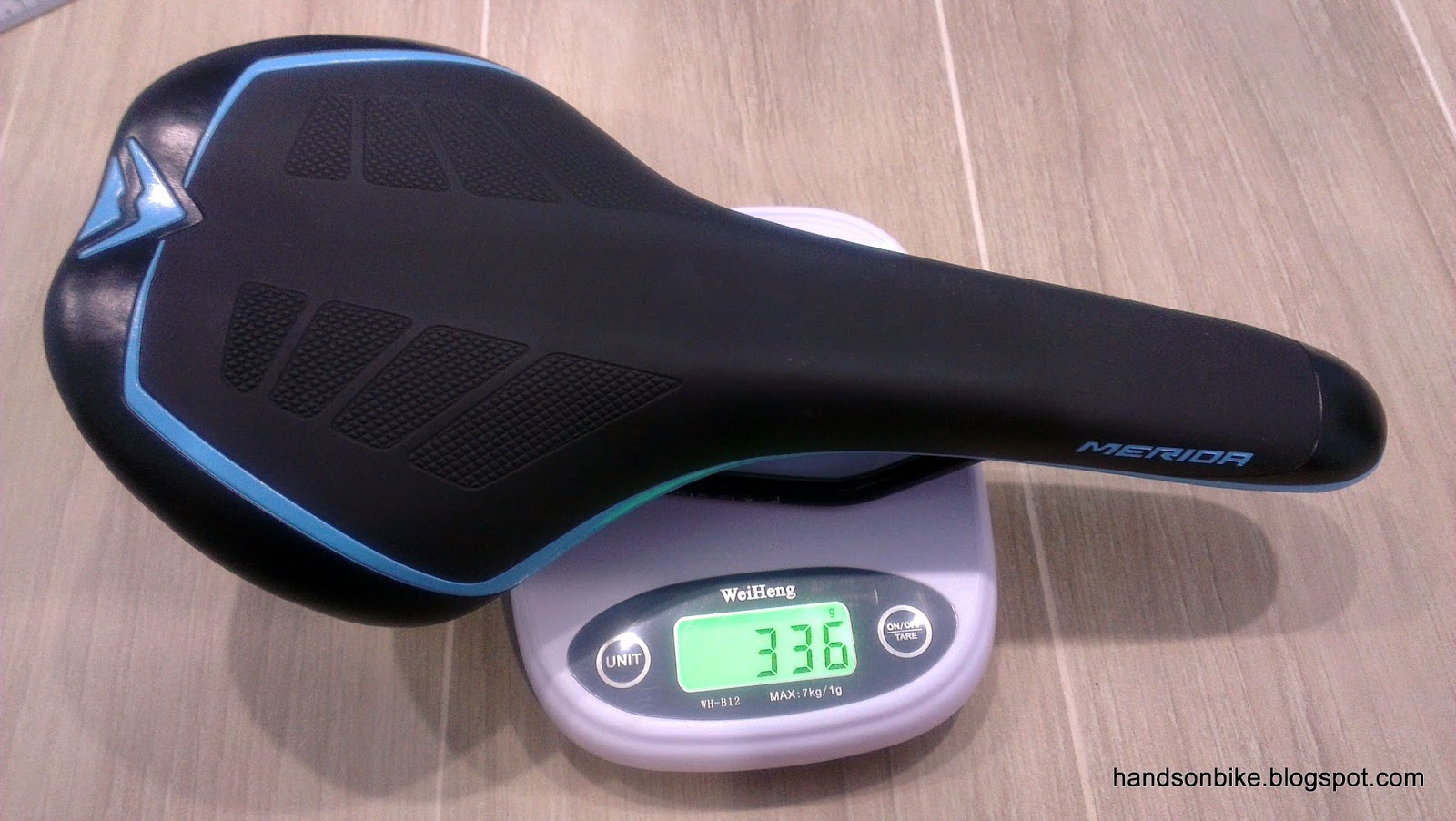 The stock Merida saddle weighs 336 grams, which is considered rather heavy for a road bike saddle. 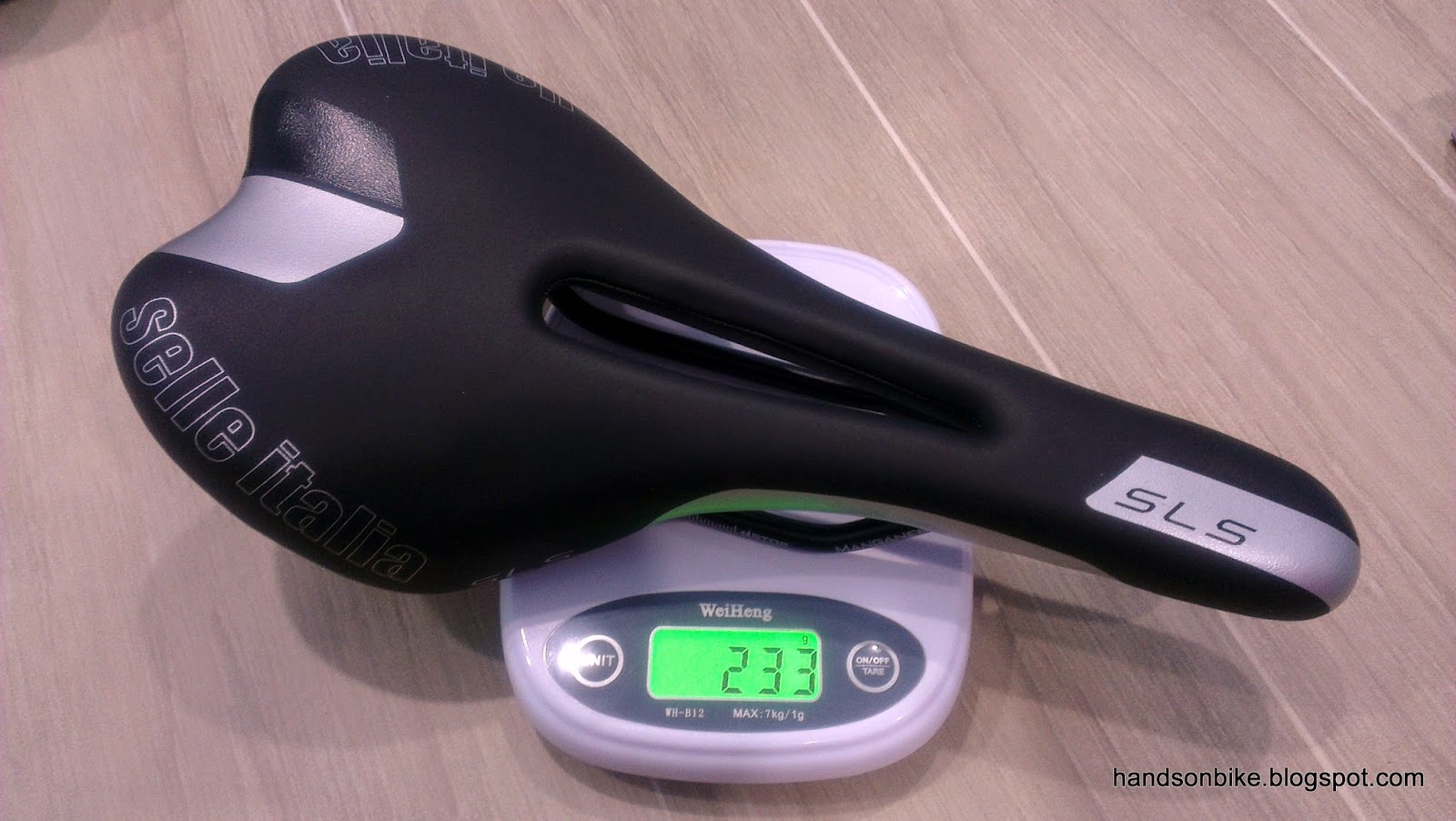 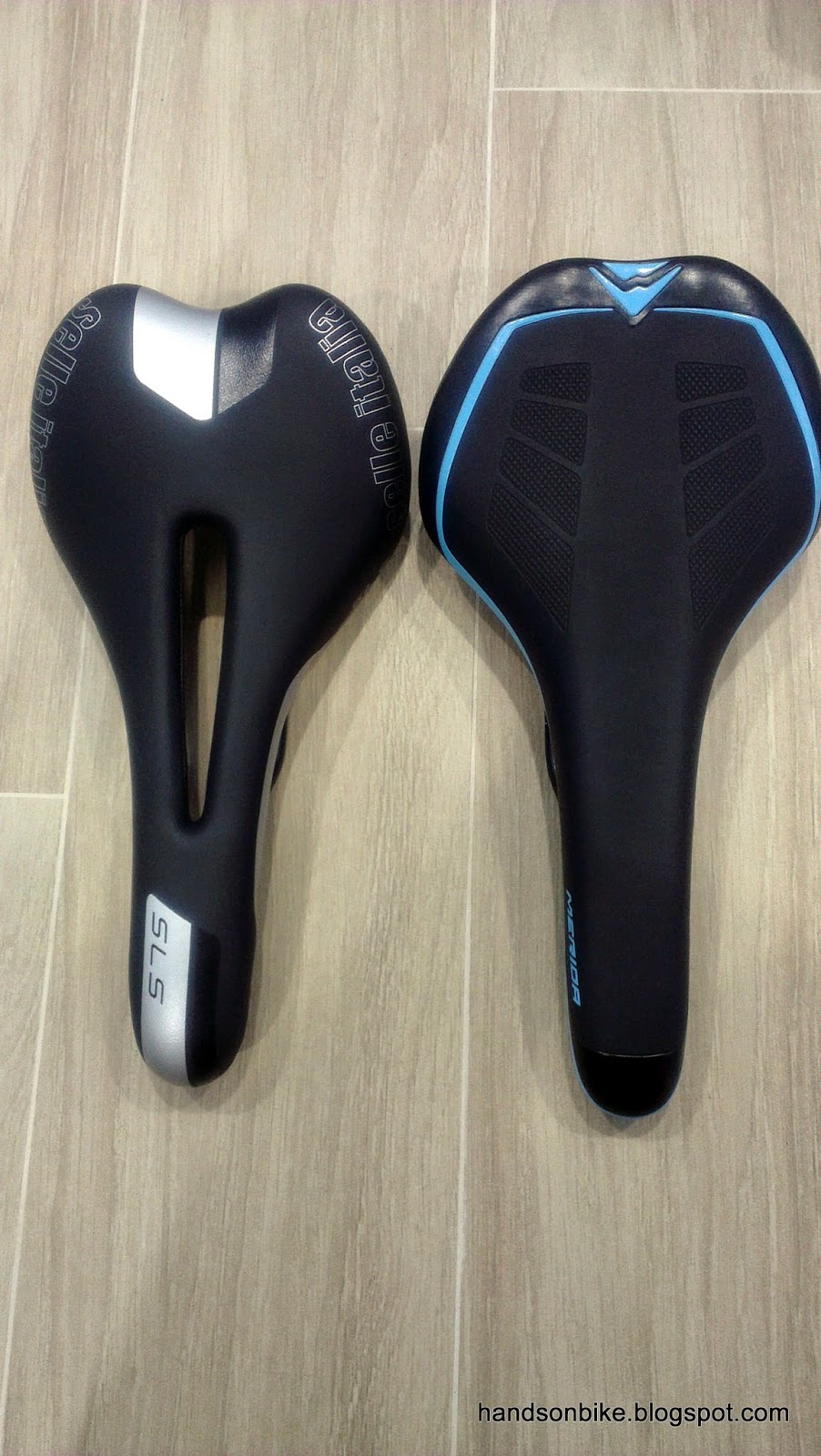 The 2 saddles side by side. The Merida saddle is longer and also wider. The Selle Italia saddle has a cutout in the middle which definitely contributes to the weight difference. 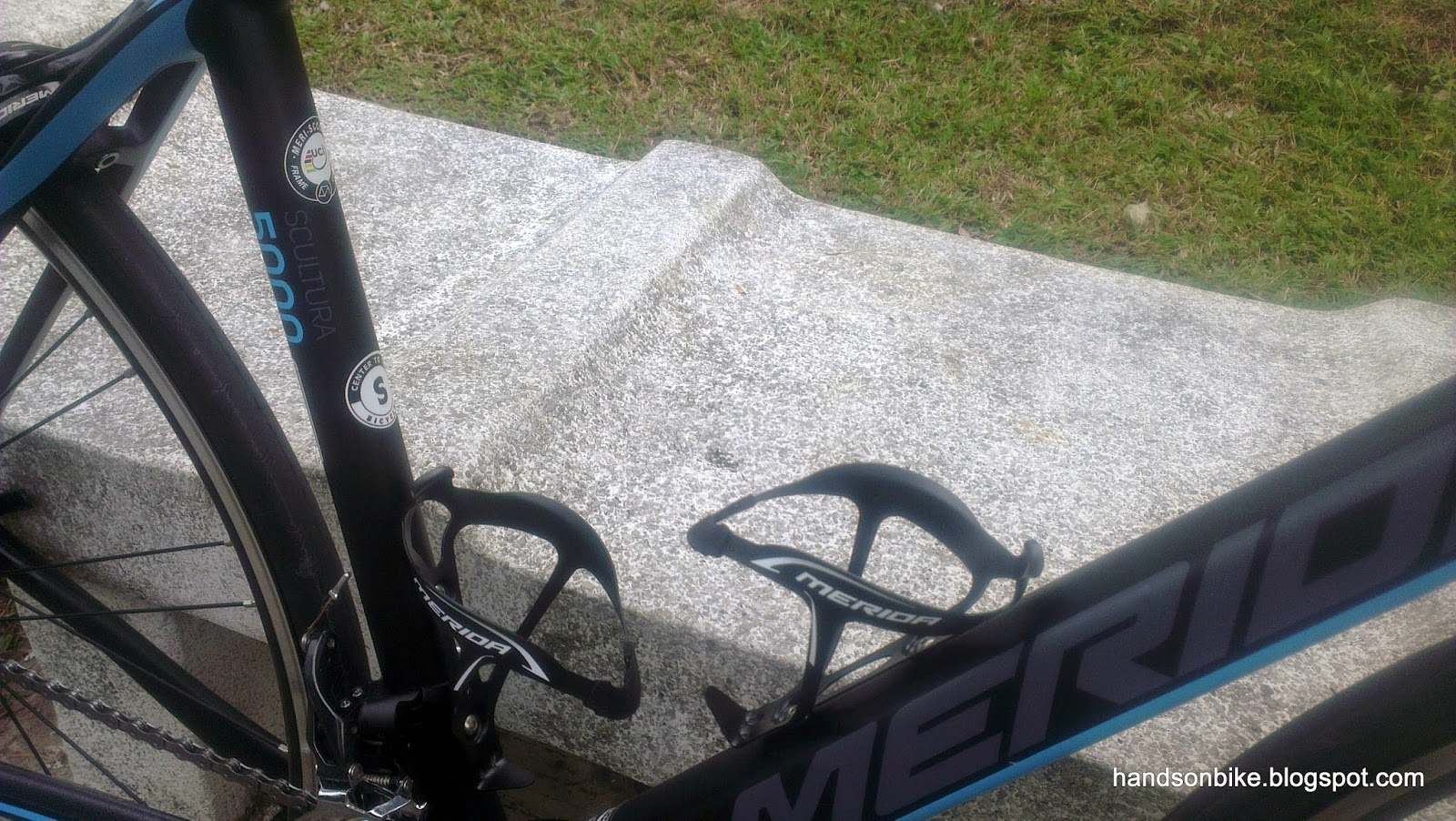 A pair of Merida water bottle cages! It would be perfect if the white Merida logo was in sky blue colour instead to match the frame colour perfectly. 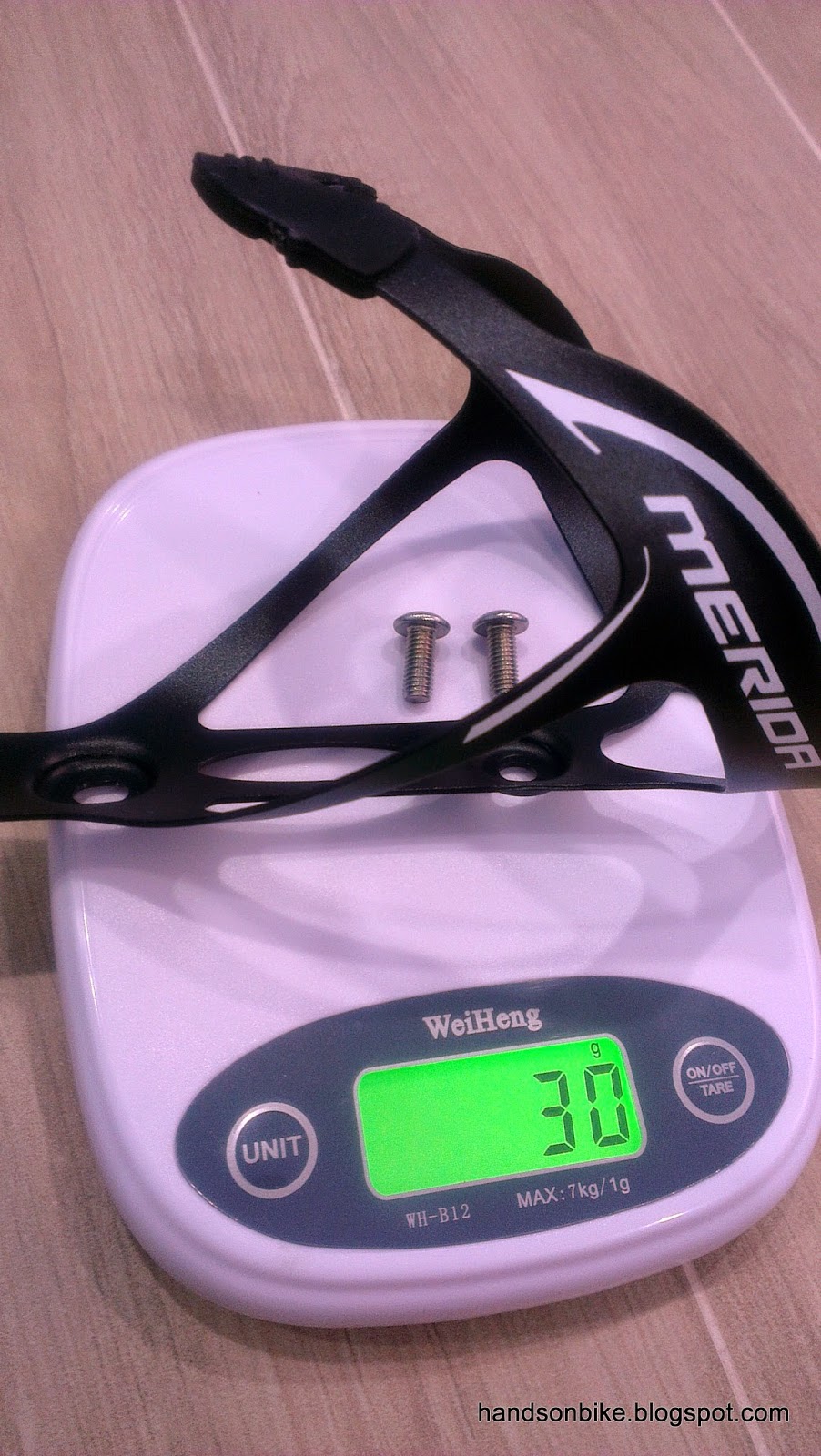 Weight of the alloy Merida bottle cage is only 30 grams. This is of similar weight to carbon bottle cages that cost many times more than this. 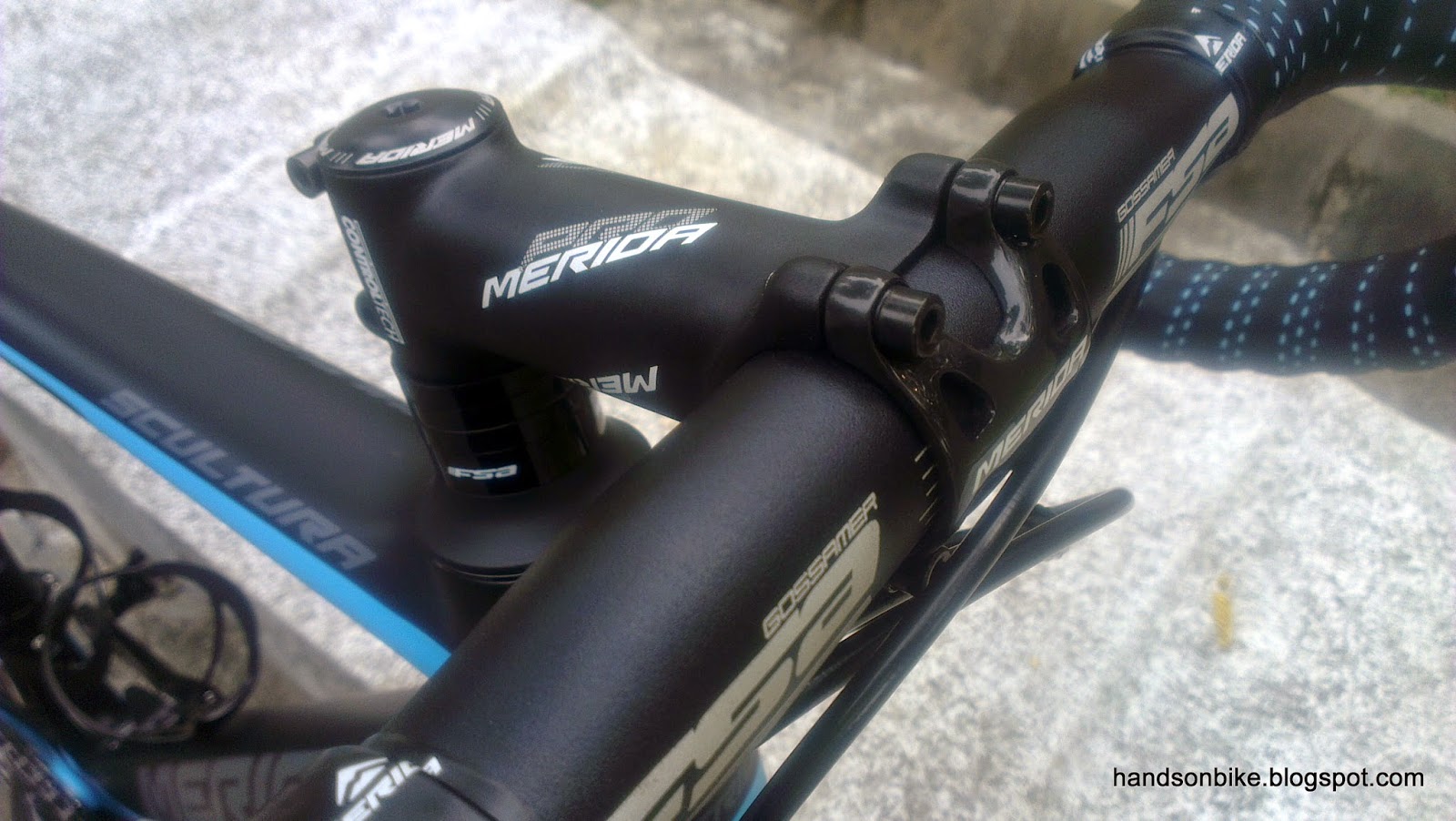 The Merida stem that comes with a carbon faceplate. How much does it weigh? 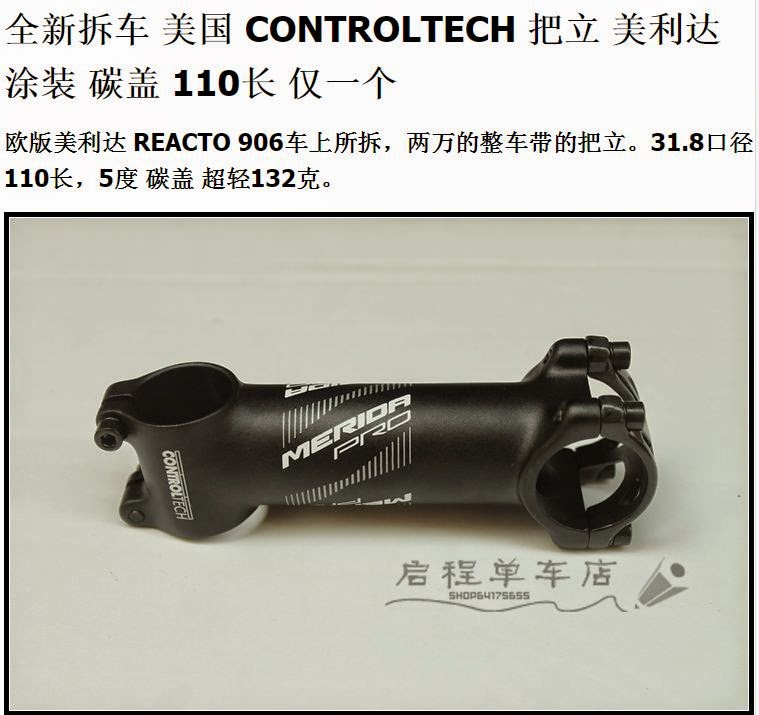 I found this stem on Taobao that looks very similar to the one on my bike. It also has a carbon faceplate. The stated weight is 132 grams for a 110mm stem.

Since my stem is a 100mm stem (I think), it will weigh slightly less than 130 grams. This is an excellent weight for a stem, regardless of whether it is made of aluminium or carbon. A fantastic piece of stock equipment that is of good quality, giving me no reason to change out the stem at all.

Not the lightest, but the compact shape is exactly what I like. I had also changed to a FSA compact drop bar on my Dahon Boardwalk, to improve the comfort and reduce the drop distance. 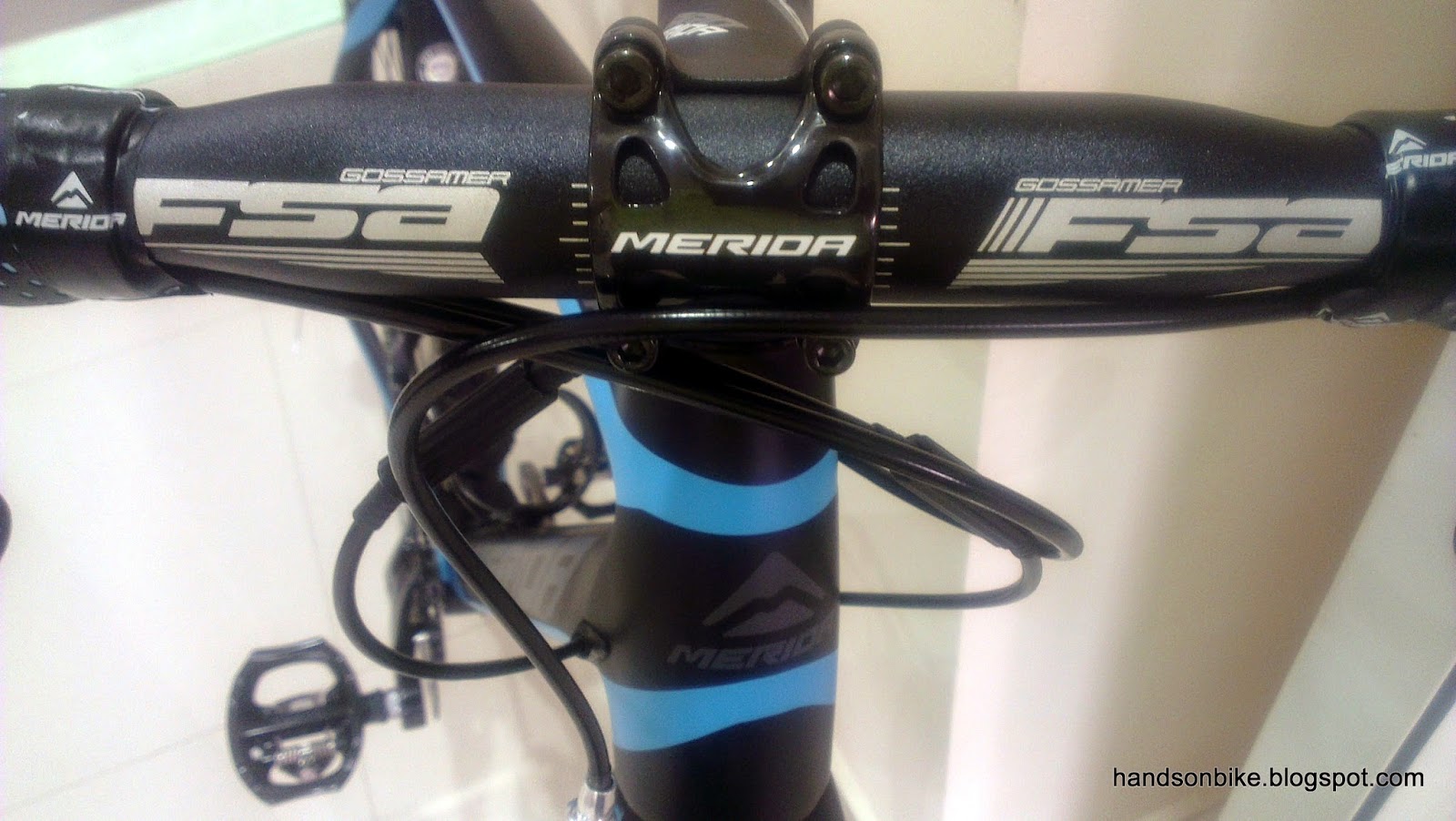 With that, I pretty much know what to upgrade on this bike, and what to leave alone. The stem and seatpost are of good quality and it is probably not worth changing them just to save a few grams. The handlebar is slightly heavier than comparable carbon drop bars, but the compact shape is nice and I will probably keep it.

The saddle has already been changed to save 100 grams and improve comfort (the stock saddle's nose was too long and keeps catching the back of my cycling pants when I start off). The weight weenie in me has somehow re-surfaced after I got this road bike. There are other upgrades that are lined up, and will be revealed after I make the changes. These upcoming upgrades are pretty interesting and will definitely cut more weight off the bike. Find out soon!
at October 26, 2014