Now, with all the Ultegra Di2 and XTR Di2 components gathered, and the compatibility issues solved, the Dahon MuEX is now ready to be upgraded! However, before mounting all the new Di2 components onto the bike, it is best to connect all the components together and update the firmware first. If there are any issues, it would be easier to troubleshoot with the components off the bike. 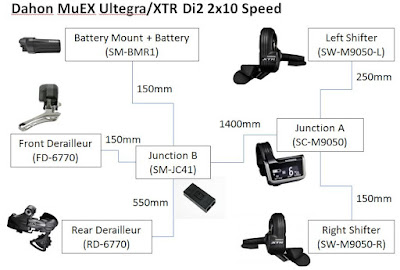 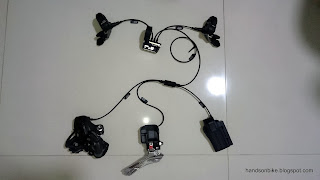 The wiring for this Di2 setup is very straightforward, as can be seen from this picture. Nothing complicated.

Once again, the PC Linkage Device is used to update the Di2 firmware. This is not as straightforward as the components are not the default road Di2 components, since it has some XTR Di2 parts in it. As such, the XTR Di2 components need to be manually selected when choosing the components for identification and updating. 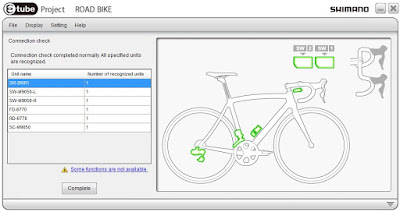 XTR Di2 shifters (SW-M9050) and System Display (SC-M9050) have to be manually selected for identification and update. 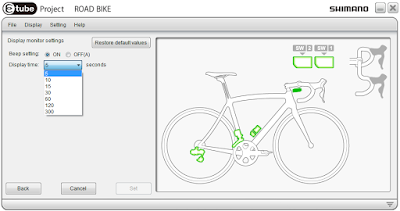 Once updated, there are some options that can be configured, such as multi-shift for the shifters. Shown here is the choice of gear display duration for the Di2 System Display. 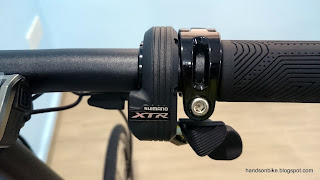 XTR Di2 shifter mounted on the handlebar. Sufficient clearance between the levers and the brake lever clamp band for comfortable operation with the thumb. 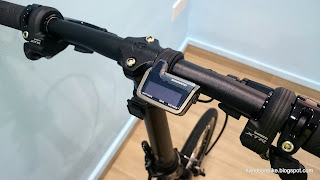 XTR Di2 System Display mounted near the centre of the handlebar for easy viewing. 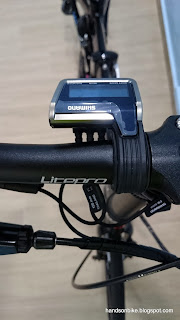 As the default clamp band is for diameter 31.8mm handlebars, a rubber shim from the old S-Sun front light is used to mount it onto the diameter 25.4mm LitePro Monster handlebar. 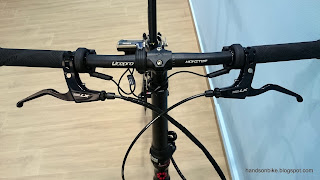 With everything mounted onto the handlebar! The wiring is kind of messy, but I don't have a way to tidy them up. On the other hand, the wire from the System Display to Junction B is routed along the rear brake cable, so at least that part looks neat.

However, for electronic shifting, one thing to take note is that the Di2 front derailleur is very powerful. It will push the chain strongly against the side of the larger chainring, when shifting from the small to large chainring. As such, for a smooth and successful shift, the larger chainring needs to be very stiff to withstand the forces and not deflect too much. This is one of the reasons why the stiff and lightweight HollowGlide chainring is recommended for use with Di2 shifting. 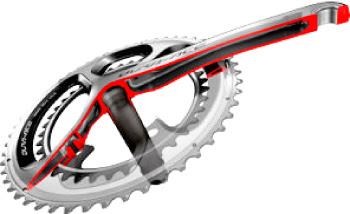 With the Shimano 105 crankset, the 53T outer chainring is a single piece of flat aluminium chainring, which is good but not as stiff as the HollowGlide chainrings found on Ultegra or Dura-Ace cranksets. Since the Dahon Boardwalk has already received the new 11 speed Ultegra 6800 crankset, the natural thing to do is to use the older 10 speed Ultegra 6700 crankset on this Dahon MuEX.

I did not want to increase the overall weight of the bike with this Di2 upgrade, therefore I also decided to change the bottom bracket and the crankset to a more lightweight version, to offset the Di2 weight increase.

Weight comparison of the components, before and after. Overall weight of the bike is maintained. 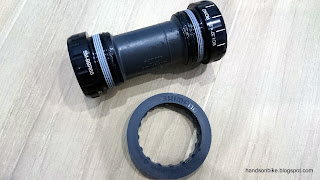 The new Ultegra grade bottom bracket, BBR60. Not as small as the Dura-Ace 9000 BB, but smaller than the standard Hollowtech II BB. As such, it requires yet another adapter to use with the standard BB tool. 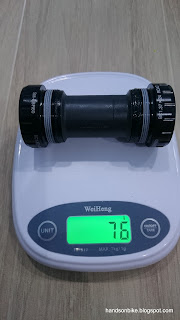 Lightweight at only 76 grams 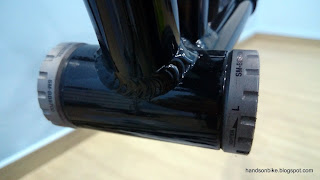 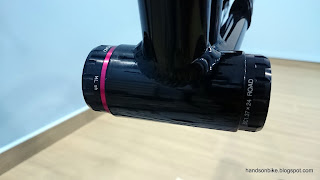 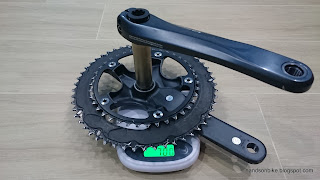 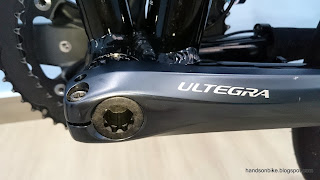 The longer crank arm fixing bolt from the Ultegra 6800 crankset is required to allow it to engage the spindle, due to the offset of the right crank arm.

I am unable to use the original Ultegra 6700 crank arm fixing bolt, as the threads are not long enough to engage the threads in the spindle. This is due to the 2.5mm offset caused by the red spacer under the right hand adapter. Also, this means that the crankset is slightly offset to the right side, and the Q-factor for the left and right sides are slightly different. Hopefully this will not have a big impact on the pedaling.

A few more pictures of the assembled bike! 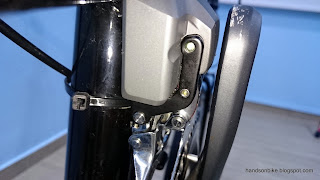 With the extra spacer under the right hand adapter of the BB, there is now good clearance between the FD and the right side crank arm. 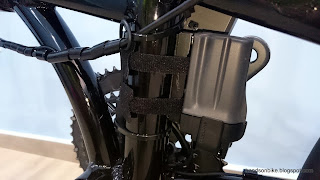 Di2 battery, battery mount and the DIY mount velcro-ed to the frame. Black mounting tape was inserted between the frame and the DIY mount. I chose to use the wider velcro straps instead of cable ties for more stability. 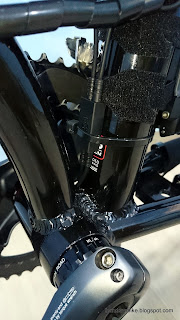 Junction B mounted on the front of the seat tube with mounting tape, and cable tied for extra security. No danger of it falling off or moving as it is so lightweight. 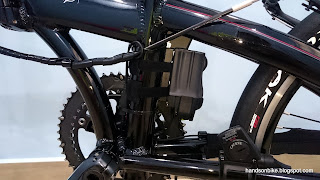 Overall view of the seat tube area, with the battery and Junction B mounted in that area. Note the Di2 wire from Junction A that is routed along the rear brake cable, and into Junction B. 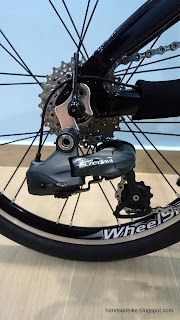 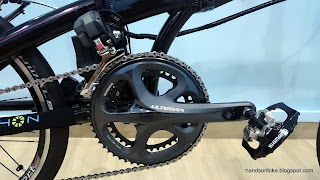 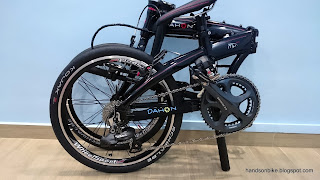 No problem with folding the bike, still as compact as before. 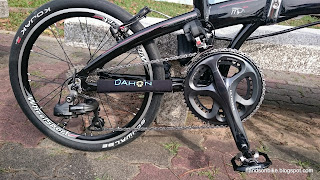 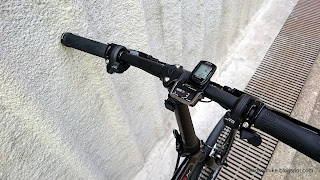 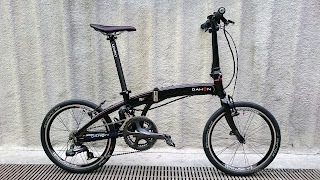 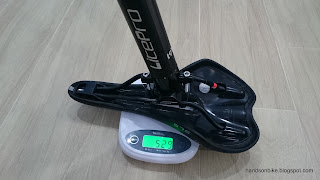 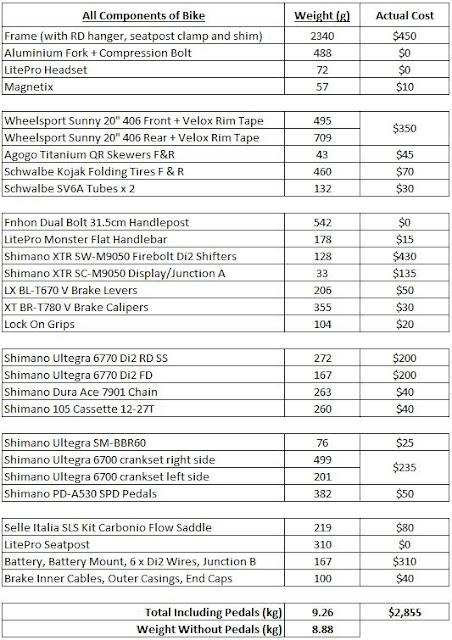 Summary of the weight and cost of this newly upgraded Dahon MuEX Di2. Still cheaper and lighter than the Tern Verge X20!

With this upgrade, the Dahon MuEX has been transformed. It is still a lightweight and high performance 20 speed folding bike, but now with Ultegra/XTR Di2 components for effortless shifting. Maybe not so affordable now, but it is totally different from what is available out there. This is probably the only folding bike in the world with this Ultegra/XTR Di2 setup! 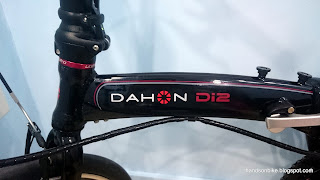 Added a Di2 sticker onto the bike to highlight the difference. The red Di2 logo matches well with the red accents on the bike!

In addition, shifting with the XTR Di2 shifters is really fun and enjoyable, as every shift is crisp yet effortless. It is very easy to shift multiple gears, and there is no need for any trim adjustment of the front derailleur, since trimming is done automatically for Di2 drivetrains. The bright and sharp display also gives useful information about the current gear position, which is really useful for me.

Overall, this has been a good upgrade, where I have managed to install a hybrid Ultegra/XTR Di2 system on a folding bike, and also learnt a lot along the way.
at August 09, 2015