The Wheelsport Fantasy Mini Velo is a really nice bike that I built up all by myself. After getting the frame and fork from the distributor, I sourced for all the bike components and installed them to the bike over a period of time. 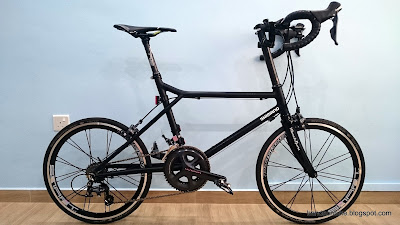 Recently, I did try to sell off the Wheelsport Fantasy mini velo, which is nicely equipped with the Ultegra 6800 2x11 speed groupset and a collection of other good components. The reason for selling it off is because I have too many bikes, and I can't find the time to ride them all. Besides, since I already have a folding bike (Dahon MuEX) for portability and a road bike (Merida Scultura) for speed, the Wheelsport Fantasy is kind of redundant since it is neither as compact as the Dahon MuEX nor as fast as the Merida road bike.

However, there were no takers for this bike despite the good price and excellent condition of the bike. Most people prefer either a folding mini velo such as the Tyrell FX or a pure road bike. There is no urgent need for me to sell this bike, so instead of trying too hard to sell it off, I decided to keep the bike and re-purpose it.

This means a new project for me! I have done many bike projects, from heavily modifying a Dahon folding bike from 7 speed to a 2x11 speed Di2 drop bar bike, to building up new bikes from scratch (Dahon MuEX and this Wheelsport Fantasy mini velo). Therefore, it would take something different to find a fresh project that is new and interesting for me. 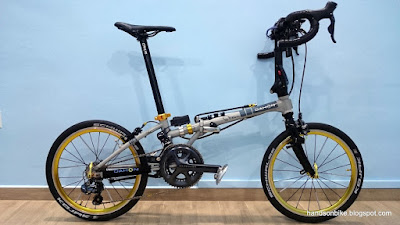 The first and most heavily modded bike that I worked on, the Dahon Boardwalk. I learnt so much about bicycles from upgrading this bike. 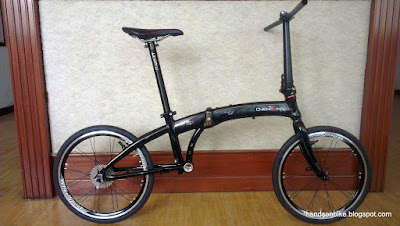 My first bike that was built from scratch, after buying only the bike frame. Objective was to build an affordable, high performance and lightweight folding bike.

If I were to start a new project with the Wheelsport Fantasy mini velo bike, then I want to do something different that I have not done with my other bikes. Based on specifications alone, this bike can be considered a pretty high end bike, with a full Ultegra 6800 groupset, top of the line seat post, saddle, stem, handlebar, tires and etc. There is not much room to further improve this bike unless I go for even more expensive stuff. Instead of trying to improve it, I wanted to make it unique and different from my other bikes.

Some project ideas that popped into my head was to make this bike super lightweight, or to go for a front single setup, or to change to a flat handlebar setup. At the same time, I did not want to spend too much on getting too many new components for the bike.

After some consideration, I decided to go for a front single 1x11 speed setup, which is something that I have not done before. Also, since a front single setup allows for some weight savings from losing the front derailleur and the inner chain ring, I decided to go all the way, and set the secondary objective to be cutting weight from the bike wherever possible. This will be done while minimizing any spending on new components.

In order to go for a front single setup, one important consideration is to prevent chain drop from the chain ring. Previously when I upgraded the crankset on the Dahon Boardwalk from the stock crankset to Shimano 105 crankset, I suffered frequent chain drops when I shifted the rear derailleur outwards quickly. The chain would fall off the chain ring as there is no front derailleur to prevent the chain from jumping off.

This chain derailment is partly due to the shorter teeth on the double crankset, which is designed for smooth shifting, unlike the single chain ring which has taller teeth. The solution was to install the inner chain guard and also the external chain guard on the crankset to prevent the chain from falling off.

However, for this new setup, I would like to simplify it and not resort to using a chain guard to prevent chain drop. 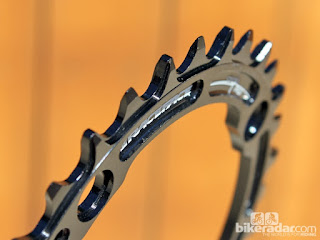 This type of narrow wide chain ring is usually reserved for mountain bike usage, where there is off road terrain that is bumpy. However, there are also road versions which are designed for cyclocross usage. The bolt circle diameter (BCD) and the number of teeth would be designed to suit road cranksets.

Since I plan to use the current Ultegra 6800 crankset, I would need to get a narrow wide chain ring that can fit the crank arm. The tricky part is getting a compatible chain ring as the BCD of the 4 arm crankset is 110mm and the 4 arms are unevenly spaced. After some searching, it seems that only Wolf Tooth has the type of chain ring that I need.

I got the largest sized chain ring that they have, which is the 44T Drop Stop Narrow Wide chain ring in the unique Shimano 4 arm road crankset BCD and arm angle. 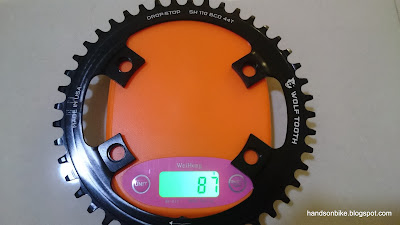 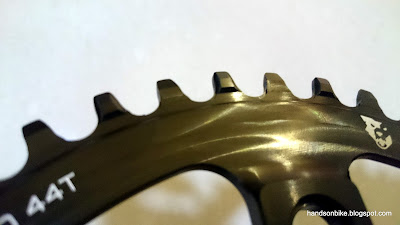 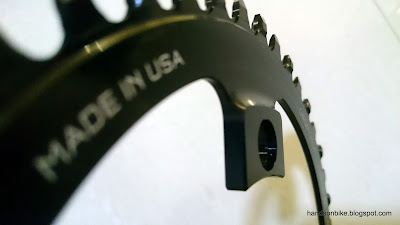 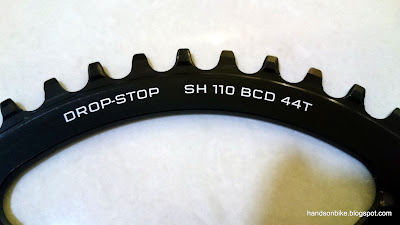 Comes in 110mm BCD and the Shimano road 4 arm configuration 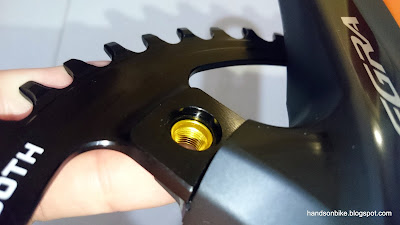 A chain ring bolt for double chain rings has to be used as the mounting area is thicker. The length is perfect as the nut length is just below the counterbore on the chain ring. 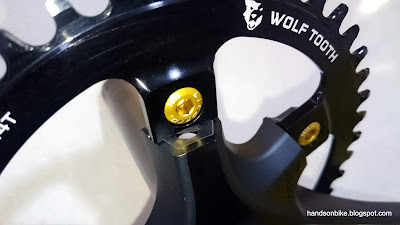 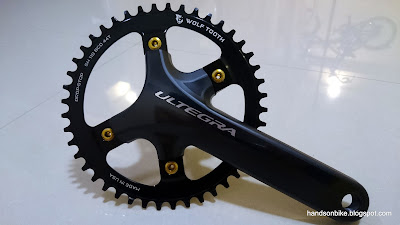 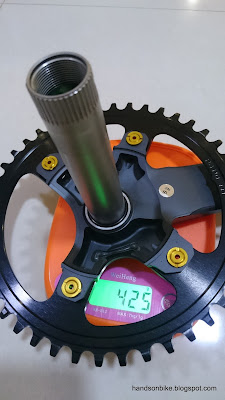 Weighs 425 grams for the right side crank 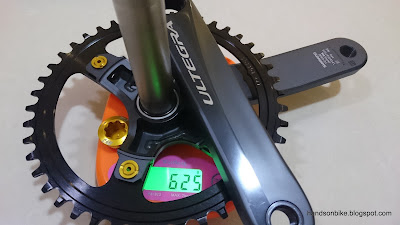 625 grams for the complete Ultegra crankset. Still heavier than the Dura-Ace 9000 crankset with double chain rings though... 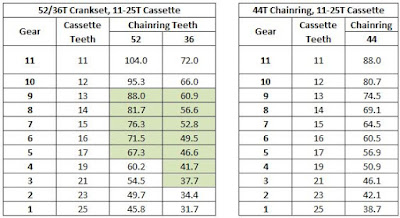 Gear range is reduced when the 2x11 speed drivetrain is changed to 1x11 speed, with the top two and bottom two gears sacrificed. However, there are still 11 fully usable and non-overlapping gears.

Will this gearing be sufficient? Before actually changing to the 1x11 setup, I rode my usual routes and took note of the highest gear that I usually use. Since this is not a road bike which is capable of higher speeds, I found that the highest gear that is normally used on this bike is Gear 9 on the 52T chain ring, which corresponds nicely to the top gear in the 1x11 speed setup (88 gear inches). The 10th and 11th gears are only used when sprinting really hard or pedaling downslope. 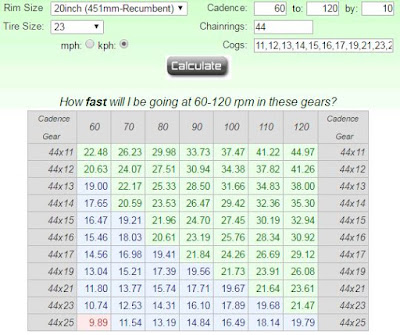 Speed vs cadence at different gears

With a speed of 37 km/h when pedaling at 100 RPM in the highest gear, this is more than sufficient for sustained speed, although it would be good to have one higher gear for the occasional sprint. I would have preferred a chain ring with 46T or 48T, but it is not available in those sizes.

This also means that the top gearing is too low for pedaling when travelling downslope, but I am OK with it as I would not want to go downslope too fast on a mini velo. On the other hand, the lowest gearing of 38.7 gear inches also means that steeper slopes will be really tough, but that is a compromise of having a 1x11 speed setup. Changing from a 11-25T to a 11-28T cassette would give a lower gear, so that is an option in the future.

With the chain ring and gearing for 1x11 speed settled, the next step is to reduce the bike weight by shedding off as many unnecessary components as possible.