Do you ride a bike that has a heavy front? By heavy front I mean that when the bicycle is parked, the handlebar tends to tilt to the side, and over-rotate. This causes the whole front wheel to flip to the side, and if the front of the bicycle is heavy, the whole bike will fall over, even if it is resting on a kickstand or resting against the wall.

For most road bikes, they can be supported easily against a wall or on the kerb using the pedals, as they are lightweight. Mountain bikes are usually placed with the bar end against the wall, or just laid down on its side on the ground. Other bikes may have kickstands to hold the bike up when parked.

In my case, I have some problem with parking the Avanti Inc 3 when outside. As there is no kickstand, I will rest the bar end of the Ergon GP3 grips against the wall when parked. However, the bike will sometimes roll forward or backwards due to a slight incline of the ground. This causes the handlebar to rotate and the whole bike will fall over.

When there is no wall to lean against, I will rest the bike against my body when stopping for a short while. Even then, the heavy front end will rotate and cause the bike to fall over easily. This is due to the wide handlebar and the many accessories on the handlebar.

The basic component of a steering stabilizer is the spring, together with the mounting brackets at each end that mount to the front fork and the downtube of the frame respectively. The spring has to be sufficiently strong to hold the front fork, yet have some play to allow normal steering.

The spring comes from an unused kickstand, which seems to have a suitable length and spring force.

The L-shaped mounting bracket is something that I found from my box of random hardware, and it fits nicely on the back of the front fork. 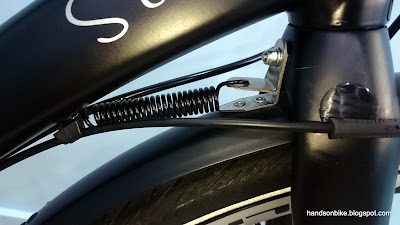 Basic construction of the DIY steering stabilizer. One end of the spring is held to the front fork by a bracket, while the other end is fixed to the cable holder. 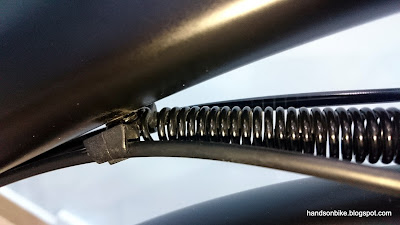 One end of the spring is hooked around the bolt that fixes the cable holder to the frame. Since the force is transmitted through the metal bolt, there is no strength issue here. 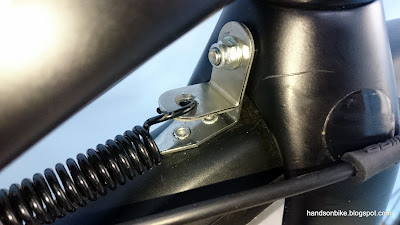 The other end of the spring hooks onto the L-shaped bracket, and is fixed to the front fork using the fender mount.

After that, it is a matter of adjusting the spring force to ensure that there is little or no spring resistance during normal steering. On the other hand, the spring force will be activated when the handlebar is rotated beyond a certain angle. This is adjusted by stretching and deforming the spring. 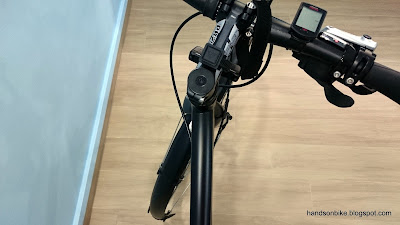 After installing the spring, the handlebar will encounter resistance when rotated beyond 20 degrees to either side. This is more than the steering angle required for normal riding. 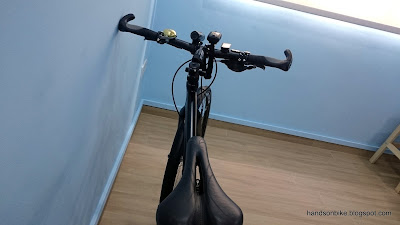 As shown here, the spring prevents further movement of the handlebar, which enables the bike to be parked this way without falling over. 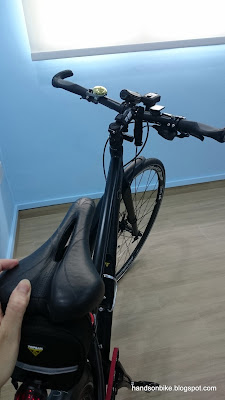 When the bike is held by the saddle, the handlebar can only rotate naturally 20 degrees to either side. Does not affect steering at all. 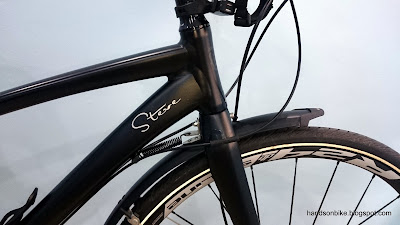 DIY steering stabilizer fixed under the downtube of the bike, and is not obvious at all.

With this steering stabilizer installed, parking this bike is now easy, with little risk of the bike tipping over. Riding and steering of the bike is not affected at all because there is almost no spring resistance at normal steering angles.

If you have the same problem with your bike, this steering stabilizer will solve the issue!
at August 20, 2016