Based on reviews, this seatpost works really well as it flexes when you ride over bumpy surfaces, absorbing a lot of the bumpiness. I was curious to try it out for myself, to see how effective it really is. 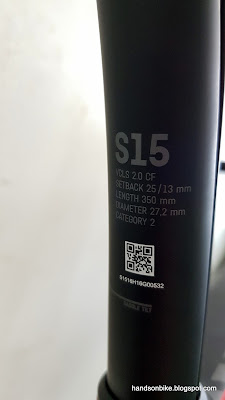 S15 seatpost, with quite a bit of setback. It has a standard diameter of 27.2mm, which is good because you can always replace it with a standard seatpost if you don't like it. 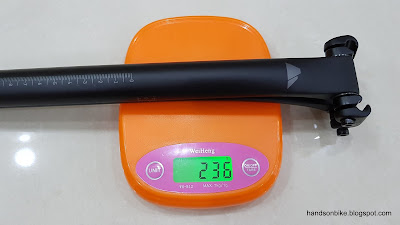 Weight of 236 grams for the 350mm long seatpost. Surprisingly lightweight given the suspension feature built into it.

How this suspension seatpost works is quite simple in theory. There are two halves of the seatpost, the front half and the rear half. By splitting the seatpost, and allowing some space in the middle for movement, bumps can be absorbed by the flexing of the seatpost instead of being transmitted to the rider.

The downside of this design is that if you want to change the tilt angle of the saddle, you need to remove the whole seatpost, and offset the front half from the rear half. This is troublesome and takes a bit of trial and error, but thankfully this only needs to be done when you are setting up your bike riding position for the first time. 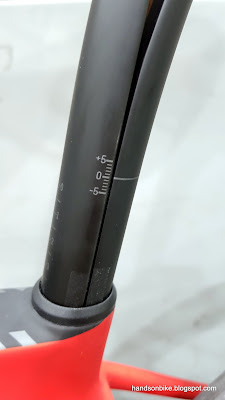 Default setting has the front and rear half aligned at zero offset. The other markings are to help you fine tune the angle. A small offset has a big effect on the tilt angle. 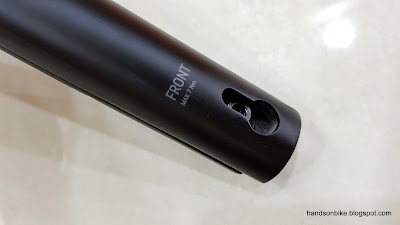 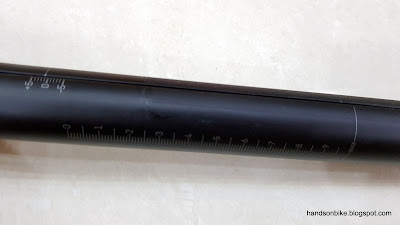 Height markings on the seatpost are useful for letting you know the previous seatpost height after removing it from the frame for tilt angle adjustment. 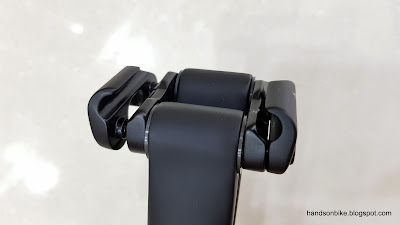 Saddle clamp design is quite simple, with two bolts at the side to tighten the two clamps inwards. Not suitable for carbon rails I think. 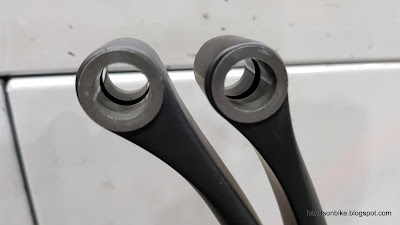 After the clamps are removed, what you see here are the two holes on top of the seatpost with grey plastic bushes.

This flexing effect is quite obvious, and can be felt even when pressing down hard with the hands. While riding the bike, you can feel some kind of bouncing effect if you sit down hard on the saddle. What is good is that no matter you are riding leisurely or riding hard, you don't really feel any weird movement in the saddle or seatpost.

When riding over rough surfaces, such as the bricked surfaces of carpark roads, or the speed limiting strips on park connectors, this seatpost does a great job in rounding off the bumps that you feel. In other words, it takes the edges off the bumps. Of course, you will still feel the bumps, but instead of sharp, jarring bumps, what you feel is softer, rounded bumps, which is less uncomfortable.

I am really happy with this seatpost as it genuinely works to provide some kind of suspension that makes it more comfortable. It will make a big difference on longer rides where it can maintain the rider's comfort.

Another stock component that came with the bike is the saddle. This is not a generic saddle, it is a Fizik Aliante R3 saddle that has pretty good reviews. Let's take a closer look. 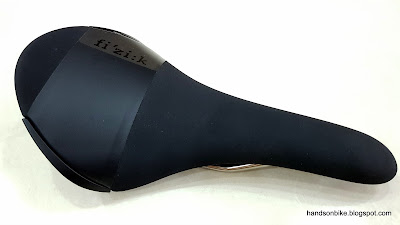 Understated look, with a smooth felt-like covering over most of the saddle. 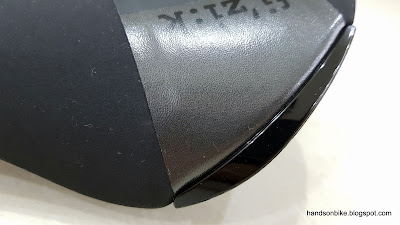 At the area where the sit bones rest on, it is covered by a tougher leather-like material. It also has plastic scuff guards at the side, to prevent damage when the saddle is rested against the wall. 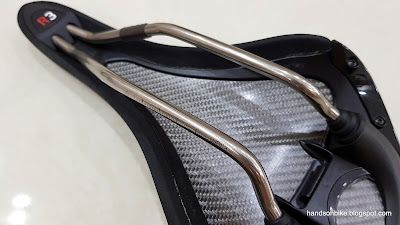 Steel rails are are used on this saddle. It is some unusual kind of alloy as it is only mildly attracted to a magnet. 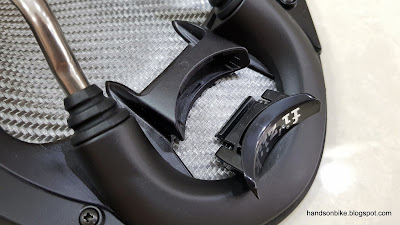 The Fizik Integrated Clip System (ICS) that is equipped on most Fizik saddles. This clip allows you to mount a rear light to the saddle if you want to. 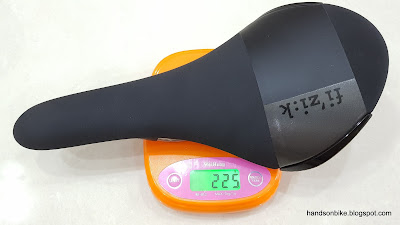 However, it was difficult to adjust the tilt angle of this saddle to find the sweet spot, as there is a very pronounced "upsweep" at the tail end of the saddle, as you can see from the picture below. After much trial and error, I discovered that the most comfortable position is when the middle to front portion is horizontal, and the rear end is allowed to sweep upwards.

In this position, the front end is flat to prevent undue pressure on the sensitive parts, while the rear end sweeps up to support the butt area near the tailbone. It becomes very comfortable, once you get the angle adjusted properly. When holding the hoods or the drop section of the handlebar, this saddle is very comfortable as you are well supported on your butt. However, when you try to sit up straight, the upsweep at the end of the saddle prevents you from sitting up properly. In short, this is a performance road saddle that is best used with drop bars, where you will be in a more aggressive riding position most of the time.

The overall height of the saddle (from rails to highest point) is quite high, due to the upsweep at the tail end. Not an issue for full sized bikes, but maybe not so ideal for folding bikes where the folded size needs to be compact. 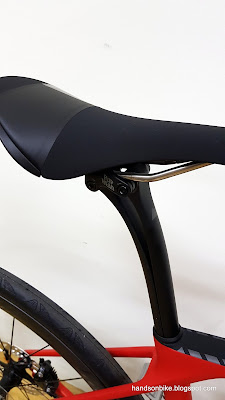 Adjusting the tilt of the saddle, so that the middle to front portion is flat, while the rear is allowed to sweep upwards. 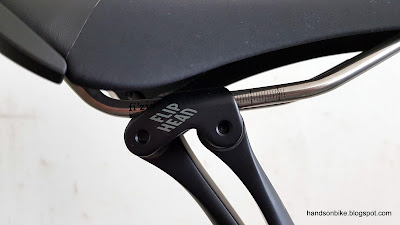 The saddle clamps can be switched from left to right, in order to adjust the offset amount. I switched it to shift the saddle forward.

In my opinion, this seatpost is a game changer that really makes a difference in riding comfort for road bikes. On its own, the seatpost is quite expensive, but when bought together with the complete bike, it is a worthwhile component to have. As for the saddle, I have not decided if I will keep it on this bike, transfer it to another bike, or sell it. Shall use it for a while more and see...
at September 07, 2017