It has been quite a while since I upgraded or got a new bike. Reason is that I have tried many different bikes, and I already know what I want. From there, the remaining bikes that I own are those that are really useful and are really what I want.

However, sometimes I do want to try riding a new bike, even though I don't need to own it. The best way to do this is to borrow a bike, preferably for an extended period of time, so that there is time to test it comprehensively.

For this year's OCBC Cycle, I wanted to try riding something different. Last year I rode the Brompton M6R for OCBC Cycle, so this year I want to test another bike. I asked MyBikeShop to see if I could borrow a bike from them, for me to try out for about one month or so. A folding bike is more ideal as I can transport it more easily to the start point of OCBC Cycle.

From the point when I borrowed the bike, to the date for OCBC Cycle, I had about one month to test ride the bike, with the final test being the OCBC Cycle 42km Sportive Ride. It is also a great chance to study the Tyrell IVE in detail, and to compare it with my other two folding bikes, the Dahon MuEX and the Brompton M6R.

As this bike is new to me, there are many details that I am seeing for the first time. In order for me to give a detailed account of the Tyrell IVE, I will need to split the blog post into a few parts, so that the post does not become too long. 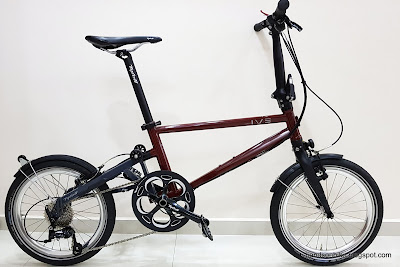 Tyrell IVE, the first 18" folding bike by Tyrell, with less focus on speed and more on urban practicality. 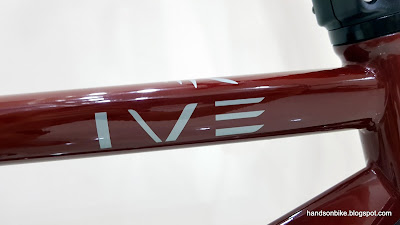 IVE logo displayed prominently on the top tube. This bike also comes in a dark red colour which looks good. 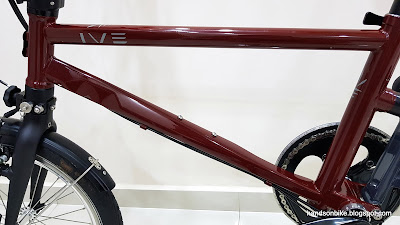 Triangular mainframe made of chromoly steel means that the ride will be stiffer than other folding bikes with just one big top tube, such as Dahon or Brompton. The tube shapes are also special, as they are not round tubes like most other steel framed bikes. 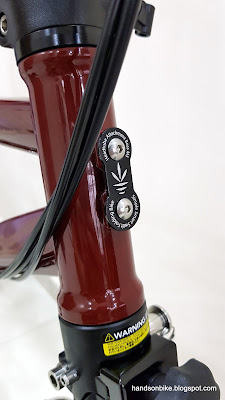 Front luggage truss mounting point is available, if you choose to mount a basket in front. 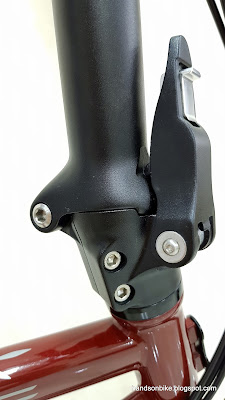 Handlepost design is similar to that by Tern, which clamps onto a long section of steerer tube. This should give a stiff handlepost, which Tern is good at. 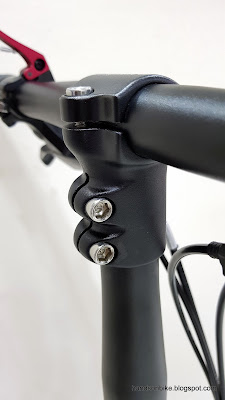 Interesting looking clamp that links the horizontal handlebar to the vertical section of the handlepost. After measuring, I found that you can actually mount a regular stem on the handlepost, with the handlebar offset forward like a regular full sized bike. 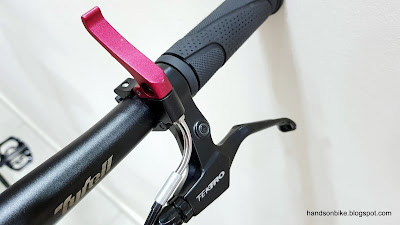 You can't miss this big red lever installed on the handlebar! 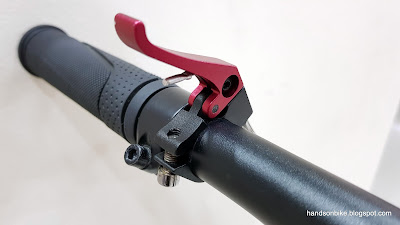 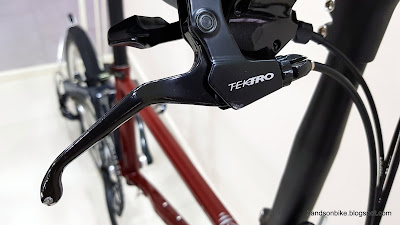 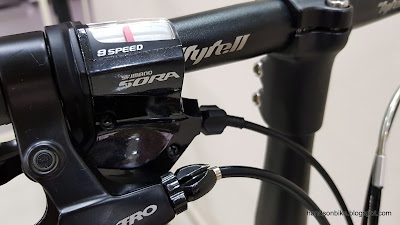 Shimano Sora 9 speed shifter, for road flat handlebar. 9 speeds should be sufficient for an urban bike. 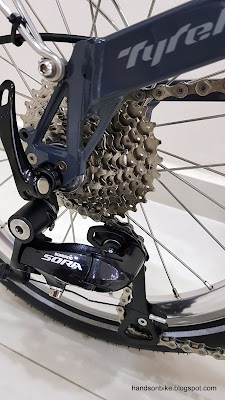 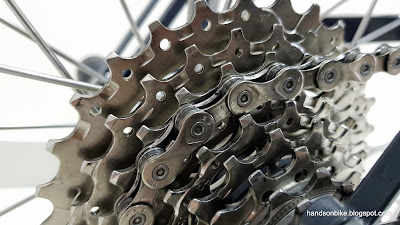 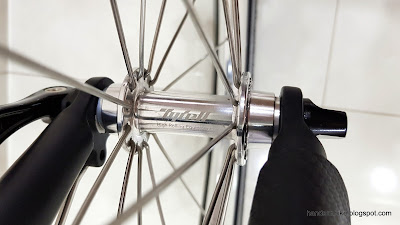 Tyrell branded front and rear hubs. Smooth spinning but not the lightest. 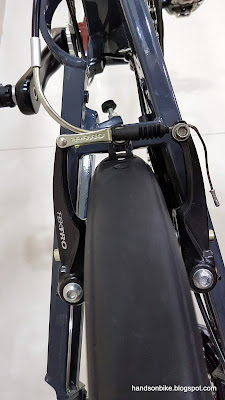 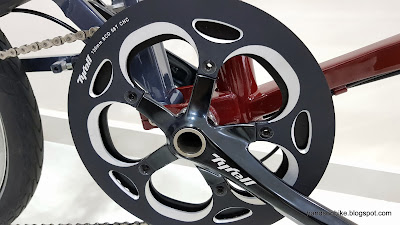 Tyrell branded crankset, with a 53T chainring but a 58T chainguard. Allows you to upsize the chainring while using the same chainguard. 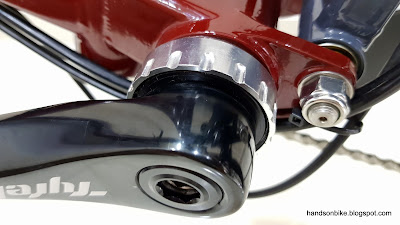 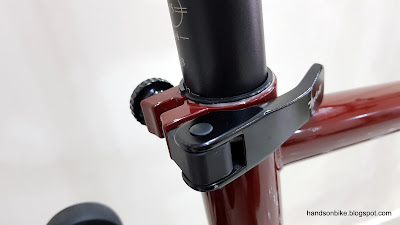 Seatpost clamp. The lever feel is not so nice as the shape is not ergonomic. Besides, the tip of the lever will scratch the top tube when you close the lever. 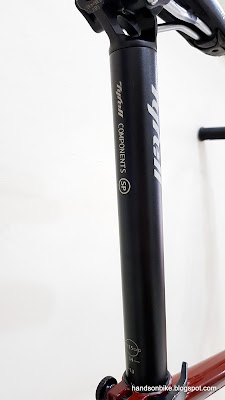 Another Tyrell branded component, the aluminium seatpost. It has the same diameter as Dahon/Tern seatposts, at 33.9mm. 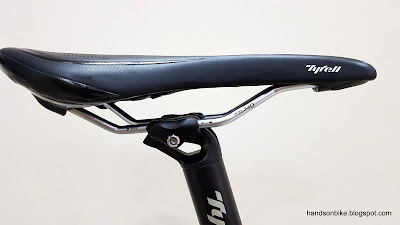 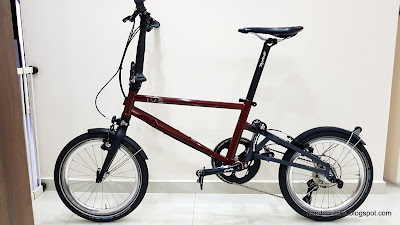 Another view of the full bike from the non-drive side.

The gear range, with 18" (16" actually) wheels, 53T front chainring and 11-30T rear cassette, will be 28.3" to 77". The actual gear range might be slightly higher due to the relatively fat tires. Even so, this gear range is still quite low, which is why some people upgrade to larger chainrings on this bike.

From my first impression, this bike has a nice frame design, with a sensible choice of components and parts. What is not so ideal is the weight, as it comes in at 11.5kg (without pedals) in stock condition. It looks lighter than it actually weighs, which I am not sure is a compliment or not. A regular Brompton M6R will weight about 12kg.

The chromoly steel frame and rear triangle probably contributes quite a bit to the overall weight. If those parts are made of aluminium, it will definitely be lighter, but the folding design might not work, as will be explained in the later posts.