One of the highlights of this new Dahon MuSP is the electronic shifting setup. It is not the first time that I am setting up Di2 electronic shifting on a folding bike, as I have already done it before on the Dahon Boardwalk and Dahon MuEX a few years ago. However, what is new here is internal cable/wire routing for this Dahon MuSP frame, which increases the challenge quite a bit.

Prior to getting these electronic components, I already had the Dahon MuSP frame in hand, in order to study how to set up and assemble the Di2 components onto this frame. I have a plan in mind, but this will be shown in a later post. Only after that was I able to get the required Di2 components, as the set up is rather unconventional.

For this post, let's take a look at the main electronic components, which are the Di2 rear derailleur and the Di2 shifters. 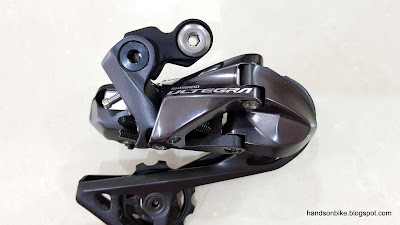 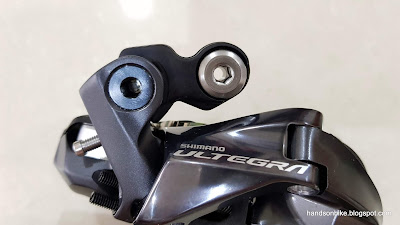 Rather strange combination of black and silver bolts here, especially as the black bolt does not match the dark grey colour. 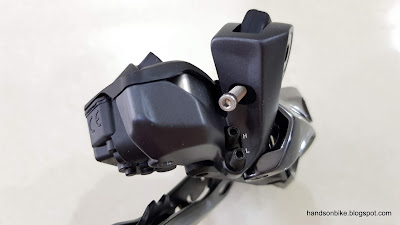 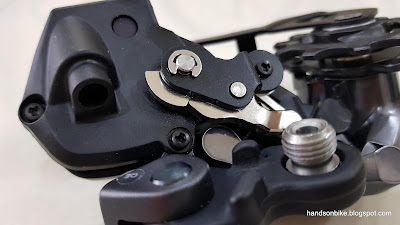 Di2 port is relatively well hidden, behind the main structure and on top of the motor unit. Saver unit also shown here. 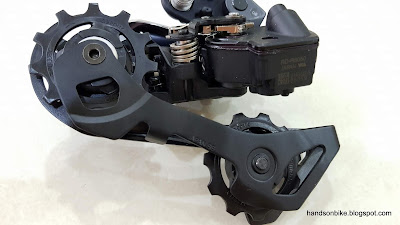 View of the cage set. Made of aluminium inner and outer plates. 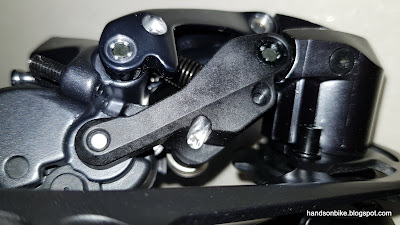 Inner link shown here with a rough texture, and looks like it is made of glass fibre reinforced plastic. 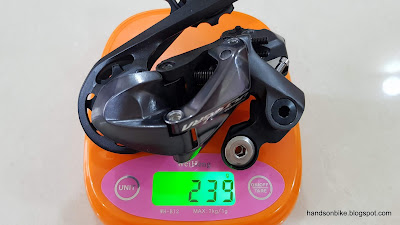 Weighs 239 grams for this Di2 rear derailleur, which is about 40 grams more than the Dura-Ace Di2 version.

This Ultegra Di2 rear derailleur weighs 40 grams more than the Dura-Ace Di2 rear derailleur, but it is about half the price, with a similar performance as the motor unit looks to be the same. The rational, and more value-for-money choice here would be the Ultegra version, as it is more cost effective compared to the Dura-Ace version.

These shifters are the electronic shifting, mechanical braking version. In other words, it is designed for Di2 shifting, and will be paired with the mechanical road caliper brakes. Although the trend now is for hydraulic disc brakes, it is not suited for this folding bike, which is why I am still using the mechanical brake version. 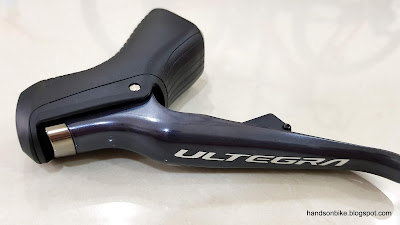 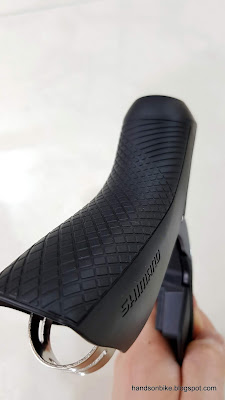 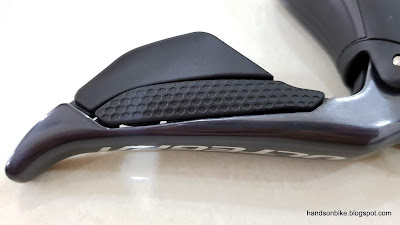 The electronic shift levers have been reshaped and enlarged slightly for better ergonomics. 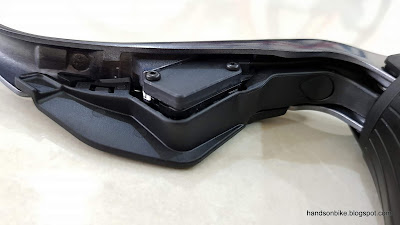 The tactile feedback of the buttons have also been improved, to give a stronger click feeling, much like the Dura-Ace shifters. 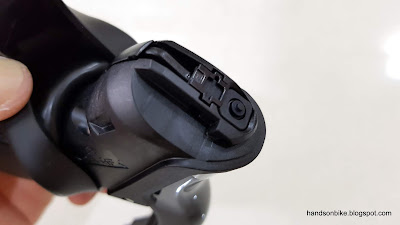 On this Ultegra version, there is even the extra button on top! Previously it was only available on Dura-Ace shifters, but now even Ultegra grade Di2 shifters have it which is really useful. 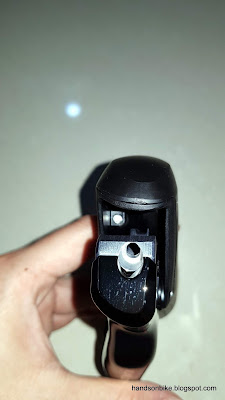 Hole at the front of the shifter for holding the cast head of the brake inner cable. Also note the grip adjust screw at the left side. 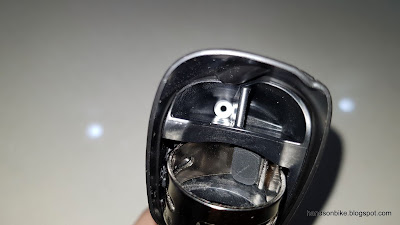 Small hole on the left side is for the brake inner cable to pass through, while the larger brake outer casing will slide into the holding area around the small hole. 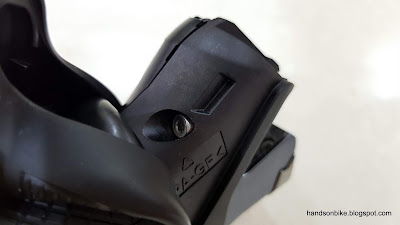 Grip adjust screw located here, which is used to adjust the lever position. 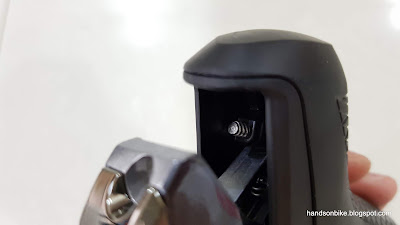 As this shifter will be used by a rider with small hands, the grip adjust screw is turned all the way in, to minimize the reach of the brake lever. 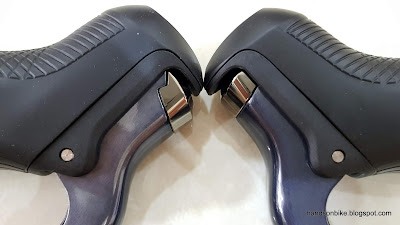 Comparing the position of the lever before and after adjusting the grip adjust screw. 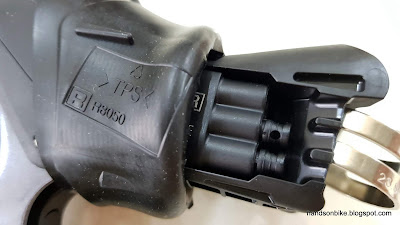 Hidden under the rubber hood are also 3 Di2 ports, which is increased from 2 previously. 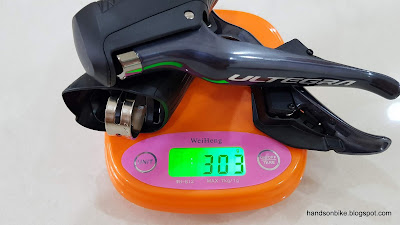 This pair of Di2 shifters weigh just 303 grams! Much lighter than the Ultegra 6800 mechanical shifters which weigh 424 grams per pair. 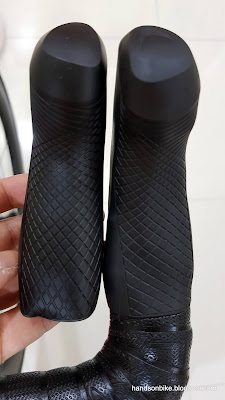 Comparing the shifters side by side. The hydraulic shifter on the right has a slightly bigger head, but the body size looks similar. 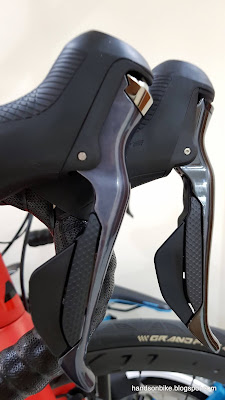 Similar curves on the brake lever, buttons and hood 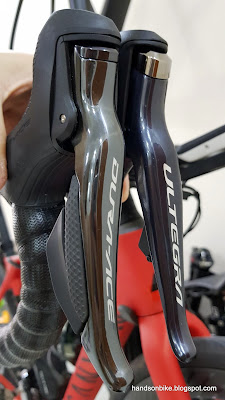 Appearance comparison from the front. As always, the Dura-Ace lever always looks much more glossy.

Once again, the Ultegra Di2 shifter has practically all of the functions of the Dura-Ace Di2 shifter, except that it weighs a bit more. If you can accept this, then the Ultegra shifters is a much better deal as it is much cheaper than the Dura-Ace shifters.
at August 30, 2018