The one new component that enabled me to switch from a belt drive system to a chain drive system is the rust resistant chain. Although higher grade chains such as Dura-Ace chains are pretty rust resistant, they will still rust when exposed to water often. On my Fabike C3 all-weather commuter bike, it will be used often on wet roads, so the chain will always get wet. I don't want to do frequent maintenance, so each component should be as weather proof as possible.
The KMC EPT chain is highly recommended by others for its rust resistant abilities. My friend told me that his KMC EPT chain has been used for 2 years, with no maintenance at all, and is still rust free. That is quite amazing, and 2 years is plenty of life for a chain. In fact, I would be happy to change a new chain yearly, if the chain does not rust at all during the 1 year period, with zero maintenance. 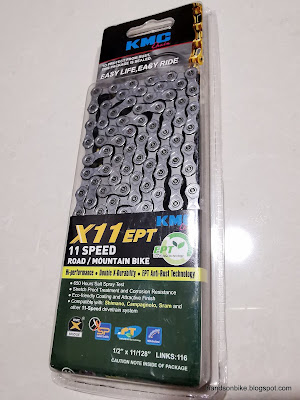 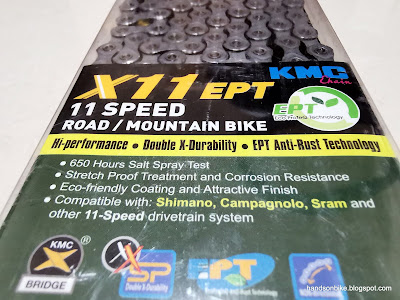 650 hours of salt spray test is amazing, as most other plated components would rust by 100 hours... 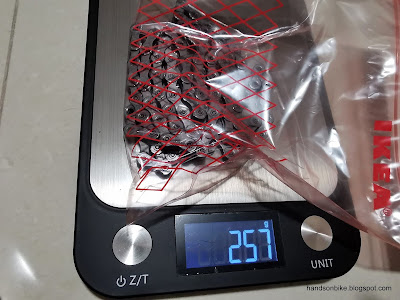 After the length has been determined, I weighed the actual chain weight to be 257 grams. 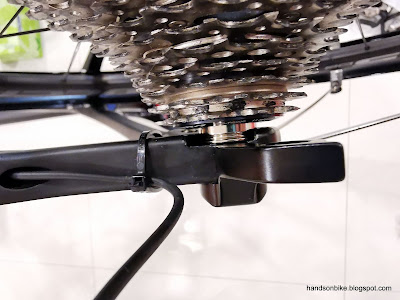 Installing the rear wheel with cassette to the Fabike C3 frame. Without the non-turn washers, the hub fits into the frame as it has a 142 mm OLD. 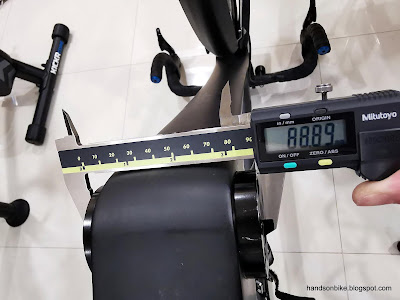 Bottom bracket width with the eccentric BB was measured to be about 89 mm.
Standard BB width with road bottom bracket should be about 90 mm, which is basically the sum of the frame (68 mm) plus two road bottom bracket adapters (11 mm each). However, since the actual width is smaller, the crank arm fixing bolt may bottom out on the left crank arm itself. There will be no bearing preload if the spindle is allowed to move laterally.
Therefore, I added two spindle washers of 0.5 mm each, one on each side. These washers are from the Wheels Manufacturing BB that I used on the Cervelo Aspero. 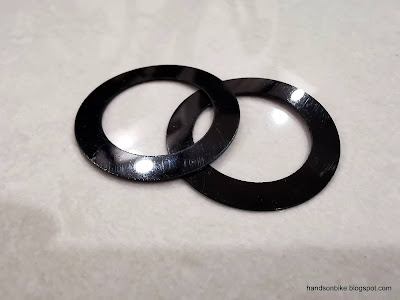 Spindle washers of 0.5 mm thickness each 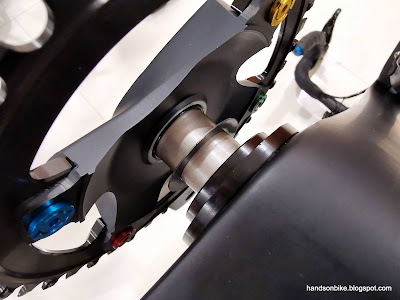 One washer on the right side... 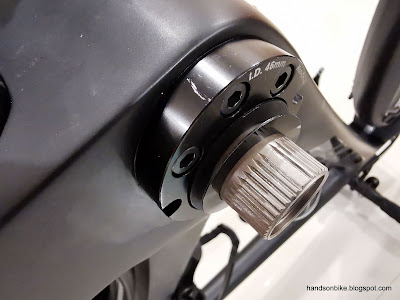 ...and one washer on the left side. 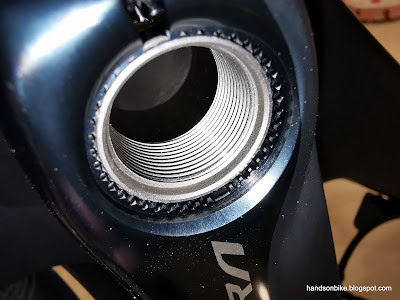 Correct spacing is achieved, and the spindle will not protrude from the splines of the crank arm. 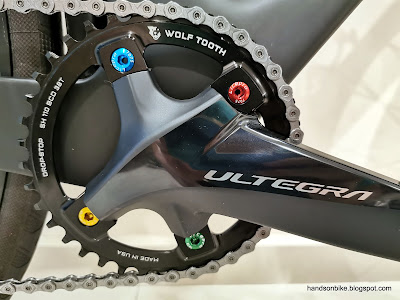 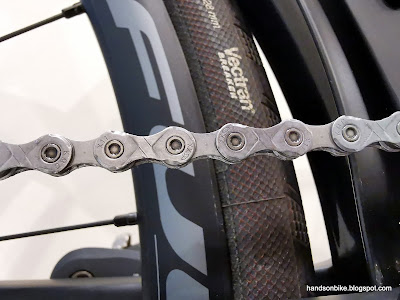 KMC X11 EPT chain. It has a dull appearance due to the corrosion resistant coating. 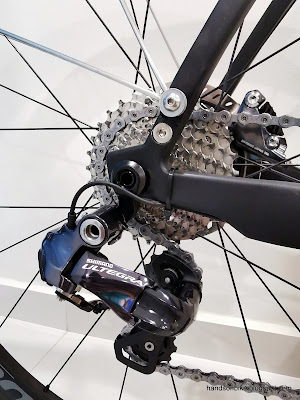 Putting on the modified Ultegra 6870 Di2 rear derailleur to try out this chain drive setup. 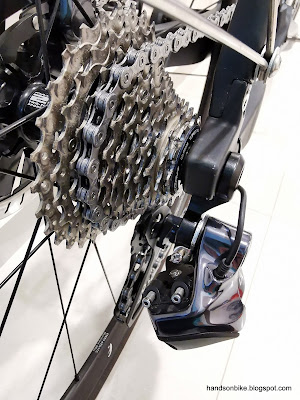 Converted to chain drive, with a conventional cassette, chain and rear derailleur. 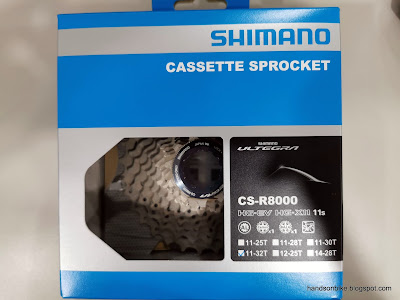 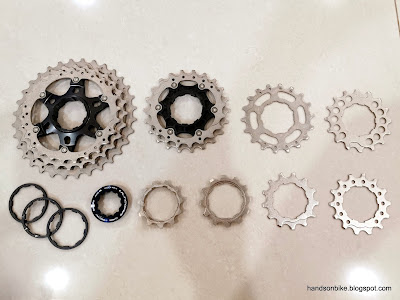 Disassembled view. There are two spiders for the largest 5 sprockets. For more cassette comparisons, check out this page. 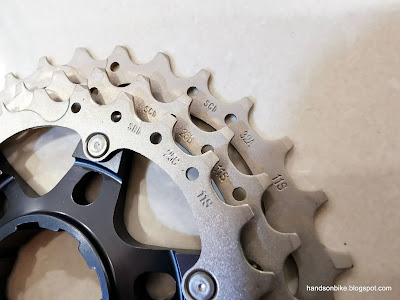 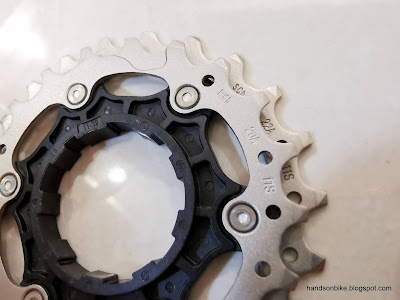 Next two sprockets (20-22T) are on a carbon fibre spider. 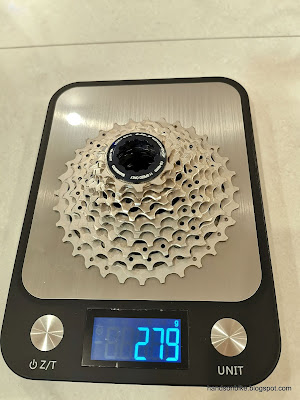 Weighs 279 grams, which is practically the same as the previous generation Ultegra 6800 11-32T cassette.
With this, the conversion from belt drive to chain drive is basically completed. Since the Fabike C3 was already on a Di2 setup, it was a simple matter of unplugging the Di2 wire from the Alfine 11 Di2 internal hub, and plugging into the Di2 rear derailleur instead. There was no need to change the shifter or anything on the handlebar setup.
Let's compare the gear ratio and gear range difference, between the previous Alfine 11 Di2 setup and the new Ultegra Di2 setup. Although both are 11 speed systems, gear range and gear ratios will be different, as the Alfine 11 has a wider range, but with bigger steps between the gears. 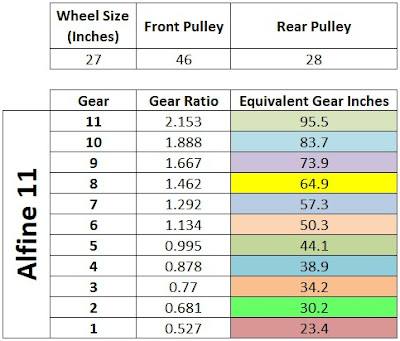 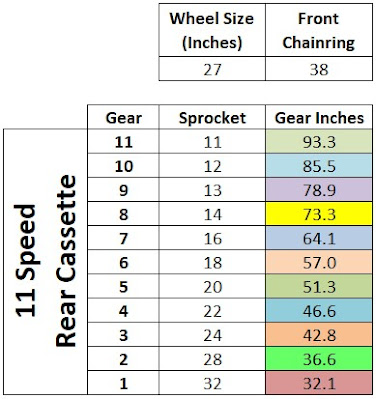 Ultegra Di2 with 11-32T cassette has a gear range of 291%, with a gear range of 32 - 93 gear inches.
The Alfine 11 has a really wide range, but as previously discussed, this wide range is not necessary for commuting, as I almost never use the highest gear or the lower few gears. Compared to the Alfine 11, the new setup has a similar top gear, but loses the bottom two gears. On the plus side, the gear steps are smaller, which is more ideal for road riding as a comfortable cadence can be achieved easily.
In the next post, I will show the rear wheel, which I have not discussed yet at this point. Also, the ride feeling will also be compared after some test rides.
at October 16, 2020