If you are looking for an inexpensive road 11 speed crankset, you can consider this Shimano non-series FC-RS510 crankset. Being non-series, it is a more budget friendly version that will cost less than the higher end 105, Ultegra or Dura-Ace versions. Tiagra is a 10 speed groupset so it will technically not be compatible to 11 speed drivetrains.
Some bike brands mix and match groupset components, in order to save some costs on the final full bike. For example, my Merida Scultura 5000 came with an Ultegra groupset, but it is not actually a full Ultegra groupset. The less conspicuous components such as the cassette and chain was 105 level, while the crankset was a non series RS500 crankset as well.
Let's see what are the main differences between a non-series crankset and those from a better groupset.
Appearance
As a non-series crankset, it cannot look better than one from a higher grade. Therefore, the design and surface finishing will be simpler. The second important reason is to reduce the cost of production, as a simpler surface treatment will be cheaper to produce, and also easier to produce in higher quantity. 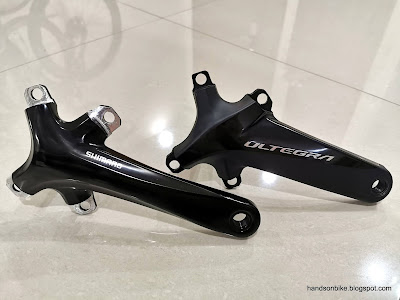 Plain black painting on the RS510 crank arm, while the Ultegra crank arm has two-tone anodising.
Construction
Higher end crank arms use the Hollowtech construction, with a hollow crank arm that saves weight over a solid or carved out crank arm. The hollow crank arm is made by either one piece forging, or by making two separate parts that are bonded together. Either one of these methods are a lot more expensive than just basic forging, found on the RS510 crankset.
Check out the other crank set comparisons here. 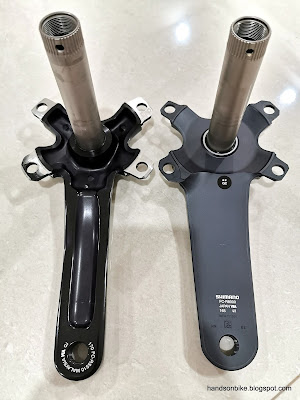 RS510 has a solid crank arm with the back carved out to save a bit of weight, while the Ultegra crank arm is hollow, made by bonding the front and back pieces together.
Weight
Finally, with the simpler appearance and construction, lastly comes the weight difference. The weight difference is a byproduct of the product design and manufacturing method, but it conveniently serves as a differentiation between different grades as well. The engineers do not purposely design it to be heavy, it just happens that a simpler construction is heavier in weight.
One of the key objective of having a hollow crank arm is to lower weight, as top level components need to have low weight in order to sell well. It may sound crude but it is true, all top level cyclists or serious enthusiasts are obsessed with reducing the weight on their bikes.
As for normal cyclists who place more emphasis on basic functionality and cost, a lower priced crankset translates to a lower priced bike, although it will be a bit heavier than a high end bike. 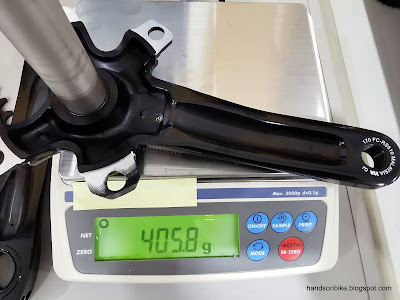 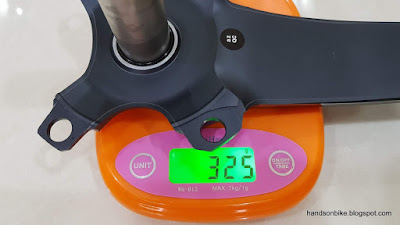 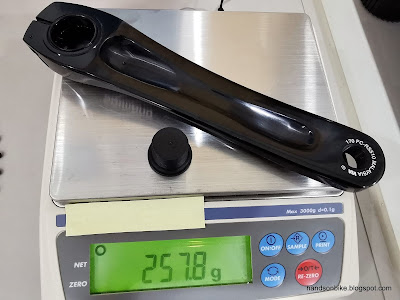 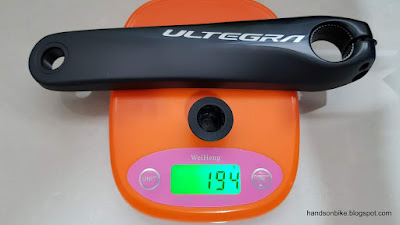 Ultegra R8000 left crank arm weighs 194 grams, about 64 grams lighter.
The weight difference of the crank arms is 145 grams, which is massive in terms of crankset weight. This does not include the weight difference of the chain rings, which I think might make the difference even bigger.
In summary, the simpler appearance and construction of the RS510 crankset results in a higher weight, which finally translates to lower cost for the non-series crankset.
Performance wise, the non-series crankset will probably work just as well, apart from the extra weight that it adds to the bicycle.
at March 13, 2021