After I got my new Avanti Inc 3 a few weeks ago, I have been preparing it for proper service. It is not that easy to get it ready, as it is not a normal bike. This was not helped by the fact that the internal hub gears were not adjusted properly. All the adjustments and crankset installations described below are done over several days as it is very time and energy consuming.

When I was testing the new bike after delivery, I found that there were only 10 selectable gears, instead of the 11 gears in the Alfine 11. I found that the shifter inner cable was not connected properly at the internal hub end, which caused one gear to be lost. Normally the internal hub gear indexing is done at gear 6 for Alfine 11, by ensuring that the yellow lines are aligned. However, I found that the yellow lines actually match up at gear 5! This means that the initial setting wasn't done properly. Re-adjusting the inner cable took a bit of time, but it was eventually set up properly at gear 6. 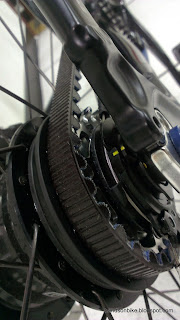 Yellow lines match at gear 6! For Alfine 11, this means that the gear indexing has been done correctly.

There was also an intermittent creaking of the bike whenever I pushed hard on the pedals. This could be due to many reasons. It could be the pedals itself, the pedal threads, the chainring bolts, the crankarm attachment to the BB, the BB in the eccentric BB unit, the eccentric BB in the frame bottom bracket shell, and so on. It was only solved after much tweaking, which will be described in the next blog post.

One thing which I didn't like about the bike was the crankset. The FSA Vero crankset looks pretty decent, but it is actually quite flexible under load. I found that just by stepping on the pedal when the crankarm is at the 6 o'clock position, I could feel the crankarm bending inwards. This was not acceptable for me, so I decided to get a better crankset for the bike.

The best crankset to match the Alfine 11 internal hub is of course the Alfine crankset. It is a single chainring Hollowtech II crankset, using the Hollowtech II BB. This system will definitely be stiffer than the ISIS system used by the FSA Vero (at least it wasn't using square taper BB). 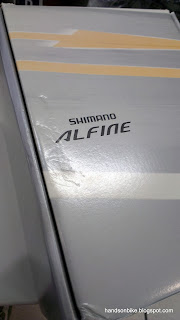 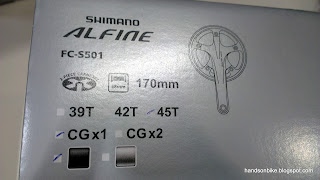 Black colour spec with 45T chainring. I will actually only require the crankarms as I am using the Gates belt drive front pulley.

Removing the existing crankarms and pedals are always a pain, and those who do their own bike maintenance will know how troublesome it is. The pedals came off rather easily, which was quite surprising. Next, the crankarms came off only with much effort, even though I used the proper crankarm extractor tool to pry the crankarms off the BB spindle.

After that, the ISIS BB itself needs to be removed from the eccentric BB. This required the BB tool plus a long leverage pipe to remove the BB. Again, it took quite a bit of effort to get it off.

Sorry that I don't have any pictures of all these, as my hands were pretty much covered in grease throughout these operations.

Next, the Hollowtech II BB (105 BB from previous crankset) was installed onto the bike. I had initially planned to extract the eccentric BB from the frame to take a look, but it was stuck really tightly. The pin spanner that I had got to turn the eccentric BB did not fit at all, thus it could not be used. 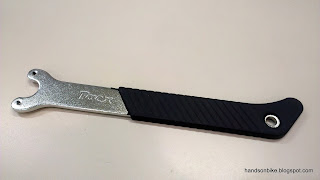 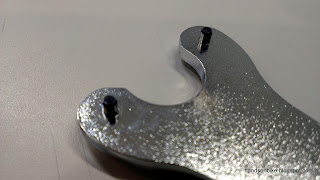 The two pins are supposed to go into 2 holes on the eccentric BB, allowing you to rotate the eccentric BB in the frame. But it does not fit anywhere and cannot be used at all.

Finally, I could install the Alfine crankset! However, as soon as I put the crankset spindle through the BB, I realised that I had a big problem. The other end of the spindle that sticks out from the left side was too short! There was no way I could tighten the left crankarm onto the short length of spindle that was sticking out. I could not even screw in the left hand crank cap as it was too far out to engage the thread in the spindle.

After some investigation, I found that the BB shell width on the Avanti (eccentric BB) was 73mm! I had assumed that it was 68mm, since it came with a 5-arm crankset which is typical for a road crankset. Road cranksets normally use a standard 68mm bottom bracket width, which would have accepted the Alfine crankset without any problems. This meant that I was 5mm short in spindle length.

At this point, I was stuck. There was no way I could continue to use the Alfine crankset as the spindle is too short. No way to fit a crankset meant for a 68mm BB width onto a BB of 73mm width. I had two options: To reinstall the FSA Vero crankset, or to get a MTB crankset (with longer spindle). Using a MTB crankset would require getting a 4-arm Gates front pulley, which adds on to the cost. I decided to put everything on hold and think about it.

The graphics below show the approximate measurements for a few crankset and BB setups. It will help you to understand the differences and how I eventually managed to solve the issue. 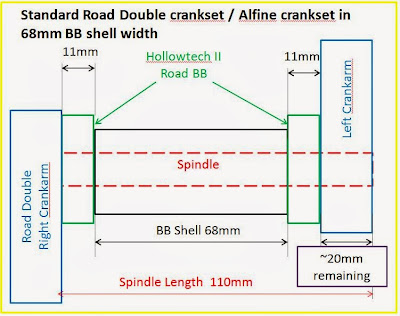 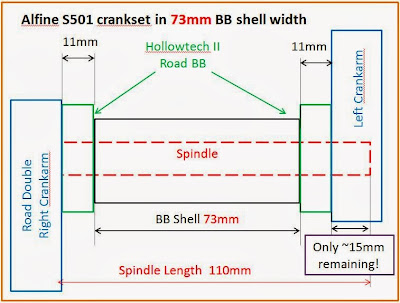 This turned out to be the actual case for the Avanti Inc 3. I attempted to fit a 110mm spindle through a 73mm BB shell, which gave me only 15mm remaining at the left side. This was due to the BB shell which was 5mm wider (73mm vs 68mm).

Through some research, I found that the difference between a road Hollowtech II BB and a MTB Hollowtech II BB is actually the width of the BB cups. The MTB BB cups are actually about 1mm narrower on each side! I also knew that a road triple crankset has a longer spindle, to accomodate the larger chainline required for a triple chainring setup. I realised that by combining these two features, I could actually make it work! 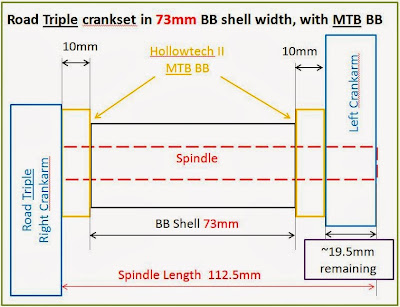 This was the final solution which I thought of. I found a road triple crankset, and measured the spindle length to be 112.5mm, which is 2.5mm longer than the road double or Alfine crankset. I also used a MTB BB, which have BB cups of 10mm wide on each side, instead of the 11mm of a road BB. Together, I managed to get an extra 2.5+1+1 = 4.5mm of spindle length on the left side! This is almost the same as the required 20mm, which means that I did not have to reinstall the FSA crankset or to use a MTB crankset (which will greatly affect the chainline). 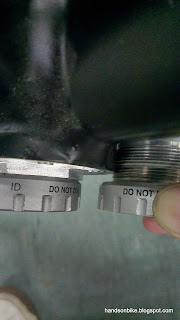 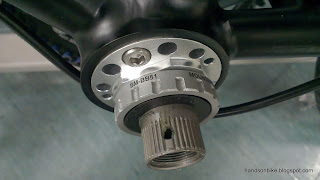 Using the MTB BB, together with the road triple crankset, there is sufficient spindle length on the left side for proper fixing of the left crankarm. 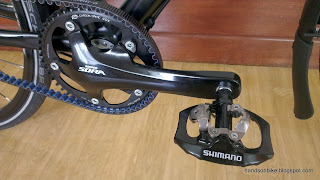 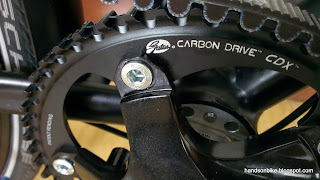 For optimum chainline, the front pulley needs to be installed on the inside of the crankarms.

At this point, the crankarm has finally been installed successfully, but other problems have surfaced. Somehow the belt tension has decreased after I removed and installed the new crankset. Also, the creaking sound is still present. Seems that I have no choice but to try adjusting the eccentric BB, both to increase the belt tension and to also eliminate the creaking sound. This will be continued in the next blog post! 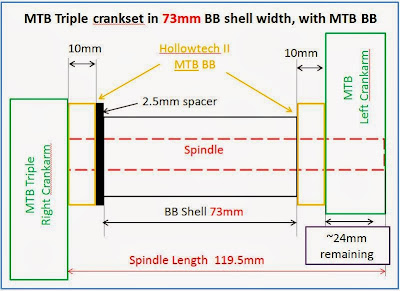 A MTB crankset spindle is much longer than a road crankset, to allow it to pass through the wider BB shell, and also to have a more secure attachment to the left crankarm (24mm, more than 20mm for road).