On the Merida Scultura 5000, I have mounted the Garmin Edge 510 cycle computer using the supplied plastic out front mount. Together with the K-Edge Go Big GoPro handlebar mount, I am able to fit both the Garmin and the Shimano Sport Camera on the handlebar.

Although it fits, it looks really crowded, with the devices taking up a lot of the space. As a road bike, I would prefer it to be less cluttered, but I find it hard to dispense with either the Garmin or the camera. 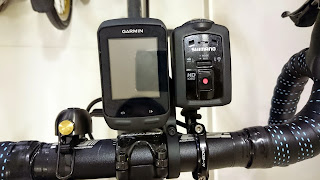 Both the Garmin and the Shimano Sport Camera fits, but it is very crowded. 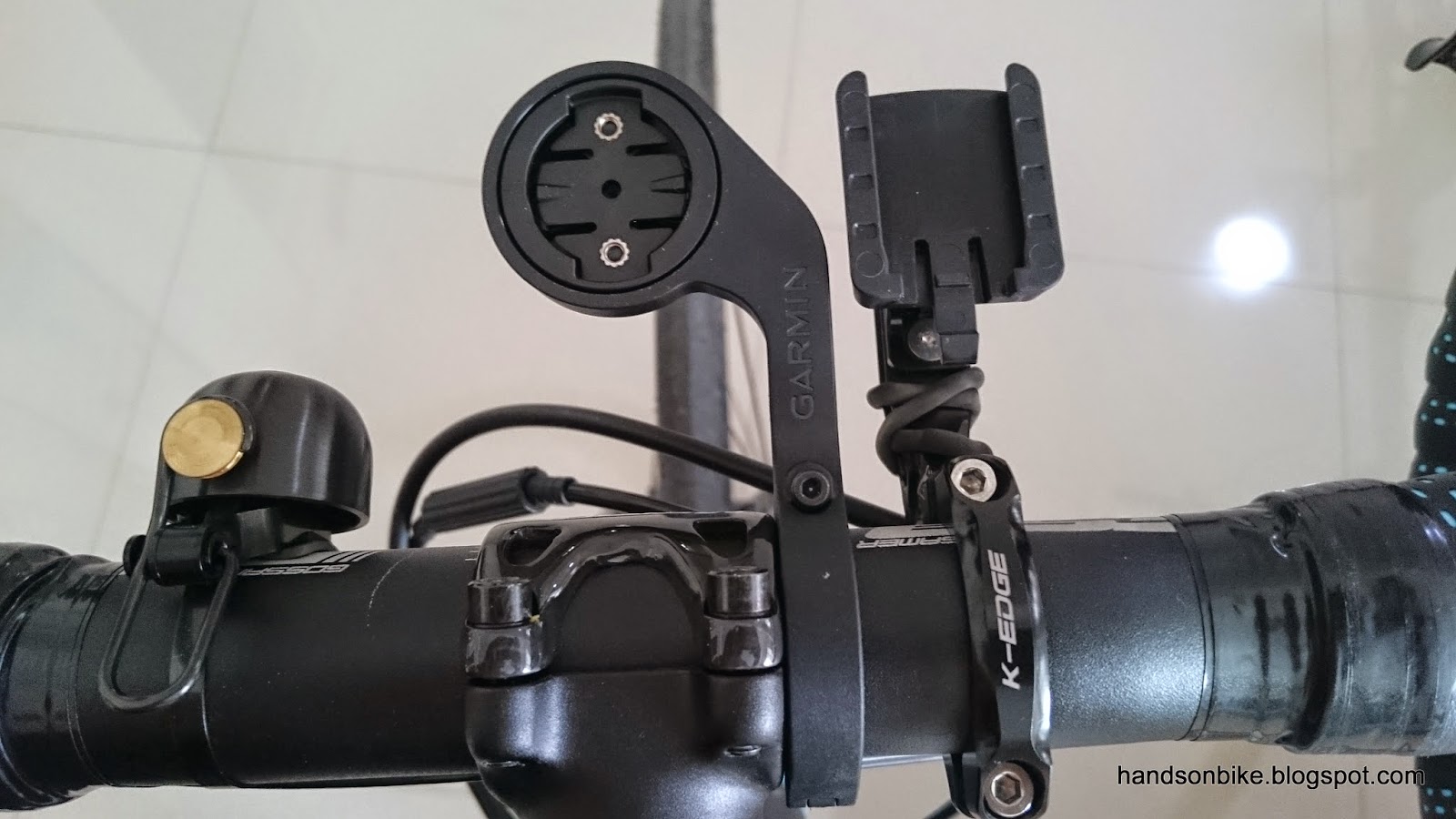 Is there a way to reduce the number of clamps on the handlebar?

I found that there is actually a combo Garmin + camera mount available, made by K-Edge. As K-Edge products are expensive, this time I tried to find a similar one on Taobao, but there was no similar combo mount available. Also, a camera mount needs to be made of metal for better video quality, as plastic mounts tend to vibrate too much, resulting in a shaky video.

In the end, I decided to contribute to the revenue of the K-Edge company, and bought the K-Edge Aero Garmin and Camera Combo mount. Hopefully this will tidy up the handlebar area of the road bike! 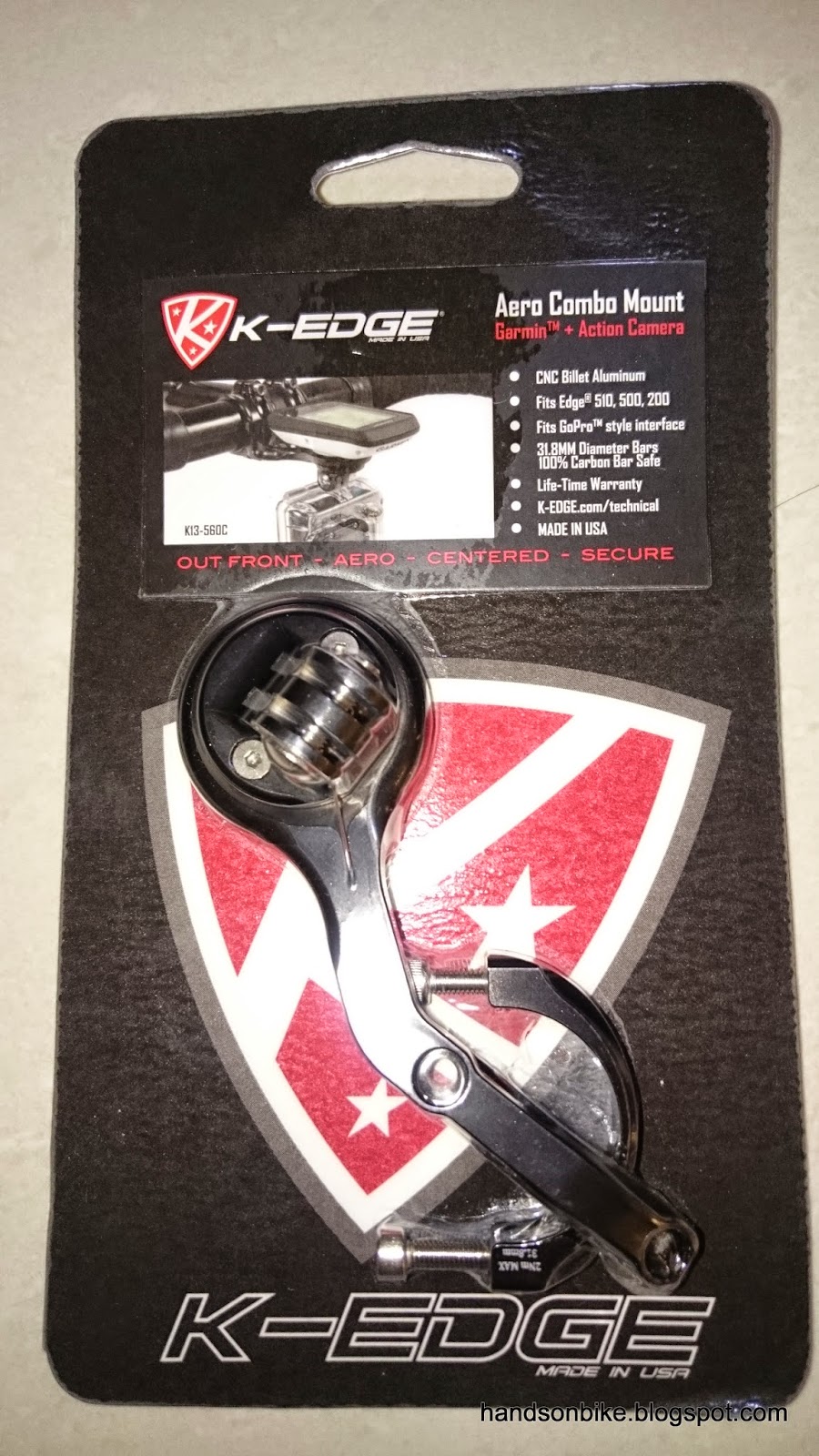 K-Edge Aero Garmin and Camera Combo Mount. However, I am not too concerned about whether it is aero or not.. 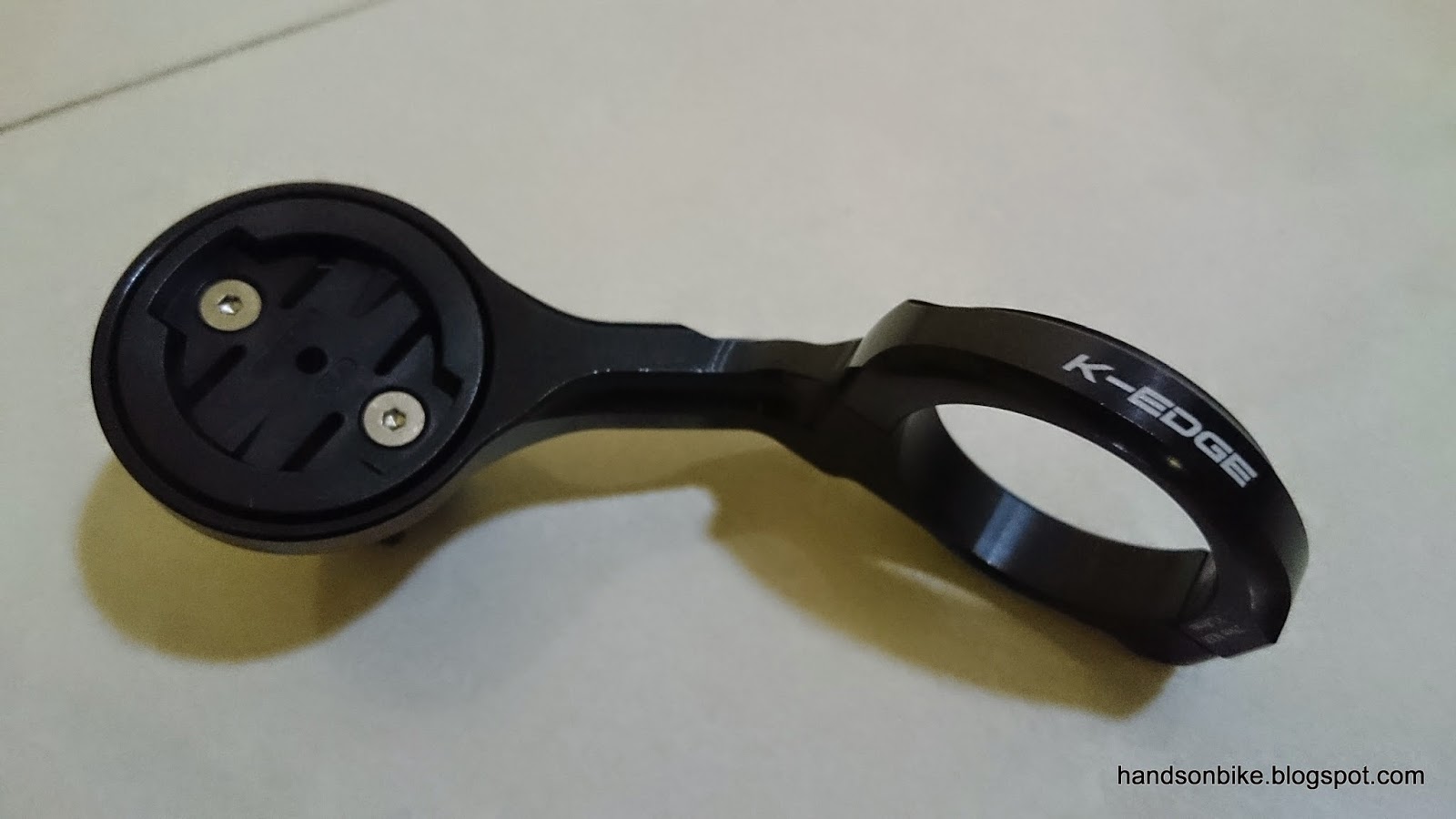 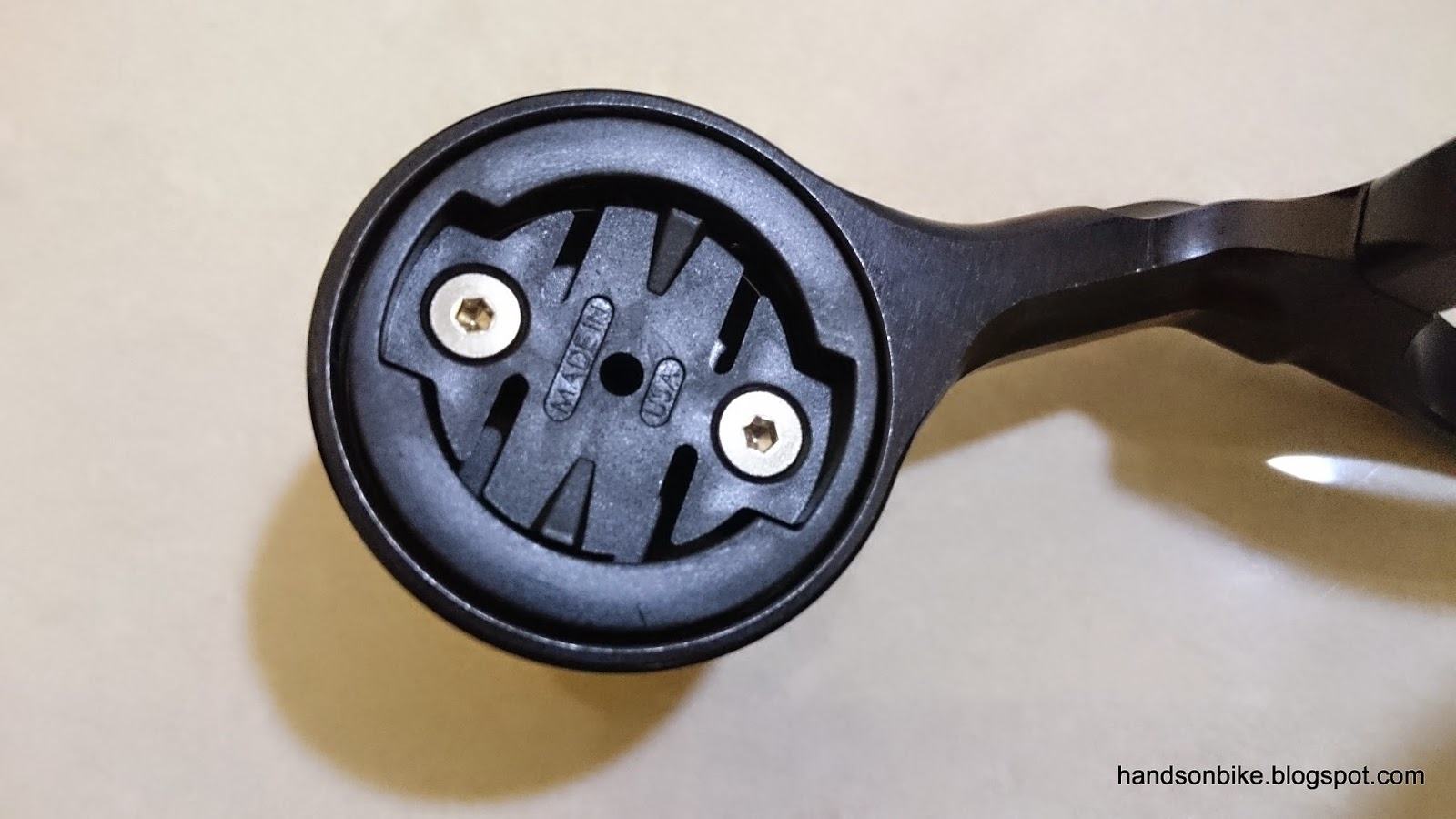 Plastic insert for the Garmin. The mount is made of plastic to avoid damaging the plastic back cover of the Garmin computer unit. 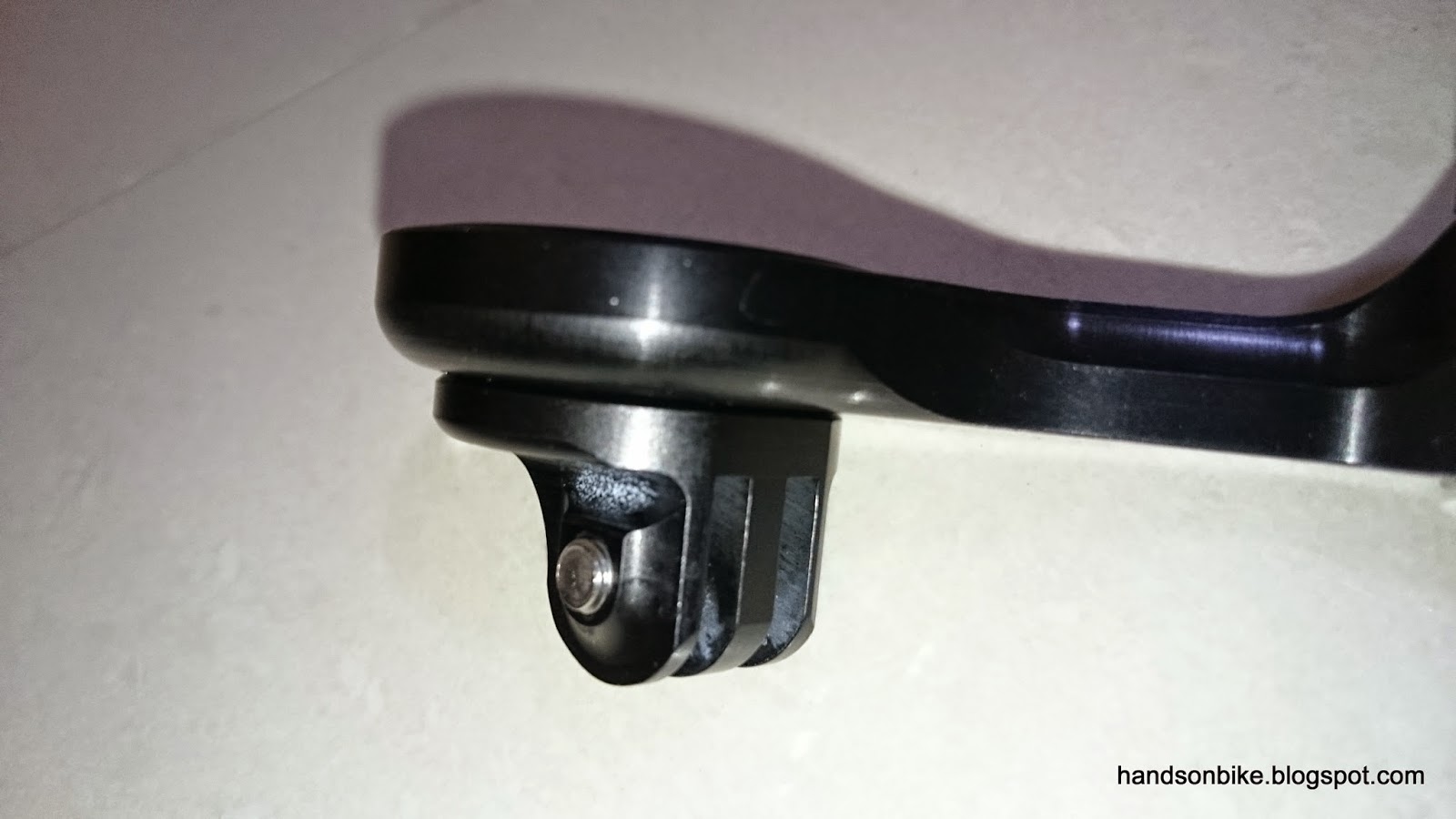 GoPro style of mounting at the bottom 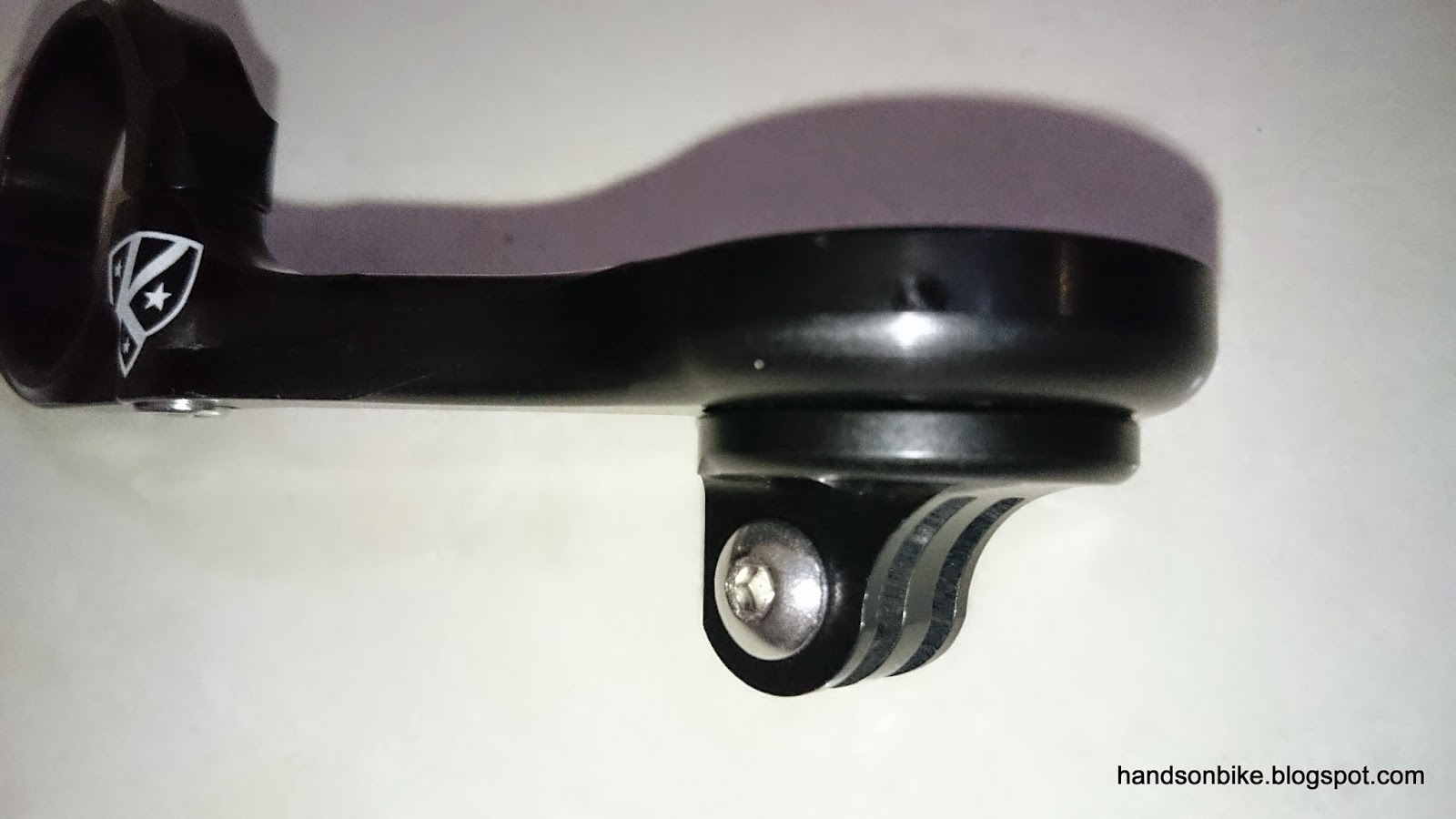 You can use a bolt or a knob to tighten the mount. I prefer to use a bolt as it is smaller and more secure, although it cannot be adjusted as easily without an Allen key. 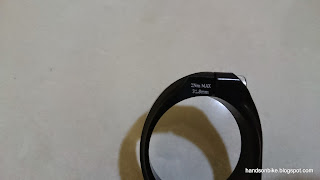 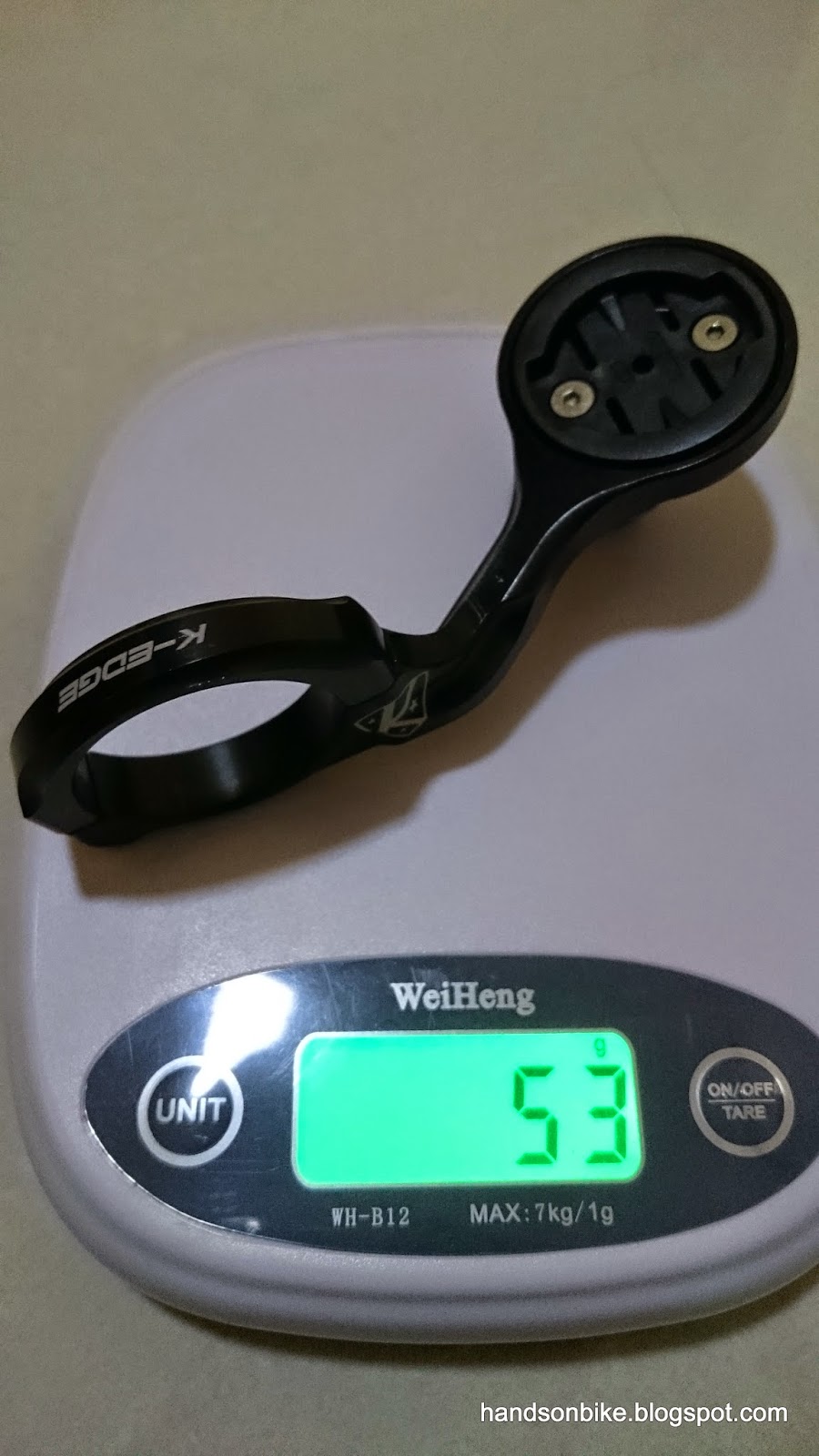 Adds 53 grams to the bike, but this replaces 2 mounts and so it is actually a good deal. 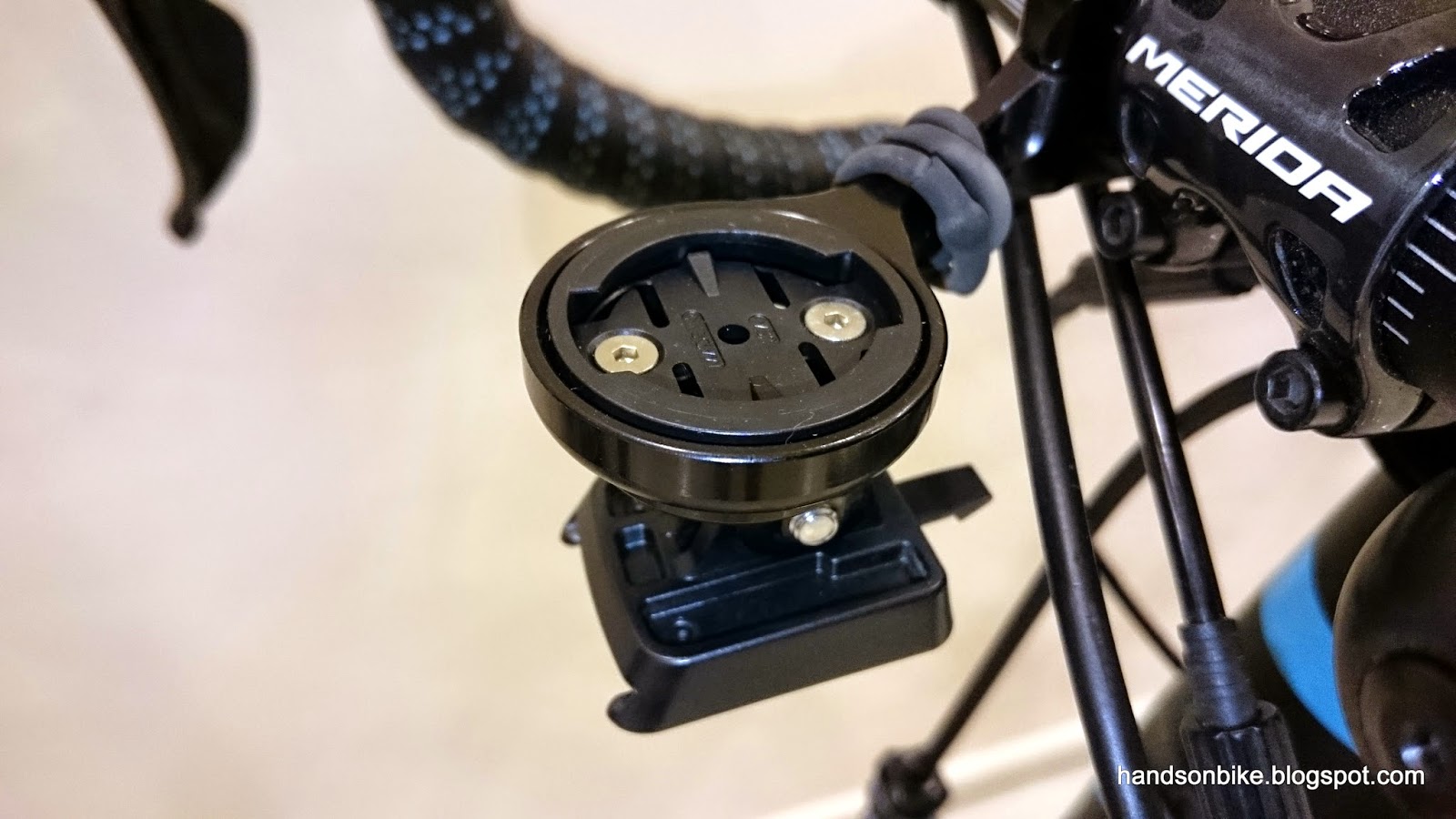 Garmin mount on top, Shimano camera mount at the bottom 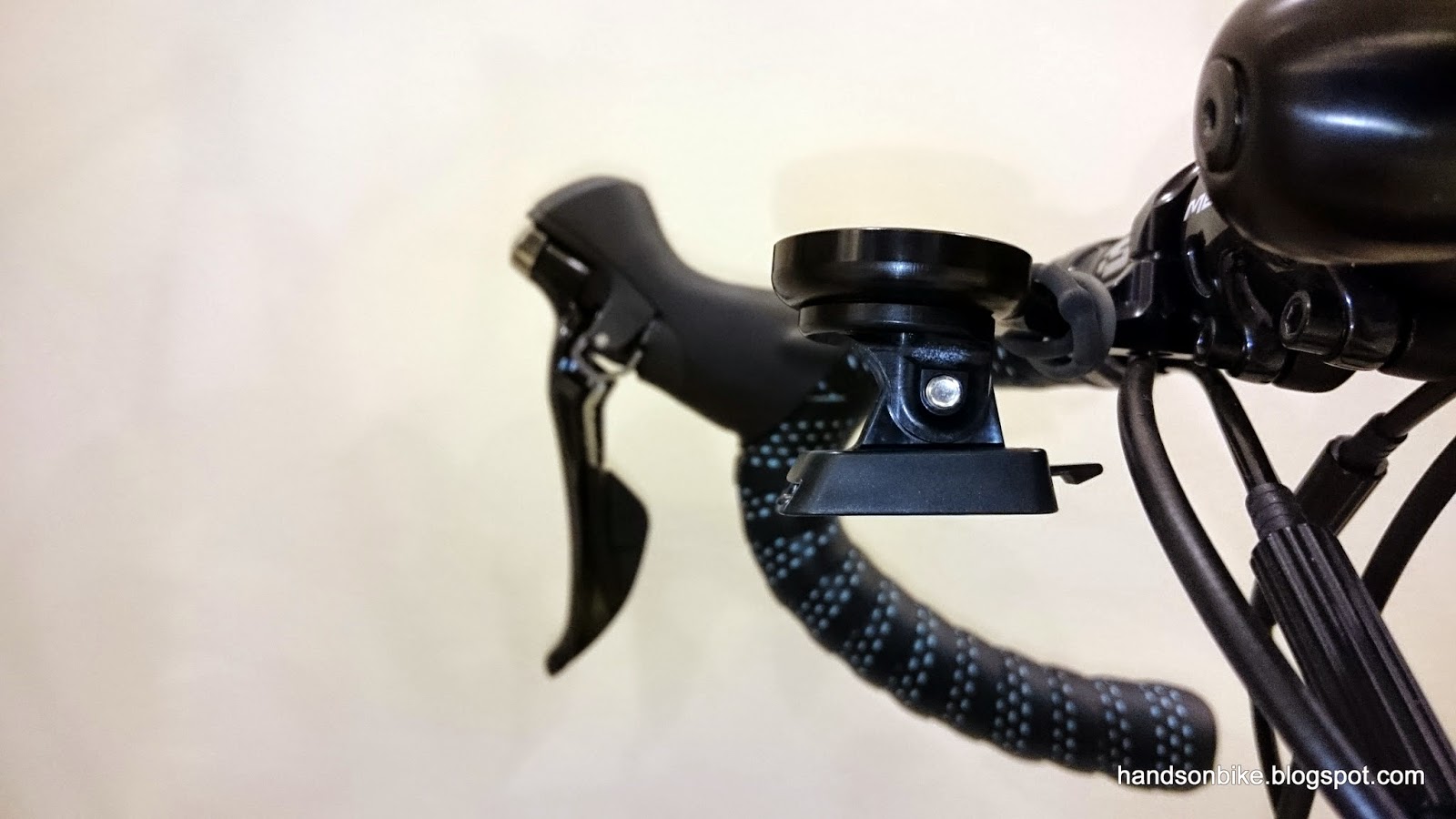 Side view of the combo mount. Quick release mount for the Shimano camera. 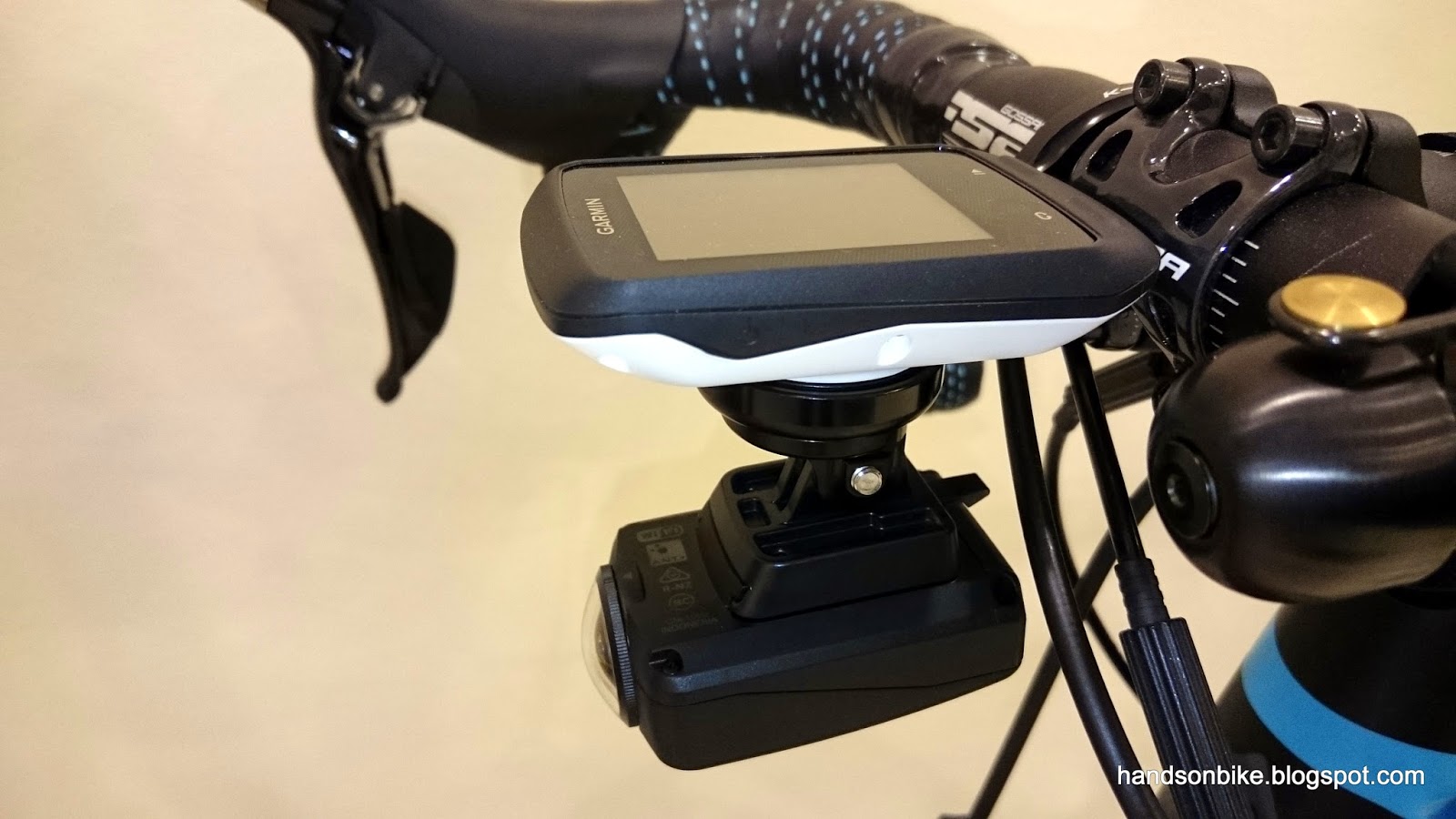 With both the Garmin and the Shimano camera mounted on the K-Edge mount. 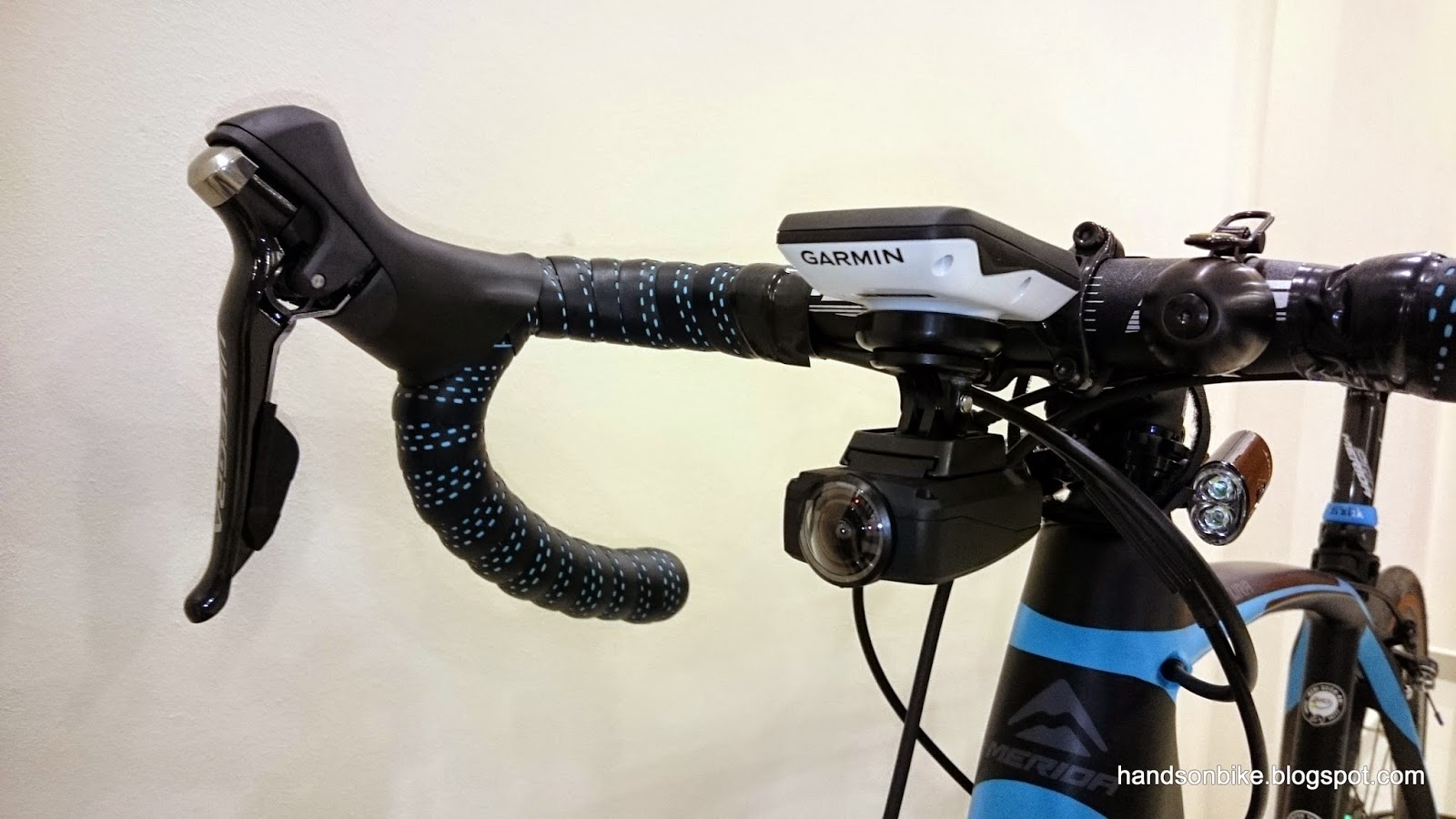 Front view of the setup. The Shimano camera hangs below the Garmin, just in front of the cables. Does not block the front lights that are mounted on the stem spacers. 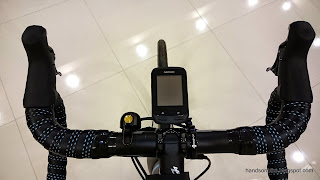 Best seen from the top view. Very much neater than the previous set up!

What I like most about this new mount and setup is that from the rider's point of view, the handlebar area is much neater. The Shimano camera is nicely hidden under the Garmin, out of sight and out of the way, but still very much functional.

Although the Shimano camera is mounted upside down, it will auto rotate to the right side up as it has an angle free feature. I am also unable to see the indicator LEDs on the camera, but it is still OK as I can hear the beeping sounds that indicate the start and end of the video recording.

This combo mount is highly recommended for those who have both a Garmin and a GoPro/Shimano camera on the bike, as it greatly improves the tidiness of the handlebar area. Although it is pricey, it should not be an issue if you can already afford both a Garmin and a camera on your bike.
at May 30, 2015