For this new 1x12 speed drivetrain on the Fnhon folding bike, a new chain ring is required, because of the new Flattop chain used. As shown in detail in the chain comparison post, the Flattop chain has larger rollers, which do not fit onto existing chain rings.
Since I am getting a new chain ring, this is a good chance to adjust the gear ratios that I want. Previously I was using the 48T Wolf Tooth chain ring together with a 11-32T cassette. The gear ratio was a bit too high for my usage, but I did not change the chain ring then, as it was not critical. The lowest gear of 33 gear inches is not quite low enough for steeper slopes. 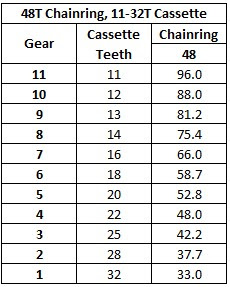 Previous gear ratios on the 11 speed drivetrain, with 48T chain ring and 11-32T cassette.
I would have preferred to shift the gear range down a bit, as I rarely use the highest gear of 96 gear inches. In fact, even on my Focus Paralane road bike, with a similar top gear of 98 gear inches, this top gear is hardly used except when going downslope.
This time, I decided to get a new 44T chain ring, to go with the new Force 10-36T cassette. 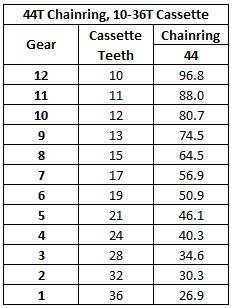 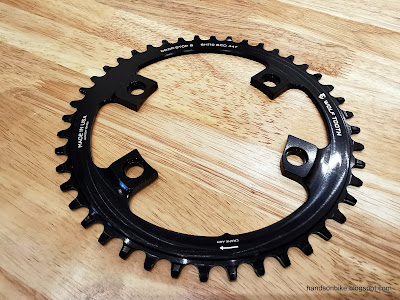 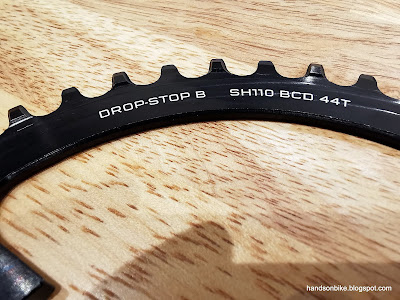 Drop Stop B teeth profile is compatible with Flattop chains. This chain ring can be installed on Shimano 4 arm road cranksets, with 110 mm BCD. 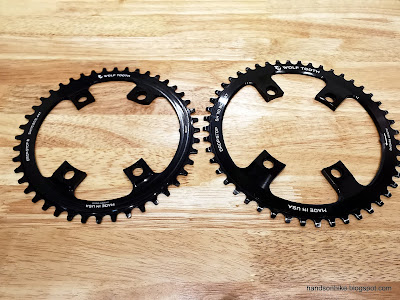 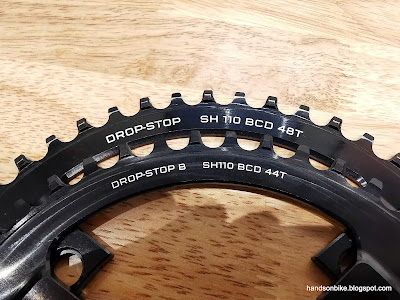 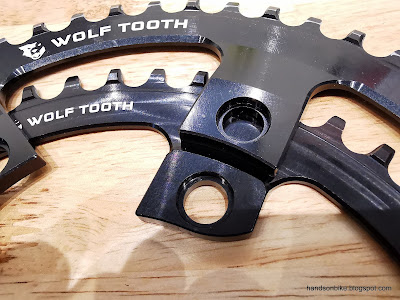 The new chain rings come with an additional cutout, to match with newer Shimano crank arms. Older chain rings don't have this cutout, so I needed to cut it manually. 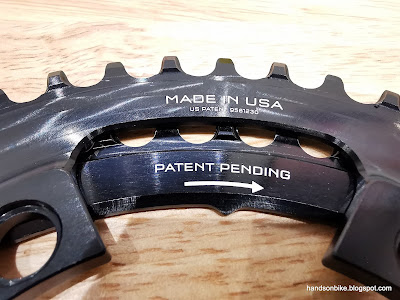 Previously it was patent pending, now the patent has been granted. 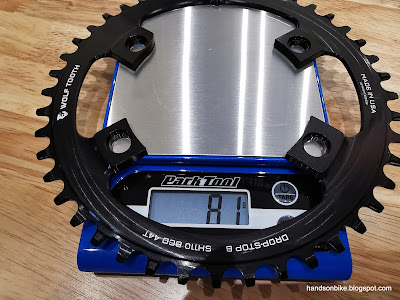 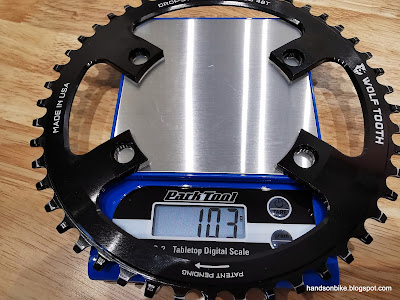 Old 48T chain ring is 103 grams.
For a front single drivetrain, it is important to set the gear range properly, so that all the gears can realistically be used. During climbing, the low gears should be low enough. During sprinting or descending, the high gears should be high enough. There will be some compromises compared to a front double drivetrain, but generally a front single gives sufficient gear range for folding bikes.
One of the most common mistake people make when selecting their chain ring size, is to have a chain ring that is too big for their usage. Many use 52T, 54T, or even up to 60T. On a 451 wheel, these correspond to quite high gear ratios that are rarely used. However, they still use large chain rings, as they mistakenly believe that a large chain ring allow them to go faster without additional effort, without considering that you need strong legs to push high gears.
At the same time, these people struggle up slopes, as the large chain ring means that the low gear is not easy enough. Therefore, the chain ring size selection is very important, to ensure that you can maximize the gear usage across the whole cassette.
When I use my folding bikes, I mainly ride casually for leisure, so I don't need high gears for sprinting. On downslopes, if I run out of gears, I just let the bike roll freely. What is important is that I always have a sufficiently low gear for climbing, and this is done by choosing chain rings that are not too big.
Therefore, the 44T chain ring that I chose is carefully selected after calculations, to make sure that the top gear is not so high that I can't use it. More lower gears are always better for climbing!
at January 13, 2022