Part 7: Cheap Bikes vs Premium Bikes: What is the Difference?

Before I continue with the article, I would like to thank all my readers, some of whom have given me valuable feedback and compliments. Without all your continued support and encouragement, I would not have found the inspiration and drive to write all these articles on my blog. Thank you!

The Drivetrain! It is the heart of the bicycle, without which the bicycle is just a Flintstone-style vehicle. The drivetrain is the system that transmits the power from the rider to the bicycle, powering you forward. A good drivetrain will be very efficient, using almost 100% of the rider's input to drive the bicycle forward. It is not possible to be 100% efficient, because energy losses are unavoidable. However, we can try to minimise the energy loss with good engineering. Let us first take a look at what the drivetrain of the modern bicycle consists of.

Now for the comparison! I don't have complete information on the Aleoca R2R's drivetrain, so I will give it my best shot at guessing the parts, and give it the benefit of the doubt. Hope it does not affect the credibility of the comparison too much!

Bottom Bracket (BB)
The bottom bracket, also commonly known as the BB, is the core of the drivetrain. For the square taper BB used for both the Aleoca R2R and the Dahon MuP8, the BB has bearings at either end of the BB, together with the square taper axle.

The square taper BB has been around for a long time, and is still very commonly used nowadays. It is also cheap, and nowadays people don't service square taper BB's. When it wears out, it is much easier to just change out the BB.

The BB screws into the bottom bracket shell on the frame of the bike. Point to take note is the direction of the screw thread used. To loosen the BB from the frame, the BB cups have to be turned in the pedalling direction. This helps to prevent the BB cups from tightening further during pedalling, which will make it impossible to remove in the future. The BB cups will have a left-hand thread on the right side, and right-hand thread on the left side. Confusing? 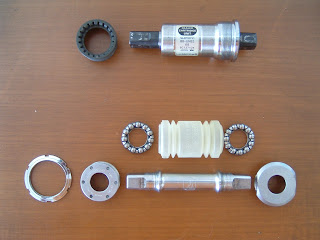 Cartridge-type BB on top, Loose bearing type at the bottom. Note the difference in the number of parts!

The excellent picture above shows the difference between a cartridge-type BB and a loose bearing BB. The cartridge-type is non-serviceable, you just replace the whole unit when it is broken.

Both the BB's are square taper BB. When mounted on the bike you cannot really tell the difference. The difference is in the construction. The Aleoca R2R uses an older type of square taper BB, with loose bearings (kept together with a ball bearing retainer) that can be serviced. This is the same stock BB used on the Dahon Vitesse D7. The disadvantage is that it is not as well sealed against dirt and water as the sealed bearing type. Since BBs are rarely serviced nowadays, there is hardly any advantage to be able to service the bearings. Just change the BB!

The Dahon MuP8's square taper BB is the newer type, with sealed bearings that come from the factory almost fully assembled. You just need to screw in the cartridge from the right side, and then insert the left side BB cup. Cartridge type refers to the construction, where the BB comes as a cartridge that you can just change out as a single unit. This type of BB is better sealed against the elements, thus it should be more durable.

Comparing these 2 BB's, there is frankly not much difference here. Cost savings are made here since it cannot be seen by the user anyway. Performance wise there isn't much that can go wrong here, even cheap BB's will perform decently.

Cranks
The cranks link the pedal to the chainring, which in turn pulls the chain and drive the rear wheel. To be efficient, the cranks have to be very stiff to endure the high forces that the rider exerts on the drivetrain. The ultimate crank would be super stiff and ultra lightweight. Carbon cranks come close, but at a high price! Nowadays, cranks are mostly made out of aluminium, because it is relatively lightweight and strong. 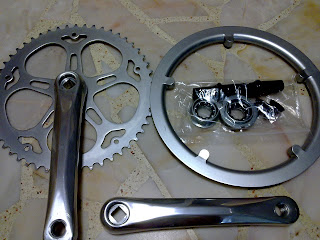 Cranks that come attached with chainring. Similar to the type found on Aleoca R2R. 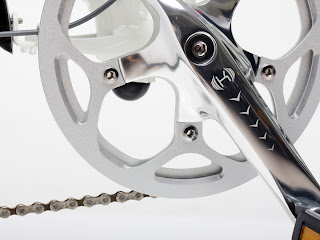 Aluminium cranks are always cold-forged for strength, which is especially important for cranks. It would be very "exciting" and dangerous if your crank were to snap while pedalling hard!

The main difference here is the way in which the chainring attaches to the right-side crank. For the Aleoca R2R crank, the chainring is permanently press-fitted onto the crank with a splined interface. Good system, just that you cannot change out your chainring if it wears out or if you want a chainring with different number of teeth.

The Kinetix Supra crank uses the 5-bolt mounting with 130mm bolt circle diameter (BCD). This is a pretty standard mounting for most road bike cranksets nowadays, which means that you are free to change your chainring as you please. What stands out here is the polished surface finish of the Kinetix Supra crank! Really beautiful finish that greatly elevates the aesthetic value of the cranks.

Chainring
The chainring drives the chain, and by varying the number of teeth on the chainring, you can alter your gear ratio. Some strong riders like to change their chainring from the standard 52T chainring to a larger 56T or even 60T chainring to compensate for the smaller wheel size of the 20" bikes. Since there is no front shifting for these two bikes, there is no need to get highly engineered chainrings (with ramps and pins and profiled gear teeth for optimum front shifting) used for bikes with double or triple chainrings. 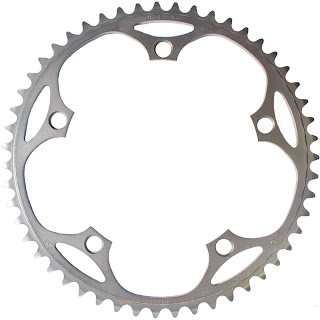 Main difference here is the material! A steel chainring is very durable, but it is heavy and may be prone to rust after some time. Aluminium chainrings are the norm nowadays, being light and strong. A chainring can always be replaced if it wears out, which is possible only if the standard 5-bolt mounting, such as those found on the Kinetix Supra crank is used.

Chain
Not much to compare here, pretty standard chains used for the bikes! A nicer chain would usually be nickel or chrome plated for better appearance and corrosion resistance. The most important aspect is not the surface finish of the chain, but how you take care of the chain. As long as you remember to clean and lubricate the chain regularly, even the dull looking cheap chains will run nice and smooth. 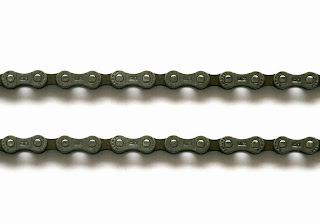 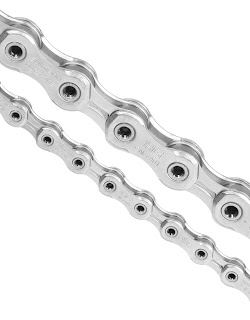 In the previous post of the bike comparision article, which is Part 6: Gear Shifting System, I mentioned that the recommended chain for an 8 speed system should be an 8 speed chain. (6,7,8 speed chains are the same). However, you can also use a 9 speed chain on an 8 speed system with not much of a problem. Being narrower, the 9 speed chain should run quieter, as it is less likely to rub on adjacent sprockets, especially when cross-chaining. The compromise here is the gear shifting, where it might be hesitant to downshift (change to lower gear), as the chain is narrower and will not climb as well onto the larger sprockets. But it is usually not a big issue. Just don't use an 8 speed chain on a 9 speed drivetrain, as the wider 8 speed chain will be too wide to fit properly on the narrower 9 speed sprockets!

Cassette Sprockets
In the previous part, the cassette sprockets were discussed when the gear shifting systems were compared. The sprockets are also part of the drivetrain, as the sprockets drive the freehub, which then turn the rear wheel. This will not be discussed further as it has already been compared in Part 6: Gear Shifting System. 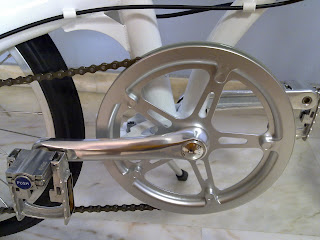 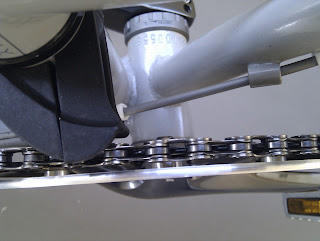 Black chainguard and edge of bashguard shown. Together, they prevent chaindrop. 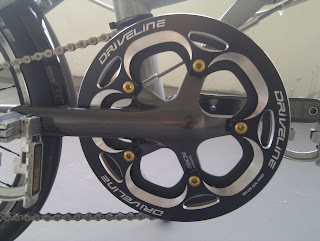 The very stylish bashguard that was on my Boardwalk! It has since been removed as I have added a front derailleur (FD), and the FD will prevent chaindrop.

An alloy bashguard would be more durable and resistant to damage compared to plastic bashguards. But performance wise, there is no difference here. It does not contribute to drivetrain efficiency, although it may improve the appearance!

Comparing the drivetrains, the significant differences are the cranks and also the chainring. Other than that, the other components are quite similar. I would have expected the Dahon MuP8 to have a better BB, such as a Shimano Octalink BB (stiffer and more efficient). However, this would mean upgrading the crankset too, which I guess is not possible if they need to keep the production costs down.

You can read the other parts of the article at the links below!

In the next and last part of this article, other less well-defined aspects of the bikes will be discussed and compared. Examples would be the folding joints that are used on the bike, and the Pre-Delivery Inspection (PDI) conducted by the bike shop before selling the bike to the consumer.