In Singapore, the roads are usually pretty well lighted at night. The street lighting is usually bright enough for you to identify objects on the road and avoid obstacles such as potholes and other things on the road while cycling. Because of this, a front blinker is usually enough for night cycling. The blinker will be bright enough to alert other road users to your presence, but will not be enough to light up your path. 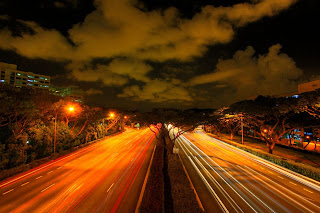 However, there will be times where a front blinker is not enough! Sometimes you will need a more high-powered front light to actually light up the road. Examples will be when the streetlights are out, which is encountered quite often on Tuas night rides. Or during night cycling trips that bring you to ulu places such as Neo Tiew road. The most recent one was on the night visit to the newly-opened Punggol Waterfront PCN. Although it is mostly lighted, there are some stretches where the lighting was not installed yet. It can be quite dangerous to ride without being able to see the road in front clearly.

At those rides, I had an Innovity 3W front light, which is actually pretty bright, with a decent spread and runs on 3xAAA batteries. However, one major issue is that the battery life is quite short, about 4 hrs before the light intensity drops drastically. You can see the Innovity light here at the Minoura Space Grip review.

I decided to source for a more powerful front light that will light up my path when the street lighting is not bright enough. This front light will work in conjuction with my S-Sun 1W blinker.

My criteria for a front light:
1) Bright enough to light up a pitch dark road
2) Powered by rechargeable batteries
3) Mounted as a single unit (unlike most high powered lights that come with an external battery pack connected by a wire)
4) Not too pricey!

After asking around, the Busch & Muller IXON IQ  Front Light was recommended. The most important feature for me is that it is installed as a single unit, without a dangling wire that connects to an external battery pack. The B&M IXON IQ light has the batteries integrated within the light itself. 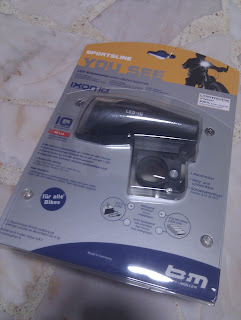 Nice packaging for the lights! 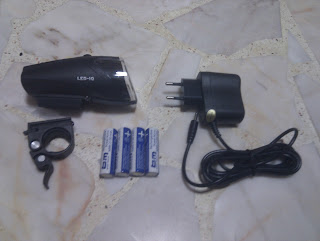 Comes with 4 rechargeable AA batteries and a power adaptor for charging. 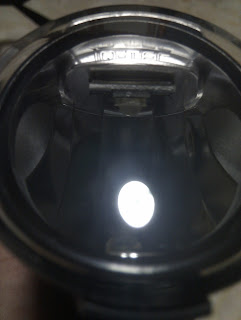 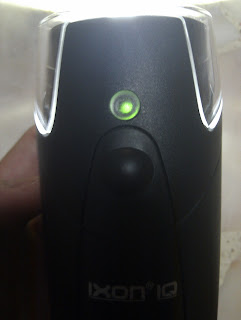 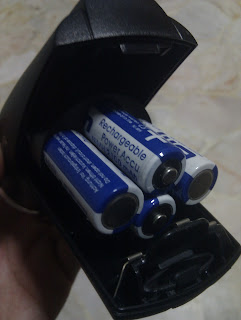 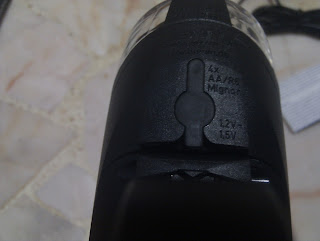 Connector at bottom of light. Plug in the supplied AC adaptor to charge the batteries inside the light.

The coolest thing about this light is that the charging circuit for the AA batteries is already integrated into the light! To charge the light, just remove the light from the clamp and plug the AC adaptor into it. Or you can just plug in the adaptor with the light still mounted on the bike. No need to take out the batteries at all, very convenient!

Also, since it uses standard batteries, you can always bring along extra AA batteries for overseas trips, where you can't charge the batteries. This light costs $100+ SGD, excluding shipping. Not cheap, but well worth the money for the bright light it generates!

The light has 2 lighting modes, bright and super bright! No flashing mode, as a flashing front light is illegal in Germany (where this light is made). To switch on the light, hold the button for 1 sec. To switch between modes just press the switch without holding it down.

High Power: 40 lux. WOW is the only word to describe it. Can last for 5 hours!

The Busch & Muller IXON IQ light uses lux to measure brightness, which is different from lumens that is used by many other light manufacturers. These are 2 different units that measure different things, so it is not possible to convert and compare these 2 units.

However, one downside is the weight. At 190 grams including batteries, it is relatively heavy compared to other front lights. Also, when switched on, it kills my wireless speedometer! Apparently it is so high-powered that it emits electromagnetic inteference that stops my wireless speedometer from receiving signals. When I place the light near the transmitter near the fork, the speedometer works. However when I place it near the computer at the handlebar, the signal disappears. Not a crippling issue, but something that you need to know if you are using the light.

The supplied clamp had a pretty poor rubber shim to fix the clamp onto the handlebar. The contact area was only 3 small areas, so in the end I took out the supplied shim and installed my own rubber shim, problem solved! 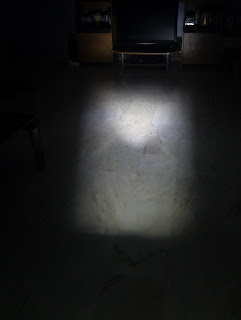 B&M IXON IQ light in high power mode (40 lux). I like the rectangular lighting pattern, no light lost to the sides! The brighter part is further away, which enables the lighting to even out when cast onto the road. 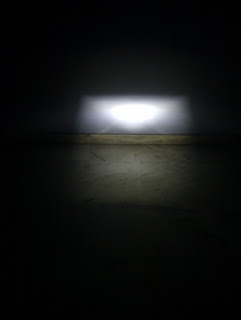 10 lux, from 2 metres away. Again, the rectangular lighting pattern is really useful. 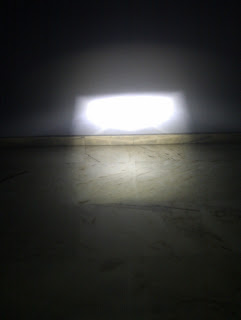 Decided to test the light outdoors at night, for a more realistic comparison! Bukit Batok Nature Park is a good place. Went to a spot where there is not much street lighting to test the lights. The photos are much dimmer than what you see with your actual eyes. 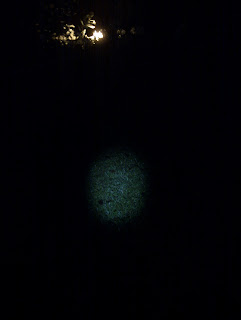 S-Sun 1W front light. A very good blinker, and is also quite bright. Beam is nicely concentrated by the lens. One of the best front lights around in terms of its small size, affordability and features. However, beam is relatively small and bluish in colour. 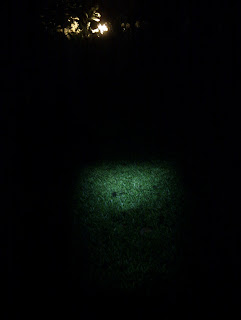 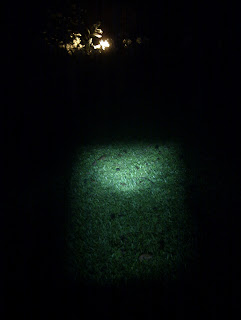 40 lux! Much brighter, with a much larger spread of light. You have to see the actual light to appreciate how bright it is!

I have no doubt that this light will light up the road even if it is pitch dark. In fact, it is so bright that it hurts the eyes to look at the light reflecting off the wall! The rectangular shape of the beam means that it lights up a path in front of you, with minimal light loss to the sides. By making the beam brighter on top, where it lights up the further part of the road, enables the final lighting pattern to be more even throughout the entire stretch in front of you.
at December 16, 2011