The drivetrain of the Bike Friday Haul-A-Day cargo bike needs to be simple and robust, and be able to shift well even under load. Due to the heavier weight of a cargo bike (even when not loaded), it is better to have some lower gearing to make pedaling and climbing easier.

Although there is a front derailleur mount on the frame, I decided not to install a front derailleur, even though it will give me a really nice gear range with a front double drivetrain. This is to keep it simple, as I think a wide ratio cassette should give me sufficient gear range for the intended purpose.

I will not be going fast on a cargo bike, what I need is good low end gearing for climbing up slopes when carrying a heavy load. As such, a gear range similar to that of a mountain bike should be quite suitable.

My Polygon Cozmic CX3.0 MTB has a really wide gear range of about 18 to 80 gear inches, with a 11-50T 12 speed cassette. Adjusting the chain ring size will shift the whole range up or down, depending on your needs.

However, it is not possible to put such a large cassette on a 20" wheelset, as the rear derailleur cage will touch the tire or the ground. Therefore, I need a cassette that has a relatively wide range, but not too big that it cannot be used on this bike.

Testing a large 11-40T cassette on the 20" wheel (Dahon Kinetix Pro), used on the Dahon MuEX, to get a sense of how it looks.

Prior to looking for the suitable cassette size, I need to first decide the rear derailleur to use. This is not the usual sequence, as normally, the cassette is first chosen (based on your gearing needs), then a suitable rear derailleur will be selected to work with the cassette. However, one of my requirements is for electronic Di2 shifting, which greatly limits the choice of rear derailleurs.


For Di2 shifting, I have a choice of either road or MTB Di2 rear derailleurs. A road Di2 rear derailleur will definitely have enough ground clearance, but it also limits the size of the cassette I can use. For example, the Ultegra RD-R8050 rear derailleur can support up to 34T cassettes (GS spec), but I don't think the gear range (1x11 speed, 11-34T cassette) is low enough for this cargo bike.

In order to have a wider gear range with a front single setup, I need to use wider range MTB cassettes, which means a MTB Di2 rear derailleur is needed. There are not many choices, with XTR or Deore XT Di2 rear derailleurs as the only options.

Rubber cover goes over the Di2 port on the RD, for improved sealing.

First and only generation of MTB Di2 RD, very similar to the top end XTR RD.

B tension screw on top, High and Low limit screws in black colour at the bottom.

Part of the Dynasys 11 drivetrain. The clutch is housed under this cover.

The grey lever turns the clutch On and Off. More details at a previous post here.

With the bottom cap opened, the clutch tension can be adjusted with an Allen key. Contrary to what some people think, it is NOT a grease port, do not inject grease inside!

Rear side of the RD, with the motor unit located at the back end of the RD.

Saver unit at the back of the RD, to prevent damage to the motor in case there is an impact.

Cage set of the RD

Cage length (pulley to pulley) is about 85 mm, which is a rather standard value. A shorter cage is better for more ground clearance, provided there is enough chain capacity.

Weighs 321 grams, which is rather heavy, but understandable due to the Di2 motor unit and the long cage. Claimed weight is 319 grams.

11-46T will give the greatest range, but I am quite sure there will not be enough ground or tire clearance with the rear derailleur cage.

11-42T and 11-40T are very similar, with only a 2 teeth difference. Gear ratio wise, they are almost the same, but the 11-40T cassette will give slightly more clearance between the rear derailleur cage and the ground/tire.

The final choice is thus the 11-40T cassette, chosen for the wide gear range, and hopefully also sufficient clearance between rear derailleur cage and ground/tire. At this point, I am hoping I can strike a balance between these two conflicting requirements.

Gears look to be evenly spaced out, with the largest 40T sprocket made of aluminium instead of steel. This is unlike the 11-46T cassette with a large jump between the largest two sprockets.

Unusual 7 sided aluminium cassette spider at the rear, which is used to improve the rigidity of the larger sprockets and also reduce overall weight.

Largest 3 gears are riveted together, and the next 3 gears as well. There are 2 cassette spiders in this cassette. The other 5 gears are made up of individual sprockets.

Claimed weight is 411 grams, while the actual weight is almost the same at 413 grams. 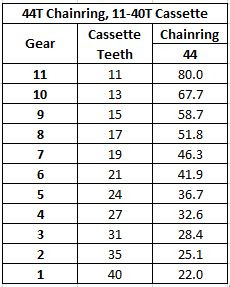 Gear combination and the gear ratios, when used on a 20" wheel with a 44T front chain ring.

As planned, the gear ratios are similar to that of a MTB. The top gear of 80 gear inches is the same as on the MTB, which should be enough, from my experience riding the MTB. The low gear of 22 gear inches is the lowest that is feasible, given the constraints of the small wheel size and the 11-40T cassette. Even if a 42T low gear is used, the lowest gear is 21 gear inches, which is practically the same. This gearing should be low enough for climbing on this cargo bike.

Dura-Ace/XTR CN-HG901 chains are used. Note that the newer pack (right side) comes with the Quick Link instead of the chain pin.

Since the chain stay is super long, at 690 mm instead of the usual 400+ mm, 2 chains are needed. I expect to use about 1.5 chains. The Dura-Ace/XTR HG901 11 speed chain is used for good corrosion resistance and best shifting performance with the Deore XT cassette.

Later on, during the actual bike testing, I noticed that there was a clinking sound whenever I shifted inwards to the low gear. Upon closer inspection, I found that this was due to the chain touching the frame during shifting, when the chain bounces around a bit.

This was totally unexpected, as I did not consider or check this at all. Luckily, the chain just manages to clear the frame with about 2 mm of margin when riding in the low gear. The touching only occurs during shifting, but not during riding. 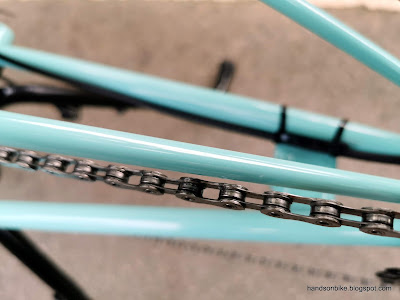 Small clearance between the chain and the frame, when in the lowest gear (44T chain ring, 40T sprocket). 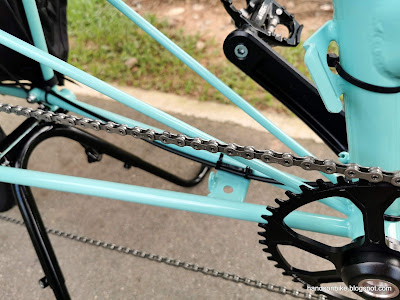 View of the overall area, where this issue occurs.

Although the clearance is small, it is lucky that there is still a bit of clearance during riding. What I did was to just paste some clear tape over the frame at the touching area, to protect the paint. Not a big issue at all, but interesting to note this limitation.

In other words, if a larger rear sprocket (>40T) and/or a larger front chain ring (>44T) is used, the chain might rub the frame in the low gear. If that is the case, either the chain ring or the sprocket will need to be reduced in size. Alternatively, the chain line of the front chain ring can be shifted outwards slightly to create more clearance.