The Fnhon Gust is different from what I have built previously, as it is a 16 inch folding bike frame, instead of the usual 20 inch bike frame which I am familiar with. Therefore, some problems and unknowns are to be expected.
However, some problems that I encountered were issues with the frame or component quality, which is unacceptable. It should not be happening, regardless of 16 inch or 20 inch bikes.
Starting with the headset, the top bearing was unable to seat in fully into the bearing cups. This is due to the frame headtube not being round enough, causing the aluminium bearing cups becoming non-round as well after being pressed in. Same as what I encountered on the Crius AEV20 folding bike.
As I did not have the headset tool with me, I had to improvise and make a DIY tool to press in the bearings. For details on headset installation, refer to this guide. 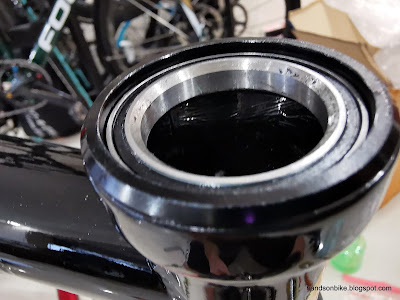 This is as far as the headset sealed bearings can go by hand, it is a tight fit. 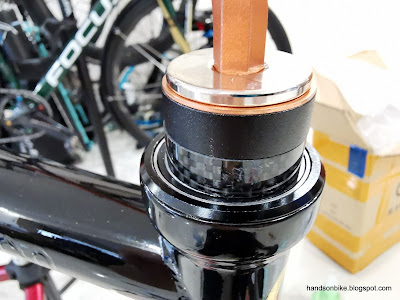 I rigged up a jig, using the fork and the compression nut, plus some headset spacers, to press in the headset bearings.
The headset bearings were quite a tight fit inside the bearing cups. This is not normal as it is supposed to be able to be installed by hand. It would be quite difficult to get the bearings out next time.
That was only the first problem! Next, I found that the handlepost could not slot onto the steerer tube of the fork smoothly. Upon measurement, I found that the inner diameter of the handlepost was slightly smaller than the outer diameter of the steerer tube.
Once again, this is a new problem to me, as I have not encountered this on the many folding bikes that I have built previously. It is a problem with the quality control, which I find unacceptable.
Luckily, I had experience solving problems like this, many years ago. On the Dahon Boardwalk, the seat clamp was too tight, and I used a similar method to remove it. 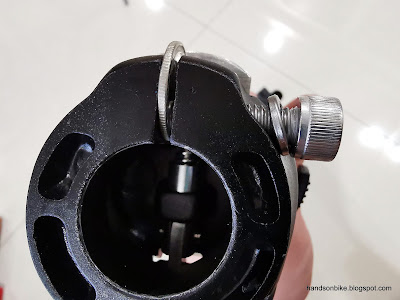 Using a coin as a metal plate, I screwed in the clamp bolt from the other side. This pushes the slot apart, increasing the inner diameter of the handlepost. 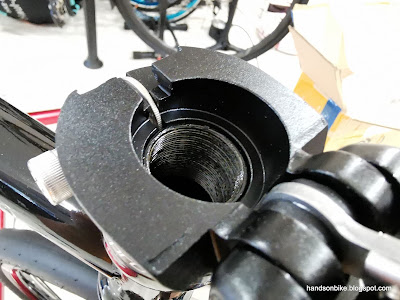 By temporarily enlarging the hole, the handlepost can fit over the steerer tube.
Once the handlepost slots onto the steerer tube, the clamp bolts can be fixed normally.
Next, the most tricky problem is with the brakes. As shown previously, there are some issues if you install standard reach caliper brakes on the Fnhon Gust.
At the front, the reach is insufficient to reach the rims. At the rear, the chain will interfere with the brake bolt at the lower gears.
One of the solutions is to change to V brakes, as there are V brake mounts on the frame. Since the initial plan was to install V brakes, I had already ordered Litepro V brakes, so I could test it immediately. 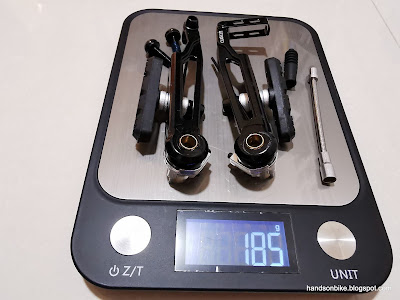 One pair of Litepro V brakes weigh 185 grams. Two pairs are needed for one bike.
When switching from caliper brakes to V brakes, the brake lever should actually be adjusted or changed, as there is a different pull ratio. For details, refer to this post which I wrote many years ago.
In short, the correct pull ratio on the brake lever should be used, so as to achieve proper brake power and brake feeling.
Luckily, the Sora brake levers that were used on this bike has a selectable pull ratio. These brake levers can be used with either V brakes or caliper brakes, instead of just V brakes like MTB brake levers. 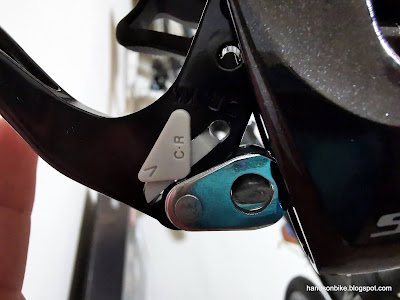 The cable hook on the Sora brake lever can be moved between two positions. The outer position for V brakes has a longer cable pull, but lower leverage.
One problem which I had expected using V brakes on the Fnhon Gust is the position of the brake pad, relative to the V brake caliper. From other pictures, the brake pad seems to be very high up the brake arm. This is not normal, as the brake pad is usually much lower down, closer to the brake caliper pivot for more leverage.
That was the reason why I chose the Litepro V brakes, because they have a very long slot for brake pad adjustment. If a normal Shimano V brake is used, the brake pad might not be able to go so high up. 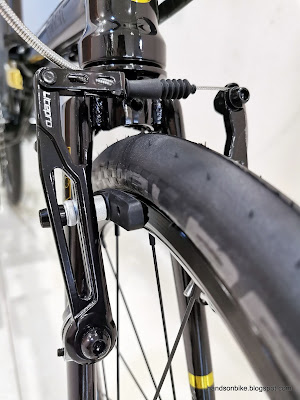 Brake pad is half way up the brake arm, instead of the usual 1/4 of the way up.
Litepro V brakes are thus recommended for the Fnhon Gust, due to the long slot for proper brake pad placement, and also a suitable arm length to clear the tires.
As for the rear, it is tricky, as the V brake mounts are located under the chainstay, making it difficult to install and adjust. 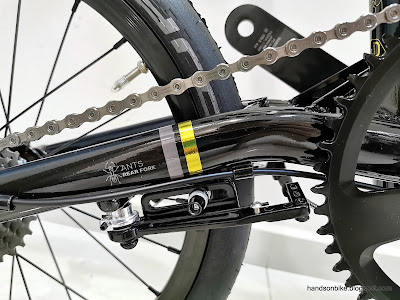 At the rear, the V brakes go under the chainstay. Brake pad also needs to be half way up the brake arm to reach the rims. 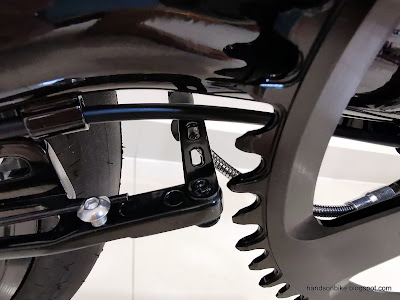 Very small clearance between the V brakes and the 52T chain ring! 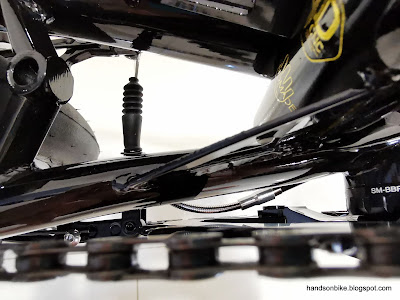 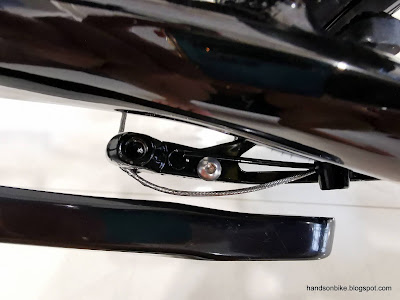 On the non-drive side, the V brakes also go very close to the left crankarm.
The rear brakes barely fit, as it is so close to the chainring and also the crankarm. Locating the V brake mounts on the underside of the chainstay is not ideal, as that area is already quite full, with the drivetrain components all around it.
In the end, the switch to V brakes was successful. However, there are many areas that you need to take note, if you build the bike yourself.
I was glad that all these issues could be solved with a bit of DIY work. Not as straightforward as it looks!
at January 08, 2021