For a cargo bike such as this Bike Friday Haul-A-Day, the frame will always be longer than a standard bike. As such, the cable housing that runs from the handlebar to the derailleurs or the brake calipers will be longer than usual.

A longer cable housing always means more friction, which can cause poor shifting performance or decrease the brake performance. Using high quality inner cables or outer casings can help, but it will always be poorer compared to an equivalent setup on a standard bike due to the extra length.

On this bike, I am using hydraulic disc brakes, which means that the hydraulic brake hose will need to be longer than usual. As already described in detail in a previous post, an extra long hose is needed to reach the rear brake caliper from the handlebars. For this case, a longer hose may result in slightly spongier brake feeling on the rear brake, but it is inevitable.

Instead of using a mechanical shifter and rear derailleur, I decided to use electronic shifting instead, as already used on many of my other bikes, such as the Dahon MuEX, Dahon MuSP, and others. This eliminates the inner cable friction caused by a longer outer casing, and ensures that the shifting performance will always be good as it is not affected by friction. As shown in a previous post, I will be using a Deore XT Di2 rear derailleur on this bike.

Testing out all the Di2 components to ensure that they are updated and work correctly, before installation onto the bike.

Initial plan was to design and 3D print a mount for the battery, and mount it behind the seat tube, similar to the Dahon MuEX and Dahon MuSP. From my experience, this location is neatly hidden by the chain rings, and is easily accessible to remove the battery for charging. 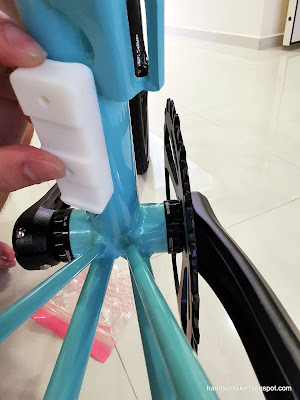 However, with the actual frame, I found that the front derailleur mount (top) and the cable stopper (below) blocks the placement of the battery mount.

As there is not enough space behind the seat tube to mount the external Di2 battery, I had to look for alternative locations for mounting the battery. The basic wiring concept will remain the same, just that wire lengths need to be adjusted to account for the different distances between the Di2 components. 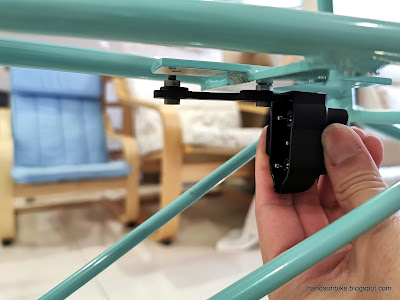 One alternative location is below the "bottle cage mount", which is located in between the seat tube and the rear section of the frame. Refer to this post for more pictures. 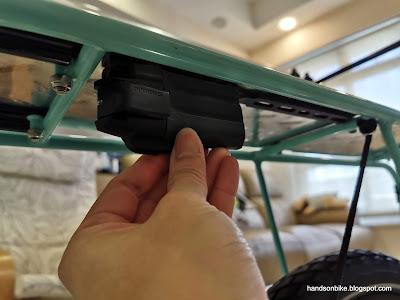 Another alternative is to secure it under the metal plate, at the rear of the frame. This area is unused anyway and can be accessed relatively easily. 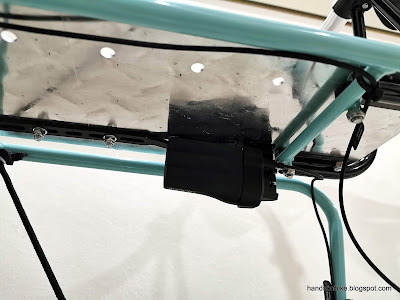 After changing to a long battery mount, it can be secured easily to the bottom of the metal plate, using the existing holes.

This new battery location seems good, but I will need to get new Di2 wire lengths in order to connect up everything. The main issue here is the long distance between the handlebar (Di2 Display) and the Junction B, which will be located beside the Di2 battery. The longest Di2 wire (1600 mm) cannot cover this distance, therefore I will need to join two Di2 wires together to connect them up.

Last time, a Junction B can be used to join Di2 wires together to extend them, but there will be two unused ports on the Junction B. Recently, a connector was created to allow the joining of two Di2 wires, while maintaining a slim joint. 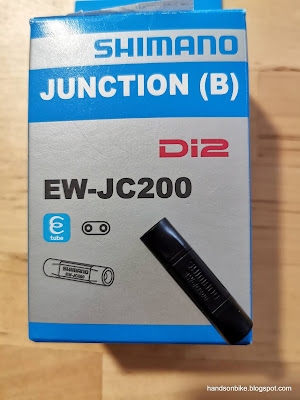 EW-JC200, which is basically just a connector to join two Di2 wires. Despite having no active electronics inside, it still costs SGD 30! 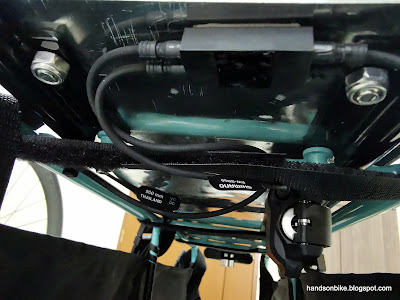 Junction B attached to the underside of the metal plate, with some strong mounting tape. As it is not heavy, this will be sufficient. 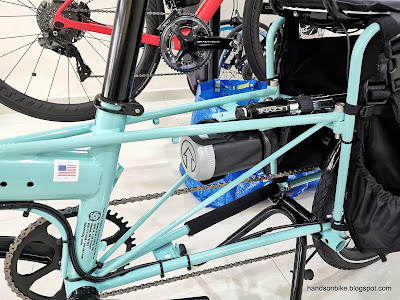 Di2 wiring runs alongside the rear brake hydraulic hose, along the non-driveside chain stay to the rear of the frame, before routing upwards to the metal plate where Junction B is located. 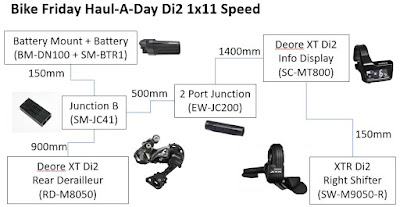 Final Di2 wiring layout on the Bike Friday Haul-A-Day. As you can see, a total wire length of 1900 mm is needed to connect Junction A (Di2 Display) to Junction B.

With the Di2 wiring installed, it means that the bike is almost completed!