Since the previous blog post, I have already tried out the new handlepost and handlebar for a few rides, and so far its working fine. No problem with the handlepost, it works great as it is much stiffer than the original adjustable one. The handlebar is also great, being light and stiff.

However, this handlepost is considered tall for me, as the handlepost height prevents me from maintaining a lower posture. It would be a good height for cyclists who are taller or prefer an upright position. 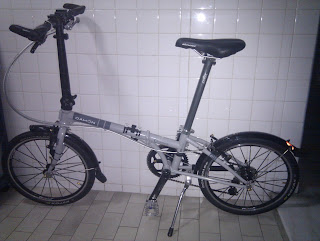 A general guide for sporty/recreational cycling is for the handlebar to be around the height of the saddle. This would allow better control and slightly less air resistance.

The cruiser/relaxed kind of set up would have the handlebar significantly higher than the saddle, such that the cyclist rides sitting straight up.

On the other extreme, the handlebar would be much lower than the saddle. This is common for time trial cycling, where the saddle and handlebar positions encourage aggressive riding. The low handlebar position with aerobars also allows the cyclist to get low and minimise air resistance.

Fantastic picture of Fabian Cancellara on his TT bike. 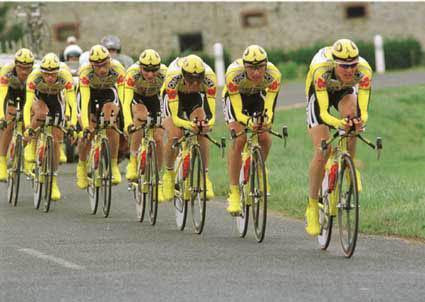 Team time trial, where the whole team works together to minimise the time taken to complete the course.


As for me, I decided to position my handlebar lower, so as to improve my riding position. At the same time, the bike must be foldable and compact. Usually these requirements are conflicting, as it is difficult to have a compact fold when you have drop handlebars or other configurations. However, I managed to get a stem for my Dahon handlepost that can alter my handlebar position. 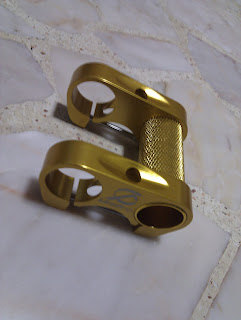 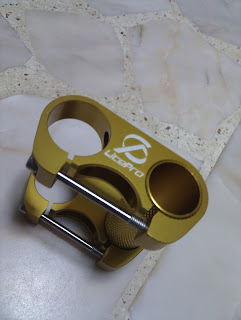 Dahon fans may find this familiar, as it looks similar to that used on high end bikes such as MuSL, Speed Pro TT, etc. The Dahon version is called the Syntace VRO Clamp, and comes in black. A similar version is shown below: 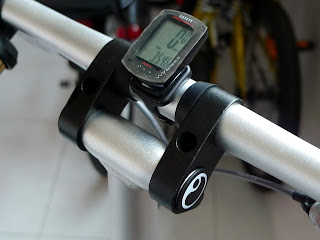 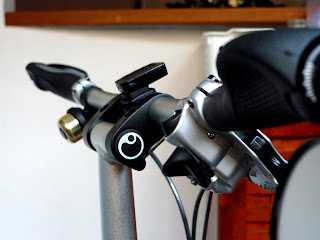 Besides the colour, the distance between the two holes on the clamp is also slightly different. The gold coloured LitePro clamp has about 1cm more distance in it. Other than that they have the same functions. 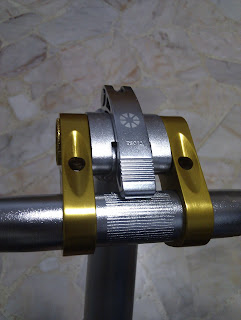 Some of the tests I made was to try twisting the handlebar around the closed handlepost clamp. Thankfully the handlepost clamp is strong enough to resist any kind of movement. Once I was satisfied with the gold clamps, I transferred them onto my current bike. In order to fix the clamps, I had to slide out one side of the grips and brake levers. 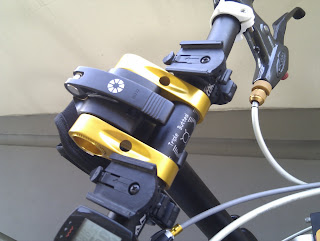 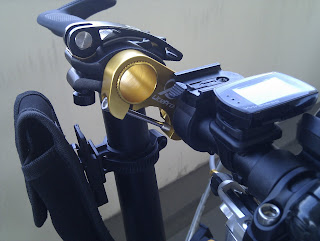 In keeping with the colour scheme of my bike, the gold and black combination is maintained. As can be seen from the pictures, the clamps puts the handlebar about 3cm forward and 3cm lower compared to the original position. The difference is quite significant despite the small increase in reach, I now feel that the riding position is more comfortable. Note that the clamp lever restricts the actual range of possible handlebar positions. For example, the gold clamps cannot be placed completely horizontal as the handlebar will intefere with the clamp lever.

For me, being able to fold the bike into a compact package is also important. After all, it is a folding bike, and if the folding is seriously compromised, it might be better getting a mini-velo that does not fold. Prior to getting the clamps, I have thought about how the clamps will affect the fold. Theoretically, the clamps should not get in the way of folding, but only by actually trying it out will I know if it folds properly.

Folding the bike with these gold clamps on is more complicated. First, the handlebar has to be restored to its default position. This is accomplished by opening the handlepost clamp and changing the object that it is clamping, from the gold portion to the actual handlebar. 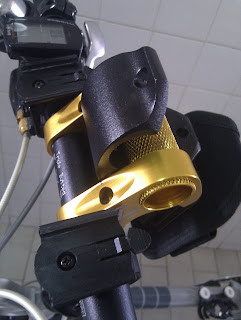 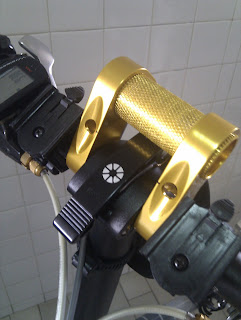 Original setup, with the handlebar in the handlepost clamp.

Afterwhich, the clamp lever is placed back and tightened slightly by twisting the nut on the other side. It cannot/need not be tight as riding will not be done in this configuration. This additional step prevents the clamp from getting in the way of the folding. 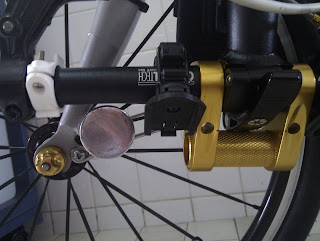 Upon folding the handlepost down, the clamp is tucked in nicely below the metal rod for the fenders. Note the small clearance between the handlebar and the metal plate used to receive the magnet during folding. 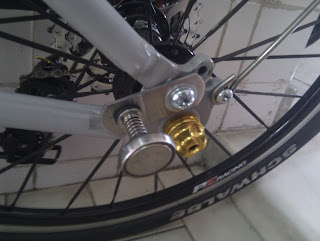 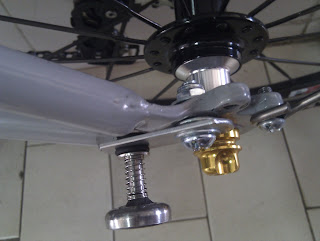 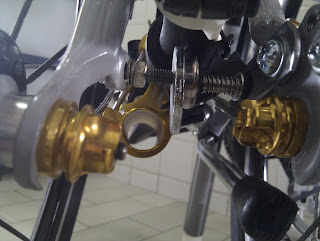 To sum it up, this upgrade is quite useful, as it allows a better riding posture. The folding is not compromised, although the time required for folding is increased by about 1 min. I guess that most people will be happy with their current handlebar setup and will not go to such an extent to add these clamps.
at November 14, 2011