Part 3: Cheap Bikes vs Premium Bikes: What is the Difference?

A lot of the time, new cyclists will complain of butt aches or sore wrists, but do you know that these can be alleviated if the proper components are used? A sore butt can be due to a number of reasons, but usually it is due to a bad saddle or a badly adjusted saddle. Sore wrists or numb hands are also relatively common, but these can be partially relieved with a well designed grip.

Let us now compare the difference in saddle, grips and pedals between the Aleoca Ready2Ride (R2R) and the Dahon MuP8!

Saddle
A good saddle will go a long way in keeping your butt pain-free and happy! With no butt pain bothering you, you will be able to enjoy riding the bike and go for longer rides.

The R2R has a generic plastic saddle, similar to those found on many cheap bikes. These saddles are infernally uncomfortable, as they are hard and badly shaped. Even for short trips, they are very uncomfortable. As for the Biologic Aria Saddle, it is one of the better saddles available. 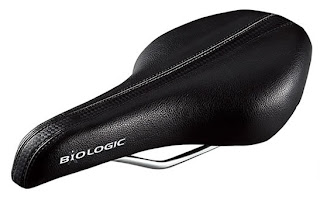 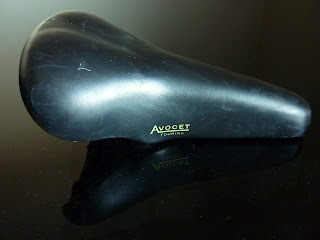 To me, it blends comfort with speed very well. It has enough cushion to prevent butt aches even when you are not wearing padded cycling shorts, but not too much cushion that you sink into it. The shape is also pretty good if you like cycling fast, since it does not restrict your leg movements unlike bigger, more cushy saddles. In addition to that, the groove down the middle will prevent numbness.

I have been using it for over 3000km, and I only recently changed it when it literally wore out (the thin mesh in the middle was starting to tear). It weighs in at a decent 380g, not very lightweight, but it is definitely way more comfortable than any cheap plastic saddle.

Throw away your cheap and nasty saddle, and pay more for a good saddle! Your butt will thank you for this.

Grips
To me, having a good pair of grips is very important, as it helps prevent hand numbness on longer rides. After using ergonomically designed grips, that are aptly named Ergon Grips, I will never go back to using those cylindrical shaped grips for anything other than short rides around the neighbourhood. 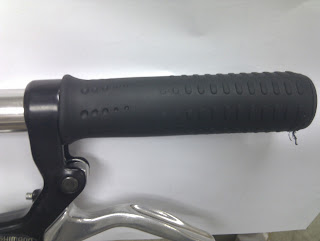 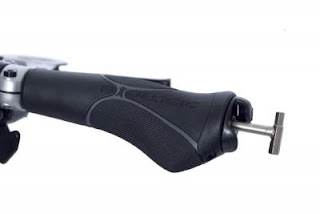 Biologic Arx Grips. As a bonus, it comes with an Allen key stored within the grip!


I find that gripping traditional cylindrical grips bends my wrist at an awkward angle, leading to wrist pain after extended riding. With the ergonomically shaped Ergon-style grips, there is a large area of soft rubber on the grip to support the palm. This spreads the weight out more evenly across the whole hand, which makes it less likely to get hand numbness. This link sums up the ergonomics very well.

The Biologic grip is fixed onto the handlebar by a clamp that tightens with an Allen key, which makes it very easy to remove the grips, such as when you are upgrading/changing your shifters or brake levers. For a rubber grip, it can be very tough if the proper techniques are not used.

Pedals
For a folding bike, folding pedals are usually provided as it allows the folded bike to be more compact in size without the pedals sticking out the side. These are usually not changed out, unless the rider wants to use a higher end folding pedal or go with non-folding pedals. 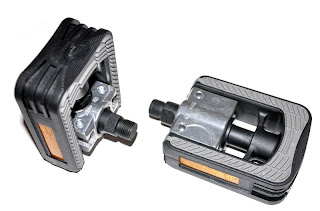 Not much to compare between the pedals, except that the Suntour pedals have a rubber surface that improves grip during wet conditions.

From comparing the contact points, it is obvious that the stock MuP8 comes with good quality grips and saddle, giving you comfort and performance. Of course, you can upgrade to these components on your own on the Aleoca R2R, but it will cost you money. It is not worth it when the Biologic saddle and grips already cost more than half the price of the Aleoca R2R!

The most common comment that I have heard, from people trying folding bikes for the first time:
"Why is the steering so twitchy, and why does the handlepost flex so much?"

Natually, this comment comes about because people compare full-sized bikes to folding bikes. Yes, folding bikes may have a more sensitive steering, but I would say it is agile instead of twitchy. Folding bikes, or small wheeled bikes in general, are very manoeuvrable (I needed a dictionary to spell that word!) in packed traffic or around crowded places. The turning radius is usually smaller than large wheeled bikes. This is largely due to the geometry of the bike frame/fork, and to a small extent, the smaller wheels. Once you are used to the more sensitive steering, you will likely find it to be useful for city commuting or leisure riding in crowded areas.

The handlepost for the Aleoca R2R and the Dahon MuP8 is a combination of 2 parts, the lower part that connects to the headset and the upper part which connects to the handlebar. The additional joint in the middle allows you to change the height of your handlebar to suit your needs.

Handlepost
Folding bikes usually have telescopic handleposts, so that you can adjust the height for folding and also to suit the rider's preferences. This makes it easier to change from a leisurely upright position or a sporty low handlebar height. 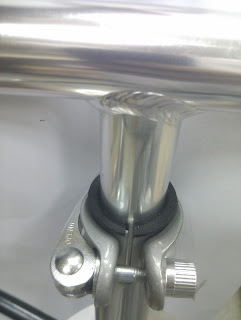 Type of adjustable height handleposts found on most folding bikes. The handlebar is welded to the handlepost. Note the rubber shim in the telescopic joint. 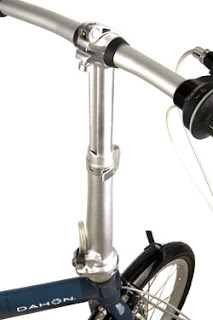 Radius V Telescopic Handlepost. Note the clamp on top which allows you to adjust your handlebar angle for folding, also also the handlepost joint in the middle to adjust the height. The telescopic joint does not have a rubber shim inside, the contact is between the 2 aluminium surfaces.

Dahon uses their patented Fusion Technology for their handleposts, which makes them much stiffer and stronger than other folding bikes' handleposts. If you compare the "flexiness" of the handlepost between the Aleoca R2R to the Dahon MuP8, you will find that the handlepost on the R2R flexes alarmingly, much more that the MuP8's handlepost. This is due to a few factors as listed below.

Some factors that affect handlepost stiffness:

A majority of the flex that is felt in the handlepost is from the telescopic joint in the middle. Therefore, to minimise flex, the connection between the upper part and the lower part should be tight to prevent play.

On the telescopic joint on the Aleoca R2R, there is a rubber shim between the 2 sections of the handlepost. This is supposed to help increase friction and ensure a good fit between the 2 sections. However, because the shim is made of rubber, it will compress and deform when subjected to forces. Because of this, instead of making the upper and lower sections fit tightly together when clamped, the rubber shim actually deforms and allow flex to develop.

In the Radius V telescopic handlepost used on the Dahon MuP8, the contact is between 2 sandblasted aluminium surfaces. These rough surfaces will grip each other tightly when clamped together, and because it is a metal-to-metal contact, there will be very little play and thus little flex in the handlepost.

It is actually cheaper to add a rubber shim in the telescopic joint, than to control the sizes of two metal tubes, making sure that the upper section fits nicely into the lower section. Sandblasting and anodizing are also costly processes that are used on Dahon's Radius V telescopic handlepost. 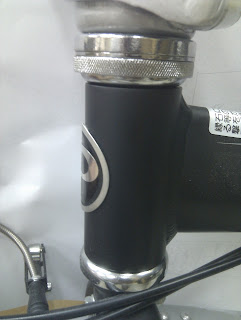 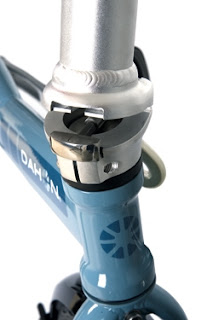 The main difference here is the design of the headset. For the Aleoca R2R, the narrower headtube diameter and the external cup headset makes the headset less stiff than the one on the MuP8. The headtube on most Dahon bikes are flared at the top and bottom to increase the diameter and add stiffness. The semi-integrated headset design, where the headset cups are partially sunk into the headtube also helps in improving stiffness by lowering the overall stack height of the headset.

After all these comparisons, it should be quite clear why the Dahon MuP8 rides much better, this is largely due to a stiffer handlepost that improves bike handling and gives the rider the confidence to ride hard and fast. A good handlepost costs more not only because of higher raw material cost or the costly manufacturing processes, but also because of the R&D work put in to design the product.

With this, I will end this Part 3 of "Cheap Bikes vs Premium Bikes: What is the Difference?" In Part 4, we will look at some of the key components of a bicycle: The wheels and tires.