Part 6: Cheap Bikes vs Premium Bikes: What is the Difference?

A useful feature of modern bicycles: The gear systems on the bike! With multiple gears, it allows you to make use of mechanical leverage to pedal efficiently on all sorts of terrain.

The answer depends on your type of usage for the bike! For the Aleoca R2R and the Dahon MuP8, they are equipped with a single chainring up front, and multiple gears in the rear. This is the most common gearing system found on folding bikes. Front gearing systems are not so common on folding bikes, because there is less need for it, unlike mountain bikes that need many gears for very varied terrain, or road bikes that seek speed with high gear ratios. What constitutes a gear shifting system? 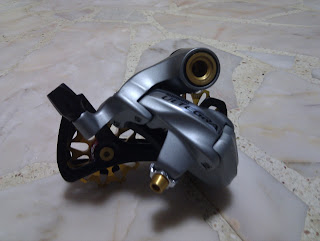 A rear derailleur. The one shown here is a gold version of the Ultegra 6700 RD. 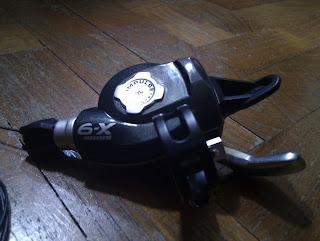 A rear shifter. This is a SRAM X9 mountain bike shifter. 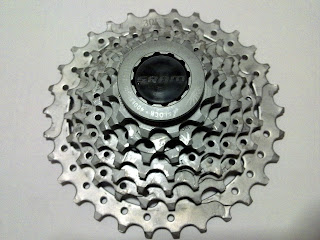 A cassette. This is a 7 speed cassette, stock from the Dahon Boardwalk D7.

A good gear shifting system will require all these components to be compatible with each other, in order to give a crisp and accurate shifting performance. Beginners usually get confused with all these different compatibilities, and the more questions they ask, the more confused they get! I shall try to explain the details in simpler terms, with minimum jargon for maximum understanding. After that, we will compare the gear systems between the Aleoca R2R and the Dahon MuP8, and see if the gear shifting system is worth the significant price difference. Let's start with the cassettes.

Understanding Cassettes
The cassette refers to the bunch of gear sprockets found on the rear hub of your bicycle. The more sprockets there are, the more speeds you have! However, you will realise that even though the width of the rear hub does not change, how can they fit less or more sprockets in the same amount of space?

There are 2 ways to fit a cassette onto the rear hub. The previous post on wheels and tires explains the differences between a freewheel and a freehub.

For a 6, 7 or 8 speed cassette, the spacing between sprockets is quite similar, but not exactly the same. The thickness of the sprockets can also differ between different models or different brands, and across different speeds. Even so, the wide dimension tolerances means that they can use the same chain without big issues. One way to think of it is to imagine one sprocket + spacer as one layer. 6 speeds mean 6 layers, and 8 speeds will mean 8 layers. 8 layers will be thicker/wider, and thus the cassette width for an 8 speed cassette is more than 7 speeds, which in turn is more than that of 6 speeds. 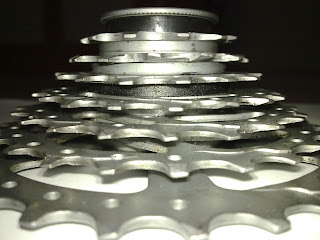 Side view of a cassette. There are 7 sprockets here, notice the spacers between the sprockets.

Now, if you have a 6 speed cassette, most likely it fits onto the bicycle rear hub with a thread-on freewheel system. As for 7 or 8 speeds, it can come in freewheel or freehub type, but the more common type is freehub.

Confused so far? More to come!

Now, let us look at 8, 9 and 10 speed cassettes. As the number of gear sprockets increase from 8 to 9 to 10, it is not feasible to keep adding more "layers" and making the cassette even wider. Instead, the layers are made thinner, so that you can fit more layers into the same amount of space!

Therefore, you will find that a 9 speed cassette actually has the same overall width as an 8 speed cassette. Both will fit on the 8 speed freehub with no problem. The difference here is that each spacer and sprocket on the 9 speed cassette is slightly thinner than the 8 speed version, and the total difference allows 1 additional gear sprocket to be added within the same cassette width. In some cases, the sprocket thickness may be different, and the overall stack height is compensated with different spacer thicknesses. Confusing, I know. 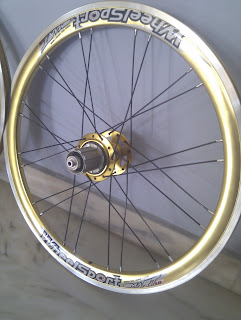 An 8/9/10 speed compatible freehub. A 7 speed freehub would be slightly shorter.

Because of these different sprocket and spacer widths, the recommended chain for 8, 9 or 10 speeds are all different. These will be explained in the later part of this article, when the drivetrains are analysed. 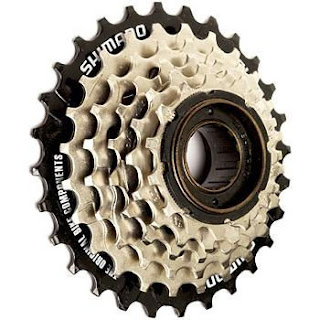 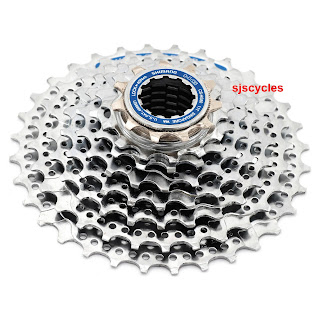 The 6 speed cassette has 2 less gears than the 8 speed cassette found on the MuP8. This means that most likely the gear range for the Aleoca R2R is less than the MuP8. Also, with less gears to span the gear range, this will make the jumps between gears quite large, which  makes it difficult to find a comfortable gear to pedal in. You will likely find the selected gear to be too low or too high to pedal at a comfortable cadence.

A Shimano Hyperglide cassette will have specially profiled sprocket teeth and wall profiles to help the chain transit between gear sprockets smoothly and quickly. Also, the nickel plated surface will be tough and hardwearing for longer durability. A good cassette's value lies in its smooth gear changes and durability, and it is worth paying more to get a high performance cassette.

Gear Shifter
A good gear shifter is very important in ensuring quick and accurate shifts. When you twist a grip shift, it pulls a fixed amount of gear cable, which actuates the rear derailleur to move the chain. This precise amount which the cable is pulled is carefully controlled, in order to shift gears accurately. This is why we can have an indexed shifting system, where each click moves the chain accurately to the next gear. 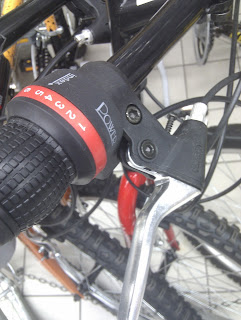 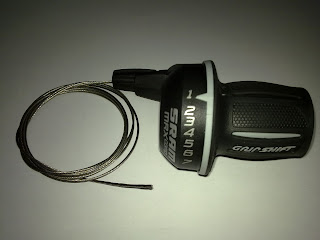 SRAM Twist shifter. The one on the MuP8 is similar to this but is 8 speeds.

A well designed gripshift will require less effort to twist and change gear, and will also retain its accuracy over time. If you compare the shifting performance of the Aleoca R2R to the MuP8, you will find the MuP8's gear shifting to be much quicker and crispier, without the annoying sound of the chain rubbing against adjacent sprockets. A good grip shift does not cost much, but is crucial if a good shifting performance is desired.

Theoretically, the number of speeds that a rear derailleur can achieve is not fixed. The movement of the rear derailleur is not indexed, it just moves according to how much cable is pulled by the shifter. Which is why we can find 8 speed rear derailleurs being used for 9 speed systems or the other way round with no issues. You can use a 10 speed rated Ultegra RD with an 8 speed cassette and shifter. The compatibility issue is usually with the width of the cage, where wider 8 speed chains may not fit nicely through a narrow 10-speed-rated cage. 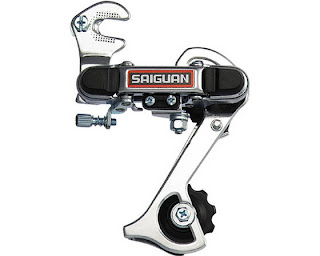 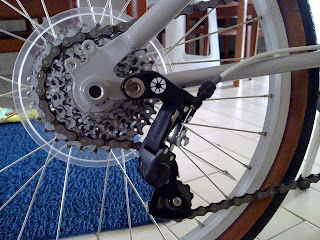 Dahon Neos 2.0 rear derailleur. Quite unique because it is mounted in front of the rear axle. 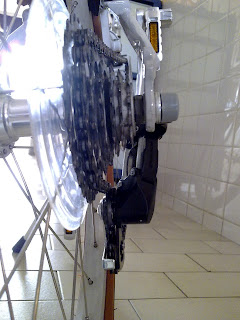 See how well it tucks away under the axle, so that it does not stick out to the side.

As you can see from the link above, the Dahon Neos RD is really ideal for small-wheeled folding bikes. It helps to tuck away the RD, preventing it from damage. Not only that, I personally find that it performs excellently, with crisp and accurate gear shifting.

A good RD will have a rigid construction, so that it does not bend or become misaligned when under spring tension or cable tension. It will also need to pivot smoothly when it is actuated. This enables it to track the sprockets accurately, which helps improve and quicken gear shifting.

Nevertheless, the performance of the shifting system on the MuP8 is definitely better than that on the Aleoca R2R, and it may be worth the investment if you like smooth gear shifts that are fast and accurate.