First day of Tern Bicycles being launched in Singapore, and where else to join in the action but at MyBikeShop? Here is a quick and close up look at the Tern Bicycles that everyone has been waiting for. If you are a fan of Dahon bikes, you will naturally take a liking to Tern Bicycles, which look and perform similarly, but with some little subtle differences...

And here are some delicious pictures for you to drool over! 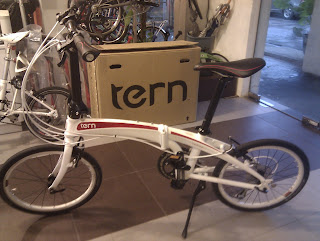 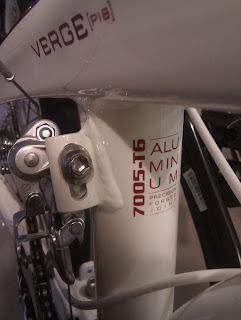 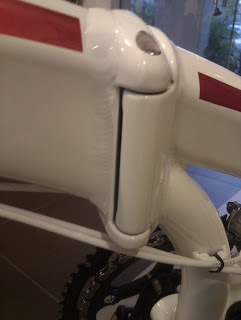 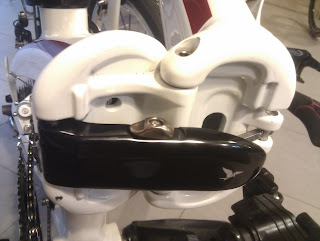 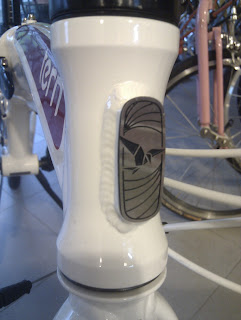 Head badge with the Tern logo. Remove to install your luggage truss! 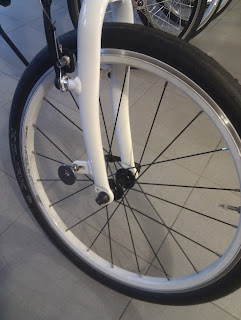 White Kinetix Comp rims blend in well with the frame. However, any dirt will show up easily... 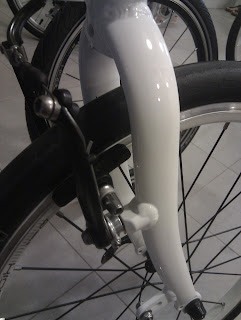 Front V brakes mounted on the rear of the fork, used to improve the routing of the brake cable housing. 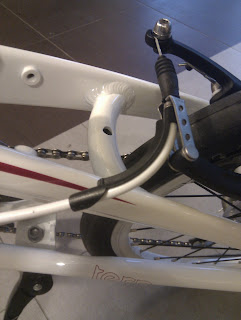 Instead of having a brake noodle to guide the brake cable, a plastic sleeve is used instead to curve the brake housing itself, simple and elegant solution! 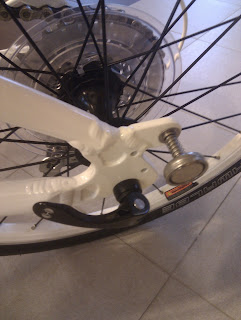 Rear magnetic catch is mounted on an external tab protruding out from the rear of the bike frame.


And now for one of the most important part of the folding bike, the folding handlepost! Tern claims that it is stiffer and stronger than its predecessors, lets see how it looks. 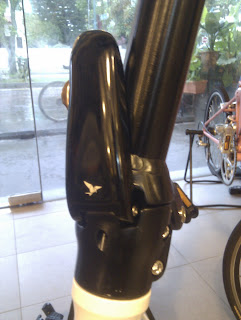 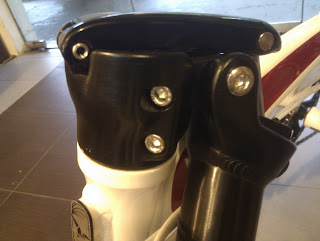 Handlepost when folded down. Latch rests nicely against the joint without protruding out.

Notice the significant distance between the hinge of the handlepost joint and the base hinge of the latch, much larger than the existing handleposts used on Dahon bikes. This essentially makes the joint wider and larger, improving stiffness! 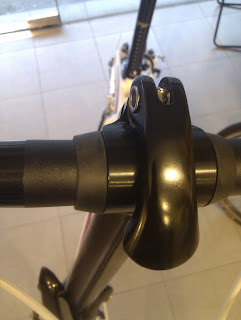 Top latch on handlepost that allows you to rotate the handlebar.

What I noticed for the top latch is that it is very different from the kind currently used on Dahon bikes. On the Dahon bike handleposts, the top latch has a hinge which opens up, allowing you to just remove the handlebar without sliding it out from the side.

However, for this Tern design, it is basically a C-clamp, and to install the handlebar you have to slide the handlebar in from the side. Which means that you can only install straight handlebars. It is not possible to install bullhorns or drop bars! This is a pity, as the Verge P18 is a good candidate for this kind of upgrades. Of course, there is the Verge X30 if you like bullhorns... 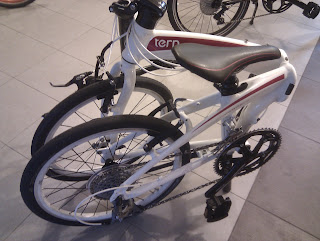 The Verge P18 when folded! The folding is similar to current Dahon Vector bike frames, which folds using the N-fold technology.

Overall, the Verge P18 looks like a great bike that can do it all. Too bad I didn't get the chance to try out the bikes yet, it would have been great to see whether the Tern bikes really have greatly improved stiffness!

Other things that I noticed on the Tern Link C7 and the Link P9: 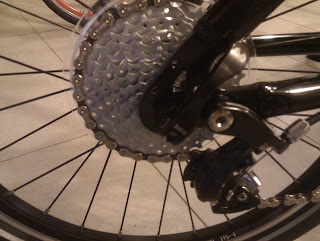 The Link P9 has no external gear hanger which allows you to use your own rear derailleur. The stock Neos rear derailleur is pretty good, and the bike is already 9 speed, so you may not want to upgrade. However, I feel that this subtle difference may surprise some people when they try to upgrade their bikes! At least for the Dahon Vitesse D7 or the MuP8, there is an aluminium dropout piece that you can change to have a rear gear hanger. But the Link P9 frame does not have any provision for a DATT rear derailleur. 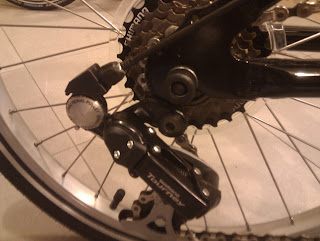 Rear dropout on Link C7. Comes with a gear hanger for you to install your preferred rear derailleur!

It has been an interesting and exciting trip to MyBikeShop. Will update with more juicy details when I finally get to try out the bikes!

Went to try out the Verge P18 today! The Verge P18 is a great bike that can do it all, very similar to the Dahon Vitesse P18. It has premium components, has double chainrings for steep hills and also for speed, and it is equipped with flat handlebar road bike components on it.

Took the Verge P18 out for a spin, and I was quite impressed by it. During testing, I stood up to pedal hard, I pulled and pushed hard on the handlebar, and basically tried to flex the frame. All this hard work just to test the stiffness of the bike!

However, the more obvious difference here is the stiffness of the handlepost. In another blog post, I compared the handleposts of an Aleoca Ready2Ride to that of a Dahon MuP8. The handlepost of the Dahon MuP8 is found to be pretty good, much better than those found on entry-level folding bikes. That Radius V handlepost is already quite stiff, but there will still be some noticeable flex when pulling or pushing hard on the handlebar. We have always thought that flexy handleposts are a part of folding bikes, until now...

The new Physis Handlepost on the Verge P18 is beyond awesome! With the massive joints and hinges, together with multiple patented technologies, the stiffness of the new handlepost is every bit as good as they claim. Even when standing up to pedal or wrestling hard with the handlebar, there is practically no flex at all! As hard as I tried to flex it, it does not yield and the stiffness virtually feels the same as those on a full sized bike. If you are a powerful rider who likes putting on power through the handlebar, this Tern handlepost will handle the abuse you throw at it. Even for me, who is using a Dahon one-piece handlepost, this new Physis handlepost made me go wow with its excellent stiffness and strength.

Email ThisBlogThis!Share to TwitterShare to FacebookShare to Pinterest
Labels: Tern