Part 4: Cheap Bikes vs Premium Bikes: What is the Difference?

As stated in the Bicycle Maintenance book: "Wheels and tires, without which there would be no bicycle."

That is so true, as the word bi-cycle essentially means on two wheels. During normal usage of a bicycle, the only part of the bicycle that touches the ground would be the tires. Also, the wheels and tires are some of the many parts of the bicycle that rotates, and they are the components that have the biggest impact on rolling resistance.

Before we move on to the wheel and tire comparisons, you may want to start with previous parts of this article.

Let us move on to the comparisons, between an Aleoca Ready2Ride and a Dahon MuP8!

Wheels
The wheels can be considered the core of the bicycle. It is the component that has the biggest impact on the ride quality and speed. With a good pair of wheels, you will be able to go fast and cruise longer with less effort. However, it is also one of the priciest single component on a bicycle. For a decent pair of 20" wheels, it can easily cost a few hundred dollars.

For me, the wheels can be split into 2 major parts, the hubs and the rims. We shall assume that both the bikes use similar stainless steel spokes. 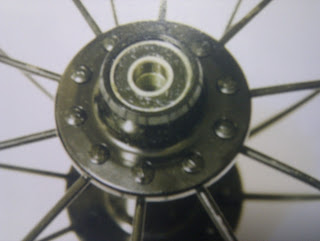 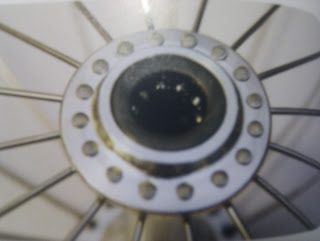 Cup & cone bearings are simple to service and maintain, but their sealing is usually poorer than cartridge style bearings. Cup & cone bearings can also be very smooth-running, but the bearings used must be of high quality (very smooth and round) and the cones must be well machined to very tight tolerances. Shimano is one of the few bicycle wheel manufacturers that still use traditional cup & cone bearings for strength, and are able to maintain the smooth running of the wheel hubs.

A bad cup & cone bearing hub is easy to detect. When spinning, there is noticeable drag and it will feel lumpy or notchy when you spin the wheels. Sometimes it is only because the hub is not adjusted properly, but many times, especially on lower end wheels, this is due to the poor quality of bearings and cones used.

In this case, the Kinetix Neutron hub of the MuP8 is far far better than the hub used on the Aleoca R2R. The Kinetix Comp wheelset used on the MuP8 is one of the most value-for-money 20" wheelsets available, especially with the extremely smooth running front hub. 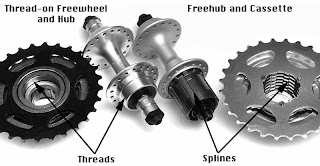 Both the rear hubs use cup & cone bearings. However, the similarity ends here. As seen above, the method and construction that is used to attach sprockets to the rear hub is vastly different. The Aleoca R2R is a 6 speed bike which uses a thread-on freewheel on its rear hub. Freewheel hubs are much cheaper than freehubs and the number of sprockets possible are very limited. Most freewheels available on the market are 6 or 7 speeds, with very rare 8 speed freewheels.

For the cassette freehub used on the Dahon MuP8, it has splines that enable the use of a cassette. The freehub spacing used for 8, 9 or 10 speed cassettes are similar, thus the potential for upgrade is there! Also, because of the construction, the bearings in the freehub system can be spaced further apart on the axle, improving the rigidity of the rear wheel.

Because of its better performance and upgradeability, the freehub found on the rear wheel of the MuP8 is a much better system than the R2R's freewheel system. Just to reiterate, the wheels are the core of the bicycle, and it is worth paying more to get a better wheelset that rolls well and lasts long.

Rims
The rims are a critical part of the wheel. For a wheel to roll properly, the rims have to be trued, such that they are as round as possible and are not twisted in anyway. By adjusting the spoke tension, different parts of the rim will be pulled to a different extent towards the hub, and the ultimate aim is to make the rim stiff and round. If V brakes are used, it is very important to have nicely trued wheels in order to have brakes that perform predictably and consistently. 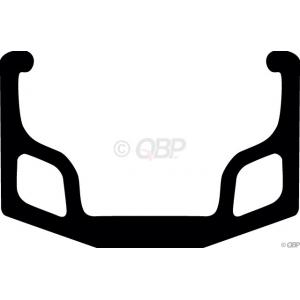 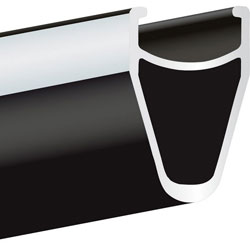 Kinetix Comp rims are decent mid-range rims that are relatively lightweight and strong. It is worth paying more for a decent set of wheels in the first place, as these wheels are going to be used a lot, and can be very pricey if you decide to change out your wheels later on.

Tires
The bicycle tires will greatly influence the comfort and speed of the ride, much more so than the frame or other components. A good fast tire will be lightweight supple and absorb little energy when it rolls, preventing efficiency losses due to tire deformation. On the other hand, a tire meant for durability will be heavier, tougher, and probably thicker due to multiple layers of puncture resistant material.

For an immediate improvement in speed, the easiest and most effective way would be to change out the tires, and get slim road tires that roll fast. Changing the tires from a stock Kenda 1.75" tires to the fast Schwalbe Durano 1.1" tires will give you a significant speed improvement that can be easily felt. 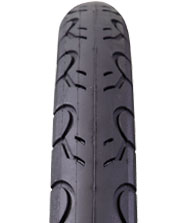 Schwalbe is well known as an aftermarket tire brand, that produces excellent tires that are lightweight, with low rolling resistance and good puncture protection. Most Schwalbe tires come with layers of Kevlar underneath the tread of the tire that helps to prevent sharp objects from poking through the tire. It is very effective at stopping small sharp objects such as gravel or thorns from puncturing your inner tube.

These Marathon Racers also come with a reflective sidewall that can increase your side visibility, plus it looks cool too! However, Schwalbe tires do not come cheap, as a single Marathon Racer tire can cost $40.

Based on the price of Schwalbe tires, it is no wonder why a Dahon MuP8 costs much more than an Aleoca R2R. The tires already take up a significant portion of the price difference.

After comparing the wheels and tires, it is obvious that the Dahon MuP8 uses much better wheelset components than the Aleoca R2R, which is why it costs significantly more. It can be troublesome and expensive to upgrade wheels and tires later on, which is why it is advisable to get a decent wheelset in the first place. If you don't plan to upgrade, the cheaper wheelsets may be good enough for leisurely rides, but if you forsee yourself upgrading the bike, it is much better to get a 8/9/10 speed compatible wheelset.